This report is about more than an air rifle. It’s about an entire shooting program called the Student Air Rifle Program, or SAR. SAR was developed in 2013 by the Missouri Youth Sport Shooting Alliance (MYSSA) as a standardized way to facilitate an introduction to school-aged youths, the lifetime sport of target shooting. Think of this as similar to the NRA Marksmanship program that reaches over one million kids each year, except SAR has trimmed the cost and operates under less formal rules. SAR sees itself as a feeder to the more formal program, which culminates in the Olympics.

The most radical aspect of SAR is it is held in both public and private schools. It has a curriculum, standardized equipment, safety protocols and range commands! The shooting programs that once existed in this country under the auspices of the NRA and JR ROTC have been brought back into schools. This is a success whose impact is potentially enormous!

SAR was developed along the lines of the highly successful National Archery in the Schools Program (NASP) that started in 2002 and now is found in over 14,000 schools in 47 states and 4 countries, involving 2.2 million students each year! SAR dovetails with NASP as a next logical step.

I will try to weave the SAR into the remainder of this discussion, but this report is focused on the rifle they use — the Umarex Embark. This rifle is now available from Pyramyd Air. Umarex was initially only selling them directly to keep the price as low as possible, to support the SAR program at a family-affordable rate, but Pyramyd Air now sells the rifle directly.

The Embark is a breakbarrel single shot spring piston rifle with a muzzle velocity of (an advertised) 510 f.p.s. It weighs just over 5 lbs. and is 40 inches long. It is designed for children in grades 4 through 12 grades and the cocking effort of just 17 lbs. means it can be manipulated by all of them without outside assistance.

The low velocity means schools can use a ballistic curtain for a backstop instead of more costly pellet traps. SAR uses only lead-free pellets, so there is no concern for lead dust or particles. That eliminates the need for costly air filtering and lead handling concerns. At the low velocity of the Embark those things are not an issue anyway, but public knowledge of lead and pellets is so misdirected that the use of lead-free pellets was a wise choice. Cleanup is done with brooms and dustpans!

This is a youth rifle. In fact, it bears a striking resemblance to the Ruger Explorer on which it is based. But there are important differences. In 2015 the program used the Explorer to test the viability of the equipment for SAR and many recommendations were received for improvements — particularly the sights. The students wanted the fiberoptic front sight to be replaced because it wasn’t precise enough. They also wanted a better rear sight that was easier and more precise to adjust. 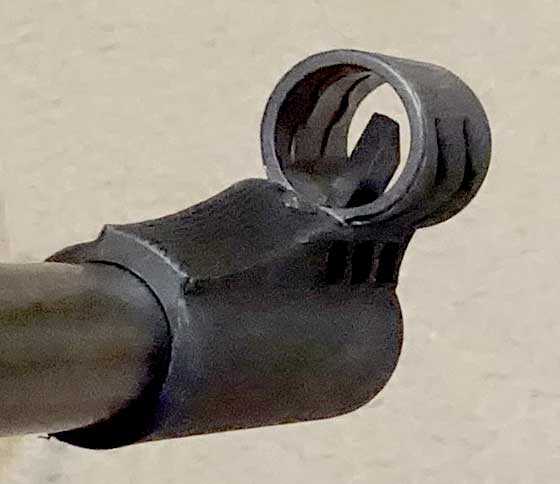 The front sight is a plain black post that’s suitable for target use. The hood reduces reflections and protects hands when cocking.

The Embark has a hooded front post that is plain and squared at the top. The rear sight is also upgraded from the Explorer’s rear sight. The sight is adjustable in both directions with click detents that can be felt and, in the case of the windage knob, heard. 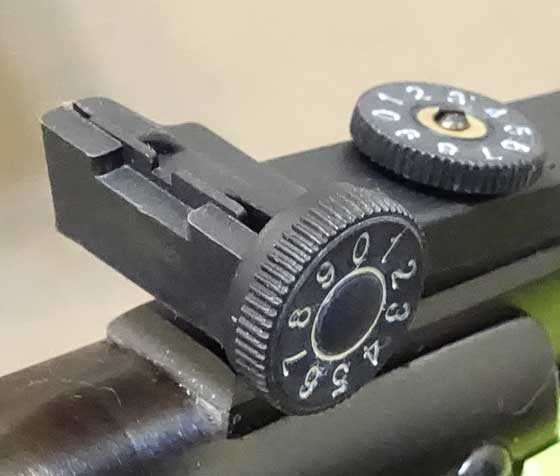 The shape of the stock appears to be the farthest thing from a target rifle stock, but when shouldered it starts making sense. The pull is bang-on 12 inches and the stock line is straight. It doesn’t drop as it goes back to the shoulder. That supports an offhand hold the best of all.

The pistol grip is vertical, as a target grip should be. The comb doesn’t adjust, but the straight stock puts it up where most shooters will want it. The offhand shooting position is one where the head is very erect, and it is no strain to place the cheek on this comb.

The butt pad is curved rubber. It’s soft enough to grip the shoulder but there is no adjustment, again to keep the costs down.

You will note the section of the forearm that drops down. On the Embark that provides the perfect place for your off hand, with the elbow supported on the hip or chest. It brings the sight line of the rifle up in line with the eyes.

The color of the stock was chosen so the Embark would stand out from other air rifles. In pictures of SAR competitions, every shooter has the same type of rifle. This was done to make the program affordable, to level the playing field and to keep it from becoming an equipment race.

The trigger is two stage. Stage two is long and creepy and there is no adjustment, as might be expected in a rifle that retails for under one hundred dollars.

The Embark has an automatic safety that protrudes from the rear of the end cap every time the rifle is cocked. It can also be applied manually at any time. 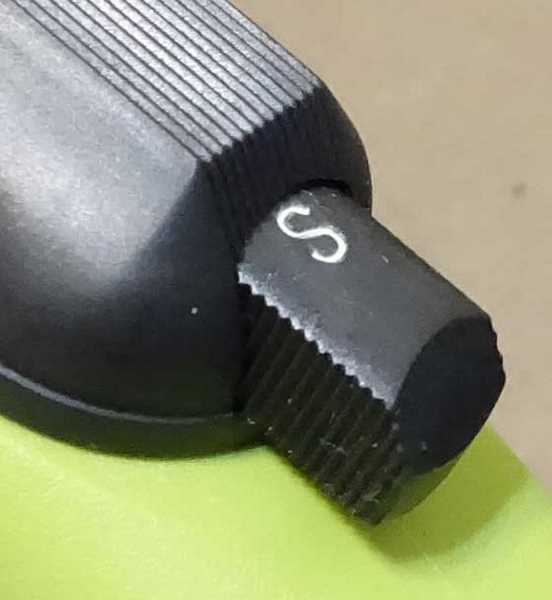 The safety comes on automatically every time the Embark is cocked.

Fully 16 percent of the kids who participated in the SAR pilot program had never shot anything before. The last thing this program needs is unsafe equipment in the hands of children unfamiliar with gun safety, so an anti-beartrap mechanism is also incorporated into the action — making it impossible for a barrel to slam shut on small fingers during loading. I think that is wonderful, but I hope the children are also taught to never let go of the barrel while they load.

Where is it made?

The Embark is made in China, similar to the Ruger Explorer. It is very advanced for a Chinese airgun — even for a higher-end Chinese sporting rifle. The finish is plain and matte, which is what you want to see on a target gun

There is so much I want to tell you about this air rifle, but I’m holding back until we get to the proper section. For example, I report both the cocking effort and the trigger pull in Part 2, when velocity is tested. But I will tell you this is a youth spring rifle and that means it’s easy to cock and the recoil is low. The powerplant is generally quiet, but I think some things remain to be done. There is a trace of buzziness that could be eliminated entirely with Tune in an Tube, and I plan to not only do that, but to chronograph its affect on velocity, if any.

This is a target rifle for offhand shooting at 10 meters. The course is 30 shots, so a score of 300 is possible. I plan to test the rifle at 10 meters and see what kind of accuracy can be expected, but in a first match a top score of 268 was achieved. Shooting offhand with lead-free pellets, that’s very credible.

As you know, I like youth air rifles a lot. So I’m excited to conduct this test for you. I can’t wait to get going.