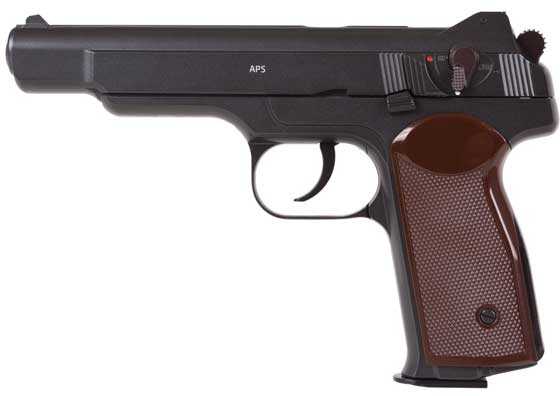 Today we start looking at the Gletcher Stechkin APS BB pistol. Let’s define up front what this is and what it is not. This BB pistol is an all-metal full-sized BB pistol that operates on CO2. It is both double and single action, so the slide blowing back cocks the hammer for the next shot. This is a true semiautomatic BB pistol with a two-stage single action trigger that’s reasonably crisp.

The Stechkin was a sidearm of the Soviet military in the early 1950s, but proved too heavy and cumbersome (not to mention too expensive to produce) to be issued to regular combat troops. It was resurrected to be issued to elite forces when I was in the Army in the 1970s. Then it was issued to special troops like Spetsnaz commandos. It is a select-fire (both semiautomatic and fully automatic) pistol, chambered for the 9mm Makarov cartridge. That cartridge is considered adequate in Europe and the former Soviet Union, but being roughly equivalent to the Western .380 ACP, it is weak side in the eyes of the U.S. military and law enforcement communities.

The Soviet Stechkin firearm seems strange and exotic to Americans.

Most full-auto handguns are uncontrollable and therefore a joke in practical terms. The Stechkin may be an exception, since it fires such a relatively low-powered cartridge, plus it is issued with a wooden shoulder stock. The handgun is also very large, heavy and hand-filling because of the 20-round double stacked magazine. I have watched You Tube videos of these guns being shot in bursts, and as long as you keep the bursts to three shots, the pistol doesn’t climb in recoil. Just watch out for the slide, because it comes back three times the length of the cartridge, for greater recoil reduction. If you choke up on the shoulder stock too much, you will get the slide in your eye!

The BB pistol slide doesn’t come back nearly as far as the firearm slide. Still, the Gletcher Stechkin BB pistol does not have a select-fire capability.

BB pistol is not full-auto!

The Gletcher BB pistol I am testing is not full-auto. That is not obvious to some folks who buy the gun for just that reason and are then disappointed. The selector switch on the left side of the slide goes forward for safe and down for semiautomatic fire, but it does not rotate back and up to the ABT marking that is for full-auto. You need to know that before you buy the pistol. 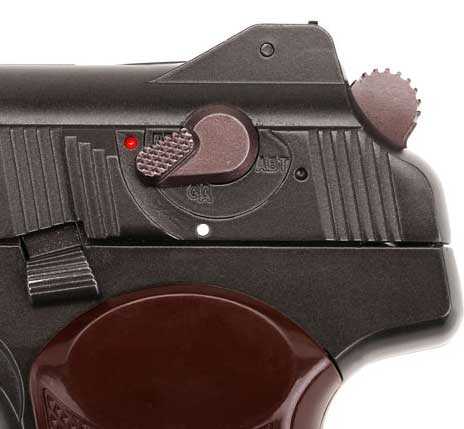 The selector switch goes to safe and fire, which is semiauto, but it does not turn to full auto (ABT).

Probably the reason it isn’t obvious to many folks is because this is a Stechkin. It’s known for being a full-auto handgun. It would be like a Thompson submachinegun that isn’t full-auto. Come to think of it, though, those do exist in .45 ACP. I used to own one!

Ex-military guys my age who were in combat arms remember the Stechkin as being full-auto. At the time we had no idea that a full-auto pistol wasn’t all it was cracked up to be. We just thought it was cool, so naturally we all wanted one. I think that latent desire is what causes the confusion now.

This handgun is BIG!

When you look at the pictures the Stechkin looks like a pocket pistol. Maybe it’s a little long, but it still looks small. Hold one in your hand though, and you quickly discover this is a large handgun. Not as large as the big Desert Eagle pellet pistol that used to be available from Umarex, perhaps, but it dwarfs a standard M1911/1911A1. 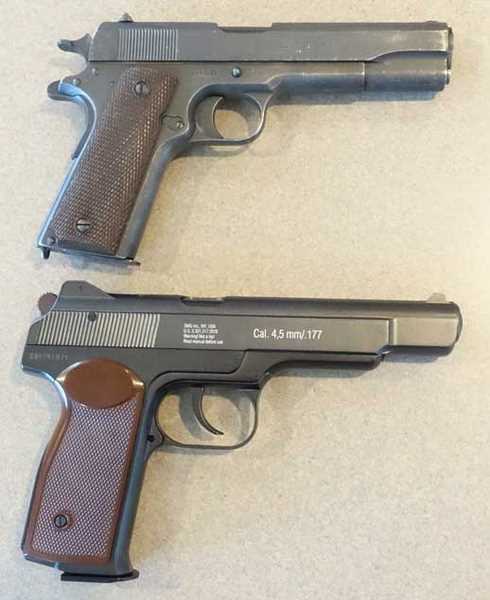 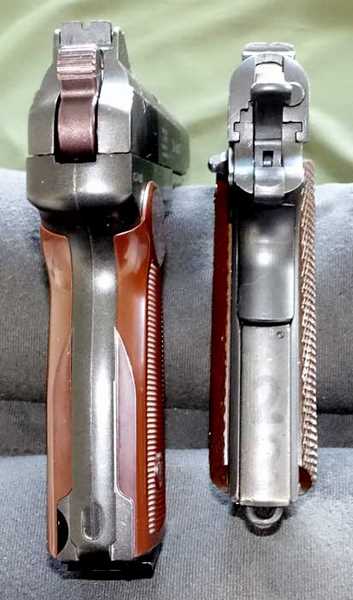 This view from the back shows the real difference in size. The Stechkin’s wide grip is what makes the difference, plus the whole pistol is taller. Notice the Stechkin grip is cut for a buttstock iron.

The rear of the Stechkin grip frame appears to be cut for a buttstock iron. Of course the metal in this pistol is too soft for such a feature to be practical, so this is just for decoration I think. I did find a picture online of a Gletcher APS pistol with a buttstock, but I think the picture was actually the firearm.

The pistol is made in Taiwan and does bear a strong resemblance to an airsoft version that’s also marketed by Gletcher. This seems to be a trend, where airsoft guns are turned into BB guns. Some of them, like this Stechkin, are very realistic.

The 22-shot BB stick magazine fits inside the pistol grip and has the clumsy European-designed mag release that’s located at the bottom rear of the pistol grip. This release is different, in that it’s a button that you press in to drop the mag, but it still takes two hands to remove the magazine. The 1911-style release button on the left of the frame is much faster, though admittedly a problem for lefties.

To install a CO2 cartridge the left grip panel is removed. A separate large Allen wrench is needed to twist the tensioning screw, and it is supplied with the gun. Don’t misplace it. 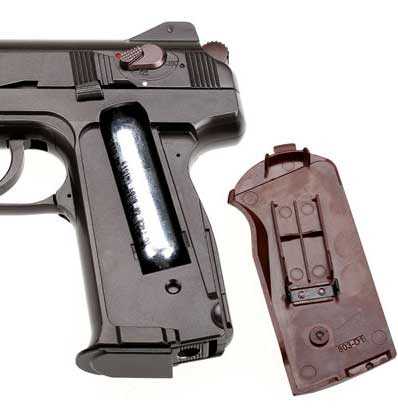 The CO2 cartridge goes in the left side of the grip.

The front sight is a modified Patridge post that appears to be mounted on a dovetail, but that’s just cast into the metal. It doesn’t move.

The rear sight is the strange one. Windage is fixed, but elevation adjusts to 4 positions — 25, 50, 100 and 200 meters. That’s a copy of the firearm sight of course, and 200-meter shooting with a cartridge this weak is a pipe dream, but at least the BB pistol stays real to the firearm it copies. And, it gives you some elevation options. 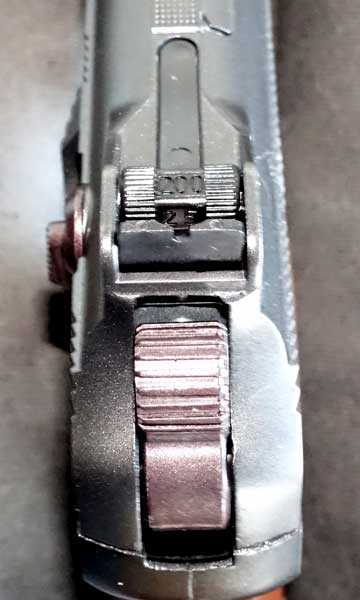 The pistol is finished matte black over all the metal. The grip panels are a reddish brown that appears very close to the grip color on Soviet-bloc Makarov pistol grips.

That’s all for now. Velocity testing will be next and this pistol is advertised to get about 360 f.p.s. with what I assume are steel BBs. Until then.