How to make a spring-piston air rifle shoot smooth: Part 1

Today’s report is a bit strange. It could be considered one about an historic airgun, because the gun I will talk about is no longer made. I decided instead to put it into the modern section, for reasons I hope will become apparent.

It also could be considered as an open letter to airgun manufacturers, because it deals with an air rifle many shooters potentially want, though most of them don’t know it until they actually shoot the gun.

Finally, it could be considered as a chastisement of some airgunners who think that more power is the only path to happiness with an airgun. Why don’t I just tell the story and let you readers decide?

A few weeks ago reader Siraniko and I had this conversation:

”B.B. Pelletier,
The results you’re getting from the Umarex Throttle suggest that it is the StopShox that is causing the flyers. Is there an equivalent air rifle in Umarex’s inventory that does not have a StopShox installed? That might make a better comparison that would give a conclusion to this problem.
Siraniko”

“Siraniko,
I don’t know of anything equivalent in the Umarex lineup that has similar features, but your question does suggest a blog. There have been airguns that did what the Throttle attempts to do (other than the power) and, in terms of performance, they were stunning. Time to get out some obsolete stuff and show the world what’s possible again.
B.B.”

It began in 2009, when Paul Capello and I started the television show American Airgunner. We needed content for the show, and the Crosman Corporation in East Bloomfield, New York, invited us to come in and film their operation. I had toured parts of their plant before, and I knew there was a lot to see.

During the tour, their head engineer, Ed Schultz, asked if we would like to see something special. Naturally, we were excited! He took us out a back door next to the bulk CO2 tank that fills all the cartridges they make. Then, he told us about a secret project of his. He’d taken one of their breakbarrel rifles and installed a gas spring in it. But this wasn’t your typical gas spring — oh, no! This unit had way less pressure inside, and Ed told me the breakbarrel would cock with about 16 lbs. of effort! One-finger cocking for a gas spring! I looked at him like he was crazy. No one had ever made a gas spring rifle that was easy to cock (remember — it’s 2009).

Ed handed me an air rifle with a handful of pellets. There is a berm that’s about 15 yards from the building and he told me to pick out a clump of dirt and shoot at it.

Then I shouldered the rifle, released the safety and squeezed the trigger for my second shock. It shot like a dream! It shot very much like the Beeman R8 I recently tested, when the rifle was full of Tune in a Tube grease! There was no vibration, no buzz, not a lot of sound (we were outside), and very little recoil. Just that solid “thump” that a finely tuned spring rifle can have. I kept shooting it, not because I was hitting the target. To tell the truth I couldn’t tell if I was hitting it or not. I just liked the feeling of the rifle when it fired!

I told Ed I thought this rifle was a world-beater, which is my term for a gun that I think has a great chance for success in the marketplace. The rifle was a .22 and Ed told me that for some reason the .22 version was delivering a lot more power and performance than the same gun in .177

I told Ed I wanted to test this rifle if Crosman ever made the decision to manufacture it. Well, some time passed but eventually they did make the rifle, and in March of 2010 they sent me one to test. It was called the Benjamin Legacy SE and I started the test right away. Unfortunately that same month I went into the first of many hospitals for the battle of my life with pancreatitus and Part 1 of my report was not written for five more years! Why? Let me tell you. 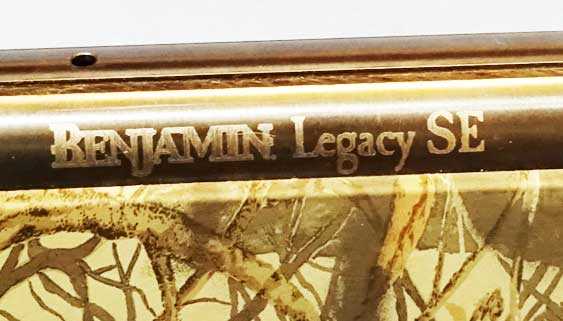 Not many airgunners have ever seen this name on an air rifle.

While I was in the hospital, I was out of touch with this blog. Edith ran it for me and posted articles I had written years earlier. For close to two months I was so medicated that I forgot I was even a blog writer! When I came to my senses, it was late May of 2010, I was in the second hospital and the Benjamin Legacy SE was not doing well in the market. By the time I was discharged from that hospital in June, the rifle had been taken off the market. I didn’t write about it then because there was nothing to write about.

A lot of time passed and I forgot about the special rifle. But it remained in the back of my mind, and finally in 2015 I included it in a special 4-part series called Interesting gun designs. A month after I finished that series, Edith passed away unexpectedly and I forgot about the rifle for the second time.

Throttle brought it back

I generally don’t like to write about things you can’t buy, but the discussion we have had about the Umarex Throttle has revived my interest in the Benjamin Legacy SE design. I am telling you that the world’s smoothest spring-piston air rifle was made with a lower-pressure gas spring and it performed admirably. Well — I think it is admirable. Many of you may not agree. The performance specs (velocity) are nothing to shout about. It shoots .22-caliber RWS Hobby pellets at an average 536 f.p.s. That’s only 7.64 foot-pounds, and you know that sort of velocity turns off about 95 percent of airgunners.

Those who actually shoot the gun and experience the smoothness I am talking about understand, but if you run that velocity number I just gave past most airgunners, they snicker in derision. Get three of them together and they will “design” a way to make this rifle more powerful, which, if executed, will result in a breakbarrel that cocks with 42 pounds of effort and slaps you in the face every time it fires. It’s as if you discovered the Fountain of Youth and tried to get people to drink the water, but before they could, a marketing guy decides to add flavors, effervescence and a heavy shot of caffeine for an energy boost. Then a CFO decides that, instead of real water from the Fountain of Youth, they could save a lot of money by using filtered city water right at the bottling plant! Sure — that will work! (For the benefit of our readers for whom English is not their primary language, I am being extremely sarcastic here.)

To their credit, Crosman did realize that this rifle was a winner. Although the Benjamin Legacy SE was taken off the market, they didn’t give up on the idea. They produced several air rifles along the same lines and managed to get another 100 f.p.s. velocity from the .22 version with the same low cocking effort. They called that rifle the NPSS (you will hear more about this one in Part 2). They also discovered how to make it work in .177 caliber. That became the Benjamin Titan GP. For a very short while they added the title Lower Velocity to that model, because the rifle developed less than 695 f.p.s., but that honest name killed sales. And without sales, there can’t be airguns.

There is still a Benjamin Titan GP air rifle today, but it delvers .22-caliber pellets at 950 f.p.s. with a cocking effort of 31 lbs. That’s a lot less effort than gas springs used to require, but it’s not the rifle I am taking about in this report.

The NPSS DNA carries on in the Nitro Piston 2 air rifles. They develop a lot more power, and there is advanced technology inside the Nitro Piston unit to dampen vibration, but they do deliver a lot of power for very little cocking effort. They are not as smooth as the rifles I am describing here, but they are still quite a bit smoother than the gas spring guns of the past. And they sell much better to the general public who want more velocity.

To summarize today’s report — Crosman once made a landmark breakbarrel air rifle (my opinion only). The smoothness of the cocking effort and shot cycle was unparalleled, but the velocity was low. It didn’t require any special technology to achieve — just a gas spring with less pressure. All that was needed was acceptance of a velocity that is lower than today’s airguns deliver. The airgun manufacturers don’t get to make that call — that’s made by buyers.

I am not finished with this report. In the next and final part I will show you the accuracy I got from these lower-powered rifles. It’s eye-opening, to say the least. I hope you readers appreciate this look behind the curtain. This is stuff you will never read about anywhere else. I don’t think this story is over yet, either, but the next chapter is not up to me.