Here’s a special Christmas present for several readers — the start of my report on Crosman’s 102 multi-pump repeater.

The .22 caliber 102 repeater is derived from the 101, which was originally just called the Crosman Pneumatic. The numbers came much later. The 102 was made from 1929 to 1950, at which time all model 100 variants were terminated. 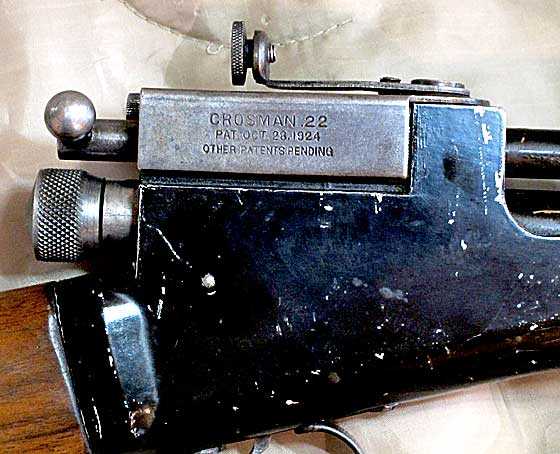 The receiver doesn’t give the model number.

The gun I’m testing for you is the one I bought at the Texas airgun show, but received earlier this month. This one has the hard-rubber “clickless” forearm that was only available on this model in 1938 and 1939, according to the Blue Book of Airguns. The rubber has hardened and cracked with age and any benefit from the softer compound was lost decades ago. 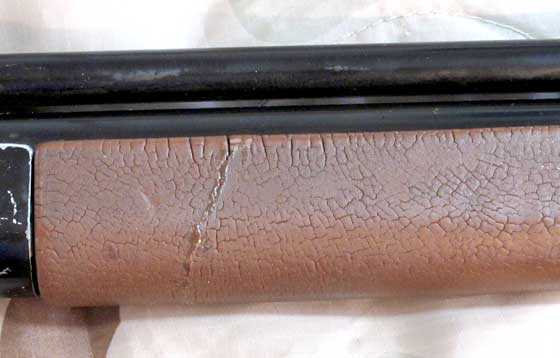 The old hard rubber “clickless” forearm has dried out and this one was repaired at some time in the past.

So, does the 102 get more than one shot per fill? No, it doesn’t. Then what is the advantage of the repeating mechanism? No advantage, really. In fact, there is a disadvantage, because you have to shoot only those pellets that fit through the tubular magazine — there is no easy way to load a single pellet into the 102 breech. And, take a look at the loading “port” that tells you what kind of pellets you were expected to use. 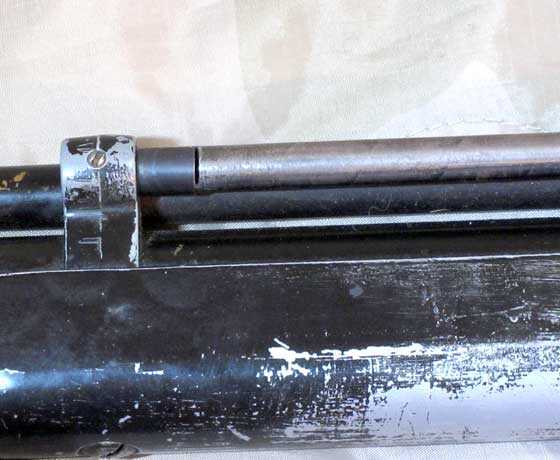 The magazine is the silver tube on top. Where do you load it? 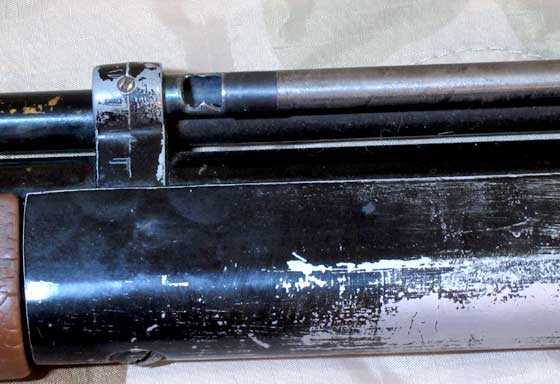 There it is! Slide the sheetmetal cover back to expose the loading port. It looks a lot like a wadcutter pellet.

The magazine tube holds 20 pellets, according to Crosman literature of the period, but the length of the pellet has something to do with that number. I’m sure that if the pellets are short, more than 20 will fit.

So why did Crosman offer a repeater? The short answer is marketing. They had already offered a repeating CO2 rifle called the model 118 that was a conversion of a gallery gun — model 117. Some buyers liked the bolt action repeating function, though after they realized the rifle has to be pumped manually for each shot many of them may have changed their minds. The 118 was a bulk-fill CO2 rifle that could shoot many magazines of pellets before needing to be filled, so it was different.

That said, the 102 carried a premium price of $15 when it came out in 1929, compared to $10 for the single shot 101. That was a lot of money for a pellet rifle, and I’m sure the Great Depression that started with the stock market crash in October of that year didn’t help sales any. You may think that because pellets are cheaper than .22 rimfire rounds people turned to airguns en masse, but they first had to raise the capital to buy the gun, and money wasn’t that plentiful during the 1930s.

The rifle is all wood and metal. It has a bronze barrel that’s painted black. The buttstock is walnut, which is correct for this model that Crosman considered to be premium, and the forearm is hard red rubber.

Most of the metal parts on the exterior are painted black, and don’t appear to have ever been refinished. A few, like the mag tube and the bolt, may have been blued at one time, but most of that finish has been rubbed off over time. The receiver cover and rear sight leaf appear to be color case-hardened.

You might look at that loading port and wonder how picky the 102 is about the pellets it accepts. Well, know this — the “magazine” is just a gravity-feed tube, so the muzzle has to be elevated every time the bolt is worked. A sliding brass shuttle moves to the left to align with the rear of the magazine tube, and if there is enough of a push from gravity and if the skirt of the pellet is small enough, it will fall into the shuttle. The length of the pellet determines how much it fills the hole in the shuttle. Gimmicks like pointed pellets are probably not going to work in the 102 because the points may get stuck in the skirts of the pellet in front of them and they will lock the brass shuttle in place. 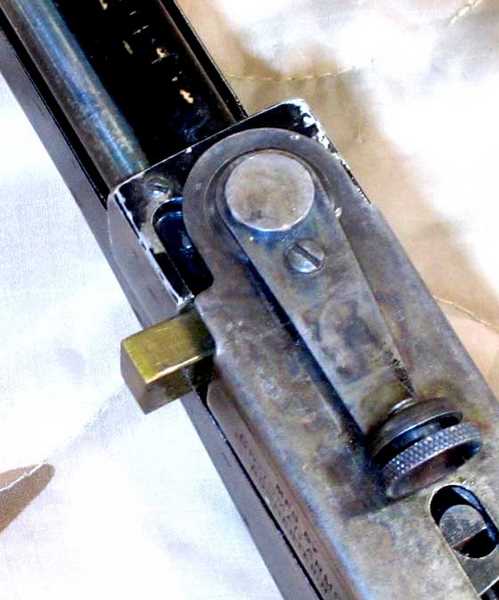 Open the bolt all the way and the brass shuttle lines up with the magazine.

The size of the loading port also prevents you from trying to load pellets that clearly will not fit in the shuttle. So it’s there to keep you on track, as well.

That being said, I had to try it. First I loaded a single pellet, so things wouldn’t get too far out of control. Both RWS Meisterkugeln pellets and Eley Wasp pellets worked well in single shot.

Then I loaded 5 of each pellet — testing just one type of pellet at a time. The Meisters fed flawlessly. The Wasps fed through the shuttle well, but I felt some resistance when the bolt tried to push the fat 5.6mm pellets into the breech. It wasn’t hard — just a feeling that was noticeable, where the Meisters fed without a bump.

I stopped here, because Part 1 is not the place to begin testing the gun. But the 102 operates so differently that I had to at least try it. And, I learned two things. First, the repeating mechanism is more than just a gimmick like I said in the beginning of this report. It really does speed up the loading process because your fingers don’t have to fit into a tight receiver slot. Second, the “clickless” forearm no longer is. I knew that just from feeling it, but now I have heard it click against the pump tube many times.

The 100-series multi pumps all come with peep sights, and the September 1929 launch advertisement says the 102’s sights are improved. Of course it does! That’s marketing. But are they? I’m going to say a resounding, “No!” to this one. The rear sight elevated a little by a screw in the leaf, but windage is realized by just shoving the sight from side to side. There is no lockdown, so the sight can be moved while handling, which is not true of the 101 rear sight. 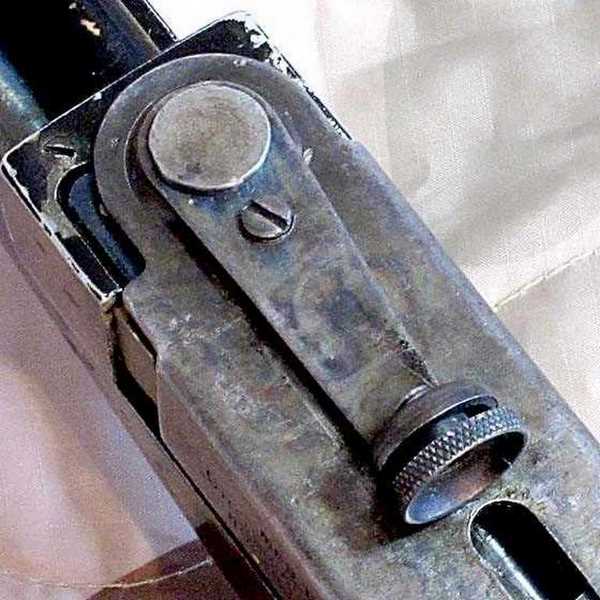 The screw controls elevation. Windage is by shoving the sight left and right.

I mention cocking today because this rifle cocks easier than the model 100 I complained about. The cocking knob is knurled with what the Blue Book identifies as the long knurled knob. It’s a great place to grasp, and, though the striker spiring feels just as stout as the 100, this rifle is easier to cock.

And that is as far as I’m going today. I can’t wait to see how fast this one shoots!