Today we start looking at an air pistol that’s uncommon in the U.S., and indeed, around the world — the FLZ Luftpistole version 2. FLZ stands for Fritz Langenhan of Zella Mehlis, Germany. We have looked at one other FLZ airgun on this blog in the past — the Millita that now resides in RidgeRunner’s Home For Wayward Airguns.

I don’t think the FLZ air pistol is rare, but the first version that has a rounded grip was made from 1926/7 to 1940, according to The Encyclopedia of Spring Air Pistols, by John Griffiths. Version 2 that I have was introduced in 1937 and lasted until 1940. The nation of Germany was preparing for war in the late 1930s, and commercial production was curtailed, so I think the second version of the gun must be less common. That doesn’t make it more valuable — just harder to find.

When I bought the gun the seller said it was firing weakly. He thought it might have stale grease in the powerplant, and indeed it might. But I don’t think this pistol was ever designed to be that powerful.

The pistol is 16-1/2 inches long, 8 inches of which are the barrel. This model came with both smoothbore and rifled barrels and mine is rifled. When I examined the bore it looked like 20 miles of dirt road, so a thorough cleaning is in order.

The metal is deeply blued and highly polished. My example has buggered screws and is missing a lockscrew. The wood is worn and doesn’t match the condition of the metal.

The pistol weighs 1 lb. 4-3/4-ounces. It is very light, but since all the weight sticks out in front of the grip, it feels muzzle heavy.

The stock and grip are one piece of wood that’s most likely beech. Unfortunately the wood grain runs perpendicular to the grip, so the inevitable crack that runs all the way around the top of the grip is present. Target rifles like the FWB 300 and the Anschütz 250 have the same problem. Wood has no strength when it is oriented this way, in relation to stress. When you cock the pistol the base of the grip would have been pushed forward, resulting in the crack. 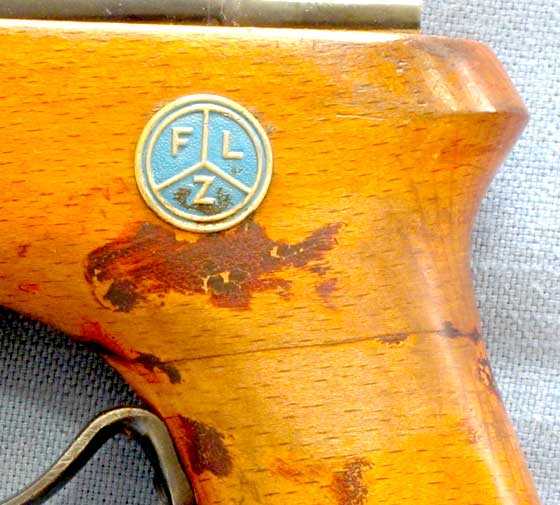 Here you see the crack in the grip. Also, look at the FLZ medallion.

Some clever previous owner scratched what almost looks like a peace symbol into the right side of the stock. It doesn’t add anything but I don’t mind it, either. It gives me a little link to the pistol’s past — or at least I like to think so.

There are very few marks on the exposed parts of the pistol. On top of the barrel it says FLZ Luftpistole and on the left side of the grip is the FLZ post-1921 trademark of the company’s initials inside a brass and blue circular medallion. A letter Z is stamped into the bottom of the barrel, just  ahead of the base block, signifying “gezogen”, which means rifled. It’s actually the past participle of zihen, which generally means “pulled”, so that’s why the letter Z is used.

The only marks are on the barrel.

I took the barreled receiver out of the stock to see if there were other marks that were hidden, but there were none. And disassembly isn’t as straightforward as it might seem. I even told myself that older spring pistols like this often have trigger return springs that are separate from the action and yet that did not stop me from popping this one out on the floor.

The sights do not adjust for elevation, but both front and rear slide sideways in their dovetailed slots. The front sight is a post and bead and the rear is a rounded notch.

The front and rear sights are for sporting use.

If you think the FLZ pistol looks like a breakbarrel rifle you are not alone. Everyone agrees that it does. It isn’t until you see how small the spring tube is that you realize this isn’t a cut-down rifle. It was always a pistol. The looks are just borrowed from the breakbarrel rifle design.

I will test this old girl for you in the usual way. When I had it apart to look for marks I could see that it is bone dry on the inside, so I may take it apart again and give it a good luberication.