Colt came to market in 1873 with their Peacemaker, which was the first time they could legally make a firearm with a bored-through cylinder. That allowed the convenient use of cartridges, but had been blocked for years by Smith & Wesson, who made the first cartridge revolver in 1856 (the S&W website says 1857, but I have always heard 1856). When the S&W patent expired, other firearms manufacturers piled on fast. 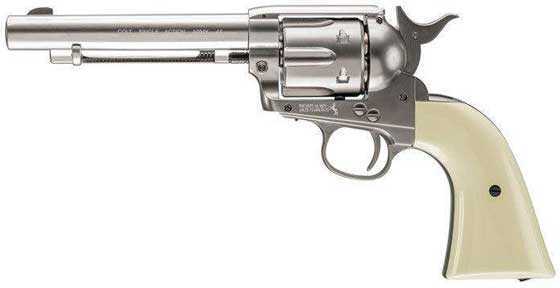 Remington followed suit in 1875 with their first revolver. And, because they based theirs on earlier Remington designs, there is a significant difference between the Colt and them. The Colt has two screws through the frame — one for the bolt and the other for trigger to pivot on. Remington has just one to serve both parts. In the firearms, that made a big difference! 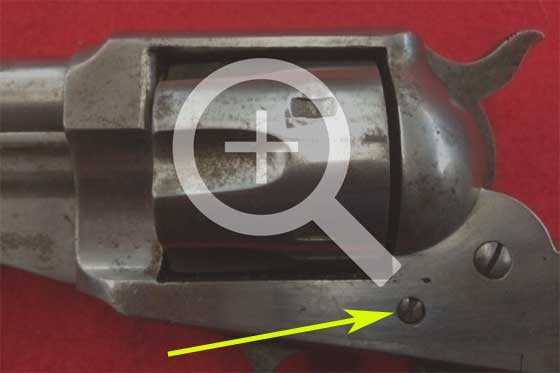 This is a genuine Remington 1875 revolver and you can see the single screw (arrow) that both the trigger and bolt pivot on.

That single screw made the Remington action a little stiffer and more prone to jam than the Colt. Remember, I am just talking about the firearm now — not the pellet/BB gun. I owned a well-worn Remington 1875 firearm and found its action to be troublesome.

This 1875 BB/pellet gun, in sharp contrast, is just as smooth as a Colt. I can see that an extra screw has been added at the front of the frame, so this action is not exactly like the Remington firearm. That’s good for us because it means we won’t suffer the same problems that Remington firearm owners had.

The second problem with the firearm was its caliber. It was .44 Remington! Find a fresh box of those today! The replica guns are being chambered in .44 Special, .44/40 and .45 Colt. Most gun owners do not reload, so making a true replica firearm that copies everything exactly is a recipe for disaster. Even Remington realized their mistake and started chambering the 1875 in .44/40 (correctly called the .44 Winchester Centerfire or WCF, but Remington would never call it that!) later in the run. To the best of my knowledge the 1875 was the only firearm ever chambered for the .44 Remington. Even the Remington 1890 revolver that came later wasn’t chambered for it.

Fortunately for airgunners, this air pistol has a smooth bore that allows both standard BBs and pellets. You get different cartridges for each type of round.

It’s pretty obvious that this revolver is powered by a single 12-gram CO2 cartridge. Where Umarex had to use the 1860 Colt Army (cap-and-ball revolver) grip frame on their SAA to accommodate the cartridge, the Remington grip was always larger and longer and fits a cartridge readily. 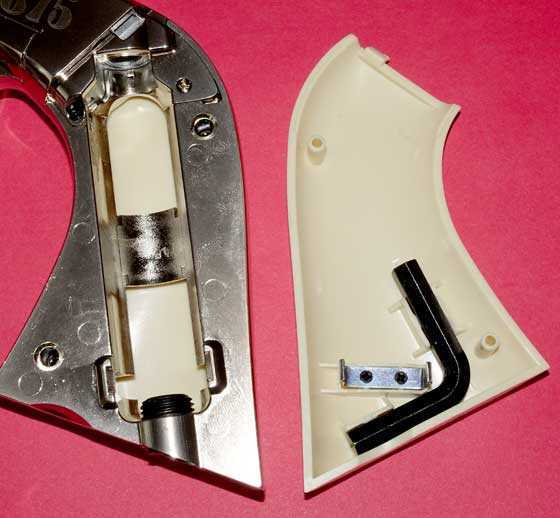 The left grip panel comes off to load the CO2 cartridge. It also holds the piercing screw wrench.

The gun comes in a blister pack that I didn’t like at first. However, I know why they did it that way — and it wasn’t primarily to save money. Airguns are never the top-selling products in a store, so they fight for shelf space. It’s called real estate in the trade. A tree of blister packs allows many times more product in the same aisle space, and volume-sales stores tend to carry more product if they come packaged this way.

The gun comes with a manual that’s printed in 1-point type, as in the print is smaller than the inscription inside your wedding ring. I have to wear my magnifying hood on full power to read it.

Is this a REAL Remington?

It probably doesn’t matter to most of you, but to a Remington collector, it does matter whether the gun is a licensed product or just a knockoff. This one is the real deal and says so on both the package and the gun. It’s made in Taiwan.

Loads through the gate

If you are not a single-action shooter you might expect the cylinder to swing out of the side of the gun for loading. This one doesn’t do that. To load you first pull the hammer back to the first click, which is half cock. Then open the loading gate on the right side of the frame and rotate the cylinder clockwise by hand one chamber at a time to unload the empty cartridges and load fresh ones. A spring-loaded ejector rod located under the barrel is there to push the fired cartridges out. You won’t have any problem extracting them because in this pistol they don’t change dimensionally from firing, but a firearm cartridge does swell and needs to be pushed out. The ejector rod is there for that.

The cylinder holds 6 cartridges, though in a single action firearm you only load 5, because you want the hammer to rest on an empty chamber for safety reasons. Some gunfighters would roll paper money and stuff it in the empty chamber — a sort of Hide-A-Key for money in the old west. 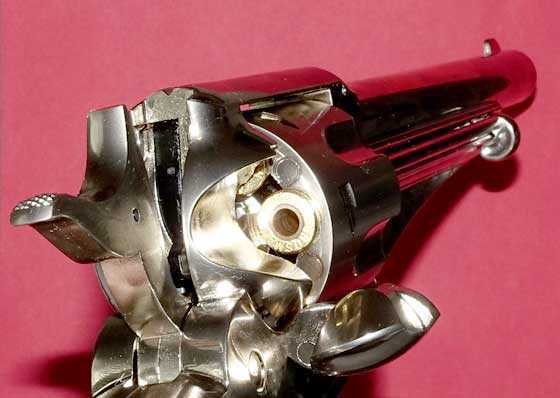 Load the cylinder through the loading gate. You can also see the rear sight notch here.

The front sight is a fixed blade. The rear sight is a V notch cut into the top of the frame. That’s the same as the original and just as hard to use. Add to that the fact that this pistol is nickel-plated and you have to pick your targets carefully. A day with bright sunshine will be a challenge that may require dark targets.

The cylinder can be removed to clear a jam, or just because it’s fun and you want to. Put the gun on half cock. The firearm has a screw up front that has to be removed, but the airgun has a spring-loaded screw just in front of the cylinder that is pressed in while pulling out on the cylinder rod. When the rod is all the way out, release the screw and the cylinder comes out of the right side of the receiver.

Like all the Colt SAA airguns the hammer of this Remington stands proud of the frame by a fraction of an inch. It does go all the way forward when it fires the gun, but rebounds to this position immediately.

This looks like a well-made replica. I’m looking forward to testing it! 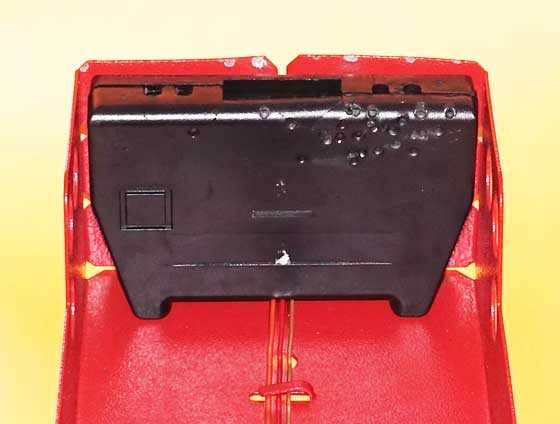 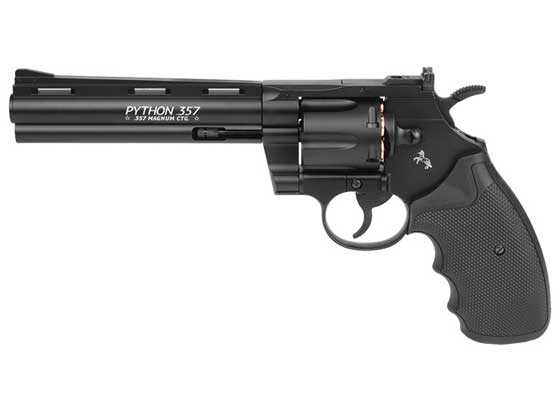