Today I begin looking at the Daisy model 105 Buck BB gun. That’s quite a difference from $1,000+ PCPs — no? But this is a basic BB gun, perhaps the most basic there is. And I am testing it for two very good reasons. First, this BB gun is more suitable for younger kids than even that icon, the Daisy Red Ryder. It’s better because it’s smaller, shorter and costs less.

The second reason I’m reviewing this BB gun is because reader Terry Harman has sent me a scope base for one! It’s called the Little Buck Rail Scope Mount. Now, a scope on a BB gun isn’t a mainstream thing, but there are lots of people who like the idea of scoping them. You may recall that I reported on the Brice scope base for the Red Ryder back in 2016. And much to my surprise, using a scope on a Red Ryder did improve the accuracy measurably.

I want to report on the BB gun first of all, but that can go faster than a normal report. BBs don’t vary in velocity that much — certainly not like pellets, so I can combine the velocity test and the first accuracy test in one report. Then we will look at this new scope base and mount a scope.

I looked in the Blue Book of Airguns to find the history of the Daisy 105 because I thought it was generations old like the Red Ryder. What I discovered is there are several models of smaller BB guns and the 105 Buck is just one of them. The Blue Book also says the sights are fiberoptic, but thankfully that’s incorrect. The front sight is a squared-off plain post and the rear sight is a plain squared notch. More on the sights in a bit.

The Buck is a very small lever action repeating BB gun. It holds 400 BBs in a gravity-fed reservoir that feeds BBs as the gun is cocked. The gun is 35.4 inches overall and the test gun weighs 1 lb. 13 oz. which is about 1.8 lbs. They do vary because of the variable weight of the wood butt.

The pull of the stock (the distance between the end of the butt and the trigger) is 10.75-inches. That measurement is the one parents deal with all the time when getting a BB gun for their children. As I recall, the Red Ryder comes with instructions for cutting off the buttstock to fit your child. I’m not saying the Buck will fit all children, but it will come a lot closer from the start.

The gun is blackened steel with a genuine wood buttstock. The front sight, lever, trigger and safety mechanism are black plastic that does not detract from the appearance, in my opinion. There is no buttplate — just rounded-off wood.

There is also no forearm, which seems like the cost-reduction step that it is. But this one isn’t new. It dates way back to almost the dawn of folded-metal BBs guns. Plenty of vintage and even antique (over 100 years) BB guns lack forearms.

This BB gun is made in China, as many BB guns are today. The overall quality looks fine and seems no different than when the guns were made in America. We know that most of the world’s premium BBs are made in China, so it should surprise no one that the guns are made there, as well. Yes, the U.S. and China are in a tariff war right now, but the retail price of the Buck remains around $30.

The front sight is a squared-off post that at first glance appears to be attached with a Phillips screw. But that screw head is simply molded into the plastic sight that is itself a part of the muzzle cap of the gun. 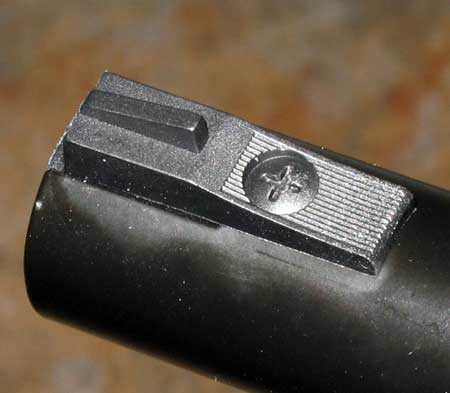 The Buck’s front sight is a crisp post that has a fake Phillips screw. The sight is actually a part of the muzzle cap.

The rear sight is an extension of the steel spring anchor of the gun. Lift it out and the mainspring can be removed from the gun — though a lot of other steps are necessary, before you get to that. 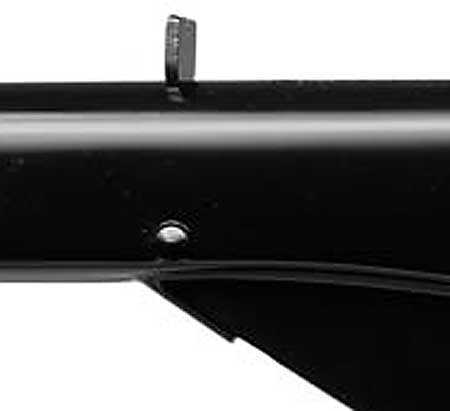 The steel rear sight is the top of the mainspring anchor. It does not adjust.

The trigger is plastic, as mentioned. It is combined with the crossbolt safety that is entirely manual, thank you, Daisy! The listed pull weight is 8 lbs. and I can tell you that when a gun’s trigger pull is 4 times the gun’s weight, it won’t be easy to shoot with full accuracy. I’ll measure the trigger pull in the next report, but I can tell you right now it’s heavy. Many kids will need two fingers to fire this gun. 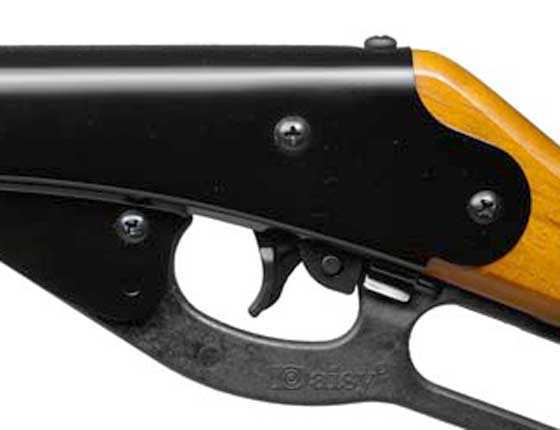 The trigger is plastic and heavy to pull. Note the crossbolt safety behind the trigger. It’s 100 percent manual!

On the outside of the lithographed box Daisy says the Buck is capable of 350 f.p.s. I really doubt that number. Pyramyd Air lists the velocity as 275 f.p.s. which I think is a lot closer to reality. Even the Red Ryder of today doesn’t get 350 f.p.s. I got 280 f.p.s. when I tested my 60-year-old Red Ryder with Daisy Premium Grade BBs. Then I got a brand-new Red Ryder and it averaged 281 f.p.s. with the same BB. I don’t think there is any way this smaller BB gun is going to exceed that!

Uncharacteristically I read the owner’s manual for the gun, just in case they slipped in something special. “And after every 50,000 shots or every 5 years, whichever comes first, give the longevity screw a quarter turn clockwise. There is enough adjustment to prolong the life of the BB gun 2 million shots or 500 years before rebuilding.” And that was when I spotted the separate orange instruction sheet that tells how to cock the gun!

Daisy has installed a ratchet safety in the lever cocking mechanism. This does away with the childhood rite of passage of having the lever slap your bare knuckles. What some nasty little boys used to do was have another kid cock their gun, then leave the lever down and pull the trigger. It was sort of the kid’s “M1 thumb.” Ha, ha! Well the lever on the Buck has a ratchet mechanism that catches the lever 7 times through the cocking arc until the gun is cocked. Once cocked the trigger cannot fire the gun until the lever is brought all the way back home.

I am sure the design committee was proud of this change for the safety it brings. Little did they expect that buyers would pull the lever down until they heard a click and then assume the gun was cocked! Oh, my! Lucy, you got some ’splainin’ to do!

Finally some engineer has used some common sense in the design of this BB gun. The screws that pass through the sides of the receiver all have nuts on them. Daisy always punched the sheet steel to form a screw thread on the side opposite the screw head, and when that failed, fathers all around the world found nuts that fit the screws. Now the factory is building them that way and there is no need to ever strip a screw again.

I am looking forward to this test because it’s one I never thought I would do. A Daisy Buck? Come on! That’s like taste-testing water!

But look at how water is sold today. I guess it’s past time for this test!