Today I test the 1875 Remington BB and pellet revolver with pellets. I switched to the shells that are specifically designed for pellets and loaded a fresh CO2 cartridge into the gun.

Using a 2-hand hold, I shot off a bench for this test, resting the butt of the pistol on a sandbag. I shot at 25 feet and used a 10-meter pistol target. I shot 6 rounds at each target and used a 6 o’clock hold for greatest precision.

I don’t sight in when the target is this close and I’m shooting the sights that came on the gun. The first RWS Hobby pellet landed a little more than an inch below the bull and was fairly well centered. Six Hobby pellets went into 1.527-inches at 25 feet. In all I’d say you wouldn’t have any reason to miss a soda can with Hobbys at this distance. 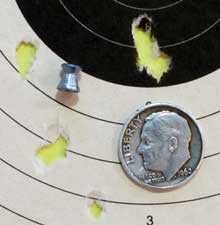 Six RWS Hobbys went into 1.527-inches at 25 feet. The bottom of the bull was the aim point.

The next pellet I shot was the Sig Match Ballistic Alloy wadcutter. These were both the best pellet and the worst pellet of the test. Four of the six pellets went into 0.424-inches at 25 feet. The 5th shot landed high and near the center of the bullseye. That opened the group to 1.214-inches. 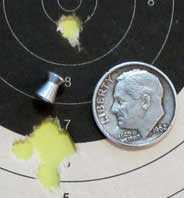 Four Sig Match Ballistic Alloy pellets went into 0.424-inches at 25 feet. They are right at the aim point. The fifth shot struck high, opening the group to 1.214-inches. A sixth shot was low and off to the right, but there was something wrong with that shot.

So I loaded a different Sig pellet into a different cartridge and this time it did come out, though the velocity was very low. Fortunately the pellet did strike the target paper at 25 feet. It hit about an inch and a half below and 2 and a half inches to the right of the main group. I didn’t include it in the photo or in the group measurement because it was clearly not shooting like the rest of the pellets.

I think the Sig pellets are slightly too large for the cartridges and because they are so hard they don’t pass through as they should. Maybe when the cartridges wear in this will change. If that’s not it, the revolver is malfunctioning. We should see that either way as this test progresses.

Next I tested the RWS R10 Match Pistol pellet in the 1875 Remington revolver. Six of them landed in a 1.474-inch group at 25 feet. This group is also right at the aim point. 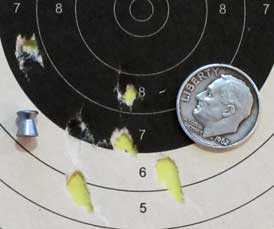 I wanted to test a domed pellet, so the next up was the Air Arms Falcon pellet. Six of them went into 1.245-inches at 25 feet. Once more the pellets hit the target at or near the aim point. 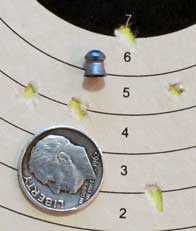 The last pellet I tried was the 8.2-grain RWS Meisterkugeln Rifle wadcutter. This was the heaviest pellet I tested in the 1875 revolver. Six pellets went into 1.428-inches at 25 feet. They did hit a little lower on the paper, but were still in line with the center of the bull. 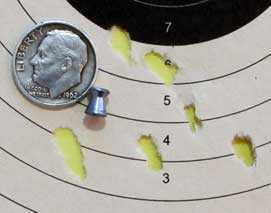 We have five groups from different pellets before us today. The Sig Match Ballistic Alloy could easily have been the best one, except for some reason they had a problem that I attribute to their size and hardness. The other four pellets gave groups that ranged from 1.245-inches to 1.527 inches. That’s a narrow range! And all of the groups were at or near the aim point. I think the conclusion has to be that the 1875 revolver is very good with pellets to 25 feet.

There were no more “poofs,” so I think I was right about the Sig pellets either being too big or too hard or a bit of both.

This has been a thorough test of Crosman’s 1875 Remington revolver. We did see that a few of the cartridges were reluctant to fire pellets — at first. But given time they seemed to wear in. And then the “poof” monster hit us again today. I think the air pistol just needs a heck of a lot more shooting than I am able to give it!

As far as realism goes, this revolver is spot on! I don’t think you could ask for an air pistol to come any closer to the firearm at this price.

So get one if you like the realism. Just understand that the revolver does better with pellets than with BB. 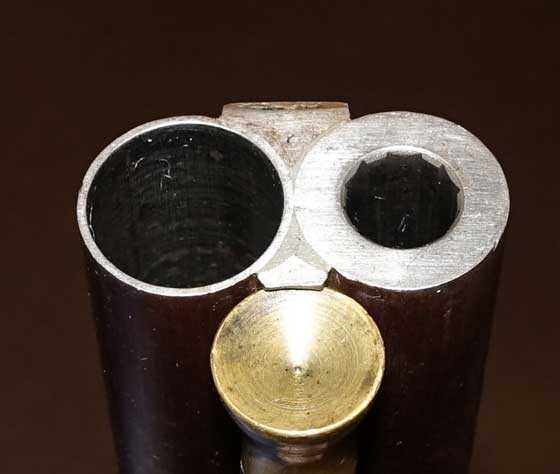 The importance of rifling