I’m taking my time with this report because I’m testing three top-of-the-line products together. Of course the main report is about the Air Arms S510XS Ultimate Sporter with Laminate Stock, but I have mounted a Meopta MeoPro Optika6 3-18X56 scope on it in Sportsmatch 30mm high adjustable scope mounts. Everything I am testing is the best of the best. And in Part 3 of the S510 report I spent a lot of time explaining how I adjusted the rifle and also how I mounted the scope and sighted it in. Today we see the fruit of that work as I begin testing the rifle for accuracy at 25 yards.

You may remember that in Part 3 I showed you two shots at a target from 12 feet. They were to sight-in the rifle and to adjust the Sportsmatch rings with enough droop to compensate for the rifle’s natural tendency. 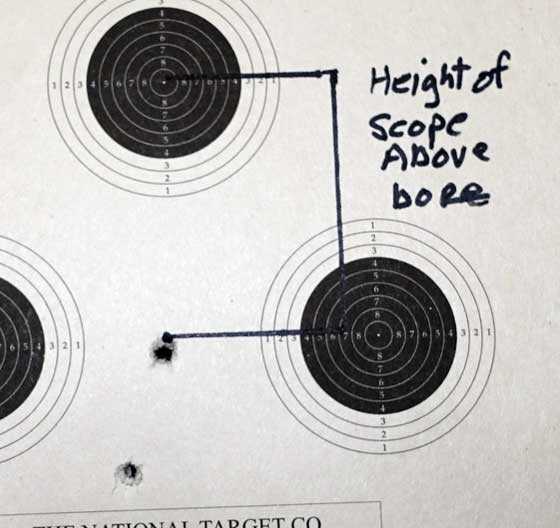 The sight-in target I showed you in Part 3.

Well, I used that same target to finish sighting in. Starting at 10 meters I fired five pellets and adjusted the reticle to bring them up to where I thought they should be at that distance. In my experience a pellet that’s one inch low at 10 meters will be spot on at 25 yards. I thought I had the shots fairly well centered at 10 meters, but when I backed up to 25 yards the shots were off to the left.

I had planned showing you that target and talking though what I did, but it looked too confusing after I was done. So I just dialed in some correction and shot five shots at 25 yards. And by the way, I’m shooting the JSB Exact Jumbo Heavy pellet.

Wouldn’t you know it — the first pellet blew the dot (the 10-ring) in the target bull away. In the past I have powered through that because the scope reticles were thick enough to center the bull more-or-less. But not this time. This Meopta scope is so fantastically clear that I had turned on the illumination to watch the red dot in the center of the 9-ring. And my shot had just blown away half of that ring! So, I had to guesstimate where the 9-ring was and I was certain that caused my first 5-shot group to grow unnecessarily. 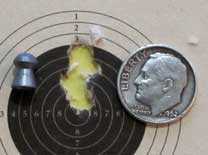 Okay, BB can learn. I adjusted the scope up by 7 clicks and shot another 5 of the same JSB pellets. This time the aiming point remained clear but the group isn’t that much smaller. Five JSB Exact Jumbo Heavies are in 0.331-inches at 25 yards.

Five JSB pellets went into 0.331-inches at 25 yards. This is also a vertical group.

Well, listen to BB! He’s complaining about a 5-shot group at 25 yards that’s a third of an inch between centers. Get him!

You wanna know why I’m complaining? I’m complaining because I am seeing things through this fabulous scope that I have never seen through any scope before — not a Nightforce, not a custom Hakko — not even a Leupold scope that was custom-built for field target. This Meopta scope is C-L-E-A-R!!!

I’m complaining because, for the first time in my shooting career I can SEE that I can do a much better job! I could have stopped after the word SEE, because that’s what’s happening. I can see that tiny red dot of illumination inside the 9-ring on the target that is 0.217-inches (5.5mm) across, and I can see it so clearly that, if I concentrate, I can keep the dot inside that ring. In fact I can keep it on top of the 10-ring that’s the same size as the dot (0.5mm/0.01968-inches) about 80 percent of the time. This scope isn’t good — it’s FABULOUS!

Even with 32-power scopes I can’t see as clearly as I can with this one that stops at 18 power. I imagine this is what the world looks like through a Swarovski scope or one from Schmidt and Bender.

These JSB pellets are not right for the S510 I am testing. They are wonderful in a lot of other airguns — just not in this one.

I needed to find some pellets that show the real capabilities of the S510 and a crazy thought hit me — what about Air Arms pellets? Now some folks may think that because the tin says Air Arms that they make them, but of course they don’t. JSB makes them for Air Arms. As I understand it they are made on dies that Air Arms owns. So why not give them a try?

The first pellet I tried was the 16-grain Air Arms Field pellet. The second shot went into the same hole as the first and right then I knew I was onto something. But, after 4 pellets had gone into 0.139-inches (I measured it), I got flustered and forgot how to shoot. I “pulled” the last shot and opened the group to 0.181-inches. I am not kidding! I got so focused by the potential of this rifle/scope/mounts setup (and so mesmerized by keeping the red dot over the 10-ring) that I was embarrassed by this “horrible” group. And, I really did “pull” the last shot to the left of the main group. 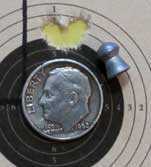 Five Air Arms 16-grain domes. I was actually embarrassed by the large size of this 0.181-inch 5-shot group! I didn’t use the trime for scale because I thought the group was too big. The left side of the group is a pellet I “threw” on my last shot.

The second Air Arms pellet I tried was their Falcon. This time it was even worse, because it was even better. This time the first 4 pellets went into 0.11-inches. Only because I was looking through that Meopta scope could I even tell the group was growing. And, sure enough, on shot 5 I got so flustered that I threw it high and right to enlarge the group to a whopping 0.345-inches! This time you can see the flier that I swear I threw there. I was sniping the trigger.

Yeah — I know it’s massive but what can I do? Five Falcon pellets went into 0.345-inches at 25 yards. The high right hole was the last pellet that I threw.

Okay, I am now as flustered as a teenaged boy on his first date. But I wanted to finish this test strong, so I selected the 16-grain pellet to shoot a final 10-shot group. And I did fabulously for the first 7 shots. In fact 9 of the 10 shots are in a round 0.17-inches. HOWEVER — shot number 8 wouldn’t go off until I jerked the trigger back. That one shot opened this group to 0.307-inches at 25 yards! Imagine that! I’m, upset at shooting 10 pellets into 0.307-inches at 25 yards.

We are not done with this test. Oh, no! In fact we are just getting started. Remember how I had to learn to relax with the Stoeger springer? Looks like I gotta do it all over again with the S510.

Being this close to real quality is a definite change for me. I feel like at any moment I will be asked to get out of the Rolls Royce and climb back on my bicycle again. So, I be draggin’ my feet.

Hafta do this again real soon.