It’s been quite a while since I did an historical report and this may not really be one — I just don’t know. I did a web search and didn’t find the rifle I’m covering today for sale new anywhere. Several used ones had sold in the U.S., but they are kind of scarce here. I think they must be more available in other countries including Canada (?) because the velocity is quite low. It’s below the Canadian limit (for airguns) of 500 f.p.s.

The MP532 is a single stroke pneumatic 10-meter target rifle. It has a crude target stock that doesn’t have an adjustable cheekpiece or an accessory rail on the bottom of the forearm. The buttplate does adjust up and down for fit.

Apparently the first versions of the rifle had wood stocks made of a single piece of lumber and they had the reputation for cracking at the pistol grip — just like the FWB 150 and 300, before the company stabilized them with a vertical pin through the grip, and also just like the Anschütz 250. The two MP532s I have both have “firewood” stocks made of laminated pieces of wood. Reader Vana2 would be so proud! Maybe they are not exactly what Vana2 showed us how to make, but they are thicker laminates than I typically see in rifle stocks. 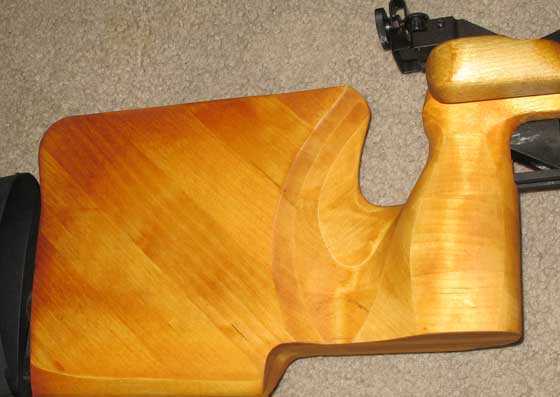 Apparently the Russians fixed the stock cracking issue with a laminate stock made of thick sections of wood.

Yes, I have 2 MP532s. They came from a recent selloff of airguns from EAA (European American Armory), the only company that imported them into the U.S. A batch of IZH as well as some other airguns were recently sold by them, and 4 MP532s were in the batch, along with several more IZH 46s and 46Ms. I also bought a 46M that I plan to test against my 46 head-to-head. Then, perhaps at the next Texas Airgun Show, I will sell the 46M and one of the 532s. I also got a couple other airguns in this sale, so I’m stocked up with historical airguns for some time to come. Now, back to the 532.

From the comments I read online it looks like EAA started selling 532s around 2004. I first saw them at IWA in Nuremberg in 2006. I was blown away that they existed and wanted to buy one but the Russians in the booth didn’t think they were available in the U.S. I guess they were unaware of EAA.

I said I was blown away. Why? Well, I had owned an IZH 46 for many years by that time and I knew what a wonderful target pistol it is. I figured the target rifle would be just as nice, and apparently it was because it was not much more than the pistol in a rifle stock. It’s no more powerful. It’s not easier to pump. The triggers on the two I have are no better than my pistol triggers and I have even adjusted one of them to no avail. In fact, the two-stage rifle trigger I have played with has no good stop for stage two. So it acts like a single stage trigger that goes off whenever it wants to, and not when you are ready.

The other 532 has a delightful 2-stage trigger that breaks crisply. So there might be a way to adjust the trigger than I just haven’t discovered yet.

The front sight is a globe that accepts inserts. One rifle I got had a single insert in the globe and it is the old-style aperture. The other rifle came with no inserts but I was able to fit a 16mm Walther clear plastic aperture insert that reader Kevin recently sent me. It’s loose until the threaded sleeve is screwed tight, but then it locks up and stays in one place, which is all I need. It doesn’t matter if it isn’t perfectly centered because the rear sight adjusts for that. 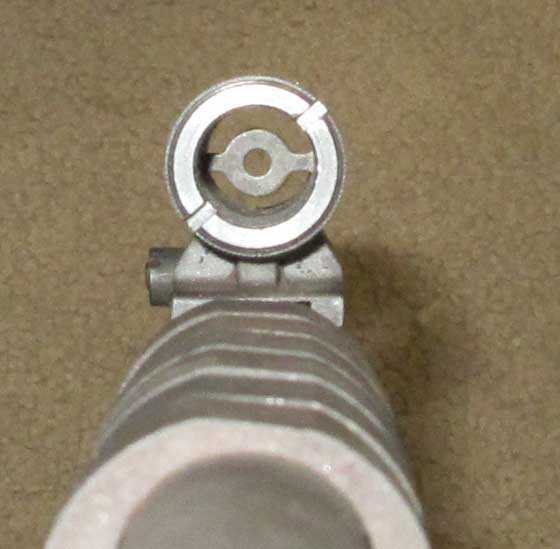 One rifle came with a single front sight insert. Fortunately it is one I can use. 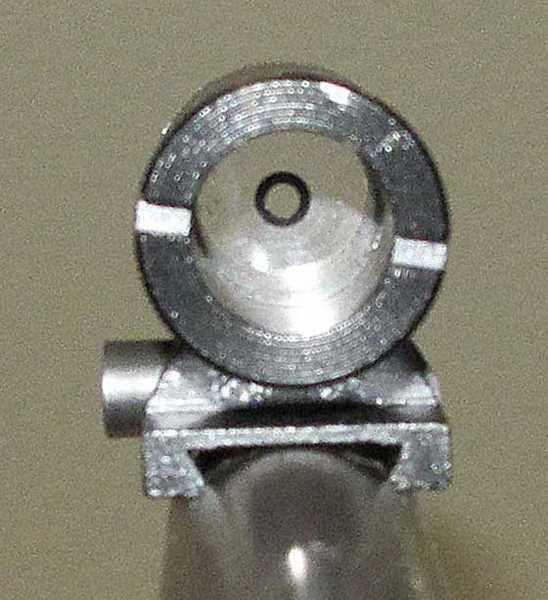 The other rifle had no front sight insert, so I installed a clear 16mm Walther aperture.

The rear sight is a target peep that Americans have panned over the years. They say it looks cheap compared to other 10-meter rear sights. Well, it is a little Spartan compared to other 10-meter target rifle sights, but it does everything they do, so who cares what it looks like? Beautiful is as beautiful does. Naturally I will have a lot more to say about the sights when I test the rifle(s) for accuracy. I think because I have two rifles I will test both of them. Why not? 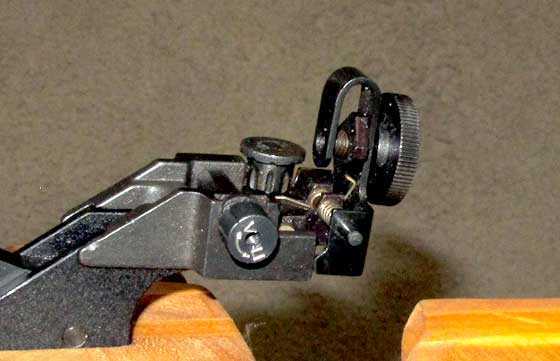 The rear sight is made from the pistol rear sight and turned into a peep for the rifle — exactly as Diana did with their model 70 and 72 youth target rifles.

The two 532s I have come from different time periods. The earlier one was made in 1997, according to the date code in the serial number. The metal on it is polished bright and deeply blued. The later rifle was made in 2007 and is matte all over. Matte is preferred for competition since it doesn’t reflect much light, but shiny blue looks better. 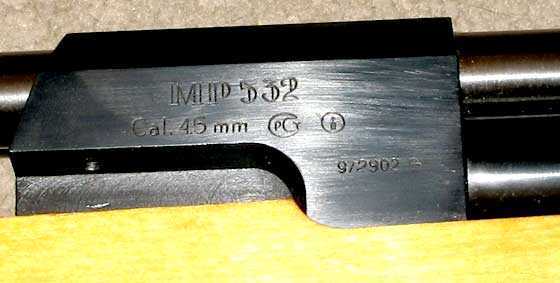 The rifle made in 1997 has a shiny blue finish to all the metal. 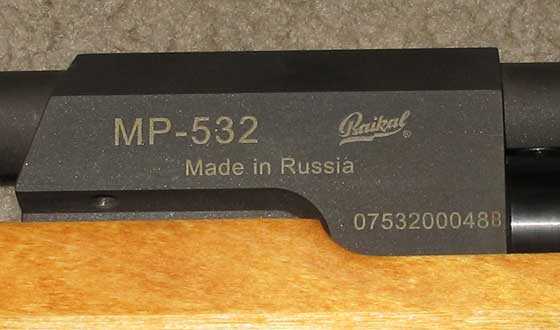 The rifle made in 2007 is finished matte.

For this part I’m, only measuring one of the two rifles. The overall length of the rifle is 42 inches, stem to stern. The barrel appears to be 28-1/2 inches long, but that’s deceptive, because there is a hollow shroud that extends the front sight far from the rear one. The true barrel is 15.5 inches long. It’s not much longer than the 11-inch IZH 46/M pistol barrel. So my remark about the Russians turning the pistol into a rifle is correct. All, that’s been done is to turn the cocking/pumping mechanism 90 degrees to the right to make the rifle a sidelever.

The length of pull is 13 inches, which is very long for a target rifle. A standard target rifle pull is 12 inches or less because the rifle is held differently than a sporting rifle. But the 532 buttplate adjusts out to a 14.5-inch pull that’s suitable for a giant. 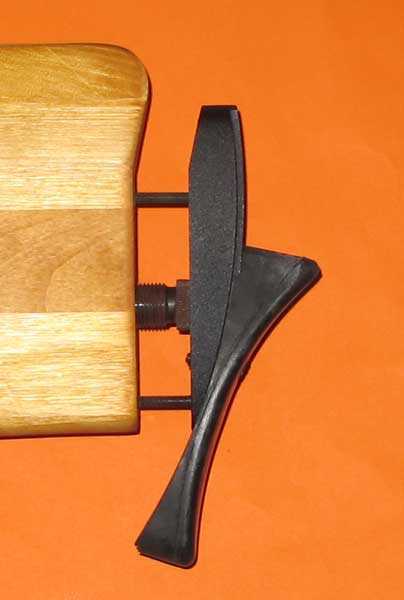 The buttplate adjusts for both length of pull as well as height.

The buttplate also adjusts both down and up by 3 inches in each direction. That gives the shooter a huge range of adjustment to suit almost any adult alive.

Not a true target rifle?

I don’t think the Russians ever intended the 532 to be a true competition rifle, any more than they intended the 46 pistol to be a true competition pistol. World-class Russian shooters shoot FWB, Walther, Steyr and Anschütz target airguns the same as everyone else on the planet. You might think of this rifle as their Edge or Challenger PCP gun for wannabe and starting target shooters to use. And I bet that a lot more of these guns go to duffers like all of us who just want to know that their airgun can outshoot them.

One rifle I have came in its original box and it came with 6 sliding weights on the barrel. Each weight can be positioned along the barrel and held in place by a lock screw. Or they can be removed altogether, though to get them off requires the removal of the front sight, and a special spanner will be needed. 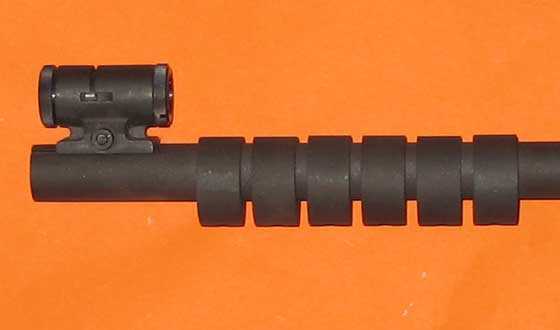 Six weights allow you to set the rifle for many balance preferences. They also remove.

That’s our first look at the IZH 532 target rifle. In Part 2 we will look at the power as well as the trigger pull, trigger adjustability and the effort required to pump the rifle.

I’ll also tell you how I brought both rifles back from the grave after they sat around unused for 12 to 22 years. Should be fun.