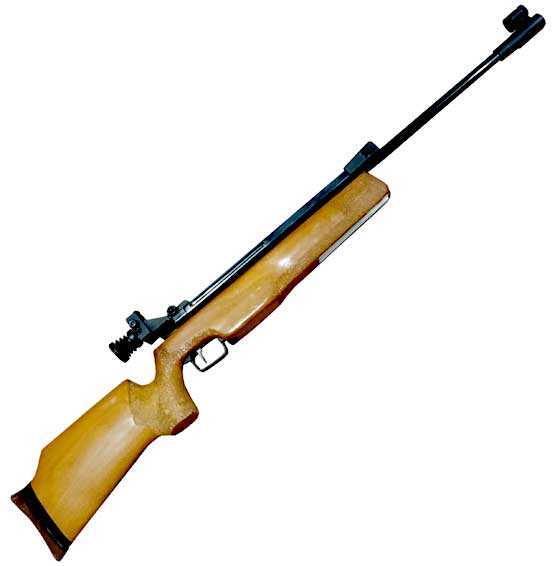 This report is one I was goaded into. In the report titled Gamo I wrote the following, “Then there was the Gamo 126 single stroke pneumatic target rifle. Daisy sold them for a while (1984-1994), just as they did FWB 300s. They are not as refined as a Walther LGR, but they do work fine and are quite accurate. They typically sell for a little less than FWB 300s , but still command a fair price. Expect to pay north of $400 for one that works.”

Reader Geezer responded to that with this, “The Gamo 126 does not “work fine”. They are notoriously unreliable and hard to fix.”

That stopped me in my tracks. I will admit that I also have heard that the 126 is difficult to reseal and I know that a lot of them that have not been resealed, perhaps for that reason. The 126 was produced in the 1980s. The Blue Book of Airguns says production ceased in 1994, but they also say the 126 is an El Gamo, and my 126 is just marked Gamo. So, their information may be off in other areas, as well.

The Blue Book also describes three models — an El Gamo 126, an El Gamo 126 Super Match Target Rifle and a model 128 Gamo Olympic. No distinction is made between the 126 and the 126 Super Match Target, other than the latter has adjustable sights and a match-style hardwood target stock. The description also mentions that this model weighs 10.6 lbs. Both are SSPs and the regular 126 has no other description with it, other than it was made in 1984.

My rifle measures 43.5-inches overall with an 18-inch barrel. The length of pull is 14 inches, which is very long for a competition rifle. It should be 11.5-12.5-inches because of how it’s held in the offhand position.

Just for kicks I weighed my rifle. It weighs 9 lbs. 12 oz. so I think it’s clear that I have the standard 126. It is quite light for an adult target rifle and is more of a Junior model.

My rifle is not marked with a model number that I can find. It simply says gamo (lower case) Made in Spain on top of the compression tube and MC Cal 4,5 (177) and the serial number, with symbols of what looks like a botched Freimark (Capital F inside a pentagram denoting an energy below 7.5 joules) and the profile of a wadcutter diabolo pellet. 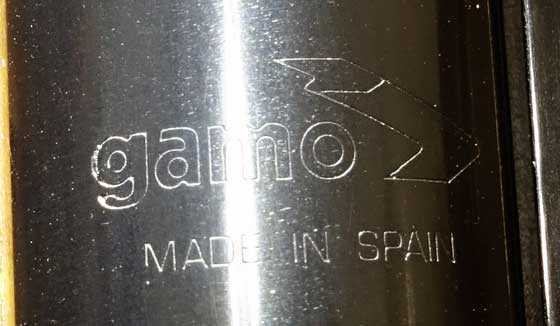 This is the main marking on the rifle. No model number is shown anywhere. 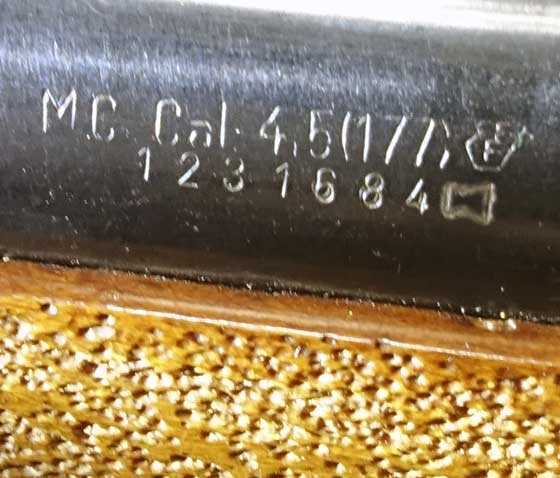 The serial number. The Freimark to the right of the caliber appears to be double-struck.You can also see what has to be hand stippling on the stock.

Gamo 126s were imported and sold in the US by Daisy. Mine is one of those. Daisy marked the rifle in the center of the aluminum accessory rail under the forearm. Now, there has been a lot of talk on all the forums about these guns over the years. I can tell that a lot of it is just jabber and conjecture, but one fellow who owns one says that Daisy advertised the rifle at 550 f.p.s. and his shoots 536. That’s the sort of report I believe. He also says Daisy sold two different models — one with and the other without the accessory rail. Could that be the difference between the standard 126 and the Super Target version? 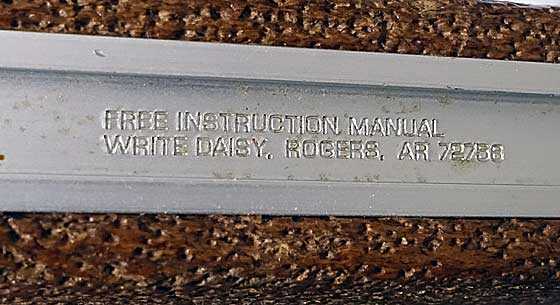 Daisy marked the rifle at the bottom of the accessory rail.

I have shot a 126 at some time in the distant past, but I never owned one. So Geezer’s comment spurred me to look for one. As luck would have it I found one right away and it had been resealed by Champion’s Choice, so I took the plunge. Unlike many vintage airguns a Gamo 126 is not one to invest in, because there is so much bad press surrounding the model like Geezer has mentioned.

My 126 is all metal and wood, with a strange plastic sheath around the barrel that looks like deep bluing, but can be detected by touch. It isn’t a shroud; it’s just a thin sheet of something. The rest of the rifle is blued steel except for a plastic triggerguard. The metal bluing looks deep and the metal is well-polished for today, but it’s not up to the quality level of the contemporary target rifles of the time like the FWB 300.

The stock is a hardwood that might be beech, but if it is, it’s a type of beech I’m not familiar with. It has a subtle grain that beech seldom has. It’s finished in a blonde stain. And there is coarse stippling everywhere your hands go, including on the bottom of the pistol grip. I see no evidence of a strengthening bolt through the pistol grip that is oriented almost 90 degrees the the wood grain, so I will be careful when handling the rifle. FWBs and Anschütz target rifles are notorious for breaking at the pistol grip for this reason.

The forearm narrows after the place where a target shooter would normally hold it, and the aluminum accessory rail on the bottom provides a place for a hand stop/sling swivel or a hand rest for those matches where they are permitted. 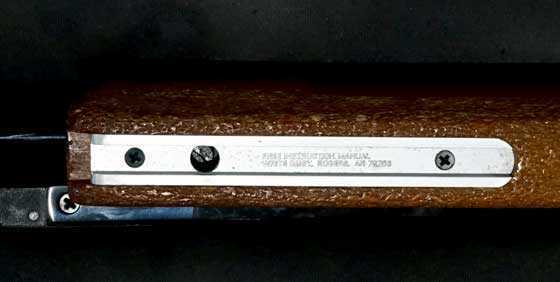 The accessory rail is inlet into the forearm.

The front sight globe that accepts different elements sits on an aluminum muzzle swelling that is finished in a matte gray. The rear target sight is also aluminum and will be familiar to many shooters who have seen them on other target rifles — notably those from Daisy. 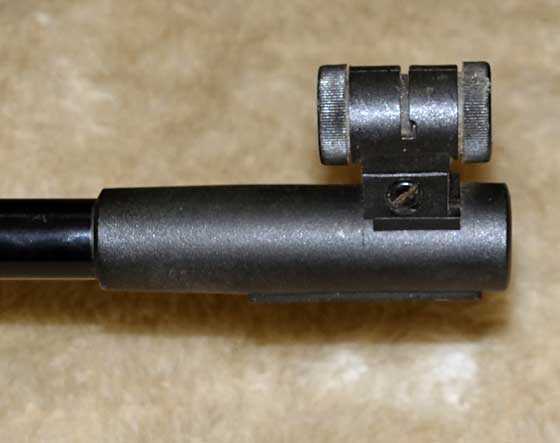 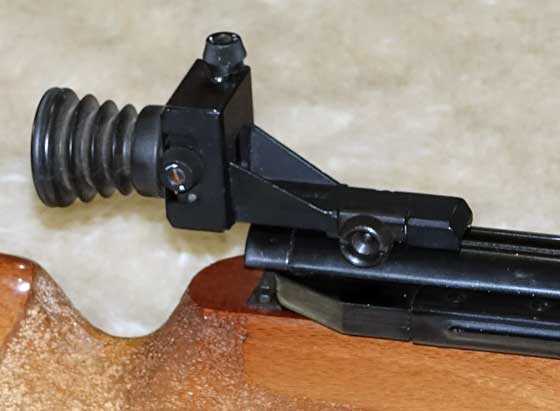 The Gamo rear target sight is familiar to many airgunners.

The 126 is a single stroke pneumatic (SSP)

The 126 has a long sidelever on the right side. Withdraw it to the rear and there is no resistance. Then there is a second operation that is unique to this model I think. The compression chamber must be slid to the rear manually to access the breech. A pellet is loaded into the breech and the chamber is once more manually slid to the front. If you fail to do this the sidelever will push it closed, but it will not compress air on the stroke. I wonder if there are some working 126s out there that are just not being operated correctly? Probably not, but it makes me wonder.

The sidelever comes back far with no resistance. The rifle pressurizes when the lever is pushed forward, and it is much lighter than any other target SSP target rifle I have experienced.

When the sidelever is back but the compression chamber hasn’t been retracted, the piston is fully exposed for oiling. The brown piston head seal is shown at the left. 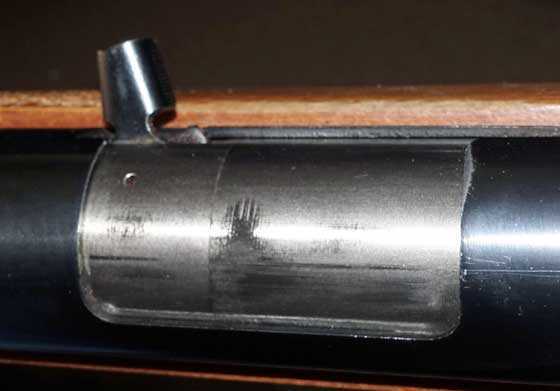 The sliding compression chamber is closed. 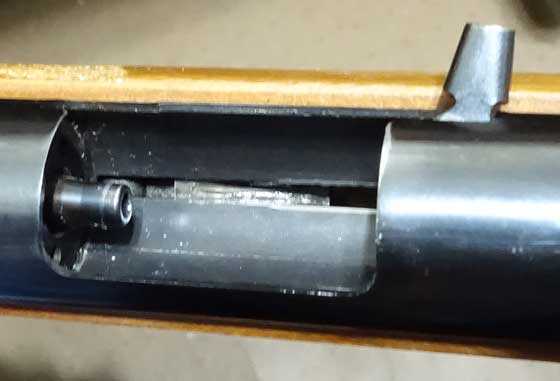 When the compression chamber is slid back the breech is exposed for loading.

The 126 pressurizes air when the lever closes, which is toward the front of the rifle. Walther also did this with the LGR. The LGR is hard to close but the 126 I have is very easy. Perhaps that is the oil-filled piston helping in some way?

Several of the listings on the forums I visited mentioned an oil-filled piston. They claim it’s one reason the 126 is so notoriously hard to reseal. That is all I know about it, however I will say that the Anschütz 250 target rifle of a similar timeframe is semi-recoilless and has an oil-damped recoil reducer that is notorious for leaking. I owned a 250 and can tell you that it’s not really recoilless like this 126 or an FWB 300, but the recoil is minimal.

The Blue Book says the 126 put pellets out at 590 f.p.s., which is right where a 10-meter rifle should be. But remember the guy who owns the Daisy said they only advertised 550 f.ps. We will find out when I test my rifle because it was resealed and should be up to snuff.

The 126 trigger is world-class. It’s every bit as light and precise as an FWB 300S trigger — I think. That’s just me guessing, because I haven’t tested it in any way yet. But it’s adjustable and it looks like there are three adjustment screws. I probably won’t be adjusting it because it is downright perfect the way it’s set now. 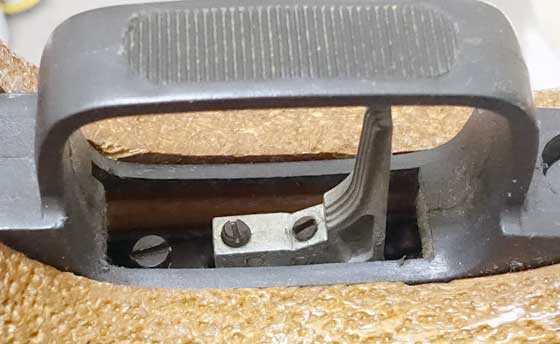 The Gamo 126 trigger is perfect! It is adjustable, but I won’t be touching it.

I really can’t summarize much yet. I have learned a lot about the 126 while researching it for this report. But until we see the velocity and the accuracy there isn’t much more I can say, other than this — The Gamo 126 is a much-maligned 10-meter target rifle. Is it worth all the barbs it attracts, or is it an undiscovered treasure? We shall see. 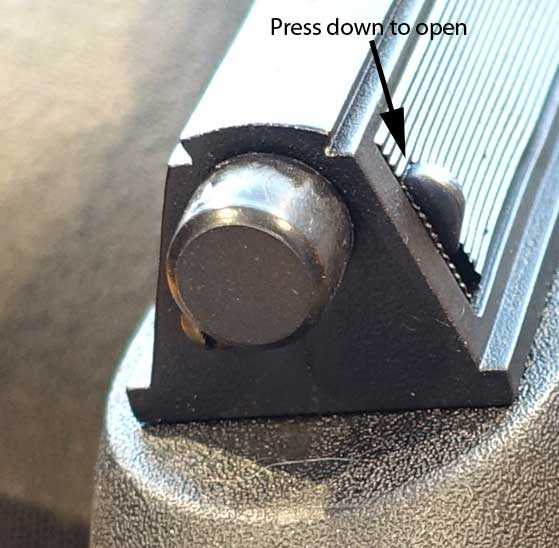