Today is the day, airgunners. This is the day we open the .22-caliber Air Arms Pro-Sport we are testing and install a Vortek PG3 tune kit. It’s a drop in one-for-one replacement powerplant kit that promises to lower the cocking effort of the rifle and smooth out the shot cycle. The power output is 12 foot-pounds in .22 caliber which would be a 11.9-grain RWS Hobby leaving the muzzle at 674 f.p.s. And someone says, “Gee, BB, don’t you know you’re not supposed to tune for LESS velocity?”

The initial inspiration was a Venom Mach II rifle that was owned by Trooper Walsh. That was the rifle that the Pro-Sport was built to copy, and it was a sheer delight to cock and fire. However, at $2,000 in the 1990s, it was an airgun I could never afford to own.

Then a few months ago I happened to shoot Jeff Cloud’s Pro-Sport. Once again it was a sheer delight to cock and shoot. It reminded me of the Mach II of my past. Only this rifle is still being produced, and at a far more affordable price. And Vortek makes the spring kit that tames the beast,

The kit consists of a new mainspring, a spring guide, a “top hat” that is a forward spring guide living inside the piston, two spacer washers, a small tub of grease and instructions. 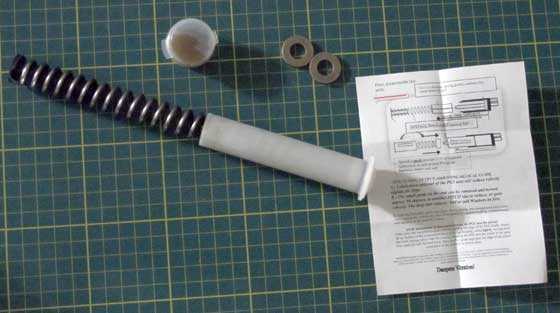 The PG3 kit consists of a new mainspring, a white spring guide, a black “top hat” forward spring guide for inside the piston, two washers that can be used as spacers to increase the preload of the mainspring , a small (but way more than adequate) tub of grease and the instructions.

The instructions tell how to install the kit. There are several options that can be applied, and the instructions address them. They do not tell you how to disassemble the rifle.

I found this kit very easy to install, but before you jump in with both feet, remember that I have been doing things like this for decades. What seems easy to me may not seem that easy to you. I do find Air Arms spring guns easier to work on than any other brand for several reasons. First, they are so well made that you seldom if ever encounter a problem from the manufacturer. Second, neither the TX200 Mark III nor the Pro-Sport require a mainspring compressor to safely open the powerplant.

I had never opened a Pro-Sport before this day, so what you are about to see was as new to me as it will be to many of you. But the Pro-Sport only differs from the TX200 in a few small ways that aren’t a hindrance, and I know TXs very well.

To get the action out of the stock the underlever needs to be opened (not cocked — just pulled away from the barrel) to slip out of the cocking slot of the stock. Once the action is out you can open it by unscrewing one bolt. It’s the bolt that the front triggerguard screw attaches to. It has an 11mm head and comes right out, but here is a tip. If you want to find out how much preload the mainspring is under you can press the back of the end cap on the action against a padded place on your bench while unscrewing the bolt by hand (once it’s loose). The pressure you have to press the action down with to make this bolt loose enough to turn by hand is the amount of preload the spring is under. The factory mainspring took about 40 pounds of downward pressure to turn the bolt. 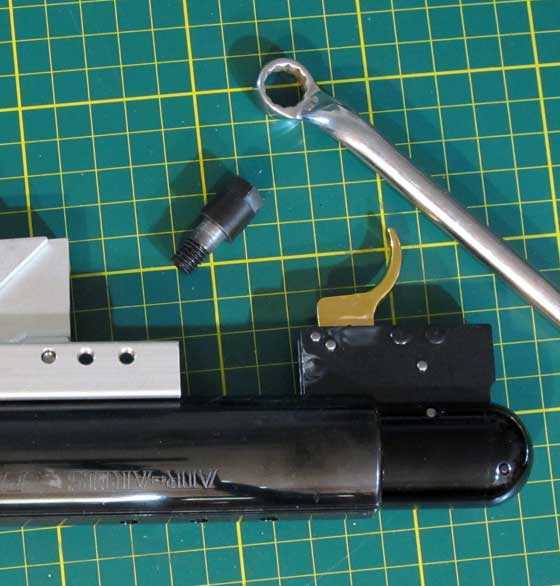 When the bolt is removed the trigger comes out. It’s pushed by the mainspring, and this is as far as it goes. This is why a compressor is not needed.

Slide the trigger out of the gun and then slide out the mainspring and spring guide, followed by the piston. Because the Pro-Sport has a sliding compression chamber, the piston is not held in the gun at this point. If it doesn’t slide right out it may help to pull the underlever down smartly and the piston should come sliding out. 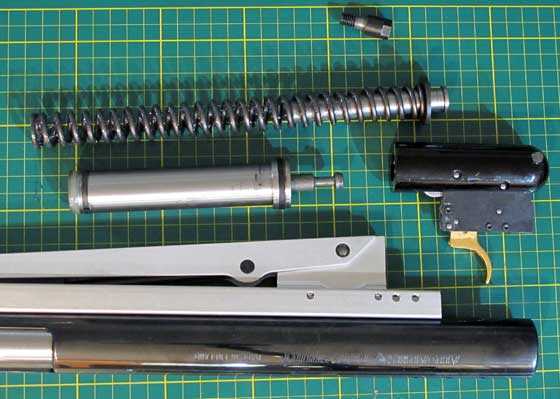 The trigger slides out and so does the mainspring and piston.

I looked at the parts at this point. I expected to see perfectly machined and finished parts because this is an Air Arms airgun. I was not disappointed. The spring was lubricated with their grease in what looked like the correct amount. Their grease is thinner than the Tune-In-A-Tube I plan to use, so a lot of vibration should disappear when I install and lube the new spring. 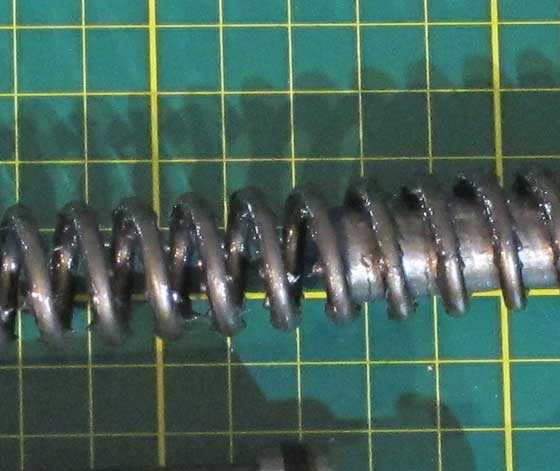 Air Arms lubed the mainspring perfectly. But their grease is thinner than TIAT.

A top hat is a forward spring guide that lives inside the piston. It is engineered to take up all the slack in the inner diameter of the mainspring, so it doesn’t vibrate on the piston rod when the gun shoots. It can also add significant weight to the piston, which makes the gun more efficient with heavier pellets. I could see a top hat inside the piston by shining a bright flashlight inside.

The Vortek kit comes with its own top hat, so the factory part must be removed. It didn’t just slide out, so I used a 4 by 4 wooden post and whacked the rod end of the piston down on the post to jar it loose. One rap was all it took.

One whack of the end of the rod against a post was all it took to get the top hat (left) out of the piston. 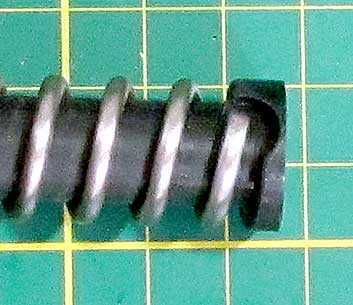 See the end of the spring in the rounded notch? That determines the preload on the mainspring. This is the lightest setting.

I must comment here that both spring guides are very tight on the spring. The black one that’s inside the coils needed padded pliers to turn it so the end of the spring could go into the right notch. The white rear guide goes around the outside of the spring and is also tight. There was just a bit of Vortek lubricant on that end of the spring. I removed it because I am lubing with TIAT.

Tight spring guides are an airgun tuner’s trick for removing vibration. They are more difficult to control in manufacture because coiled steel springs don’t like to hold tight tolerances, and in this case both the OD and ID of the spring have to be precise. So, I have a lot of respect for the PG3 kit!

Assemble the piston and spring

Now I tried to slide the piston and new spring back into the gun. It should slip right in, but for some reason it stopped at the entrance to the sliding compression chamber. I fiddled with it for a minute and couldn’t get it to slide in, so I removed the sliding compression chamber to slide the piston into it outside the gun. Just one Allen screw connects it to the cocking linkage. 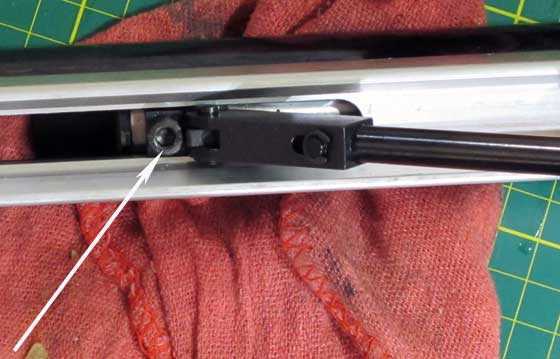 Just one Allen screw (arrow) holds the sliding compression chamber inside the rifle. Remove it and the chamber slides right out. 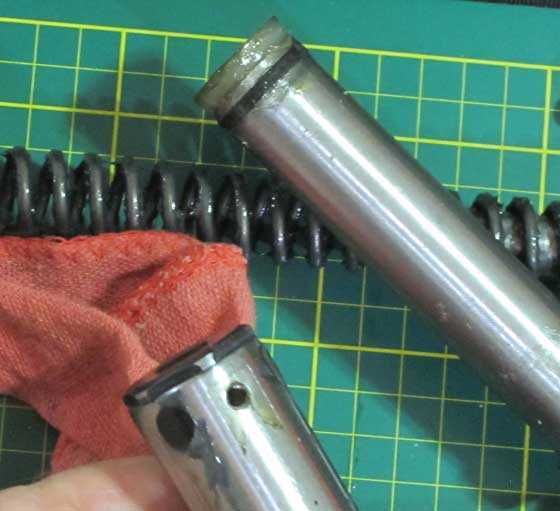 The Pro-Sport sliding chamber (bottom) has three button bearings around its circumference to center the chamber in the spring tube. The smaller hole on the right is for the Allen screw.

Once the chamber was out of the gun I was able to insert the piston into it and then slide everything back into the gun. The new mainspring is shorter than the factory spring, so there was even less preload on the end cap when I inserted the bottom bolt.

It took me a total of 40 minutes to install this kit, start to finish. At least 15 of those minutes were spent taking pictures. I had to wipe my hands before handling the camera for each photo And, when I say start to finish I mean starting with an untuned rifle and finishing by shooting the rifle after the installation. You always test a spring gun by shooting it after the tune because sometimes the parts aren’t in correctly. Shooting is the only way to find out.

The rifle fired the first time and I knew I had hit the nail on the head. It now cocks with much less effort and fires very smoothly.

The factory-tuned rifle cocked with 48 pounds of force. Not only is that a lot, the fulcrum of the underlever is located in a place that makes working the underlever particularly difficult.

After the PG3 kit was installed the cocking effort is reduced to just 35 pounds. It’s still not light, but it’s far easier to cock this Pro-Sport now than before.

The Pro-Sport is now calm when it fires. The factory rifle buzzed a little, but that is all gone, as I knew it would be. The TIAT guaranteed the buzz would leave, and the tightness of the PG3 parts assured me that I could use the TIAT sparingly. This rifle is now a delight to shoot!

And now for the big test. I chose the RWS Hobby to test the rifle. In factory trim the Pro-Sport launches Hobbys at 760 f.p.s., which is good for 15.27 foot-pounds at the muzzle. The spread was 13 f.p.s.

On my velocity test with the factory spring the H&N Baracuda pellets with a 5.50mm head were the most powerful, when they should have been the least. All things being equal, a lighter pellet produces more muzzle energy than a heavier one in a spring gun — or at least that is how it used to be. But the factory top hat I removed from the piston was weighted, which made the piston’s weight greater, and I felt this gun was made to shoot heavier pellets.

Since I removed that heavy top hat and replaced it with a Delrin one that has very little weight, I guessed the Baracuda pellet would no longer be more powerful than the Hobby. To produce 12 foot-pounds this 21.14-grain pellet has to travel 506 f.p.s. I guessed it would average around 475 f.p.s., which is good for the same 10.59-foot pounds as the Hobby. But that was wrong, too. With the PG3 tune as I applied it Baracudas now average 437 f.p.s., which is good for 8.97 foot-pounds. The spread went from a low of 433 to a high of 443 f.p.s. with is 10 f.p.s.

This Vortek PG3 tune kit did exactly what I wanted. The Tune-In-A-Tube slowed things down below the 12 foot -pound spec, but I couldn’t care less. I finally have the sweet and mellow Pro-Sport I was after!

The next step will be to mount the Meopta MeoPro Optika6 3-18X56-scope and see what she can do. I have very high expectations! After that — who knows?