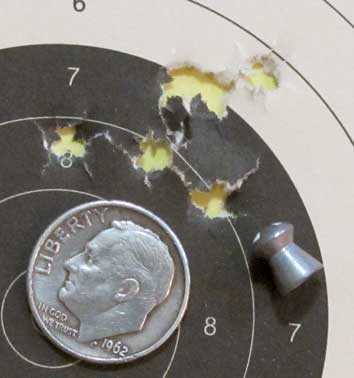 Today I finish my report on the .22-caliber Diana Bandit PCP pistol. I had to relearn some lessons, even though I described them well in the past blog parts.

The purpose of today’s report is to shoot the pistol with the 7-shot magazine that it comes with. Until now I have been shooting it with the single-shot tray.

I had to remount the UTG Reflex Micro dot sight, so there was another whole sight-in. It took all of the 7 pellets in the .22 caliber magazine to get in the bull. The first three shots were from 12 feet and the last 4 were from 10 meters, which is the distance I’m shooting at today.

I removed the UTG Micro Dot sight from the AR-6 crossbow for today’s test for one reason. It is so small that it fits on the Bandit whose very short 11mm dovetail atop its receiver is just 2.8-inches long. You can’t use a sight that won’t mount to that. Ahead of the loading trough there is an additional 0.86-inches, but that isn’t of much use. Whatever you mount to the pistol has to allow clearance for the magazine.

This is to test the utility of the Bandit’s 7-shot .22-caliber rotary magazine. We already know the Bandit is accurate. But how accurate it is with the magazine? We’re gonna find out!

I’m shooting from a sandbag rest at 10 meters. The pistol is rested directly on the bag. The illumination of the dot is adjusted as dim as I can see it against the bright target. That gives me a very small aiming point. I am wearing my normal glasses that are bifocal. I look through the top of the lenses, so I’m using the ever-so-slight correction for distance.

I started with three different pellets, but as the test progressed I was learning so much (some of it for the second time) from just one of them that I only shot .22-caliber JSB Hades pellets. That will make the lessons of today’s test stand out clearly.

I thought I had the pistol sighted in, so I shot the first group of 7 shots, and remember — this is with the magazine. I think the starting pressure was around 170 bar. That is extremely important.

The first group was not where I wanted it so I adjusted the sight down and to the left. One of the best features on this Reflex Micro Dot is how fast it adjusts. It also seems to have a great range of adjustment.

At this point I refilled the pistol, because as we have learned, it is very short on breath. I can get perhaps two magazines of good shots (14) before it needs filling again. Unfortunately, there must have been a little more air pressure inside than I thought when I started, because I now overfilled it to 180 bar. With such a small reservoir you have to move very slow or this will happen.

It turned out to be a great thing, though, because of what you are about to see. The group is very vertical and I can confirm that the first shot is the lowest on the target. The group measures 1.195-inches between centers, but look at the top of the group. That is where the last shots clustered. So, a fill to 170 bar, like I should have done to begin with, should give a smaller group. 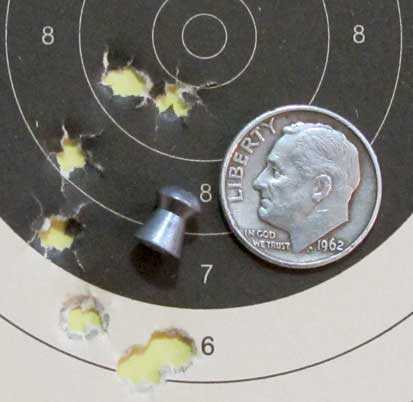 Still shooting from the magazine, on a 180-bar fill the shots climbed from below the bull up to almost the center.

I can’t see the future, so all I saw after group two was the gun shooting a vertical group with the magazine. Would it still group if I fired it single shot like it did in Part 4? If I had my head screwed on right I would have shot this next group from the magazine as well. The first group was so much better than this one, but I wasn’t paying attention. I was flustered after the second group, so I shot each of the next 7 Hades pellets from the single-shot tray.

Seven pellets fired single-shot went into 0.585-inches at 10 meters. The group is much rounder than the previous one. Oh, and I did not refill after the first group, so this one was shot on the 170 bar that the pistol likes. 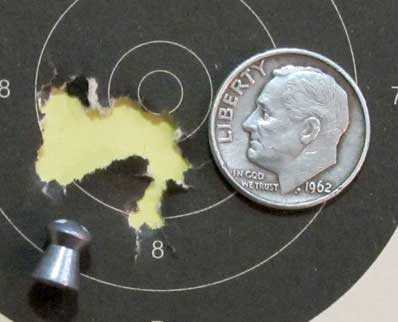 I filled the pistol to 180-bar, as indicated on the pistol’s built-in gauge. Then I loaded the rotary magazine with 7 more Hades pellets and shot the pistol. The first shot hit at the bottom of the bull and the group climbed up into the center of the bull by the final shots. This 1.166-inch vertical group is exactly what I expected.

This vertical group of 7 Hades pellets was fired at 10 meters from the magazine on a 180-bar fill. It measures 1.166-inches between centers.

Now, if I am right, the next group should be higher, smaller and rounder. I’m still shooting from the magazine.

The last group of 7 Hades pellets went into 0.568-inches at 10 meters. The group is smaller, higher and rounder — just as predicted. 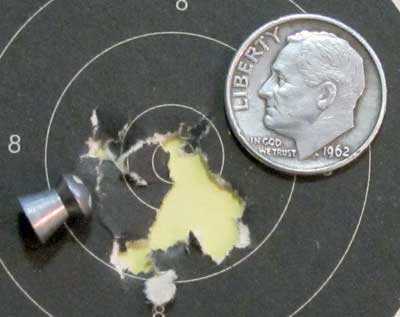 Seven Hades pellets shot from the Bandit magazine at 10 meters on a 170-bar fill went into 0.568-inches. This is the smallest group of the test! The magazine is a success!

I am very impressed by the .22-caliber Diana Bandit PCP pistol. It offers a lot of performance for a very low price. There are things you must know about it, and I hope you have read about them in the five parts of this test. The most important thing to learn is how few shots you get at the best fill level.

The magazine works quite well and I did not see any degradation in accuracy when using it. Granted I only tested with one pellet and at a very close range, but I have little doubt that the Bandit will shoot well with a variety of different pellets.

Hey, I know — let’s run one more test with different pellets! How many of you would like that? I think next time I would like to shoot at least 14 Hades pellets at two different targets, starting with a 170-bar fill, to see if it stays on target through them all. If I do test it again it has to be soon so I can get that UTG dot sight back on the AR-6 crossbow.

Once again, the UTG Reflex Micro Dot sight has proven its worth. Its small size, coupled with its wide range of adjustability make it an ideal dot sight for a great many airguns, both long and short.

I have used the JSB Hades pellet a lot in this test, and the Bandit does seem to do well with it. It’s a premium pellet that is fast becoming a standby in my ammo cabinet.

For a pistol in this price range I am impressed by the trigger. It’s not that light, but it sure is crisp and predictable. In fact there is a lot to like with this air pistol. Once I opened the silencer and got the baffles out of the way, she turned into a real shooter!