Today we begin looking at the Diana Bandit precharged pneumatic (PCP) air pistol. It is the pistol equivalent to the Diana Stormrider rifle.

I read some of the customer reviews of the gun before examining it. It seems to me there are two main camps that purchase a pistol like this. One camp buys it based in the price. It’s everything they want in a Benjamin Marauder PCP air pistol (they hope) for $190 less. The other camp buys the pistol to modify it into something they really want. First they have to fix all the things that Diana got wrong when they designed the airgun, like not putting in a regulator, then they move on to accurizing it with other barrels and exotic sights.

This report isn’t going to satisfy either camp. I’m going to test the Bandit as it came to me and see how it performs as it stands, right out of the box.

Speaking of the “box” in this case it’s a soft case with a foam insert. It’s perfect for carrying and storing the pistol. 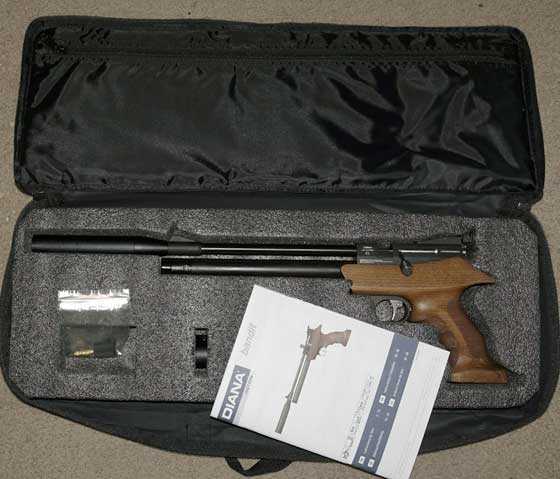 The Bandit comes in a fitted soft case.

The Bandit is a large air pistol. It’s just over 20 inches long and the 9.5-inch barrel is almost half of that. The pistol is largely metal and wood, with just a few synthetic parts like the sights. Looking at it I would say the folks at Diana are listening to the market very closely.

The grip is hardwood and I find it very ergonomic. I have read complaints that it is too large, but my hands are average and it fits them fine. Maybe even better than fine. It fits like a Luger that has been customized — or a Crosman Mark I/II pistol with custom grips. Maybe after accuracy testing I will have more to say about the grip but that will have to wait.

The cocking bolt is located on the left side of the gun. That favors the right-handed shooter, though lefties will have no trouble using it unless they mount a scope that gets in their way. The bolt handle has three rubber o-rings that provide a better grip for your hand. The handle is long enough to get a good grip and I find that the bolt cocks smoothly. There is an increase in pressure required at the back of the cocking stroke, but if you pull the bolt back sharply you won’t notice it.

As large as the pistol appears, it weighs just 2.2 lbs. That’s the way of precharged airguns. They are largely air! And with all that barrel and reservoir tube out front you might think it is muzzle-heavy, but it’s not. The grips grab your hand so tight that I think they absorb the forward weight.

One thing several of the reviews mention is how powerful the pistol is. The .22 I chose is supposed to launch pellets at 630 f.p.s., according to the manual. And once more I have to give Diana credit, because the manual explains that velocity was achieved with different lead pellets! I would think it would be with something lightweight, like a Hobby, but we shall see in Part 2. Many owners are praising the Bandit for its accuracy. Diana claims 11.8 foot-pounds (16 joules) for the .22 version, so we shall see.

Most owners will probably scope their pistols or at least mount a dot sight. The top of the receiver is flat (yea!) and has 11mm dovetails behind and in front of the loading trough. If you shoot with the magazine you will probably have to use two-piece scope mounts and the rear sight will have to be removed.

The open sights are a squared-off post in front and a square notch in the rear. The rear sight is adjustable in both directions. THERE ARE NO FIBEROPTICS ANYWHERE! Once again, I think Diana is listening!

The circular magazine installs from the left side of the receiver. It is held in place by a small rare-earth magnet. To load it into the receiver you must first remove the single-shot pellet tray (Diana calls it the loading base in the manual). Thank you, Diana, for providing that tray with the pistol. Pull the bolt back and cock the gun to remove the tray. Then insert the magazine in its place. Once the magazine is in the receiver, slide the bolt forward to load the first pellet. It is possible to work the bolt again and load a second pellet, so pay attention to what you are doing.

The Bandit trigger is two-stage and adjustable. The adjustment controls the amount of sear engagement, so care must be taken to not get it so light that it becomes unsafe. The description calls it the Diana Improved Trigger.

The safety is completely manual. Once more Diana is to be commended! It’s a crossbolt safety that’s located in the trigger blade.

The pistol is filled to 200 bar. That is 2900 psi. Not 3,000 — 2,900. I had an urgent email last week from a person who doesn’t reads the blog, and he has a .45-caliber AirForce Texan that he told me wasn’t working. He said he filled it to 3,000 psi on the tank’s gauge and the bullets just pooped out. I told him his onboard gauge wasn’t reading correctly and to just reduce the fill pressure to 2,700 psi and shoot it through a couple 2 by 4s, which he did. He was happy about that but then complained to me that an air gauge that doesn’t read correctly is like having a car oil gauge that’s off.

First of all — no, it isn’t. The oil pressure gauge on a car (that has one) is a more expensive unit, and is coupled to a pressure sensor in the engine that sends information to the gauge. That’s assuming we aren’t talking about some hinky unit that has a live oil feed going up to the gauge!

Secondly — do cars even HAVE oil pressure gauges anymore? The little air gauges that are on PCPs are notoriously off in pressure, sometimes by hundreds of pounds. He had one that was way off. But the thing is — just learn where your gun wants to stop and stop there. Don’t worry about what the number is. Use those little gauges as “ballpark” guesses until you have more information about them.

The point is — use the larger air pressure gauge on your fill device — be it a tank or a compressor. It is more likely to read accurately or at least be closer to it. If it doesn’t you will soon get a feel for how much it’s off and in which direction. It’s like knowing how to shut your kitchen cabinet whose door doesn’t quite line up as it should.

Diana provides a probe-type fill coupling that has a male Foster filling on the ether end. That’s another gold star for them! However, the air probe fill hole is missing some kind of cover or plug to keep out the dirt when the probe isn’t in there.

I haven’t shot the pistol that much, but so far I think it is quiet! Maybe not whisper quiet, but perhaps quiet enough for a large back yard. I’ll know more after the velocity test. I looked down the moderator and can see several baffles, so there is real technology in the can.

You can’t please all of the people all of the time. The Bandit has a free-floated barrel that was all the rage about two years ago. Everybody wanted one. But now I read complaints that there is no barrel band. Go ahead, Diana. Put a barrel band on the pistol so they can tell you why it isn’t needed. I dare you! Why don’t I just shoot the pistol for accuracy and let the targets decide for us?

The Bandit looks and sounds like a very good value. I am hoping the accuracy is where folks say, because if it is, this is one to consider!