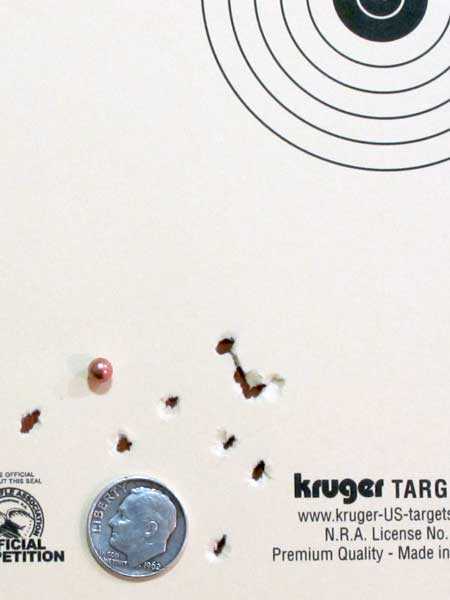 Alas, the cartridge was empty this morning when I started the test. So I installed a second cartridge, and this time I lubed it with ATF stop leak. In 12 hours I will test the gun to see if the cartridge is still holding. {Note: No such luck! This cartridge leaked down in 3.5 hours!}

I shot seated from 5 meters (16 feet 5 inches) and used the UTG monopod for a rest. I shot with a 6 o’clock hold until discovering that didn’t work.

The XD-M sights are perfect for bullseye shooting. The front fiberoptic doesn’t even show up when the target is illuminated brightly. The rear notch is wide and fits the wide front sight perfectly.

I discovered why the BB pistol has the magazine extension that was shown and discussed in Part 2. The firearm has a removable magazine well to make loading the mags easier and faster. The mag extension on the BB pistol takes the place of that.

First to be tested were Daisy Premium grade BBs. The first shot told me there was a problem when it landed an inch below and to the left of the aim point. The group wasn’t too bad, with 10 Daisy BBs going into 1.427-inches at 5 meters. But to hit a soda can at the same distance I would have to hold on the upper right corner of the can.

Next to be tested were the new Dust Devil Mark II frangible BBs. For this target I held the top of the front sight above the top of the rear sight. That is a way of elevation the sight picture when the sights don’t adjust, as these don’t.

As I was shooting this group it looked pretty good. The final 4 shots all went into the same hole. I thought I had a good one to show you. But when I collected the target I saw that one or two shots had landed low.

This group measures 3.775-inches between centers, with eight or nine shots in 1.704-inches. Given that I was holding over when I shot it, it isn’t too bad. 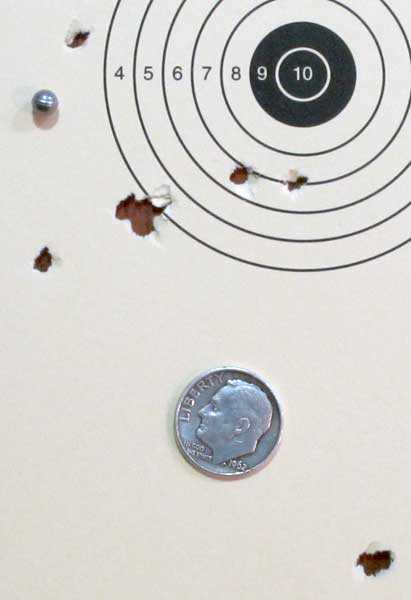 The XD-M put 8-9 out of 10 Dust Devil BBs in 1.704 inches at 5 meters, despite having to hold the front sight high in the rear notch to get the elevation.

The Kruger BB-gun targets I used were ideal for this test. The BBs tore good holes in them because they are printed on stiff paper.

The last BB I tested was the Air Venturi Smart Shot lead BB. These are much heavier than steel BBs, so I knew they would impact low on the paper. I used the same holdover sight picture as for the Dust Devils, but Smart Shot impacted two inches below and to the left of the aim point, nevertheless. They did group well though. Ten went into 1.625-inches at 5 meters with the holdover sight picture. 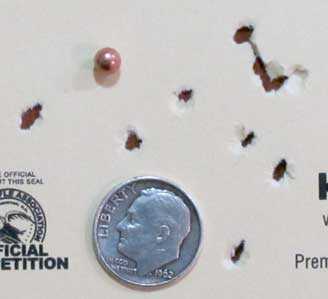 There aren’t many BB pistols with trigger pulls as light, crisp and nice as the one on the XD-M I am testing. The two-stage trigger stops at stage two and breaks crisply with 2 lbs. 14 oz. of effort. It only the pistol shot to the point of aim!

The blowback is extremely realistic! It kicks like a lightweight .22 rimfire pistol. However, when I tried this for this report while writing about it the gun was out of gas — After just 3.5 hours!

In my opinion the Springfield Armory XD-M has little to recommend it. It is realistic and the blowback is very snappy, but there were problems with both magazines and the gun doesn’t shoot to the aim point at 16 feet.

If you own the 9mm XD-M Elite firearm then perhaps the BB pistol would be a good companion. Otherwise there are plenty of other lookalike pistols that do much better.