Today we install the Vortek PG3 SHO tuning kit in the HW 30S. There was a big surprise along the way, so I made today a complete tutorial.

As you remember, in Part 8 I disassembled the HW 30S, thinking I could give it a lube tune and compare that with the Vortek PG3 SHO kit I planned to install next. But on the discovery that the mainspring was bent, I decided to go straight to the Vortek kit. I had to buy it direct from Vortek, because Pyramyd Air was out of them at the time. As a result I had the chance to talk to Tom Gore about the kit a little.

Is the Weihrauch mainspring bad?

I have read several comments that the Weihrauch mainspring ends are not ground properly, plus a You Tube video makes the same comment, so I first decided to take a picture and show you what this one looks like. 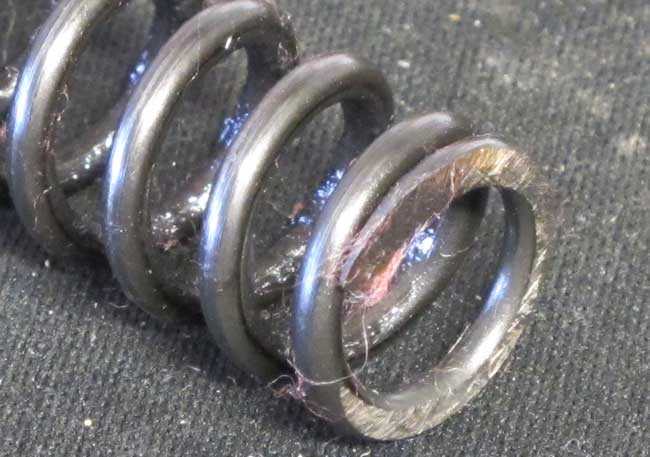 The mainspring that came out of this HW 30S was perfectly ground flat on both ends, and one coil was collapsed, which is just as it should be.

The PG3 SHO kit from Vortek consists of a spring guide, a mainspring and a tophat. The spring guide has another guide down inside that keeps the mainspring from kinking as it’s compressed. There is also a  small plastic jar of grease that you are supposed to only use a third of when lubricating the new mainspring. I will have more to say about the grease in a moment.

I also bought a Vortek piston seal on Tom Gore’s recommendation. I know what some of you are thinking — he sells them so of course he’s going to recommend them! And no doubt that is the case. But I have used many Vortek piston seals and I know they are superior to what the factory puts out. 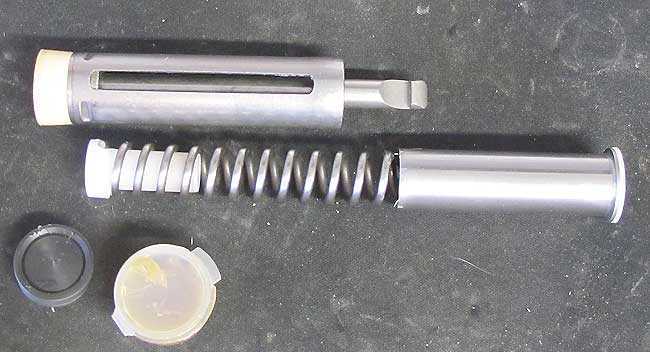 The Vortek PG3 SHO kit with the Weihrauch piston. 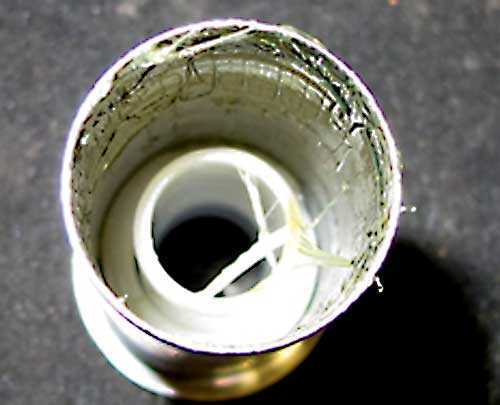 Tom Gore told me to stick my finger into the grease in the kit then pull it out and watch what happens. So I did. The grease clings to the finger and draws out in a long tenuous string. 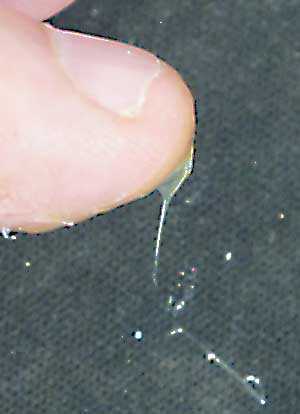 The Vortek grease clings to things with tenacity!

I also bought a piston seal, so the factory seal had to come off the piston for the new seal to go on. I stated prying the factory seal with the blade of a pocketknife, and once there was room I got a screwdriver blade underneath. The factory seal is soft and it pried off easily. 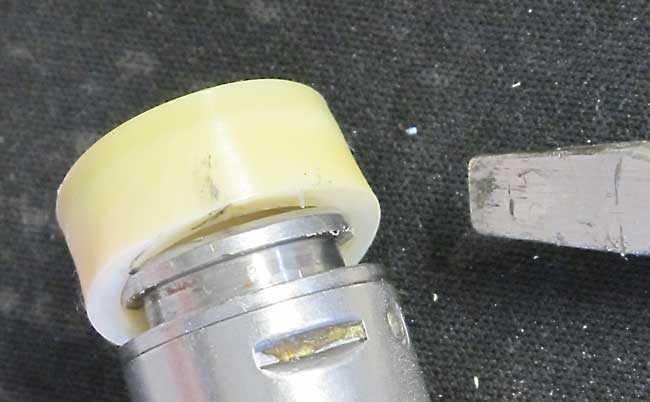 Now it’s time to install the new Vortek seal. In the past these seals have been hard and difficult to install, but this one went on right away. This seal is chamfered underneath where it fits over the piston head and that chamfer guides the seal to a good fit.

Once on the piston the seal is loose enough to rotate easily. In my experience that’s what you want, unless there is a specific reason not to (like alignment of the air transfer port with a part of the piston — I’ve seen that once). The HW 30S has no such reason, so this seal will probably still be with the rifle at my estate sale. 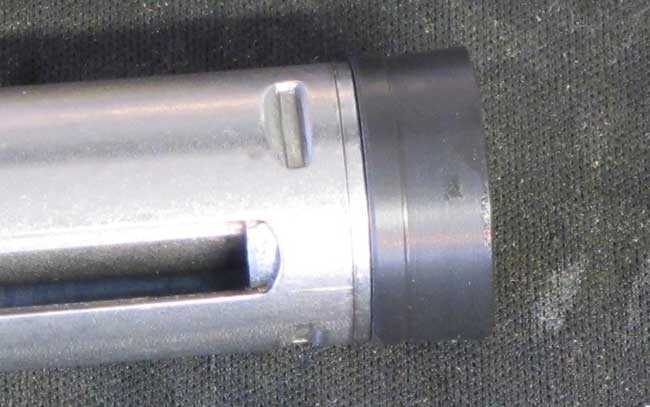 The Vortek seal went right on. The seal rotates easily.

Reader Yogi made a disparaging comment about the welds on the bridge that keeps the cocking link parallel with the piston. I looked at the picture and had to agree. So I promised to take better pictures so you could see the welds more closely. 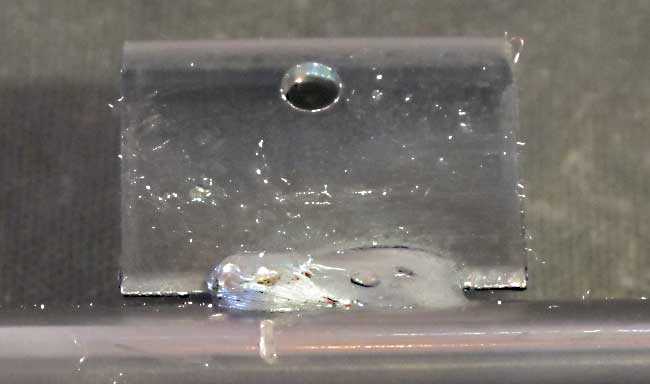 This weld is ugly as sin, but it penetrated the steel and will hold. Probably put on by a novice welder. 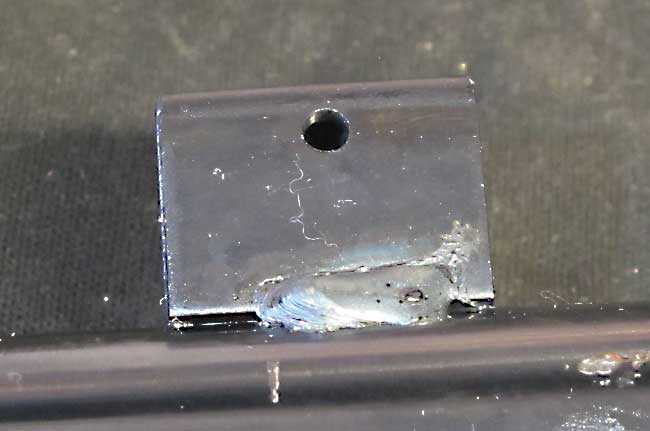 The other weld is ugly, too. But it may have flowed better.

The bridge is on the spring tube to stay. And the ugly welds hide beneath the stock.

It’s time to clean the powerplant and install the kit. I already cleaned the piston so the new seal could be installed.

After cleaning I run my fingers around the cocking slot and every other hole that penetrates the spring tube, checking for burrs. There were none on this rifle. That means Weihrauch left it in the tumbler long enough for the media to get rid of all the burrs left by machining before the tube was blued.

Now it’s time to put the kit into the rifle. Unlike other tuneup kits I’ve installed, this one slid right in with no obstruction of any kind. That was probably because there were no burrs, as I mentioned.

The Vortek spring is shorter than the factory spring, so it goes into the spring tube deeper.

The Vortek kit slid into the spring tube deeper than the factory mainspring and guide. 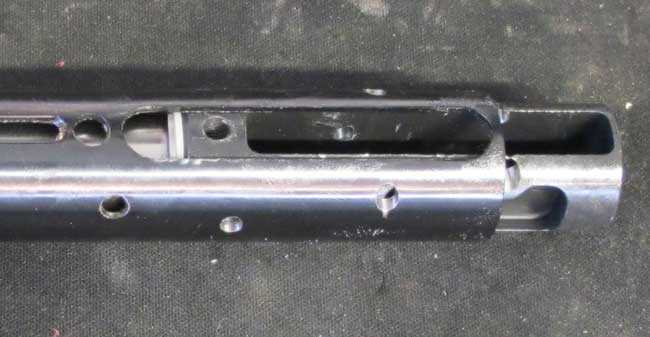 Here is how far the end cap slides into the spring tube with the Vortek kit installed.

And this is how far the same end cap stuck out with the factory mainspring.

And this is where old BB went wrong. I assembled the spring tube all the way to completion with the Rekord trigger installed before it dawned on me that I couldn’t put the barrel on that way!

Don’t do this! I was going to show you a clever way to avoid using a mainspring compressor, but I forgot that the barrel had to be assembled to the spring tube before the end cap was installed.

Assembling the barrel to the spring tube

You see, to assemble the barrel to the spring tube, the cocking link needs to push the piston back just a little. If it doesn’t, you can’t get the hole through the base block (where the pivot bolt goes) all the way into the forks of the spring tube. You can get it to within fractions of an inch, but it won’t quite align. So BB had to take out the trigger and the base block at this point and use a mainspring compressor for the final assembly. If you have two people you can probably make do without a compressor, but that little screw that holds the end cap against the mainspring is difficult to align and start for one man, if he’s also fighting the mainspring.

Lube the end of the cocking link and the slot in the piston. 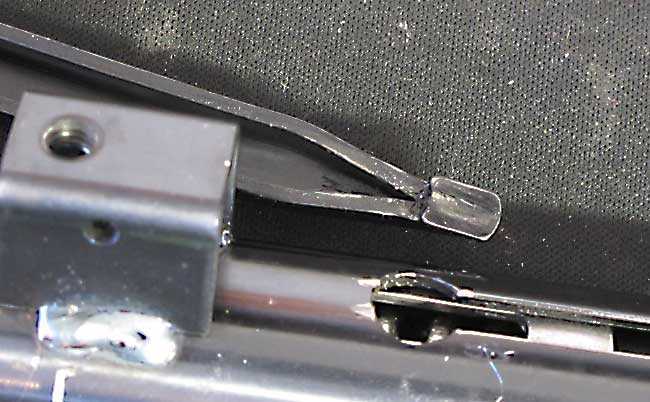 The end of the cocking link (shown upside-down here) fits through the bridge and into the enlarged hole in the spring tube. There is no separate sliding “shoe” for the link to attach to. I lube all contact points with moly grease. You can drive the pin back through the bridge at any time after this is done. 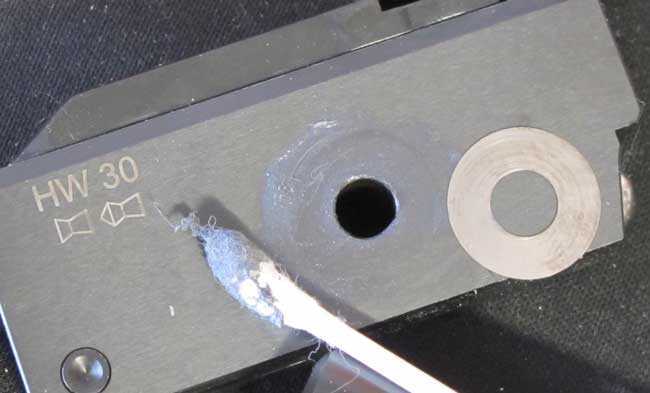 Put moly grease on both sides of each pivot washer, through the pivot hole and on the outside of the pivot bolt.

Now bolt the barrel to the spring tube and tighten it. The barrel needs to stay in place wherever you put it after the gun is cocked, so that pivot bolt needs to be tight. But don’t over-tighten the nut on the other side! Once assembled, the rifle can go into the mainspring compressor for assembly of the end cap.

The rifle is in the mainspring compressor to install the end cap.

Now that the rifle is assembled, it’s time to install the Rekord trigger. I lubricated the sear with moly grease in the last report, so it is okay. To install the trigger I like to cock the trigger, just so it goes in its slot easier. 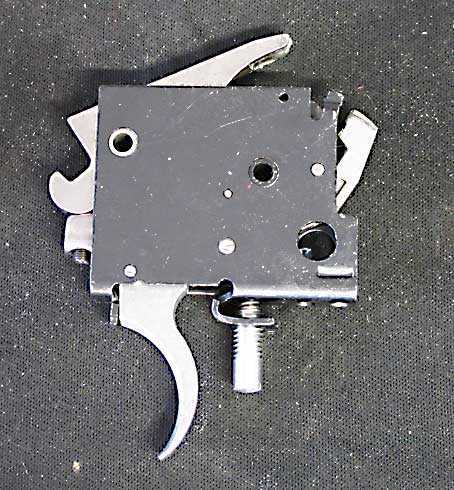 The Rekord is uncocked. 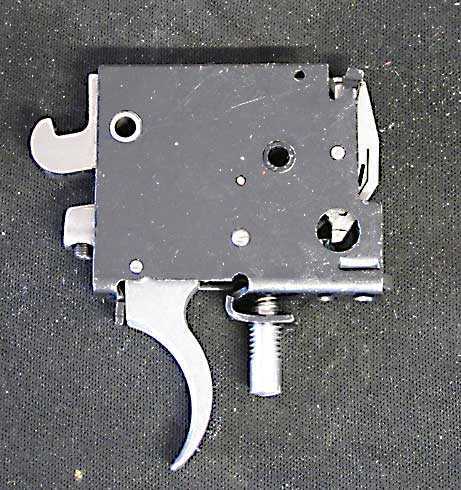 The Rekord is cocked so it will go into the end cap easier.

There were a lot of steps in today’s report, but I found the Vortek kit very easy to install. It was the rifle that threw me a curve. Now that I have warned you — you can avoid my mistake.

I had hoped to test the velocity of this tune today, but when I made my blunder it cost me a lot of time backing up. So this is the end of this report, and I’m not sure I want to test velocity next time.

Perhaps next time I will test accuracy with another peep sight and then test velocity after that. That will give this tune a chance to settle in. 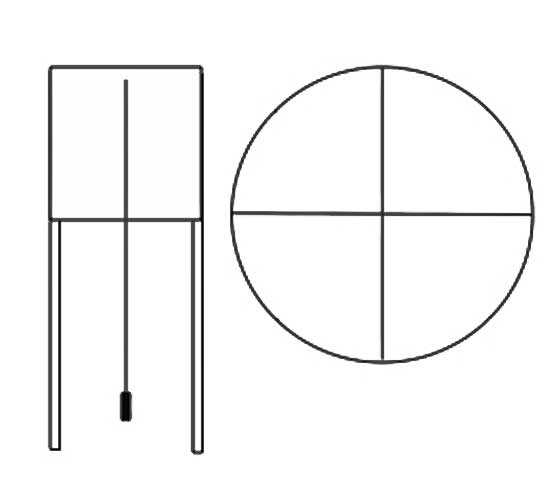 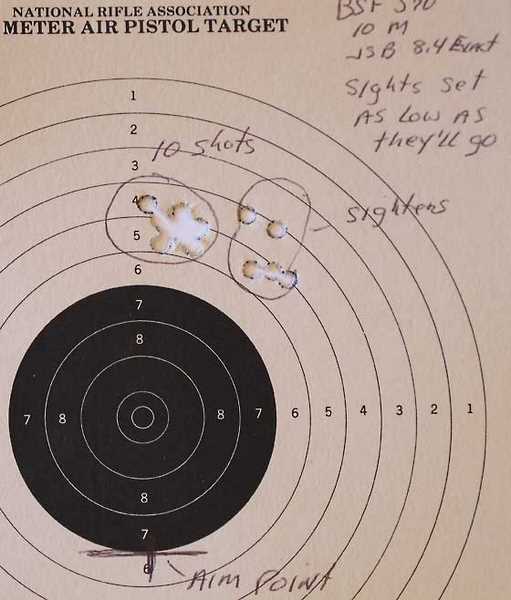