Today we look at the accuracy of the S&W model 29 BB revolver shooting pellets. This is a test you readers asked for, so sit back and enjoy!

For this test I moved back to 25 feet. If you are going to shoot pellets you want to do it from farther away than 16 feet, which is five meters.

I used a sandbag rest on my MTM shooting table to rest the airgun. This stabilized the revolver more than the UTG Monopod rest. The long barrel rested on top of the bag and I shoved the revolver into the bag for stability. I was able to shoot with the handgun held at arm’s length which made the sights look right.

I shot 6-shot groups at 10-meter pistol targets, using a 6 o’clock hold on the bull. And I shot single action all the time.

I used a tall thin box filled with rubber mulch for today’s test, as well as for the BB test in Part 4. It’s just 4-inches deep but large enough that I don’t need a backer board when I shoot close. It works perfectly and stops everything cold. It doesn’t take much to stop BBs at 400 f.p.s.

First to be tested were H&N Excite pellets. As reader Roamin Greco told us, the Excite pellet is a great value for the money, and they did quite well the first time I tested them.

Six Excite pellets went into 0.939-inches at 25 feet. The group is inside the bullseye, which is very good. And as it turned out, this is the smallest group of the test. So Excite pellets were worth trying! 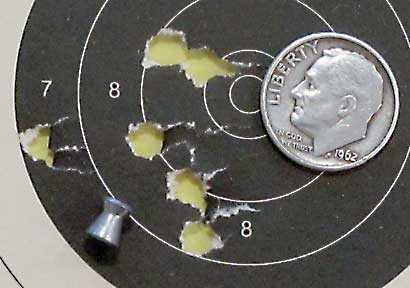 The next two pellets are domes and I thought they would not put clear holes in the target paper, so I put a wide band of Scotch brand packing tape (not the stuff with the threads running through — the clear stuff) in the back of each bullseye so the pellets would cut sharper holes. It didn’t work. The holes were still ragged and the tears were larger because of the tape.

Next to be tested were six RWS Superdome pellets. They made a 1.568-inch group at 25 feet and this group was very well-centered.

As you can see there are really two separate groups that I can’t explain. I noticed no difference in the sight picture for this target compared to the others. 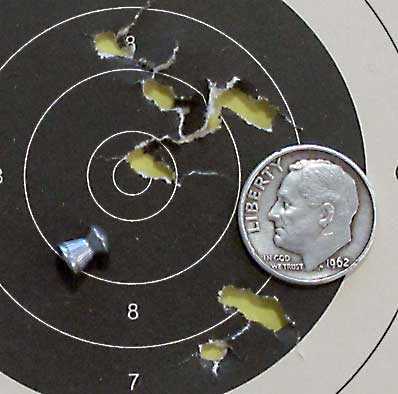 I must say that with the sandbag rest the revolver is much steadier. And the trigger is also getting smoother. I believe it does smooth with use.

The last pellet I tested was the Falcon from Air Arms. Sometimes they are quite accurate. Other times not so much. This was one of the other times.

The model 29 put six Falcons into a 1.923-inch group at 25 feet. It is the largest group of the test. And once more the tape on the back of the target led to tearing. 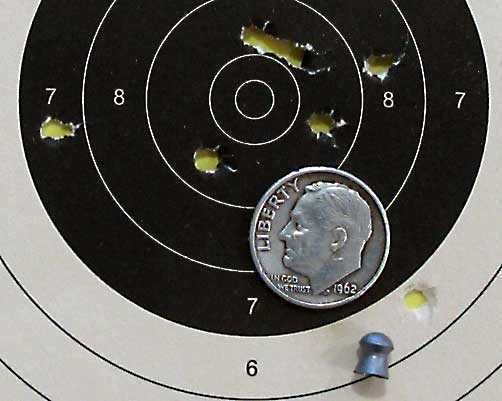 Now for something different. I knew someone would ask me to test BBs from 25 feet, now that I had a steadier rest, so I just did it. I chose the Crosman Black Widow BB that seemed to be the most accurate in the Part 4 test.

I did nothing different for the Black Widows — just shot them like the pellets with a 6 o’clock hold. Six of them made a 1.266-inch group at 25 feet and they are very well centered. In fact three of the BBs are in the center of the bull. This target was not taped in back. 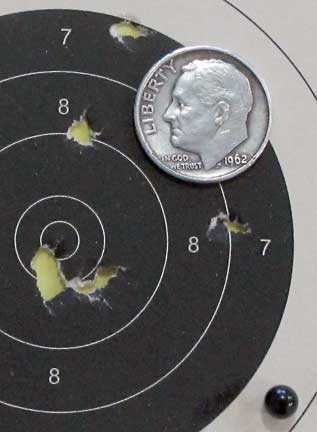 Well, the BB out-grouped two of the three pellets I tested today. Doesn’t that say something?

That’s it for the new S&W model 29 BB revolver. It’s very realistic looking and a hoot to shoot.