Today we back up to 25 yards, to test the accuracy of the TX200 Mark III that’s been tuned with the Tony Leach kit from there!

I shot the rifle from a sandbag rest with the rifle resting directly on the bag. I shot 10-shot groups today because we are testing the accuracy of the rifle with the Tony Leach kit. The 5-shot groups I shot at 10 meters in Part 6 were more to show that I had installed the kit correctly, though we did see some amazing accuracy.

Besides the JSB Exact 8.44-grain dome that we know is accurate, I also tested the 8.44-grain Air Arms dome that JSB makes. And I also did a first test of the .177-caliber Apolo Air Boss pellets. I will have more to say about them when we get there.

As a reminder, the Meopta MeoPro Optika5 4-20X50 RD BDC3 scope is on the TX200. I did illuminate the central dot at the highest illumination for this entire test.

I also dropped the rifle before the test. I had leaned it against a chair in my living room, so it fell on a padded carpet. I didn’t hear it fall, but I wanted you to know that the scope and mounts took a whack.

I didn’t tell you this in Part 5, but when I installed the Tony Leach kit I lost a part. It was a tiny E-clip that holds the end of a pin — in this case one on the cocking linkage that allowed me to remove the sliding compression chamber. The clip is very small and when I removed it I heard the dreaded “bink” and it was off into the fourth dimension. It will probably come back as a sock in my drier which is good because I can always use more sox.

So I ordered two more clips from T.W. Chambers in the UK. They weren’t cheap, but if I tried to find one that fit here I probably would have ended up with a hundred dollars worth of useless stuff. Do they even come in metric and U.S. sizes? 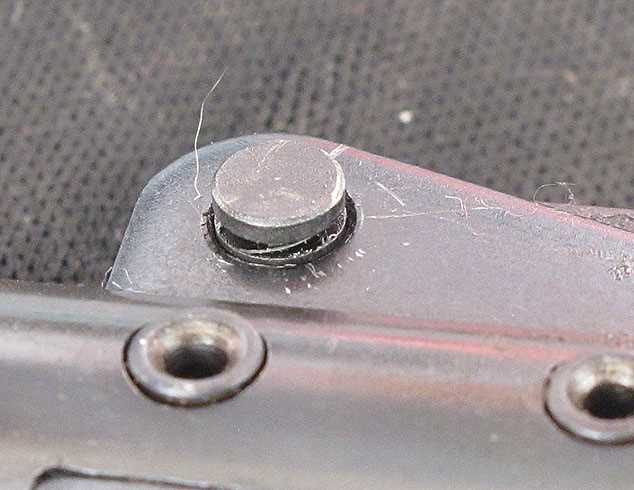 This is the pin that lacks a clip to secure it. 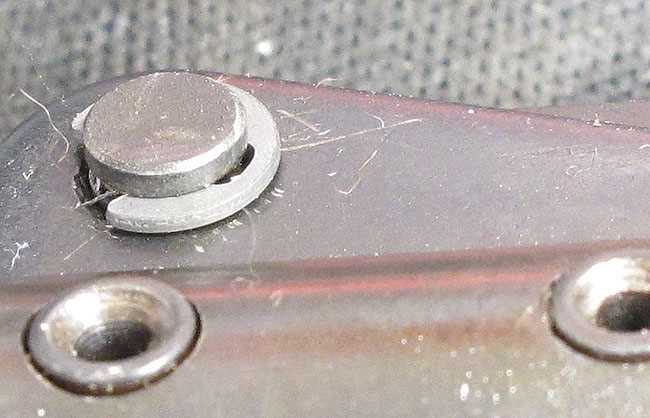 Thanks to T.W. Chambers, a new clip is in place.

The pin never moved from where it was, despite the rifle being cocked and shot numerous times. Still, I wanted the clip there to hold the pin in place.

The rifle was on at 10 meters before. But the stock has been off and the rifle has fallen to the floor. I didn’t shoot up close, but I did allow a lot of room on the target in case the rifle was off. The first shot hit two inches above and one inch to the left of the aim point. Shot two came over to the centerline and I started the first group with the third shot. The pellets landed below the aim point that was the center of the bullseye. And that preserved my aim point for the entire test.

The group hit below the bull and centered on it, left and right. Ten JSB Exact 8.44-grain pellets went into 0.218-inches at 25 yards. If I had stopped at 5 shots the group would have probably been less than 0.15-inches. The rifle didn’t move much when it fired, so I could see the pellet going through the target. The first 4 shots went into the same hole and only on shot 5 did the group begin to grow.

I just did a quick look around the blog and I think this is one of the smallest 10-shot groups I have ever shot with a springer at 25 yards. But wait — there is more!

I know that the Air Arms 8.44-grain dome is equally as accurate as the JSB pellet. I hadn’t tested it in the newly-tuned TX yet, so now seemed like the perfect time. This time 10 of them went into 0.28-inches at 25 yards.

The last pellet I tested was the .177-caliber Apolo Air Boss pellet. This pellet is a wadcutter that’s not really suited for grouping at 25 yards, but the TX is such an accurate rifle that I thought I’d give it a go. At 25 yards 10 pellets went into an open group that measures 0.57-inches between centers. It’s actually not bad for a wadcutter at 25 yards, but outclassed by the two domes I tested before.

Okay, I have tried to contact the folks who import the Air Boss pellets many times since the SHOT Show. They don’t answer their email, or the contact form on their website. These might be good pellets but if you can’t buy them, who cares? I’m not going to play sleuth to hunt this company down. If they decide they want to do business in the future, maybe I’ll give them another look. For now, though, this will be the last test of them.

This TX200 Mark III is now my favorite spring-piston air rifle. I am confident of where it will shoot and it has a perfect trigger. The scope is also perfection and, in a rare moment of good decision making I have decided to not remove this scope from this rifle. That makes two air rifles that have dedicated Meopta scopes — the other one being my Air Arms S510 XS.

Sharp Ace: The Sheridan of the orient?

The rise of the BB gun: Part 2