The Texas Airgun Show will be held on Saturday, September 24, 2022. BB will be there with three tables of guns priced to find new owners. And the next day there is a field target match. So shooters, save up and join us at the show.

Today is the culmination of this special 2-day report. I have allowed you to look over my shoulder as I attempted to shoot a sub minute of angle group with a spring-piston air rifle. I could have done this more easily with my TX200 Mark III that has the Tony Leach 22mm tuning kit installed, but I had other things I wanted to do and so I chose a breakbarrel Beeman R8 for the job. People ask me all the time if breakbarrels are less accurate than fixed barrels and I tell them they aren’t. But they can be more difficult to shoot accurately.

Yesterday you saw six groups that were shot with a Hawke 4.5-14 Sidewinder scope mounted on the rifle. Though I did well I never got that sub quarter-inch group. So I changed the scope to my Meopta MeoSport 3-15X50 that I wanted to mount in the first place. It turns out that the Meopta scope rings will only fit a Picatinny scope base and the UTG adaptors that convert Picatinny to 11mm dovetails will not work with these mounts because of how they are designed. If you want to know more, read yesterday’s report.

But the MeoSport scope has a 30mm tube that will fit any 30mm scope rings. They don’t need to have the line on them. So I removed the Hawke scope and mounted the Meopta for a test.

I then shot more three groups late last Saturday afternoon, after scheduling Part 1 for publication. I was still shooting from 25 yards with the same JSB Exact RS pellet. Here we go.

This first group looked so good through the scope. But when I measured it, it turned out to be 0.27-inches between centers. It needed to be smaller than 0.25 inches. But it gave me confidence.

The first group was five JSB RS pellets in 0.27-inches at 25 yards. So close!

I figured I had things down now. But group 2 blew up in my face. Five pellets went into 0.598-inches at 25 yard. And yes, that pellet on the bottom was the last one fired. The other four are in 0.389-inches, which is a heck of a lot better. No — there were no called pulls. I wish!

The third group went into 0.321-inches at 25 yards. Another okay group, but still no cigar.

I shot these three groups at the end of a long day. It was Saturday and I was working outside and in the attic, so I was worn out. I thought that would help me settle down but apparently it didn’t — at least not enough.

Okay — at this point some of you guys are saying that maybe this rifle doesn’t shoot as well as it used to. Or maybe BB, who is 12 years older than in 2010, doesn’t shoot that well anymore. Hogwash! I’m shooting from a sandbag rest. I know many of you want me to use a vise to hold the rifle, but I have been doing this long enough that I know what I can and can’t do. And this R8 IS that accurate.

I don’t work on Sunday, but on Monday I got up at 2 a.m. and, after getting the cat fed, my own breakfast and the house running, I shot two more groups. Before doing that I fired three shots to “warm up” the R8 powerplant.

The first group is five JSB RS pellets in 0.435-inches at 25 yards. I know it’s a bigger group, but the last 4 shots went into 0.283-inches and I knew I could do better. I was back on the edge again! I can’t explain it, but when it happens you just know it.

Okay, this is a note to BB from BB. I have to remember how this is done. And it includes something I haven’t told you before — something that made a huge difference! Here is exactly what I did for this final group.

First — I had the sandbag pulled all the way back so my trigger finger was jammed into the bag. But I still tried to “hold” the pistol grip as loose as possible — a sort of sandbag artillery hold, if you will.

Next, and I haven’t told you this yet, but I did it on all three days for every group I have shown, so it isn’t the special something I mentioned. I don’t have a bubble level on the R8, so I lined up the scope’s crosshairs with the numbers on the target bullseyes. If you don’t level the rifle the same way for every shot you’ll find it almost impossible to shoot your best groups.

I remembered this special thing on day two and again on day three. It’s where those tight groups of four came from. Aim the rifle and shoot! Don’t keep trying to refine the sight picture, and also remember that there is no way you can keep the crosshairs steady. They will always move. Your job is to allow them to move by the smallest amount you can. I can keep them moving a little less than a tenth of an inch at 25 yards — about the diameter of the 10-dot in a 10-meter target bullseye.

This final group measured 0.188-inches between centers. It’s BETTER than what I did in 2010 — so phooey on my age! Can I do it again? Sure. But I need THIS rifle, THIS pellet and THIS scope. And, in doing it I’ll probably shoot many more groups that are larger than a quarter inch. That’s what it takes for me. 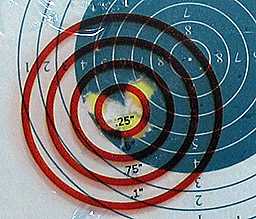 And there is the proof — a sub minute of angle group. See those thick red rings? The precise measurements are in the centers of each red line. I measured them on the quarter and half-inch circles with a dial caliper.

Could this be done with the Hawke scope? Absolutely! You see, when I removed that scope from the rings to mount the Meopta scope I discovered that it wasn’t shimmed under the rear of the tube. I thought it was, but it wasn’t. Oh oh! The elevation was adjusted too high. That’s why the erector tube was floating and why you saw stiction in the sixth group in Part One. It wasn’t the scope’s problem. It was BB’s problem that he didn’t tell you about until now. And I did shim the Meopta scope at the rear. Remember in Part One where I said I would come back to the 30mm scope rings? This was it.

…shoot other pellets? Come on, guys and gals. Surely you understand why I didn’t. Change one thing at a time. Don’t worry, you’re going to see more of this Beeman R8 in the days to come and there will be other pellets.

…shim the Hawke scope and make it work? Because I already told you that I wanted to test this MeoSport scope with this rifle. Once it dawned on me that any 30mm rings will work I was off to the races. By the way, Meopta, this spring-piston air rifle does recoil. It doesn’t recoil very much, but it does recoil a little. I just wanted you to know.

In this special two-part test I have pulled back the curtain and let you see almost everything I did. I did it so you could appreciate what it takes to put five pellets into a group that’s smaller than a minute of angle at 25 yards when shooting a spring-piston air rifle. Was it slow and excruciating for you? If so I don’t recommend trying this at home. If you want to participate in the SubMOA Challenge, shoot a precharged pneumatic air rifle.

38 thoughts on “Beeman R8 and the SubMOA challenge: Part 2”