Today we start looking at the Umarex Gauntlet .30 PCP air rifle. We will all be interested in discovering what this giant of a precharged pneumatic (PCP) air rifle is, as well as what it can do.

This Gauntlet .30 is the largest caliber of the Gauntlet 2 series rifles. The Gauntlet 2 also comes in .22 and .25 calibers. The first Gauntlet is a price point PCP, but the Gauntlet 2 is $630 (or $430 — depending on who sells it and when you look at their website).

I have tested the Gauntlet 2 for you seven times so far. The one I’m still testing is a .25 caliber, and I’m so glad it is because that leads me to the first question — why a .30?

There are several answers to this question. The first one is perhaps the most important. This rifle exists to compete at extreme ranges in benchrest competition. Ever since Gauntlets showed up in competition several years ago and surprised everyone by placing high against all-out competition PCPs there has been a demand for more. Those Gauntlets were .25 caliber, and, while those of us in the larger world of general airgunning consider the 6.35mm pellet to be supreme, it gets outclassed in windy conditions at 100 yards. The bigger heavier .30 is more stable when the wind blows.

If the wind is not a factor the .22-caliber rifles stand a good chance. But when she blows you need the extra weight of a heavier pellet, and that’s where .30 caliber comes in. But you don’t make production air rifles for a hundred guys and gals around the world. There has to be more.

Extreme airgun sports are followed closely by the “here, hold my beer” crowd who participate as much online as at the range. Like NASCAR fans, they follow the sport closely and pay attention. There may be 30 drivers on the track, but 150,000 sit in the stands, watching. No, they can’t afford the megabuck investment for a competition-ready car/rifle, but they darn sure will shell out for one when the asking price is under $630! I say $630 because that is what several websites say, but what do they know? As this is published Pyramyd Air says $430. And, they know they can shoot their Gauntlet .30 at stuff other than targets.

The prices for this rifle were changing as I researched this product. I saw prices of $430 and $630. Check with your dealer before you commit.

The Gauntlet .30 produces a muzzle energy of right at 100 foot pounds. That’s close to what a .22 long rifle standard speed bullet produces and it’s within striking distance of the .25-caliber AirForce Escape! That’s a lot of bang for your $630. It doesn’t take a PhD to figure out that this is a fine air rifle for hunting. Maybe not so much in thick brush, but in places where you can walk relatively unencumbered, one of the Gauntlet .30s should dominate.

Given the power, the pellet weight and the reputation for wind-bucking, the Gauntlet .30 should even be a fine close-range varmint rifle. And the wide open spaces where prairie dogs and woodchucks live are perfect for shooting off a bipod or sticks.

You can see from the pictures above that the Gauntlet .30 is similar to the Gauntlet 2, but they are not the same. The Gauntlet .30 says so on its stock while the Gauntlet 2 just says Gauntlet 2. The Pyramyd Air website changed as I was writing this report and now includes the .30 caliber Gauntlet with the .22 and .25 caliber rifles.

Like the .25 caliber Gauntlet 2 this rifle is a big ‘un, at 47-inches overall and a weight of 8.5 lbs. Of course a scope that you have to have and any other accessories will increase that.

Umarex says you’re going to get about 25 shots per fill and several reviewers have already seen 24 good shots, so the shot count is acceptable.  Come on, guys — this is really a big bore!

No baffles in the shroud

By making this rifle a Gauntlet 2, Umarex has confused the retailers with the other two calibers. Some of the specs apply to all calibers while others are specific to the .30. That’s going to take some time to sort ou, if indeed it ever is.

Umarex has not put baffles in the shroud of the .30, because there is too much air to deal with. Instead they have threaded the shroud with a 1/2X20 UNF thread for an airgun silencer. This is a big bore, folks. You need that “can” if you plan to shoot around civilization.

I watched Tyler Patner’s rteview of the .30 and noted that the muzzle blast was recording 121+ dB. Now, I don’t know where that was recorded, but it’s louder than a .22 long rifle standard speed. This ain’t a house gun guys!

The .30 has a 7-shot rotary magazine that sticks out above the Picatinny rail on top of the receiver. The rifle comes with two of them, plus a degassing tool and a few small o-rings.

Speaking of that rail on top of the receiver, the one on the .30 is machined right into the receiver, instead of a separate part held on by screws. This is another small difference in the .30 and it gives at least the sense of a more solid base for a scope, for you benchresters.

The remainder of the rifle is identical to the other calibers.

This report changed several times as I was writing it. First, several websites were changing things like specs and prices right under my nose. And, as I discovered what the .30 caliber Gauntlet really is, I realized this is a big bore test. Well, from this point on, that’s how I will approach it. 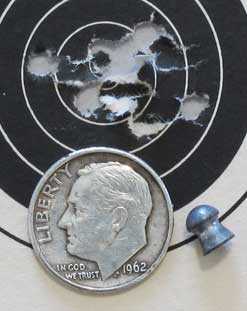