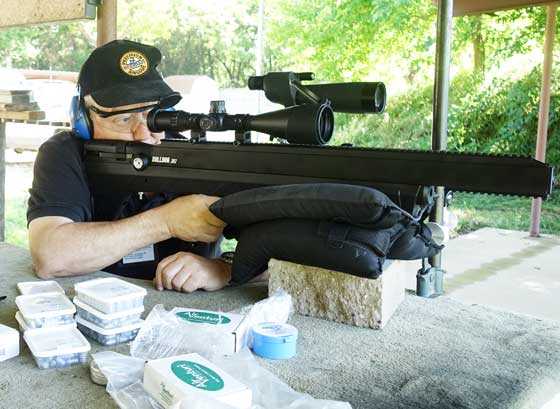 I think I’ve decided what the Bulldog is best suited to do. Besides being a very handy rifle for medium-sized critters like coyotes and javelinas, the Bulldog is a wonderful big bore for general plinking. I know that a lot of airgunners buy big bores without thinking of the use they’ll put them to, and plinking seems to be the top choice; but most guns are not suited to a lot of shooting. They use too much air and constantly have to be topped off. The Bulldog will give you 10 good shots on a filll and with the right ammo, it seems like the ideal big bore to plink with. read more

The good news is that, while I was busy, Johnny Hill of Tin Starr Bullets made me a bunch of new bullets. I like his bullets because they’re pure lead and very soft. That seems to make a difference when it comes to accuracy. Last time, I tried his bullets that were sized 0.356, but today I’ll show you what they do at 0.357 inches. The difference is dramatic! read more 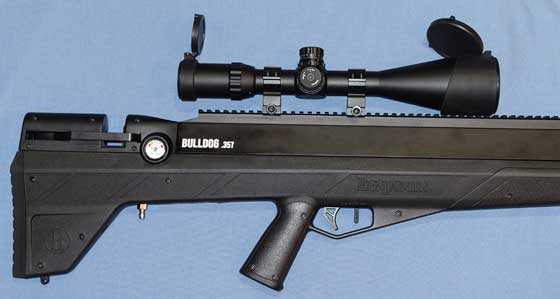 This is the first time I have seen this particular Centerpoint scope. Pyramyd Air doesn’t carry it because it’s brand new and won’t be commercially available until later this year. I like 4-16x scopes anyway, and this one’s bright. The duplex reticle has mil-dots on both lines and appears to be etched glass. The crosshair is fine, but the mil-dots make it easy to find. The parallax focus is on the left side, where it is handy for adjustment. All in all, a nice scope! read more

The Bulldog is listed as a .357-caliber rifle, so I took several different bullets for this test. Crosman sent me several boxes of their 145-grain Benjamin Nosler Ballistic Tip bullets, which are lead bullets with a red polymer tip that forms a pointed nose. I knew they were great big bore bullets from when I tested the Rogue. read more

Today’s report should start some discussions! I’m starting the review of the Benjamin Bulldog big bore air rifle. Big bores are very popular these days, and we have a number of them to review this year.

Bullpup
If you read Part 1 of the Ft. Worth airgun show last September or Part 1 of the 2015 SHOT Show report in January of this year, you’re aware that the Benjamin Bulldog is a .357-caliber big bore from Crosman, and it’s built in the bullpup style. read more