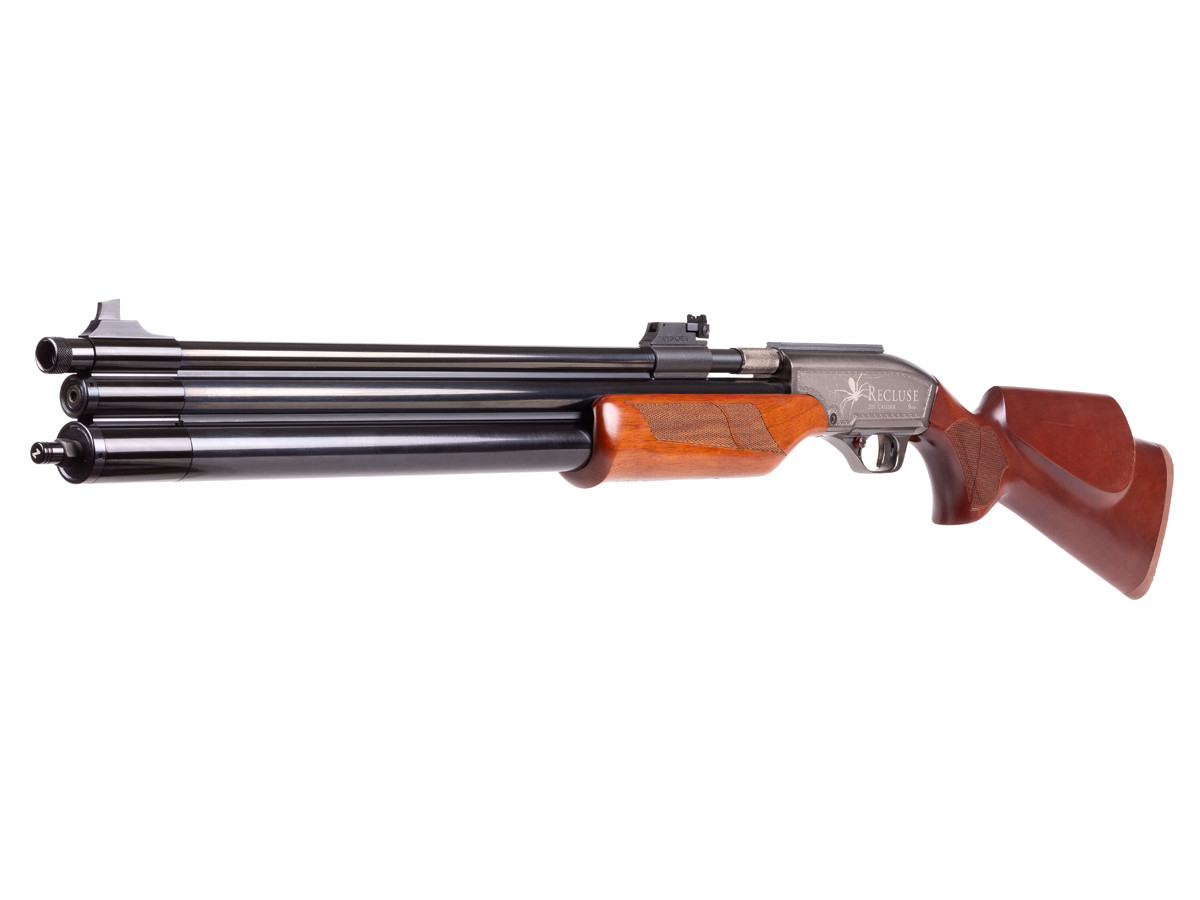 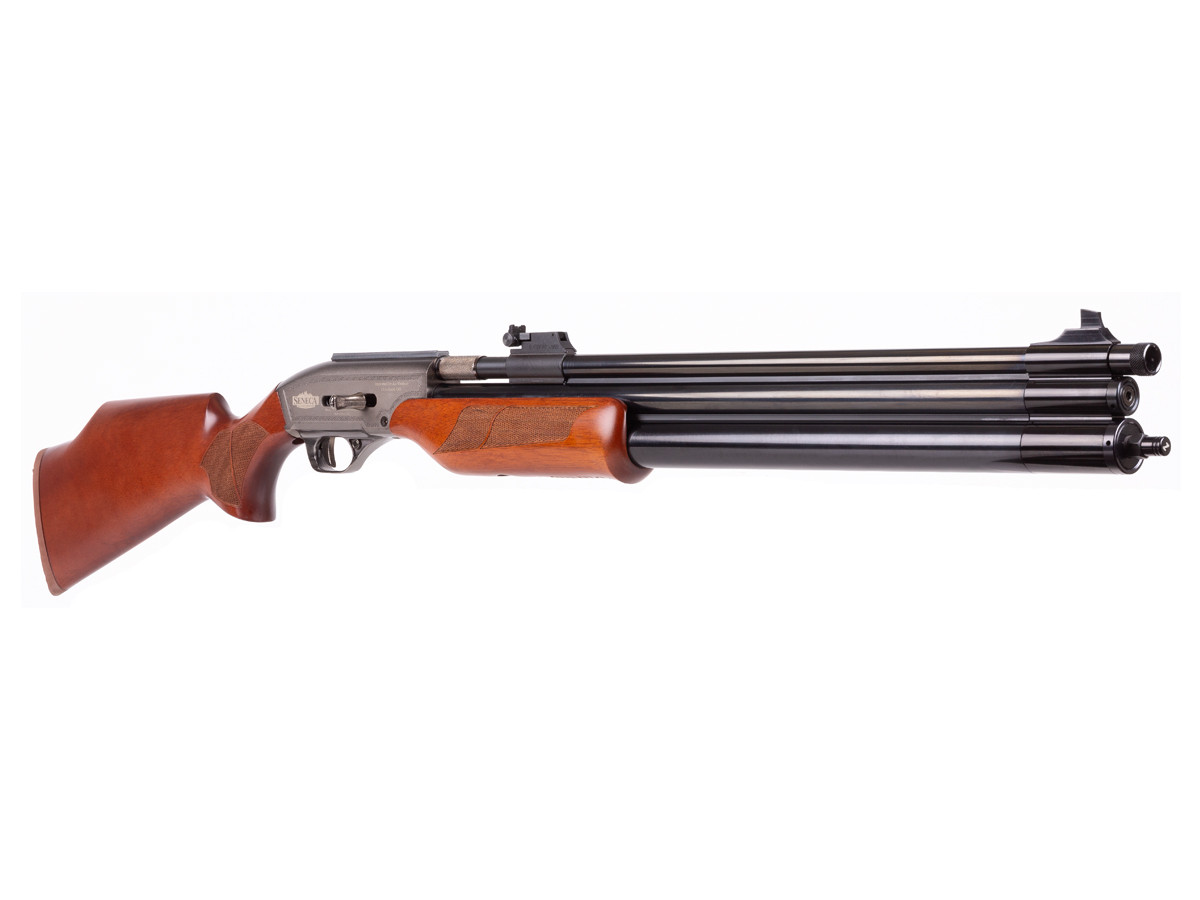 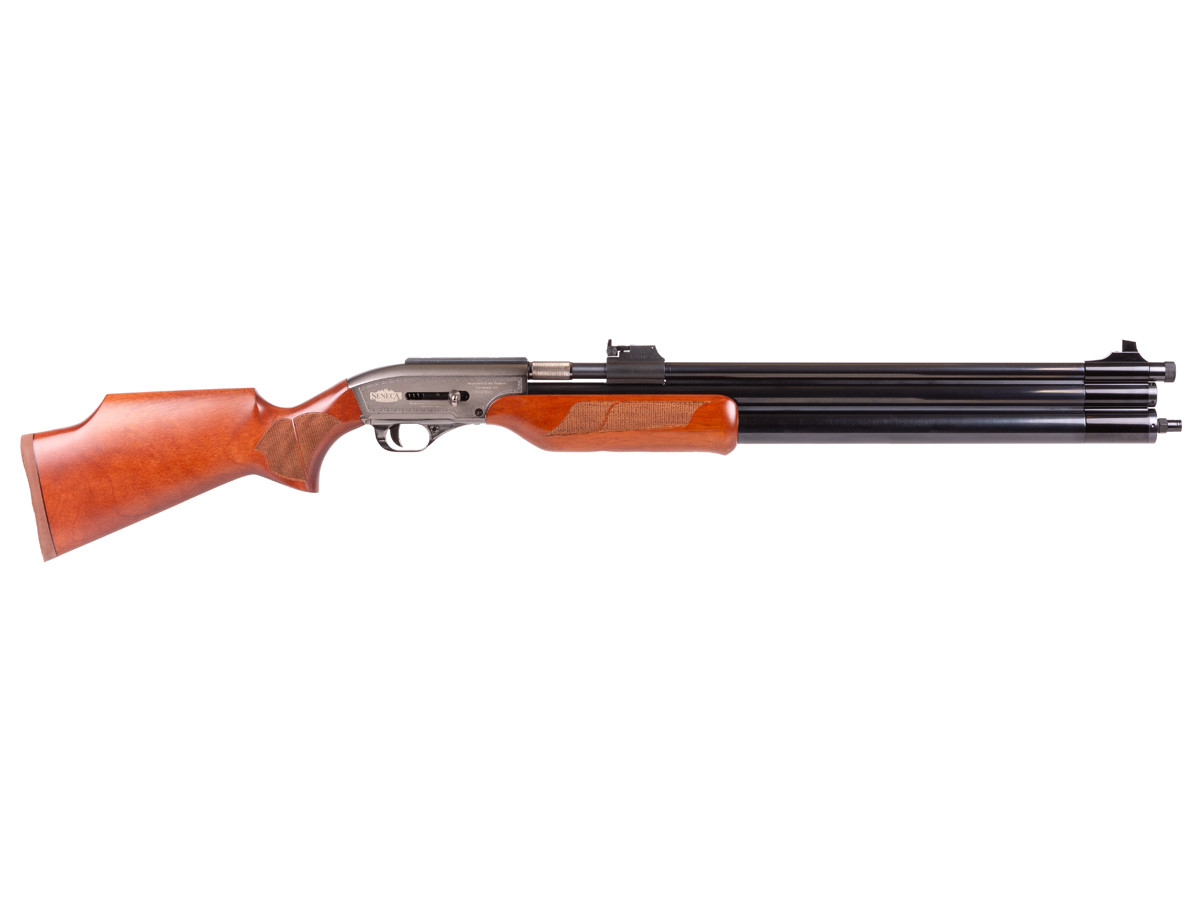 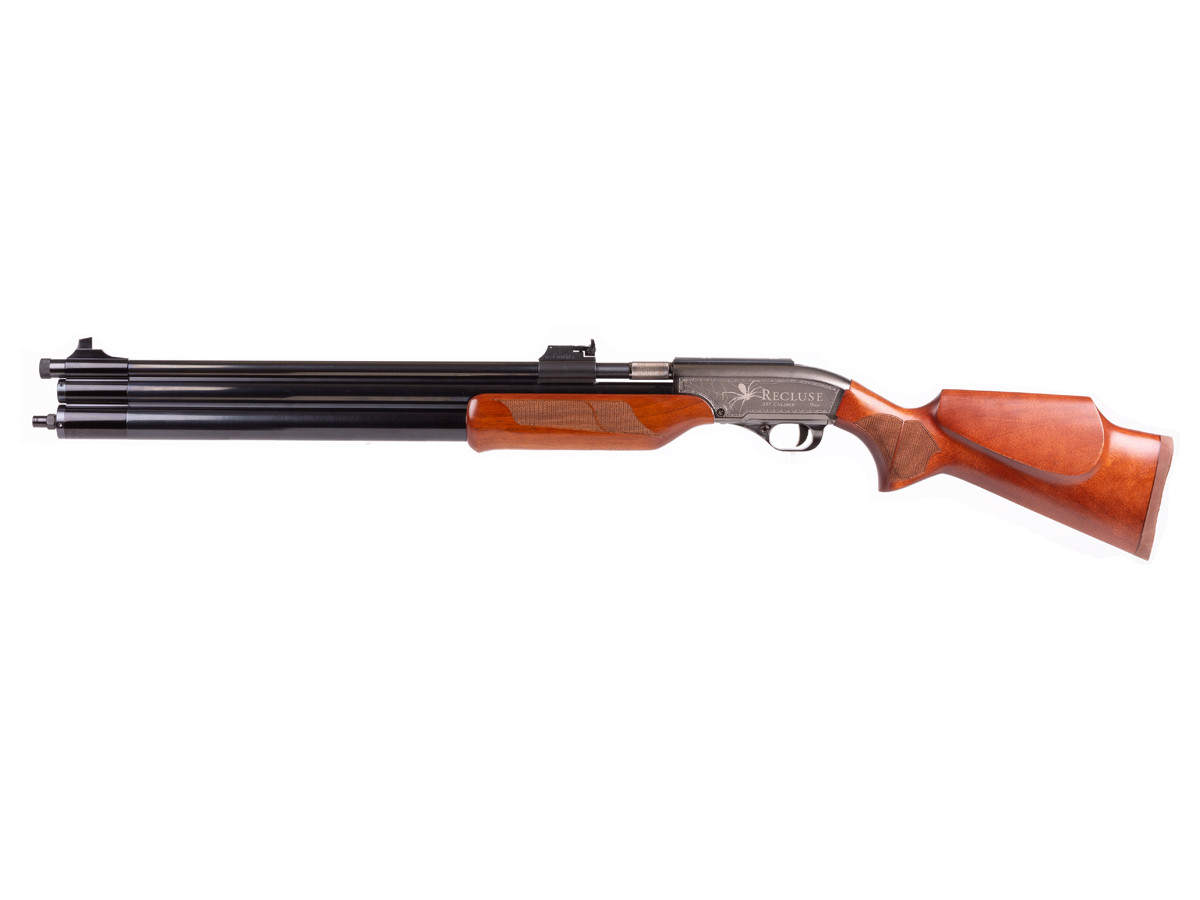 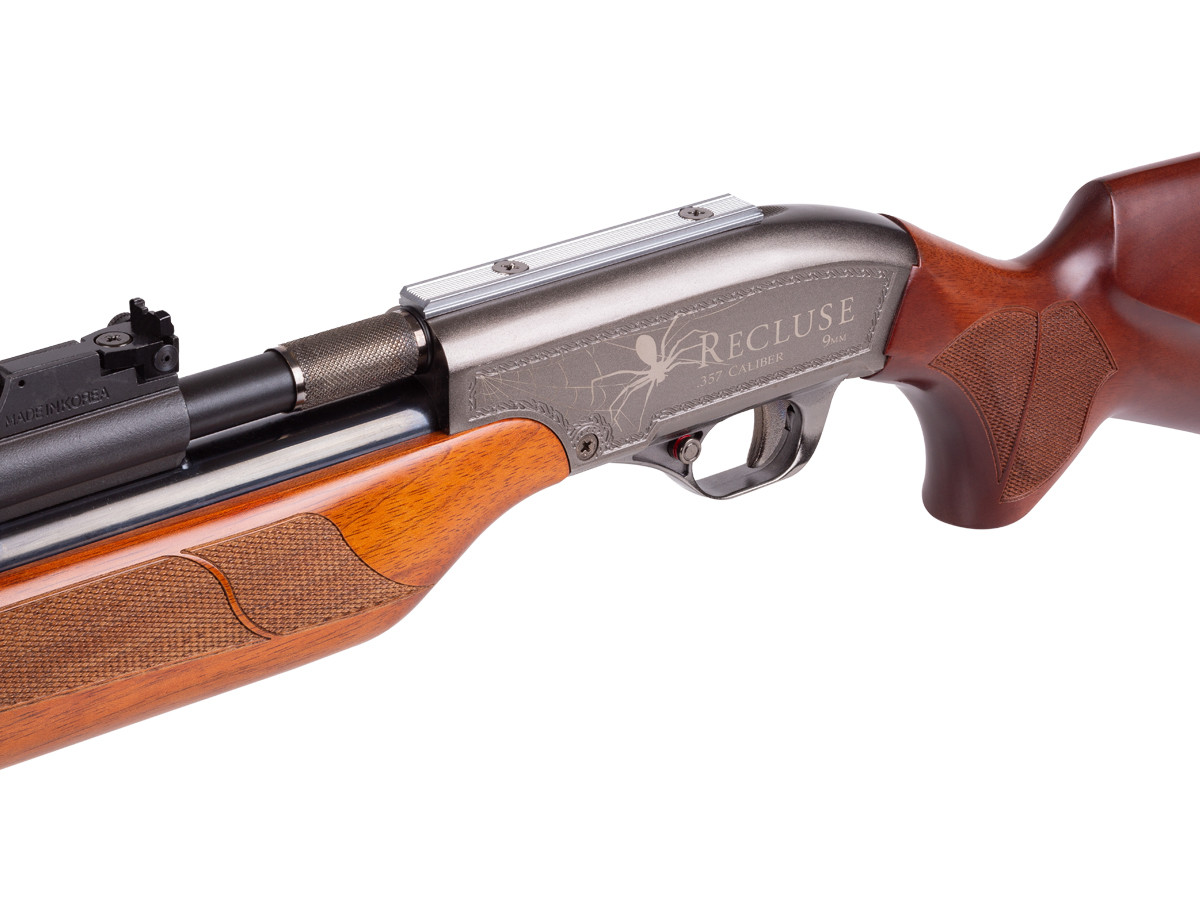 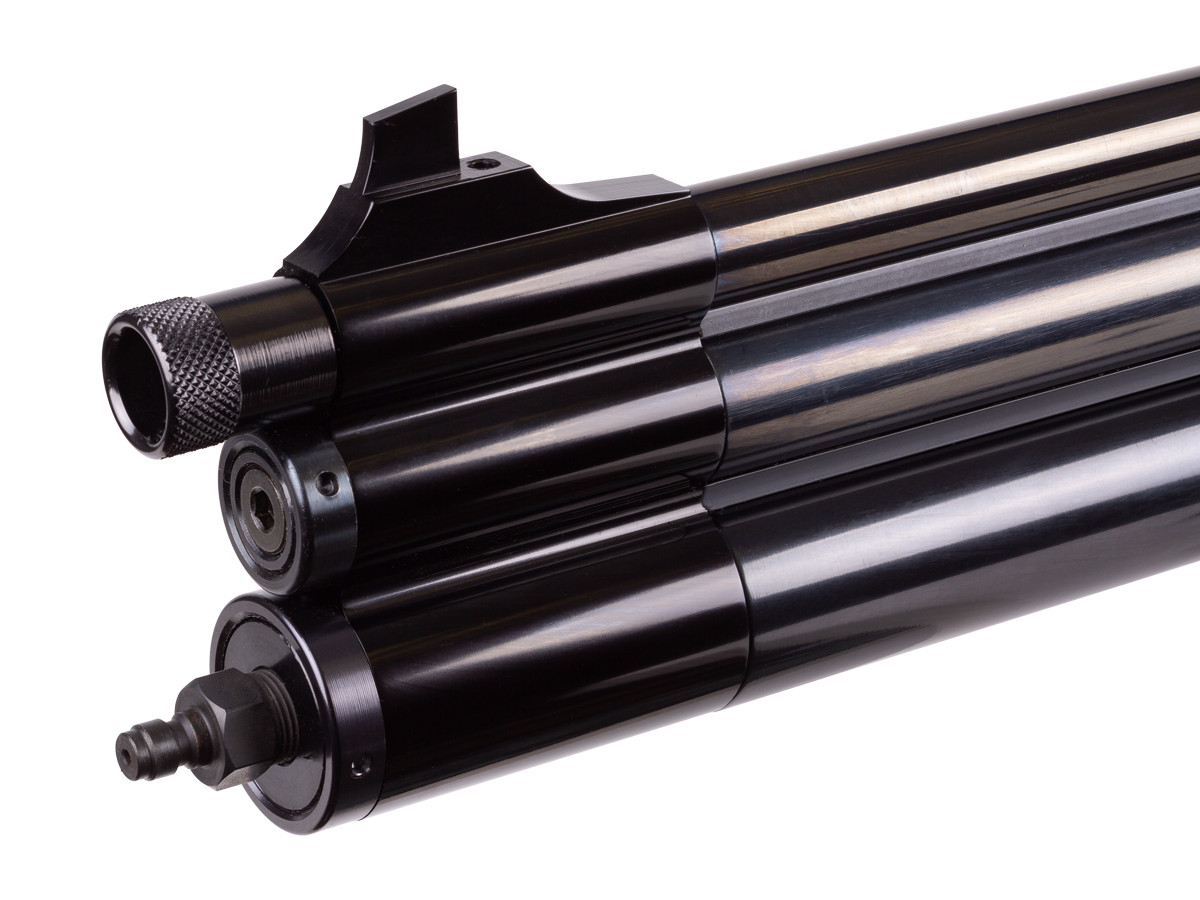 If you like to hunt and do it extensively, then the Seneca Recluse .357-caliber air rifle with a 500cc reservoir will give you lots of shots. Great for hunting woodchucks, nutria, possums, rats, raccoons, crows and similar-sized pests.

How many shots will you get from your 500cc Recluse? Our tech department filled their Recluse dual-tank air rifle to 3,000 psi, loaded it with 76-grain bullets and let loose! They shot the first 4 shots on high power. The first shot was 925 fps. Shot 4 was 890 fps.

This shows you what one gun can do. Velocity and psi levels will vary gun to gun.

Mine doesn't hold air. Shipped from factory without any testing. I took it to a dive shop to get initial pressure so valves and o-rings would seat. Still loses air from the muzzle / breach. When disconnected from the air connection, it also loses air. If I were selling these, I would not just recommend the service and sighting, I would do it as a matter of service. I received mine and would not hold air. 3 weeks for me to return and replace. If it were my company, I would require testing and sighting before shipping. Money saved when you consider employee time solving issues. Send out a tested and sighted gun and reduce the wasted employee time for solving problems. A little extra care would save a lot of money in customer service. AND I would be a happier and possibly return customer, not so sure now.

Expect issues with the gun, may need to return for service. Pay the extra money for testing and sighting (just to save aggravation and to be sure valves etc. are seated) Can't rate it because I can't shoot it.

I really liked the power that it has. I have the 357/9mm. I like the number of shots I get. . . I like the ability to cast bullets for it. I like the double air chamber for more shots. Since I have not had this gun very long, I cannot be objective on longevity and other things that may or may not happen as I use the gun more. I gave it a 4 overall for the following reasons. 1. Trigger pull. 2. Loading. 3. Cocking scratchiness. It is not a smooth pull. But in time, it probably will smooth out. 4. Accuracy (so far). This accuracy could be the result of such a hard trigger pull. Eventhough it has about a 1.5 inch CTC at 40 yards, I think with time and a trigger fix to lower the poundage, the accuracy should improve. I also have not tried a number of different pellets in the gun. Thus, I may not have the Golden Pellet that shoots cloverleafs yet.

1. Change the way it cocks. . .It is scratchy? when you pull back the lever, making it hard to stop in low power. 2. Definitely change the trigger mechanism. . .it has a VERY VERY hard pull. 3. Somehow add a sling mechanism. . . My Recluse is HEAVY.. .I do not see how folks say it is a light gun. I also have the double chamber 500cc. 4. Change the way you load it. You have to push the ammo forward and up into the chamber. Your fingers cannot push it forward enough, I use another pellet to push. 5. No way to lubricate the O-ring under the sliding silver cover. You can lubricate the O-ring on the back half of the loading chamber, but the ring on the front is unreachable. You could play the game of tilting the gun and dropping chamber oil in hopes of lubricating the ring. 6. The rear sight could be moved forward, just enough to where you can get a Scope mounted.

1. Make sure you have HIGH scope rings, or your rear sight will be in such a way that you cannot mount your scope. You can move your scope back a ways to solve this problem, but. . . it shouldn't be a problem in the first place. 2. Accuracy is fairly nice. . .I am getting about 1.5 inch groups at 40 yards using Diabolo 81 grain pellets. But I believe that they group could be smaller if the trigger was something like 2 to 3 pounds. 3. The gun is heavy, and that helps out with the Trigger Pull being so heavy. The gun is heavy enough to help compensate for movement when pulling such a heavy trigger. 4. There really isn't much power difference between low and high power. maybe 50fps? Yet on high power you are burning up more air. To me it isn't worth it. I shoot low power. 5. I have casted 85 grain and 105 grain 356 bullets for the gun. both work well. 6. It will blow through a 2x4 with 81 grain pellets. Don't under estimate the power of this gun. 7. I would purchase it again

I own several air rifles, most all are .25 cal. One a .30. None of these would drive a pellet through a 2x4. So I order a Recluse refurb from PA on Thursday afternoon. Saturday morning it's on my porch. I had to attach the trigger but it was rather hard to do, my allen key rounded out the head on the final turn. The stock is loose so I tightened the screw but it's still loose. I wanted the single tube, but they sent a 2. I thought I'd send it back, until I took that first shot. I can only get it to low power. That's enough for me. I don't know if it's defective or I just don't have the muscle to get it to 2. Low power is enough so I slide in a pellet and it blasts that pellet right through a 2x4. All my other guns are quiet, but this sounds like a 20 gauge shotgun. It is LOUD! It being a refurb it has some minor scratches in the wood but the metal is deeply blued, beautiful. Filled it to 200 bar and shot it 6 times, it went down to 135.

It could come with a suppressor. It's hard to cock. I read it will loosen up after 20 shots, but it's a refurb, unless the hammer and spring were refurbed. It's a little heavy but with all that's going on with this gun It'll do.

If you order one specify which Recluse you want, single tube or two. It uses a lot of air. If you shell out that much cash for a nice rifle, buy a compressor! I bought a battery powered compressor from Amazon for $420. It will pump to 300 bar. It's not my go to rifle unless a bear stomps through my yard. But it fun to see wood shatter from the back of that 2x4. I'll have a follow up after a few hundred shots.

Thank you for your comment!
I've owned this recluse for 4 months, hundreds of shots. It's still hard for me to cock but I can manage. I did find one important thing to know, when you load the bullet it a good idea to use a small screwdriver, or nail to push the bullet in, if not the bullet can slide back in the barrel and jam when you fire. I wanted the single tank and I think I have one coming soon. It's loud, but Neil Clague makes a great suppressor. I mounted a cheap scope and it works just fine. It could weigh a couple pounds less but this gun is very well made.
I returned the refurb Recluse I bought some weeks ago. It had a minor defect, and I thought I'd buy a new one. It was sent directly to Will Piatt for his power tune. It was there for just over 5 weeks. Well worth the wait. I didn't have the chance to fire it before but now I stacked 2" of plywood together and it blew through all them with a 105 grain bullet. These rifles are very well made, you won't find any plastic on them. I'll keep this rifle but sell all the other ones I have, except my Neutron Star. I live in Ohio and Pyramyd charged me Ohio sales tax, but I don't care, Pyramyd gets all my business.
Add comment to this review
View All Reviews
+ Load More