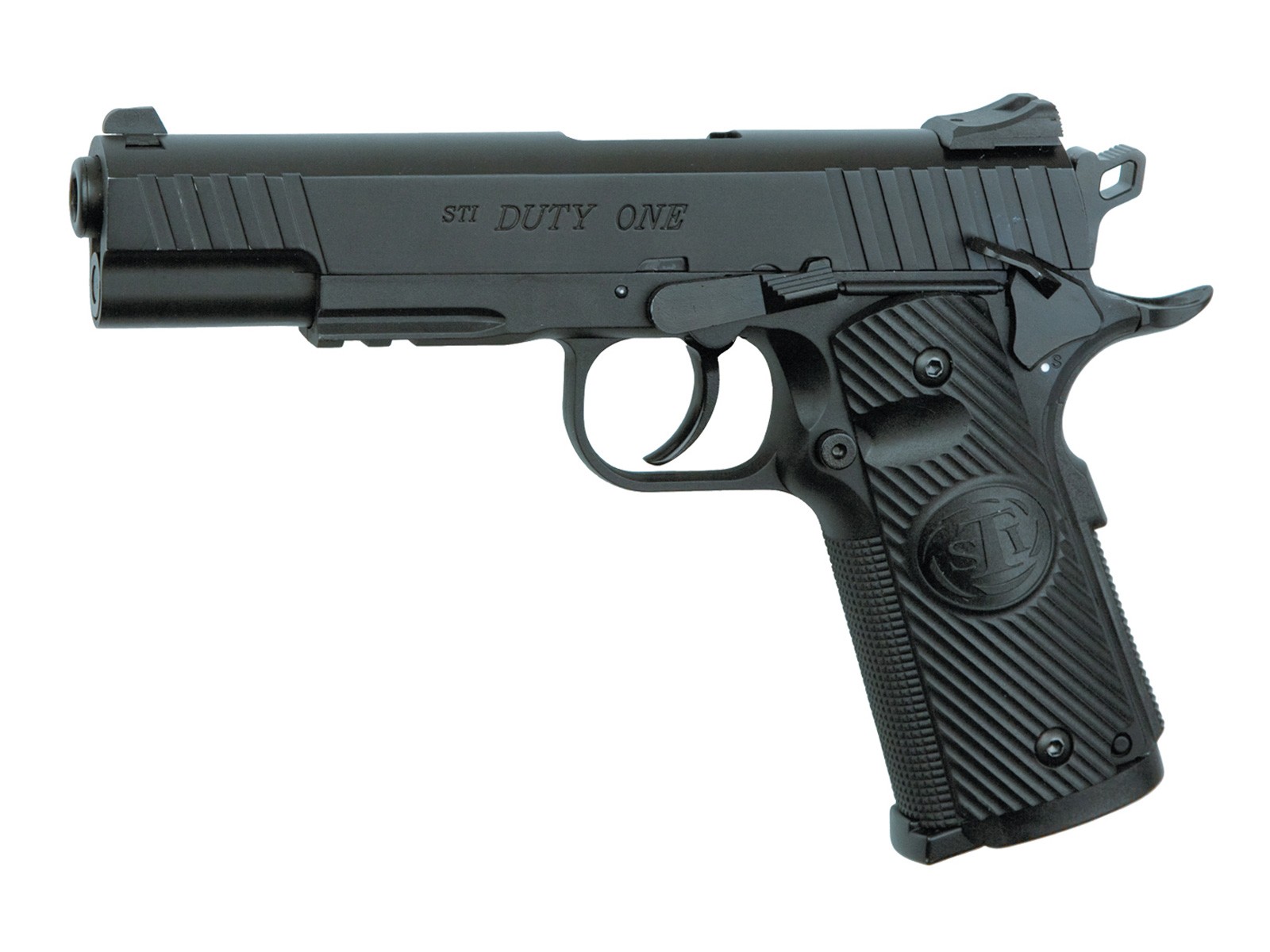 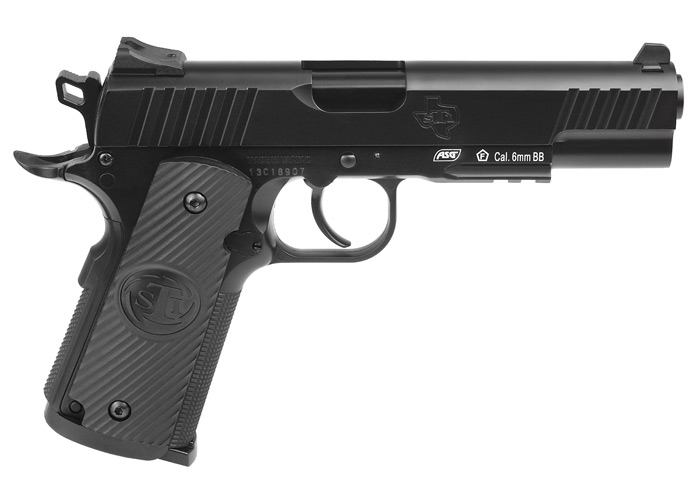 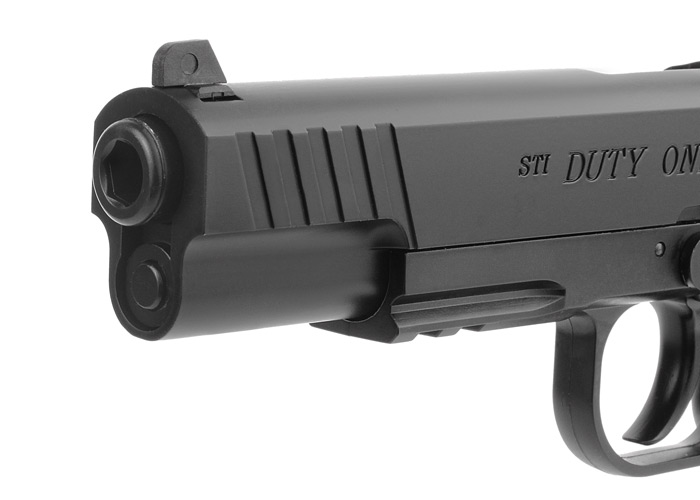 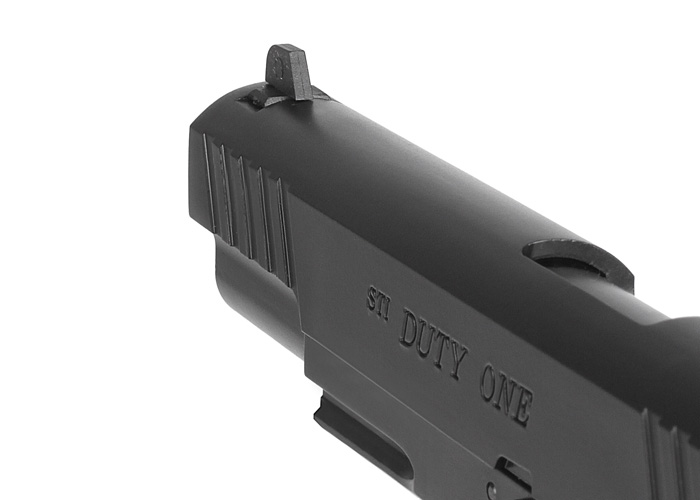 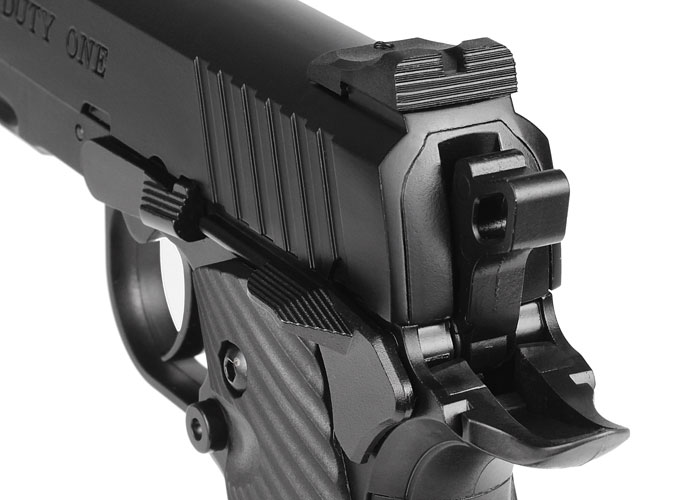 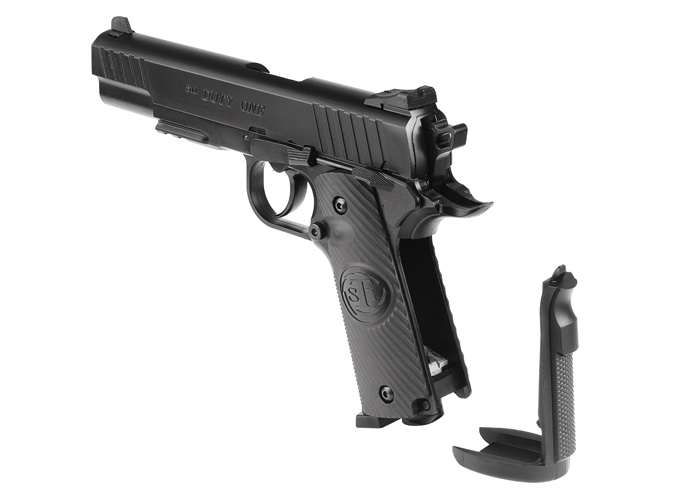 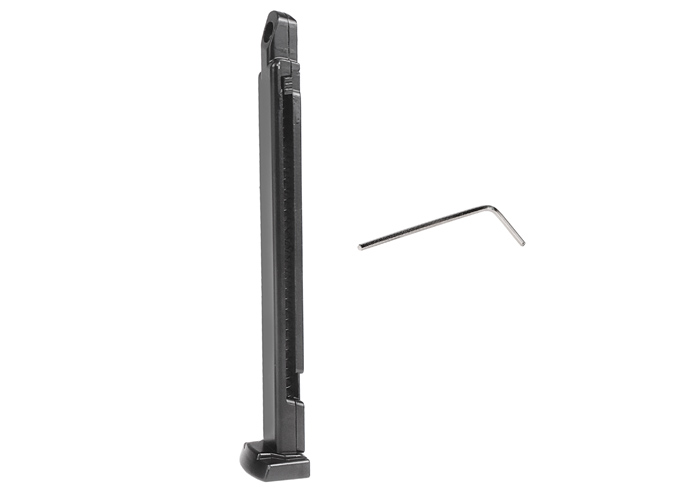 See other products by ASG

The STI Duty One pistol is about as realistic as you can get when it comes to 1911 air guns. The slide moves just as it would in a firearm. The air pistol is even better than the firearm...because you get 20 shots from a mag!

If you like the 1911 frame and can't get to the range to practice with your firearm, this gun will go a long way toward helping you maintain proficiency. You'll also save a lot of money by shooting steel BBs instead of live ammo.


See other products by ASG

My only complaint is the very long trigger pull. But like another customer said its very easy to get used to and the break is very crisp.Maybe a metal CO2 latch not plastic. My CZ has a metal one and almost look the same.. I just think it would add a little weight and make the balance better especially if you have the suppressor or a laser on it. Its a little forward heavy with lasers and suppressor mounted. I think if it were made of metal it would balance this great pistol

I personally can only share my experience and its been fantastic. I have had no double feeds even with a full. magazine. I love the slide staying open to tell me its empty that has never malfunctioned.I'm very very happy about this purchase. Great bargain. I left the thread protector off so the bore resembles a 45.ACP bore. I love the tactical look with laser and suppressor

This may be the only airgun I have out of more than a dozen that I would not change anything about.

Using Crosman BB's our chronograph shows 354 fps average for the first 6 shots. It is the most accurate BB airgun I have and it shoots a lot of BB's per CO2, as much as 50 if we shoot methodically and not too fast. The trigger has some take-up in single action but once you know that you can get used to it quickly. I bought two of these. One began to leak air as soon as you put the cartridge in, after about 6 months of ownership. Frankly, I have not tried to fix it or get it repaired. The other is 4-years old and still works perfectly. It holds CO2 for weeks if you put a fresh one in and don't shoot it.

Thank you for your comment!
I've always have been told not to leave any Airgun charged with CO2 for a prolonged time.. Only a gas piston can stay chartered longer or at all. Thsts what probably caused your leak? I always store all my pellet bb or real firearms completely uncharged. Nothing no co2 only a clean pistol ready to get a new powerlette .
Add comment to this review
July 1, 2016
By Airgun Papa

This is one good looking pistol. Even the polymer frame, grips and sights are so well made that you can not tell by looking that they are plastic. The one I have shoots to point of aim. The rear sight is adjustable for windage and elevation is right on at 10 yards. This one also shoots very consistent groups of about 1-1/2" overall for a magazine load of 20 Daisy Avanti steel BB's. I know its accuracy is actually better than that, but that is what I am able to do from the free standing position. Loading the magazine is simple. The slide has a catch latch and when depressed you can load the BB's. You must block the other side of the BB port with a finger and hold the magazine almost upright so the BB's will drop into the slot that holds them. A properly designed speed-loader will make it less tedious, but I found loading by hand to be convenient enough. My rating is for 4 stars overall, but the indicator above does not seem to allow anything other than 5 stars.

The trigger is somewhat of a two-stage pull. First there is a light but long take up with a definite hard stop. It is here my complaint begins. The pull needed to break the trigger must be around 10 to 12 lbs. This is ridiculous. The one saving aspect of it is that it is a crisp predictable break once your muscle memory has become accustomed to it. It is not mushy or have any discernible movement until it breaks cleanly. If they could halve that pull force, this thing would get 5 stars. Each time you pull the trigger through its first stage, a BB is released from the magazine. Without actually firing the pistol but only pulling the trigger through its first stage and releasing it, you can empty the magazine. This also means that if you pull the trigger through the first stage, even if you hold it there and point the muzzle down, the BB will roll out of the barrel. There were some occasions that as I counted my shots, the slide locked back before I got to 20. I noted some double BB's.

The velocity rating 383 fps of this pistol is honest and spot on as you shoot once every 10 seconds or so. Slow fire, pausing a minute between shots, it delivers about 400 fps. The blow-back action is robust and strong for a good shooting impulse. Reliability is great with no jams or misfires if you realize the aspect of its operation that if without actually firing the pistol but only pulling the trigger through its first stage and releasing it, you can empty the magazine. If the muzzle is not pointed downward and the BB does not roll out of the barrel you will have two or more BB's exiting the muzzle together. Once I realized this and made sure to complete the firing cycle I did not get any more double-feeds or misfires as long as I kept the muzzle level. This is an undesirable trait of the pistol design, but in practice it did not present a problem with my particular use of the pistol in target shooting. If you shoot in a manner that results in pointing the barrel down, beware.