I’m keeping the HW97 report close to the B3-1 test, so you can make comparisons. Thus far, we’ve noticed that the HW is by far the better finished air rifle. Several of you have now seen for the first time what a gun with a sliding compression chamber looks like. Today, we’ll test velocity.

Mac also tells us that he tested velocity with all the .177 pellets he had on hand. So, this test will be a little broader than usual.

JSB Exact 10.2 grain
The JSB Exact heavy pellet might me a good choice for this rifle. A little heavy for this power, it has the reputation of often being the most accurate pellet for a given airgun. It averaged 727 f.p.s. with just a 10 f.p.s. spread, from 720 to 730 f.p.s. The average muzzle energy works out to 11.97 foot-pounds.

Crosman Premier lite
The Crosman premier 7.9-grain pellet fit tight in the breech; and, in a rifle like the 97, that’s important because you don’t have great access to the breech because of the sliding compression chamber. They averaged 842 f.p.s., with a 21 f.p.s spread from 831 to 852 f.p.s.

Crosman Premier heavy
The .177 caliber Crosman Premier is the only one in which there are two different weights of pellets to choose from. The 7.9-grain “lite” Premier is best suited to spring-piston guns, while the Crosman Premier 10.5-grain pellet — the “heavy” — is better for PCPs and very powerful CO2 guns. In the 97, they were a very tight fit. Too tight, in fact. Mac actually had to use a flat stick to load them completely. They averaged 682 f.p.s., with a 28 f.p.s. total spread. The low was 671 and the high was 699 f.p.s.

Mac reiterates that the HW97 is very easy to cock and has a smooth shooting cycle. It’s smoothest with medium-weight pellets. He hasn’t come out and said so yet, but I think he likes the 97 as much as his TX 200, which is high praise for any air rifle. Accuracy testing is next. 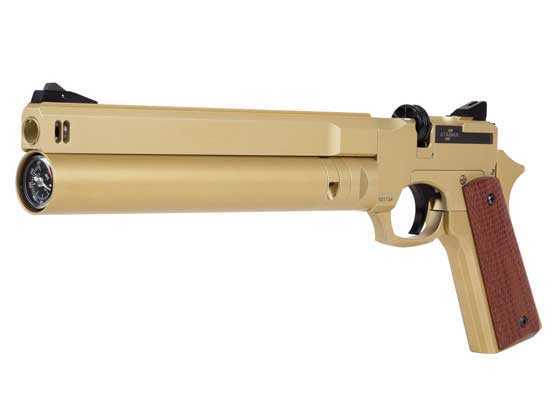