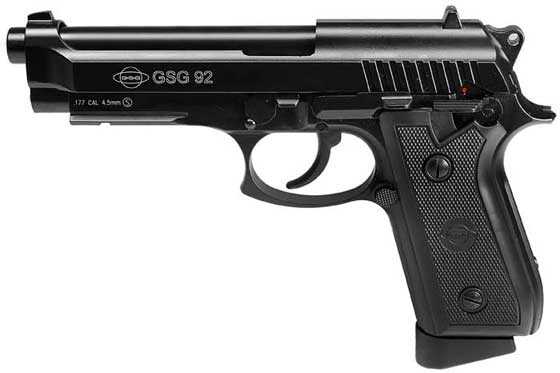 The GSG 92 is a very realistic action BB pistol from an airsoft manufacturer.

Today, I’ll test the accuracy of this GSG 92 CO2 BB pistol, and believe me, there has been more interest in this gun in any BB gun I’ve seen in a long time. Not all of the interest is focused on this gun, but I’ll address that later in the report.

As you may recall from the velocity test, this pistol gets about 40 usable shots per 12-gram CO2 cartridge. I kept that in mind as the test progressed, and I never let the gun get too low on power. I also waited for at least 10 seconds between each shot to allow the gun to recover from the cooling effect of the gas. The GSG 92 seems very sensitive to a power loss if you shoot the gun too fast.

The first shots were from only 10 feet to establish where the sights were. Since the sights are fixed and even molded into the slide, there’s no possibility for sight adjustment, so it’s important to know where the gun shoots.

I found the pistol groups lower than the aim point and just slightly to the left. However, with these sights, a 6 o’clock hold on the bull is the most accurate way of sighting, so I simply aimed at a bull above where I expected the shots to land. That worked very well for my shooting, which was done at 15 feet.

I tried to hold the pistol in one hand, but I’m not strong enough to do the gun justice that way, so I sat on the floor and used a two-handed hold with my arms rested on the back of a small chair. I know these groups you are about to see are the very best I can do with this pistol.

I installed a fresh CO2 cartridge and loaded the magazine with Daisy Premium Grade zinc-plated BBs. I know from many past tests that these are among the most accurate BBs in all BB pistols, so I went right to the best. That way, I could concentrate on the other things and not worry about ammunition.

Once the gun was sighted-in at 15 feet, I knew it would shoot about 2 inches low and .25 inches to the left. The shooting could now begin. The first target was shot with a 10-second pause between each shot, to allow time for the gun to recover its temperature. At 15 feet, though, the difference of 30 or even 50 f.p.s. doesn’t really have much of an impact.

The first group seemed to be a good one, and it doesn’t look too bad after all is said and done. But I felt I could do better, so I shot a second group. 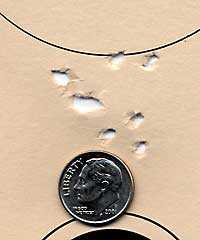 The first target caught this satisfying 10-shot group that measures 1.173 inches between the centers of the two shots farthest apart.

After the first group, I settled down and started focusing on the front sight, as you’re supposed to. I noticed that the next group was better, but still about the same amount below the point of aim. This group measures 0.914 inches between centers. 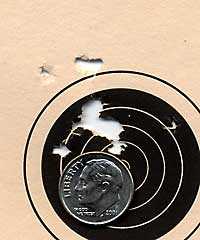 The second target was shot with more focus on the front sight. It measures 0.914 inches between centers for 10 shots.

I checked my past tests of BB pistols, and only the Umarex Makarov beat this one. I think I know why. This GSG 92 has realistic blowback that really bounces the pistol when it fires. I think the movement of the slide might make the difference between this one and the Mak.

The bottom line
For those who were thinking about getting a GSG 92, I would say go ahead. My tests demonstrated a very realistic and accurate performance, and the velocity exceeded factory claims. The one drawback is the low shot count, but for that price you’re getting one very realistic recoiling airgun.

It doesn’t end here
Here’s the rest of the story. While commenting on this gun, a couple readers got into a discussion about the SIG Sauer P226 X5 pistol. The claims for accuracy that were made seemed astounding to me, and since this was the first time in a long time that anyone has championed a BB pistol, I ordered one to test for you. The story continues. 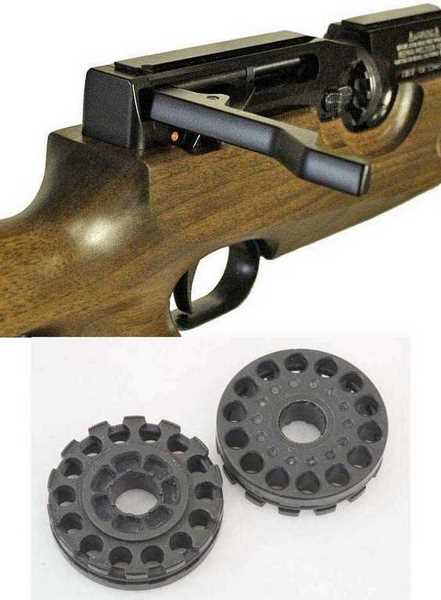