Today, we’ll begin a look at a variant of the HW 55 that was not produced in great numbers. It was supposed to be the high-water mark of the HW 55, and it came into being just after the end of the era when recoilling spring-piston target rifles had dominated the world stage. Shooters were moving en mass to the newer recoilless designs like the Diana 60-series, the FWB sidelevers and even the single-stroke Walther LGR.

An HW 55 won the gold medal at the European Championship in 1969. When the Custom Match hit the market in the 1970s, it came just after the summit of success. Little did they know at that time that there would be no more major championships for recoiling air rifles of any make. It was similar to the last gasp of the Offenhauser front-engine Indy cars when Ford got into Indy racing in 1963.

Like the proverbial tale of the last buggy-whip maker that made the finest buggy whips ever created, the HW 55 CM was the finest spring-piston 10-meter target air rifle Weihrauch ever produced. In this report, I hope to show you a few of the innovations they built into the gun to make it all that it was.

What about the Tyrolean?
Before we continue, you might be wondering what ever became of the HW 55 Tyrolean model and why I don’t refer to it as the finest target rifle Weihrauch ever made. The Tyrolean is, without question, the most beautiful air rifle ever made by Weihrauch, and it’s so perfect for offhand shooting that a different style would scarcely be needed, but a change in the rules outlawed the Tyrolean stock for international competition. Not only Weihrauch, but also Feinwerkbau, Walther and perhaps others already had Tyrolean models in production when the rules changed. Weihrauch continued making the model because of demand from private shooters everywhere. But its days of competitive shooting were over. I reported on the Tyrolean extensively back in 2008, and you can read that report here.

Today’s report is about the gun that was supposed to restore the HW name to competition — the Custom Match. Collector Mike Driskill has written that the CM was first offered in 1974. My own information on the subject is very sketchy, but the earliest date I can prove that it was available was in 1979. I trust Mike to have the data to back up his date, so let’s accept that as the starting point for this model. As far as the end date, it’s anyone’s guess. The HW 55 line simply petered out in the 1990s, mostly because worldwide sales had dropped off so much.

This much I do know — the CM model wasn’t made in great numbers. It was the most expensive of all the 55-series guns when it was being sold, selling for about $50 more than the Tyrolean, which was already $110 higher than the beech-stocked SM. Air Rifle Headquarters (the original one) sold the Tyrolean for $389.50 and the CM for $438.50 in 1979. At that price, the model was quite exclusive, though the Anschutz and Walther target models were hundreds of dollars more. But this was an outdated recoiling spring-piston rifle and the others were all the more desirable recoilless models.

General description
The HW 55 CM appears to be a large air rifle of approximately the same size as the FWB 300S, but that appearance is deceiving. Inside the deep forearm of the stock is a large hollow chamber for lead weights, and that void lowers the weight of the rifle to one ounce under nine pounds. That’s considerably lighter than the similarly sized FWB 300S that weighs 10 lbs., 12 oz. For shooters of average strength, the CM is a wonderful offhand shooter that happens to have a nice target stock.

An optional barrel weight in the form of a steel jacket was also available to add even more weight to the rifle. So, although it’s basically light, the CM can quickly gain several pounds when called upon.

A large cavity in the forearm is for adding lead weights.

The HW 55 CM (bottom) looks as large as the FWB 300S. It’s almost two pounds lighter, though, due to a hollow forearm.

The stock is made of straight-grained walnut, and the well-shaped almost-vertical pistol grip is deeply stippled for a good handhold. As far as I know, the CM does not have the same reputation for breaking at the pistol grip as the FWB 150/300 and the Anschutz 250, which are all very prone to breakage. There’s an accessory rail inlet into the bottom of the forearm, to the delight of serious target shooters.

The HW 55 CM is a breakbarrel like all the 55-series guns. And, all of them except the extremely rare SF model have a positive barrel lock located on the left side of the action at the breech. The barrel will not open until this latch is rotated forward, but when the barrel is closed there’s enough residual force in the tiny spring-loaded detent to hold the barrel shut without latching it. Not that you would want to do that, of course. 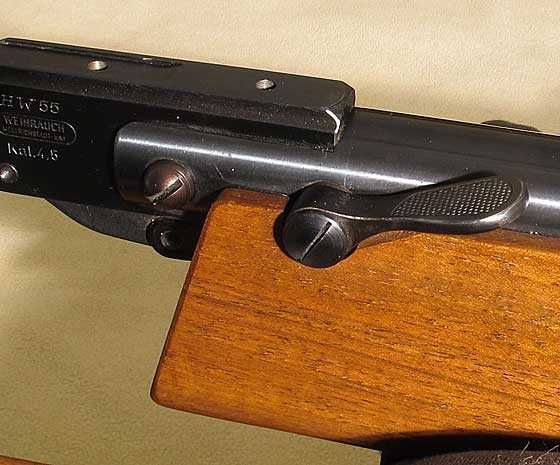 When the barrel locking lever is back like this, the barrel is positively locked closed.

Rotate the barrel locking lever forward to unlock the breech. This is how far the barrel will open before encountering spring tension.

Trigger
The trigger deserves special mention. Not only is it a Rekord trigger, but it’s a target version of that famous trigger. Several years ago, I asked Hans Weihrauch, Jr. why other Rekords were not as sensitive as this one. He told me they put a special light trigger return spring in this model, plus you can see in the photo that the pull adjustment screw that’s a plain aluminum screw on other Rekords is actually a thumbscrew on this rifle. Inside the thumbscrew, there’s a locking screw that must be loosened before the trigger can be adjusted. After that, you adjust the pull with the thumbscrew; and when you get it where you like it, tighten the locking screw to lock it in place. 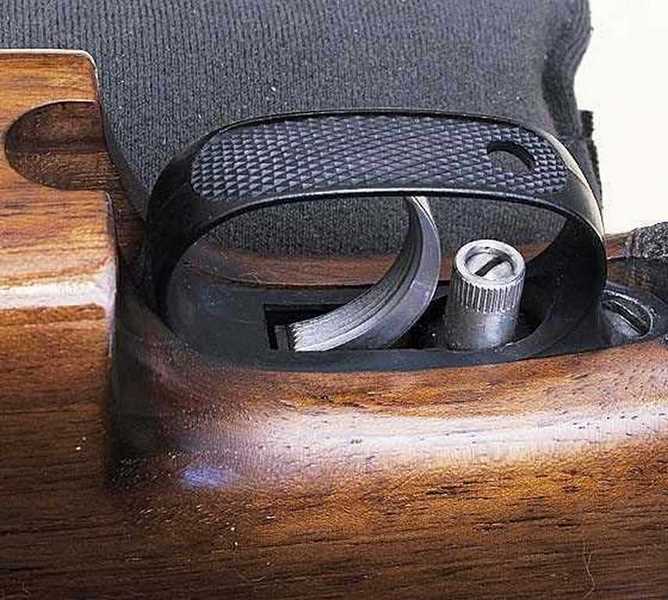 The trigger-pull adjustment is a thumbscrew located behind the trigger blade. The locking screw is visible inside. This adjustment is found on the special target version of the Rekord trigger. 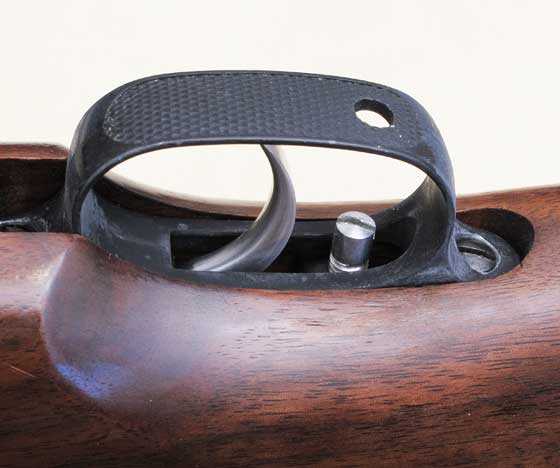 All other sporting Rekord triggers have just an adjustment screw like this one on the Beeman R1. They cannot be adjusted as light as the target trigger and still be safe.

I don’t have a trigger-pull gauge light enough to measure this trigger, but I would estimate that it releases with around 4 oz. of pressure. While that is considerably heavier than the triggers on my FWB 150 and 300S, it’s in line with the trigger on my Walther LGV Olympia — another recoiling spring-piston target rifle from approximately the same timeframe. As an offhand trigger, it’s fine because you don’t want something so light that you set it off before you’re ready. It also stops at the point of release, and that could be because of the trigger blade hitting the adjustment thumbscrew; but my HW 55 SF, which has the identical target trigger, has greater clearance between the trigger blade and the adjustment thumbscrew and stops before contacting the screw. There doesn’t seem to be a way to adjust this overtravel; or if there is, I haven’t found it yet.

Sights
All HW 55 rifles came with target aperture rear sights and globe front sights that had a set of inserts. My gun came to me with one front aperture insert. The rear peep is very small, and I might exchange it with the one I used on my FWB 150 for the accuracy test. Weihrauch peep sights changed many times over the approximately 40 years they were in production, and the one on my rifle appears to be one of the last versions made. 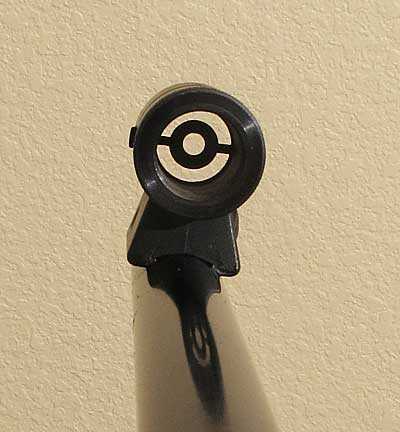 The front sight is a standard Weihrauch globe with replaceable inserts. 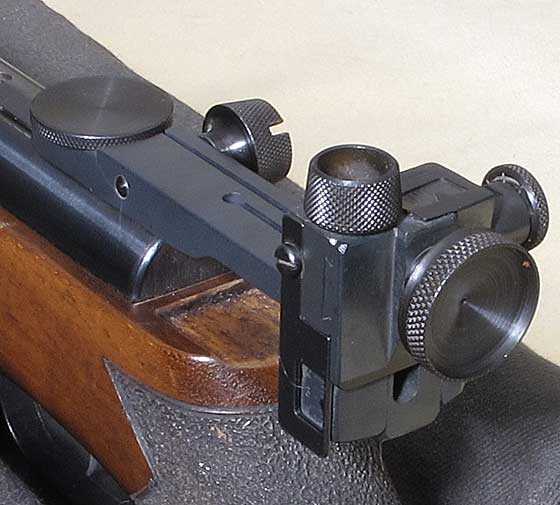 The rear sight on the Custom Match is one of the later HW 55 aperture sight designs.

Firing behavior
To be perfectly honest, the firing behavior of my CM is harsh and not at all in keeping with the rest of the rifle. I will test the rifle for velocity in the next report, but I think I’ll also lubricate the mainspring or perhaps replace it if necessary to smooth out the firing cycle.

Any HW 55 is a desirable air rifle, but the Custom Match is special even within the category of HW 55s. I hope to show you as much of this rifle as you wish to see; and even if you never see one in person, you’ll know they’re out there and what they look like. 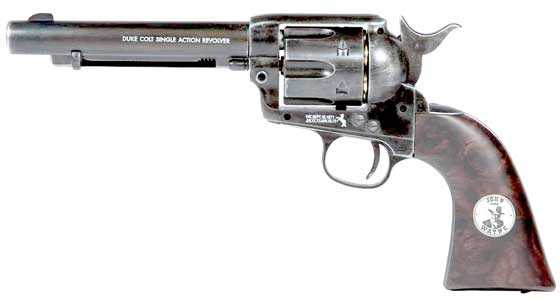