This is going to get a little confusing, because I’m changing things in midstream. Part 1 of this report was titled Testing the Slavia 631 with non-lead pellets, because that was what I thought I was going to do. Instead, though, my Slavia 631 needed attention, and, while trying to fix it, I broke it. I tested the non-lead pellets with my FWB 150 and found them to be so accurate that a whole other test was born. I haven’t done that test yet, but today I’m getting back to the Slavia, which has recently been repaired and returned to service. There’s enough of a story in just fixing the gun, that I thought I would make a report out of it, plus I want to use the Slavia as a testbed for other things in the future and I needed to establish it as a working airgun again.

Confused? I know I am.

What happened
When I used the 631 to test the velocities of the various pellets that would be used in the test, I noticed the rifle was very hard to cock. I believe it took 35 lbs. to cock the gun, which is way out of profile for that rifle. I thought I’d do a quick lube job and see if things would return to normal. Well, they did, but not entirely.

After lubrication, the cocking effort dropped to 21 lbs., which is about where I expected it to be; but while assembling the gun, I had difficulty getting the trigger to work right. Then, during the final disassembly, I lost the small coiled spring that fits between the trigger blade and the sear. The sear is held on a pin inside the end cap, and this spring that fits into a hole in the end of the part helps hold it in place for the trigger to act on it at the right time.

The spring I lost is about half the diameter of a ballpoint pen spring, so it’s really tiny. Nothing in my small collection of spare parts was close. I inquired of several places, but nobody had a replacement. Then, while reading a blog about the disassembly of the 631 on Another Airgun Blog, I discovered there is a second spring that acts as the trigger return spring that I had never even seen. So I thought I had lost that one as well. I didn’t, but the way the blog was written, there was no clue as to where this spring fit or where I should look for it.

So, I switched test guns over to the FWB 150, which proved very serendipitous, because I discovered that non-lead pellets can indeed be accurate under just the right circumstances. But that left me with this broken classic 631 on my hands.

I remembered that I’d purchased the rifle from Compasseco, so I contacted Eric Munson, the son of the former owner, to see if he still had any Slavia parts. He didn’t, because Compasseco had gotten rid of them years ago when they stopped carrying the Slavia line. Then, I asked the right question. Did he have any old broken 630 or 631 rifles laying around? He did, because airgun dealers frequently have piles of guns they never fixed for one reason or another.

To cut to the chase, Eric sent me an old broken 631 that had been cocked for many years, and I was glad to get it. It had the tiny spring I needed, but it had something even more important. In that rifle, I spotted the trigger return spring that was not completely described in the blog I’d read. It’s a permanent part of the plastic triggerguard and stays inside the stock when the action is removed. Sure enough, when I looked inside my good rifle’s stock, there was the spring I thought I’d lost. 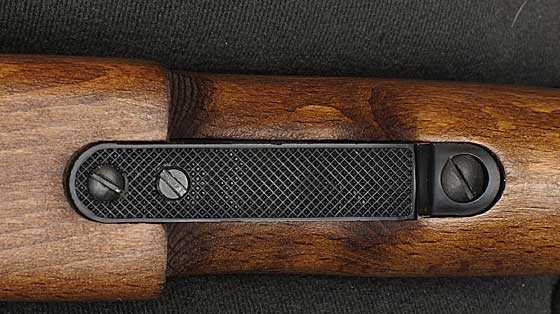 Trigger adjustment screw (second from left) is key to the assembly of the rifle. 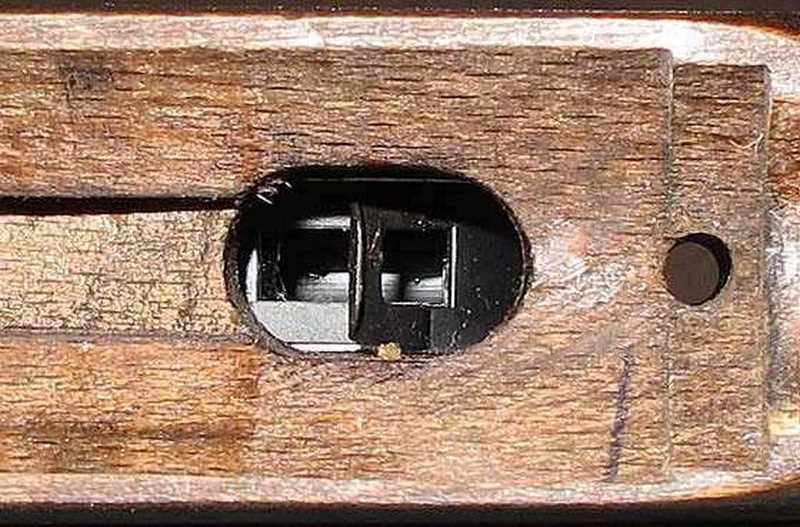 Looking down through the trigger slot in the stock, you can see the trigger return spring that’s captive in the triggerguard. What appears as a square hole in this photo is actually a slot the trigger blade must fit through. There are two flat steel parts that together look like one in this view. 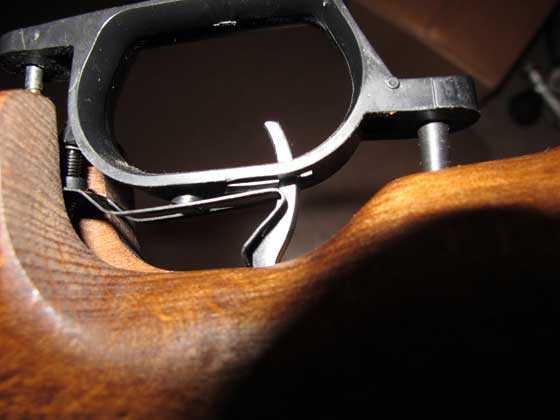 This view shows the trigger return spring better, and you can see how the trigger blade passes through the slot in the spring. Note the screw threads on the left that are part of the trigger-pull adjustment system. These are the key parts that must be assembled correctly or the rifle will not function.

Now, I’ll describe how a Slavia 630/631 is disassembled so the owners who have never done it will be able to follow my description and not make the same mistakes I did. This will not be a astep-by-step set of instructions because, in my opinion, the Slavia 630/631 is not a rifle for the beginner to work on. If you can understand what I’m showing you and telling you, you’ll be able to work on this rifle. If not, please don’t try to take it apart!

Disassembly
The action comes out of the stock by removing three long bolts — two in the underside of the forearm and the rear triggerguard screw. After the action is out of the stock, look down in the stock at the underside of the triggerguard to see the trigger return spring that Slavia also uses as a trigger adjustment. This is the spring that foiled me, and it will foil many of you unless you know where it is. The two photos I’ve already shown will reveal how these parts fit together.

You don’t have to do anything with this spring except to know that it’s there and how it functions. When the gun goes back together, the placement of this spring will determine whether your trigger works or not, and it’s very easy to get it in the wrong place. 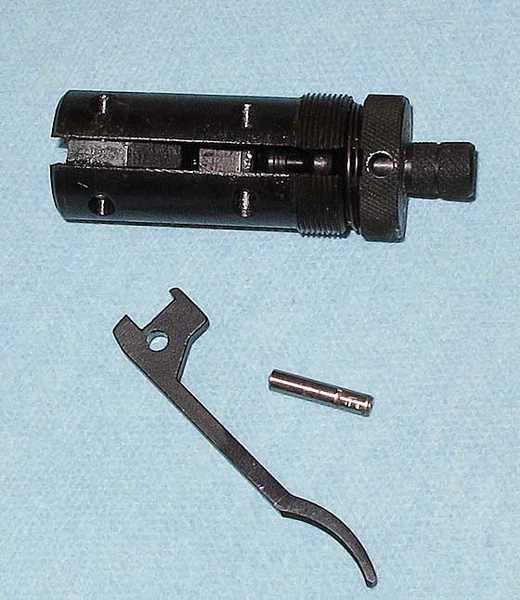 Once the trigger blade and sear spring are out of the action, thread one of the long stock bolts into the hole at the bottom of the end cap and use it as a handle to turn the threaded end cap out of the spring tube. The barreled action should be installed in a mainspring compressor as this is done, and you’ll need to use a small socket to fit over the safety knob to put pressure on the end cap as you go. 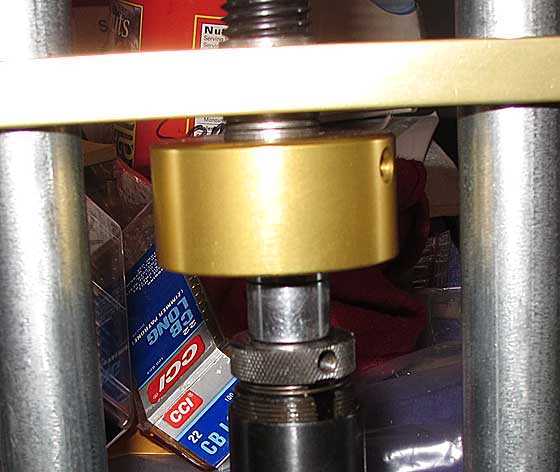 The end cap is slowly being unscrewed from the spring tube. The threaded hole in the knurled section of the cap is where you thread in one of the stock bolts to start the end cap turning. After it gets going, you don’t need that bolt any longer.

The rifle I received for spare parts had been cocked for years, so the mainspring was under full tension all that time. I was extra careful when removing the end cap, but the spring was so collapsed from being compressed for so long that the end cap only came out of the gun by about an inch.

The cocking link on this rifle is a two-piece articulated one that doesn’t use a cocking shoe. Once the action is out of the stock, the cocking link will fall free from the spring tube as soon as there’s clearance. Since this rifle was cocked, it fell out immediately.

The tune
You may recall that I said my rifle was somewhat buzzy as well as being dry. Once it was apart, I could see it had never been lubricated from the factory. That was what was causing the cocking effort to be as hard as it was. I lubricated the mainspring with a product that’s no longer obtainable — Beeman’s Spring Gel. It was less aggressive than their Mainspring Damping Compound, which will subtract significant velocity from any spring gun to which it is applied. Spring Gel never worked well for me in the past, but I thought I’d give it another try, so I slathered it on the mainspring and on the outside of the spring guide. And that was the full extent of my lube job. I could see that the piston seal is a synthetic one, but I didn’t rub anything on it. It seemed oily enough from an earlier application of silicone chamber oil, and I thought I’d leave it that way.

The piston is a solid steel part that’s well-made. The piston seal is synthetic, and on this spare parts rifle the edge of the seal is chipped.

Assembly
Then the rifle was assembled in reverse of disassembly, until we got to the trigger. I installed the small coiled spring and eased the trigger back into its proper place by inserting the other end of the coiled spring into the front of the sear. Then I aligned the holes and drove in the pin that holds the trigger in place.

Next, I installed the barreled action into the stock, taking extra care to “thread” the trigger blade through the trigger return spring that was still installed in the stock. This time, I knew about the spring; and even then I got it wrong a couple times before getting the spring into the right relationship with the return spring. Once that was done, the rifle cocked and functioned perfectly.

Tip
The trigger adjustment screw should not be tuned with the rifle disassembled; because if it’s turned too far out of adjustment, the rifle will not cock. That’s a safety measure in the design of the gun, but it also makes it difficult to assemble the rifle if you don’t know if the problem is where the adjustment screw is set or if you’re missing the correct positioning relationship of the trigger blade to the return spring.

Performance
Since I’d already chronographed this rifle before lubricating it, I had a good baseline against which to compare the now-completed rifle. I knew that the cocking effort had dropped from 35 lbs. to 21 lbs., which is a good indicator that the lube was doing its job, but what about performance out the muzzle?

Before the lube, Crosman Premier 7.9-grain pellets were averaging 589 f.p.s., with a spread from 586 to 593 f.p.s. After the lube, they averaged about the same 589 f.p.s., but the variation was much broader, going from a low of 577 f.p.s to a high of 614 f.p.s. That’s what you get following a lube tune, and it will soon settle back to where it was before. I don’t think there’s been any change in velocity at all.

The buzzy nature of the gun seems not to have changed at all, so I’m still having no luck with the now-obsolete Beeman Spring Gel. However, it did accomplish one thing — the reduction of excessive friction during cocking. That was the goal of the tune to begin with.

The results
Now, I have a rifle that I can rely on, and I’ve scheduled at least one test for this rifle in the near future, so it’s good to have it back. I wrote this report because nowhere have I been able to read about the trigger return spring, and I wanted to document it for all who decide to tune this rifle in the future.