As I mentioned in yesterday’s blog about the Roanoke Airgun Expo, this year there was more time to sit and talk, and we all did a lot of it! I chatted with Jay in VA about a number of things that will become blogs in the future, but something that was said as an aside turned out to be the most important thing of all. Someone asked a question about something — I can’t remember what — but it prompted me to answer that such-and-such a book was the best place to get the answer. It might even have been Jay who mentioned it, and the topic might have been firearms-related and not airgun, but it started us talking about an airgunners library. Jay suggested that I write a paragraph of description about the books I think every serious airgunner needs to have.

I’ve done this before, I know, but this time I’ll be doing it from a different and more personal angle. I have recently been helped by some old books that almost nobody even knows about, thanks mostly to recommendations from Kevin and Robert from Arcade. So, let’s get right to it.

Yours Truly by Harvey Donaldson
Yours Truly by Harvey Donaldson is a compendium of the written works of Harvey Donaldson, the man best-known as the inventor of the .219 Donaldson Wasp cartridge. In the book, Donaldson is revealed not as a wildcatter of the 1920s, but as a thoughtful benchrest and varmint hunter who was always searching for accuracy. He knew all the greats such as Pope, Neidner and Whelen; and he even schooled a few of them — notably Whelen. He drove a Corvette and was honored in his ’80s by GM as the oldest sports car enthusiast in the world, so the man was in touch with reality, too. From his book, I learned a loading technique that promises to advance my accuracy with the old Ballard rifle by an order of magnitude. Search Amazon for used copies of this book. 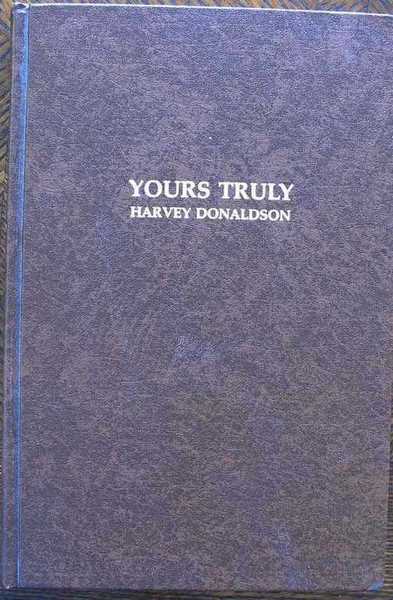 This is the book that started my current quest for “new” gun books. It’s a marvelous read.

The Muzzle-Loading Cap Lock Rifle
Ned Roberts, the inventor of the .257 Roberts cartridge, is the author of The Muzzle-Loading Cap Lock Rifle. Roberts wrote the book in 1940; yet, when I tried his ideas in a Schmidt-Rubin target rifle a couple weeks ago, I found them fresh and applicable. For the first time in my life, I shot a 100-yard group smaller than one inch with cast lead bullets. True, it was only a 5-shot group, but I’m just getting started. Oddly enough, this book had very little to say about cartridge arms, yet the info is quite germane to accuracy. It was the impetus for the overbore blog I wrote last week, and it helped me formulate several ideas about accuracy. If you’re serious about shooting and hitting what you aim at, read this book! Find it on Amazon or at one of the used book dealers you get with a Google search. 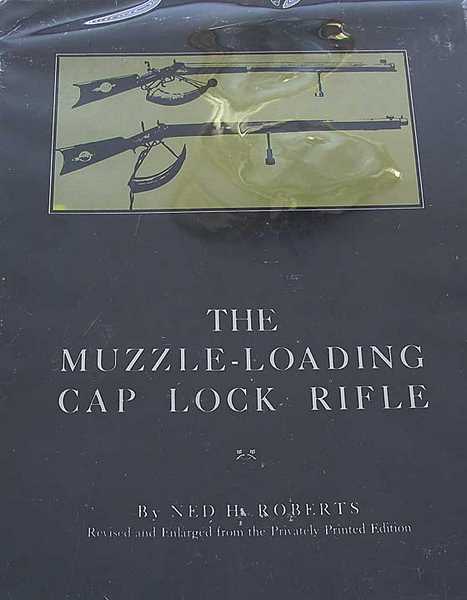 This old book is a prize for shooters who want to put them all in the same hole!

But they’re not about airguns!
I know that many readers will look at the two books mentioned already and wonder what they have to do with airguns. Both are about firearms with not a mention of an airgun. Yet, the principles of accuracy still apply. I find that when something works in one world, it probably carries over to the other. And let’s face it — a good universal airgun book doesn’t exist. I will recommend a couple books I find to be most helpful, but I have to admit that the airgun world is lacking in anything as universally applicable as can be found in the world of firearms.

Powder to Target/Trigger to Target
Here are two books of fundamentals that every serious airgunner needs to own. The first is The Bullet’s Flight from Powder to Target, written by Dr. Franklin W. Mann in 1909. It has tests that Mann conducted to try to identify the components of accuracy. Not much has changed in a century, has it? Mann spend considerable time (37 years) and money testing everything he could think of to try to identify why some guns shot more accurately than others. He called fliers the X factor. And 30 years later, Roberts called them “outliers.” But both men were interested in why some bullets did not go where the shooter intended. Mann even made a range protected from the wind, by stretching a canvas tunnel 18 inches in diameter down the 100 yards of his test range. The tunnel was curved to allow for bullet drop! Can you imagine the skill it took to construct such a thing — and the anal personality it took to actually build it? Mann would have been one of those guys who carries around a thick notebook full of targets and spreadsheets, and if you saw him coming you would turn around and walk away. You would do so because the first time you met him you had a pleasant five-hour conversation about the effects of precession induced by crosswinds coming from various angles. You said, “Hello” when the conversation started and “Goodbye” when it thankfully ended. He did the rest of the talking. 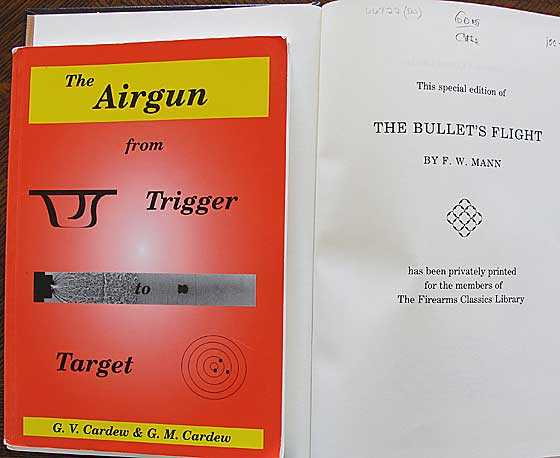 Both books are about the things we want to know but don’t have the time or resources to test ourselves. These are fundamental references that a shooter cannot afford to do without.

So — not a crowd-pleaser, but a milestone experimenter when it comes to accuracy. It reads like stereo instructions written by Shakespeare, so it’s not a page-turner; but I can say the same about a lot of other valuable references. Buy the book off Amazon or from the used book dealers and buy only a reprint, as an original costs about what an HW55 costs!

The Cardews were just as curious about airguns as Mann was about accuracy. They carried out numerous experiments to answer those questions that always come up whenever airgunners get together — only they actually tested their theories.

Want to know how dieseling differs from detonations? They cover it. How long does a spring gun barrel need to be for maximum velocity? They were the first to publish the results and today they are quoted by people who don’t even know they exist. Their book is a seminal work, and though it is sometimes hard to follow, I recommend it to everyone. This one will be hard to find, as it goes in and out of print. Just buy it if you ever see it.

It’s a Daisy
It’s a Daisy is a book about the birth and growth of Daisy — the most iconic American airgun company. The author is Cass S. Hough, the grandson of the founder of the company, and a character in his own right. Hough was the test pilot who inadvertently broke the sound barrier in 1943 in a dive over an airfield in England while trying to rectify the handling problems of the P38 Lightning fighter. He worked for Daisy both before and after the war, and was finally president of the company. He gives a deep insight into the workings of the company during its first 50 years.

The first printing of this book had skyrocketed to $100 on the used market a few years ago. Then, Daisy reprinted it. You can’t buy one directly from them, but it’s available here. 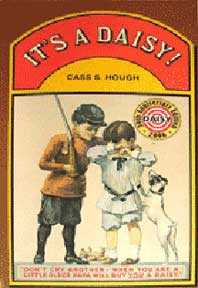 If you want to learn the history of BB guns in America, this is the place to start. 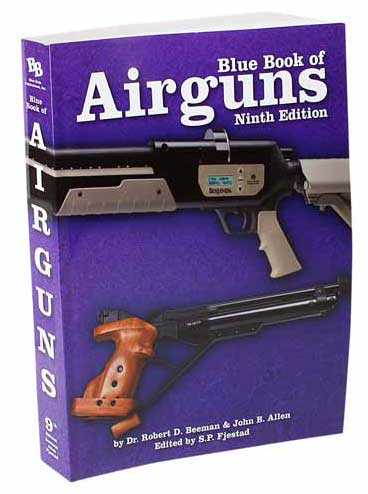 This is the best reference for what’s out there. It gets better with each new edition. This one is number nine.

Well, surprise, surprise! The Kelly Blue Book of automobile values works the same way. Thery may say that a 1998 Ford F-150 is worth X, but you might see one in great shape for half that if the owner lost his job and can’t keep up with the payments. Or you might see one listed for 2X if it was last owned by a famous personality (Remember John Voight’s Chrysler LeBaron on Seinfeld?). Just deal with it. The thing about the Blue Book is not the prices — it’s the other information on guns many of us have never seen or even knew existed. I have made a lot of money by owning and consulting a Blue Book.

Wrap up
So there you have it. My short list of airgunner must-haves. Even if you are not a reader, these books can make you a better-informed airgunner, and shooter in general.

One last thing
I wasn’t going to mention this, but there has been some talk among you readers, so I will post it here. My best buy at this show turned out not to be an airgun at all! While looking at the tables I saw and bought a slingshot that has both a red dot sight and a laser designator for Edith. She was really keen on getting one after seeing it online, so I bought it for her. It’s a cool device and I may find a way to work it into a posting sometime, but that wasn’t my best deal.

At the same table I spotted a 1918 trench knife that I assumed to be a replica. I assumed that because this is a rare variation of the more common 1917 model made by LF&C. I had seen the 1918 version on Pawn Stars, so I had some sense of what a real one would be worth, and the asking price was well within my budget, so I bought it.

A chance find at an airgun show! The 1918 trench knife is rare.

Long story short, this isn’t a replica. It’s the real deal from World War I. Most of these were used and abused, so mine, which I would rate as very good, is even rarer. I didn’t expect to find one of these at an airgun show, but because I knew what it was I bought it the moment I saw it. The fact that it turned out to be real is a plus, because I paid for what I thought was a very good replica.

The old salesman’s adage applies here. If you want to make the sales you have to make the calls. Or better yet — the time to buy them is when you see them.

32 thoughts on “Building an airgun library”