While I was at the courthouse awaiting jury selection the other day, I was reading a favorite gun book, Yours Truly Harvey Donaldson, edited by David R. Wolfe and published in 1980 by Wolfe Publishing Company, Prescott, Arizona. In the book, Wolfe assembles letters and articles written by Harvey Donaldson, one of America’s top shooters, and cartridge developers. He is best-known for his .219 Donaldson Wasp cartridge, but he actually worked on dozens of different centerfire cartridges over the 89 years of his fruitful life. And he was a schuetzen shooter on top of all of that. Schuetzen rifles are single-shot rifles with incredibly accurate barrels that shoot lead bullets at low velocities. They typically shoot at 100 and 200 yards, either offhand or rested on a bench. The best of them have been known to put 10 bullets into a group that measures under one-half inch at 200 yards, which is a challenge that’s difficult to equal with modern arms today. read more

I’ve written about firearms in this blog from time to time. Even though it’s about airguns, there are so many lessons we can learn from firearms that it’s a shame to turn our backs on them — as if by using explosive gas instead of compressed air they’re somehow different. Once the projectile gets out of the barrel, it acts the same regardless of what starts it on its way.

Many of you understand why I do this. Blog readers Kevin and BG_Farmer, for example, know that a precharged gun acts the same as a black powder arm, in that they both require a long barrel for optimum performance. The longer the barrel, the greater the velocity you can expect — all other things remaining equal. That was demonstrated clearly in the test of the Talon SS, when I switched from a 12-inch barrel to a 24-inch barrel. Velocity increased dramatically and the shot count remained the same — proving that a longer barrel gives greater performance in a PCP. read more

Before we begin today’s report, I want to reflect on a truth that helps explain why we’re sometimes dissatisfied with things when we get them. I was at the range last week testing some airguns, and I was using my Celestron 70C spotting scope, like I always do. This scope is good at 50 yards, but becomes marginal at 100 because it cannot resolve the smaller bullet holes. I don’t mean pellet holes, I mean .22-caliber bullet holes in the black bullseye at 100 yards.

A friend brought his Burris spotting scope to the range for me to compare, and the difference between the two was night and day. His scope was sharp enough to see small spiders walking on the target paper at 100 yards! read more

For the benefit of readers who have landed on this article first, this is the sixth test in a series of reports designed to test how velocity affects accuracy. I’m using a Whiscombe JW75 breakbarrel/underlever rifle with a .177-caliber barrel installed. That way the same powerplant is being used for each test. I’m controlling the power of the gun by the use of different air transfer port limiter screws that allow less and less air to past through.

The Whiscombe rifle uses dual opposed pistons that come together to compress the air when the gun is fired. The rifle has no recoil and just a minor impulse that can be felt — yet it’s one of the most powerful spring-piston air rifles ever made. My rifle can produce over 30 foot-pounds in .25 caliber. read more

Today we look at the groups made by the four pellets used in this test at 25 yards when the velocity is diminished. Part 4 covered the velocity for each pellet, so go there to see where each one is.

If you like nice linear results, prepare to be disappointed. Today’s target do show changes, but they may not be in the direction you expect. Let’s get right to it.

First up were the 7.1-grain Beeman Devastator pellets. These pellets have been a real surprise in this test, because they have proven to be accurate at supersonic velocity and they are not sensitive to bore conditioning. Shoot one and it tends to go to the same place every time. They also do not show any first-shot tendencies that so many other pellets do. This is a real plus for hunters, who are always shooting the first shot. I will have to return to this pellet sometime soon and test it in other guns, because it seems to be a real winner. read more

Today we lower the velocity of the Whiscombe and test each of the four pellets, in preparation for the next accuracy test.

One reason I selected the Whiscombe for this series of tests is the fact that I can control the power output over a wide range of velocities by installing various transfer port limiters. For those who are new to airgunning, every spring-piston airgun like the Whiscombe generates a brief blast of compressed air by means of a piston racing forward in a compression tube. In the Whiscombe’s case it is actually two pistons racing towards each other. At the exact end of their travel a small air tunnel called an air transfer port conducts the compressed air from the compression chamber to the base of the pellet, where it blows it out the bore. read more

Announcement: Jerry Strong is this week’s winner of Pyramyd Air’s Big Shot of the Week on their facebook page. He’ll receive a $50 Pyramyd Air gift card. 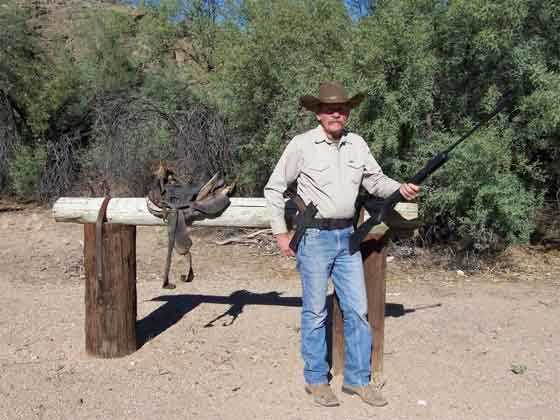 Jerry Strong, winner of the Big Shot of the Week, holds a Stoeger X50 and wears a Beeman P1 on his hip.

What a day we have before us! I relearned a valuable lesson in accuracy and got some very surprising results.

Increasing accuracy by an order of magnitude
Before I launch into today’s report, a comment I made a few days ago has raised some interest and I thought I would explain it now. I happened to mention that a new loading technique that I was trying on the Ballard .38-55 rifle had given me the promise of an accuracy increase of an order of magnitude. Instead of 10 shots going into one inch at 100 yards, it looks like this new technique will be capable of putting those same 10 shots into one-tenth of an inch at the same distance. Whether I ever accomplish such a feat is immaterial as long as the rifle demonstrates it can do it. read more