Today is velocity day for the IZH 60 Target Pro. Before we begin, there’s a surprise correction I need to make to Part 1. When I measured the length of pull, I didn’t mention that the adjustable stock can be lengthened an additional inch by relocating the anchor point of the adjustment screw.

Increased length of pull
Mac reads the blog sometimes, but he doesn’t comment very often but he loves the IZH 60/61 family of rifles. After reading Part 1, he called and reminded me of something I’d forgotten. If you pull the butt stock off its post, you’ll see a second spot for the screw anchor on the butt stock post. All you have to do is move the anchor from the first slot to the second, and you’ll add just over an inch to the length of pull on your rifle. I had reported a LOP range of 12 inches to 13.25 inches in Part 1. Now, I’ll revise that to a maximum of 14.5 inches. (Edith will amend the owner’s manual to show this info.) 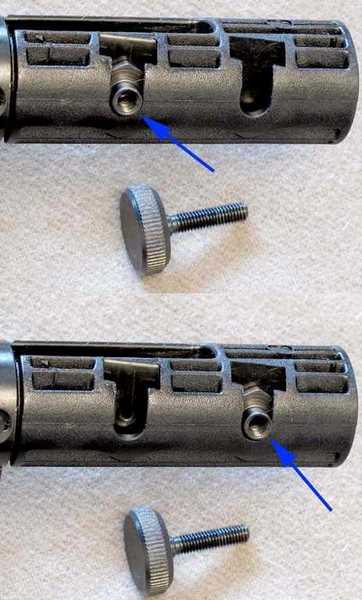 By moving the screw anchor from one slot to the other, the length of pull can be increased by more than an inch!

The importance of follow-through
We discussed the fact that this powerplant is not capable of producing a lot of velocity. There was a comment on Part 1 that low velocity makes you need to follow through all the more, but I want to address that. Low velocity is not why you must follow through when shooting a spring-piston airgun. Even a 1,300 f.p.s. springer requires follow-through because it has the same problem as the IZH 60. In a springer, the pellet does not begin moving until the piston has almost come to a complete stop. The gun is already vibrating and moving in recoil before the pellet starts its journey down the barrel. But if it takes an IZH 60 to drive that fact home, all the better, because the proper follow-through can do nothing but make you a better shot.

Velocity
As I explained in Part 1, Pyramyd Air sent this rifle to me for this test. They were very confident this rifle would shoot accurately, and they even sent a tin of what they feel are the best pellets. Guess what they are? H&N Baracuda pellets! The website says these are supposed to weigh 10.65 grains, but I weighed the ones sent by Pyramyd Air, and they weighed 10.4 grains. H&N Baracuda pellet weights have changed a lot over the past few years, and I would always recommend actually weighing them rather than accepting the description, because the weights seem to change a lot.

These pellets averaged 382 f.p.s. in the test rifle. The range of velocity went from 371 to 389 f.p.s. At the average velocity, they generate 3.37 foot-pounds of muzzle energy. They will be the first pellets I test for accuracy; but since they’re domed pellets, they cannot be used in a formal target match due to the difficulty of scoring the holes. I’ll also test some wadcutter pellets — both target and general sporting types.

The second pellet I tested was a target wadcutter — the H&N Match Pistol pellet. This 7.56-grain wadcutter is a good general target pellet that costs less than H&N’s Finale Match pellet line. As a pistol pellet, it weighs less than 8 grains, making it appropriate to the IZH 60 powerplant.

This pellet averaged 485 f.p.s. and ranged from 481 to 490 f.p.s. At the average velocity, they generated 3.95 foot-pounds at the muzzle. This is the velocity I expected from this rifle.

Next I tried the H&N Baracuda Green — the lead-free pellet that’s performed so well in a number of lower-powered airguns. This time, though, the performance wasn’t as good. The average velocity was 425 f.p.s., despite the fact that the pellet weighs just 6.48 grains. It must be the harder alloy that causes excessive friction with the rifling, because the range for this pellet was from a low of 367 f.p.s. to a high of 489! At the average velocity, the muzzle energy was 2.60 foot-pounds. Even at just 10 meters, a velocity variation this large will cause the group to grow, so I don’t think I’ll test this one for accuracy.

The last pellet I tested was the RWS R-10 Match Pistol pellet. At just 7 grains, this pellet was the lightest of the lead pellets used in this test. It averaged 525 f.p.s. with a range from 507 to 534 f.p.s. The low shot was an exception and loaded very hard. The next-slowest pellet went 516 f.p.s. At the average velocity, this pellet produced 4.29 foot-pounds of energy.

Overall the rifle performed better than I expected. There’s some buzzing in the firing cycle, but it’s not objectionable — probably because of the low power of the rifle. A “beer-can” tune would probably do wonders for it.

The trigger is light enough, if not very positive. It breaks at 1 lb., 7 oz. consistently. I did try adjusting it, but it was set as light as it would go when I received the rifle, so there was no improvement.

One final thought. I went through the box the rifle came in and found a target that proves this rifle can shoot a tight group at 10 meters. It’s shot on a Shoot-N-C target, so measurement is impossible because of the paint flaking off, but it does look like a quarter-inch group. However, it’s only 5 shots and the standard is 10, so that hat is still on the line!