Let’s begin testing the effects of oiling pellets. There are numerous ways to approach this issue, and I have to pick one at a time and limit the test to just that. But I think as long as I’m testing one aspect, I ought to test it thoroughly so someone can’t come back and second-guess me later in the report.

So, today I’ll test with one rifle, and the next time I’ll test with another. What I won’t do is test with each different brand of airgun, just to see what will happen. If a powerful gas spring rifle performs in a certain way, I’ll assume that all powerful gas spring rifles are going to do the same. If the difference between dry pellets and oiled pellets is close, I may do additional testing; but if there’s clear separation, I’ll accept that as the way it works.

What am I testing?
The question that started this experiment was, “How much faster will oiled pellets shoot than those that are not oiled?” One reader has asked me to also test this downrange because he wonders if a thin coat of oil changes the laminar flow of air around a pellet. I may get to that at some point, but for the present I’m just concerned with muzzle velocity because all pellets slow down after they exit the muzzle — oiled or not.

I suppose this needs to be tested in all three powerplant types, but today I’m testing it in a spring-piston powerplant. Today’s gun is a weak powerplant, so next time I’ll test it in a more powerful gun.

I’m using an HW55 SF target rifle to test three pellets. This rifle is a variation of the old HW50 rifle, so it shoots in the 600-650 f.p.s. region with lead pellets.

Since oiled pellets will leave a film in the bore, I tested all pellets dry first, and then tested the oiled pellets afterwards. Before the first test shot with oiled pellets, I fired two pellets to condition the bore. That turned out not to be enough, but I’ll come to that later.

Pellet shapes
I’ll test the three major pellet shapes in this test. They’re the wadcutter, dome and pointed head. There are other shapes, like hollowpoints, but they’re based on one of these three main shapes, so this is all I’m testing.

How I oil pellets
I oil pellets in the following manner. A foam liner is placed in the bottom of a pellet tin, and 20 drops of Whiscombe Honey are dropped onto the foam. Then, a single layer of pellets is spread on the foam, and the tin is rolled around. I shake the tin lightly to move the pellets around…but not enough to damage them. Whatever oil transfers to the pellet is all the oil it gets. I’ve been doing this for many years and it works well. 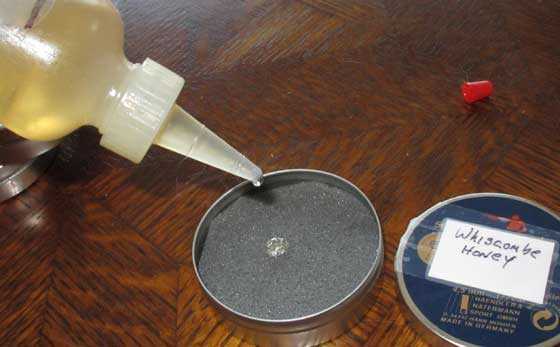 Twenty drops of oil on the foam is what I use. Then, a single layer of pellets. 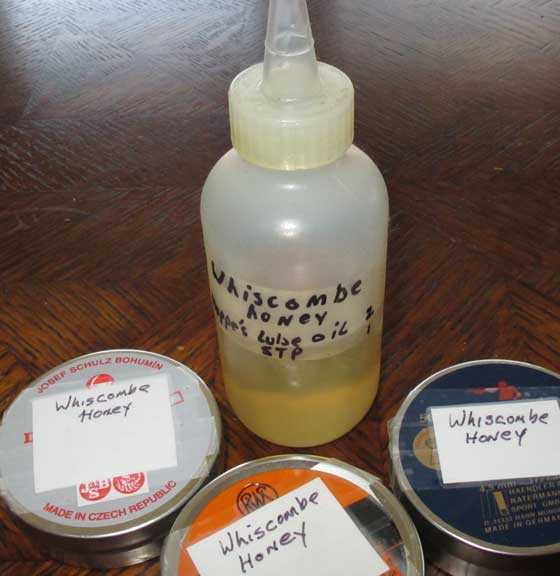 One tin for each type of pellet used in the test.

The pellets end up with a very light and uniform coat of oil. When I handle them the tips of my fingers become oily, but I can’t see any oil on the pellets. Other people use more oil than I do, but this is what I am testing.

Whiscombe Honey is a mixture of two-thirds Hoppes Gun Oil (not Number 9 bore cleaner!) and one-third STP Engine Treatment, by volume. Shake the mixture until is takes on a light yellow color. It will look like thin honey, hence the name. This mixture should not detonate easily in a spring gun.

Oiled pellets
Now, I shot two oiled pellets through the bore to condition it and began the test.

Oiled Crosman Premiers
Oiled 7.9-grain Premiers averaged 591 f.p.s., but the spread went from a low of 545 to a high of 612 f.p.s. That’s a spread of 67 .p.s. The average energy for oiled pellets was 6.13 foot-pounds. I did notice the pellets were going faster at the end of the shot string, so I thought I might come back to them after testing the other pellets.

Oiled H&N Neue Spitzkugel
Oiled Spitzkugels averaged 609 f.p.s. — which was a small increase over the same pellet when dry. The average energy was 6.99 foot-pounds. The spread went from 585 to 620 f.p.s, which was identical for the same pellet dry. Velocity and energy were both up slightly from dry pellets, and the shot-to-shot variance remained the same.

By now, it’s obvious that the bore needed more than two shots to condition it, so I retested the oiled Crosman Premiers. The second time the oiled pellets averaged 604 f.p.s., which is just 2 f.p.s. slower than the same pellets dry. But the spread that was 67 f.p.s. on the first test of oiled pellets and 39 f.p.s. with dry Premiers now went from a low of 594 to a high of 613 f.p.s. — a much tighter 19 f.p.s. total. The average energy was 6.40 foot-pounds.

Observations
From this test, I observed that these three pellets either remained at the same velocity or increased very slightly from the light oiling I gave them. In two of the three cases, the velocity spread got tighter when the pellets were oiled.

I further observed that it’s necessary to condition a bore with oiled pellets before doing any testing. As a minimum, I would say that 20 oiled pellets should be fired before testing.

These are very small differences from oiling; and although I can’t draw any conclusions yet, I would think that such a small change is not enough to matter. It hardly seems worth doing at this point. However, there’s still a test to be done in a powerful airgun. Until we see those results, I think it’s too soon to say anything for sure.

Although the question that drove this test was how much faster oiling pellets makes them shoot, I think we still have to take accuracy into account before forming any opinions.

And now for something completely different
Pyramyd Air is looking for a manager for their tech department. If you’re interested in the position, below is the job info and where to send your resume.

Directs and coordinates activities of the department in providing customers technical services and support; directly supervises employees. Responsibilities include but are not limited to:

Installs common accessories and kits in accordance with customer orders.

Must be detail-oriented with good mechanical aptitude.

Ability to prioritize and multi-task.

Hours: Monday through Friday, 9am until 5:30pm; longer hours and some Saturdays are expected, especially during our busy peak periods.

Send your resume to [email protected]

76 thoughts on “The benefits of oiling pellets: Part 2”