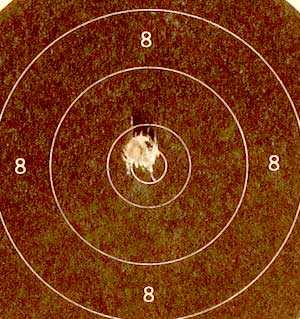 Before we begin today’s report, a word about my late friend, Earl (Mac) McDonald. His family has set up a memorial page in his name to collect finds for research into the causes of Creutzfeldt-Jakob disease, which is one of the names prion disease goes by. Most of you knew Mac only through his writing and testing here on the blog; but a few of you were friends with him through this hobby, and I thought you would like to know about this.

Today, we’ll continue testing the Benjamin Trail NP pistol. Although today’s title says Part 5, it’s actually the 6th report because I had to break Part 4 into sub-parts a and b.

We’ll look at the accuracy of those 3 lead-free pellets that Crosman provided with the test pistol. As before, I’m shooting at 10 meters, and the gun has a red dot sight mounted. I’ll describe all the other shooting conditions as we go. It has been so long since I last tested this air pistol that I had to read both parts of the fourth report to find out how to shoot the pistol for the best results.

I decided to shoot everything with the cocking aid attached. My testing demonstrated that it didn’t hurt the accuracy, and in a few cases it seemed to help it. At any rate, it makes the pistol easier to cock, so I left it on for this whole test.

Crosman Powershot Penetrators
The first pellet I tested was the Crosman Powershot Penetrator. It’s a synthetic-bodied pellet with a heavy non-lead metal core. They fit loosely in the breech, so I seated them flush but did not try to seat them deep. Since some of my best shooting was with the gun rested directly against the sandbag last time, I decided to start out that way. Imagine my surprise to see a near-pinwheel shot with the first pellet! [A pinwheel is a shot in the exact center of the target, and it refers to taking out the extremely small 10-ring of a smallbore target so that just the white scoring ring remains behind.] The shot was so good that I stopped and took a picture of it to show you — in case history was about to be made. This happens about one time every ten thousand shots or so for me, and it’s usually by pure chance. It is, however, the sort of thing that gives rise to lies and legends and is probably the basis for the Cargo Cults. 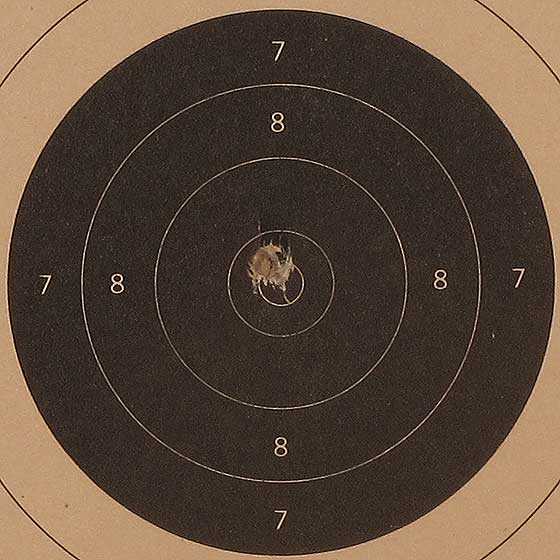 Just in case I was about to make history, I photographed the first shot of the Benjamin Trail NP pistol with Crosman Powershot Penetrators. 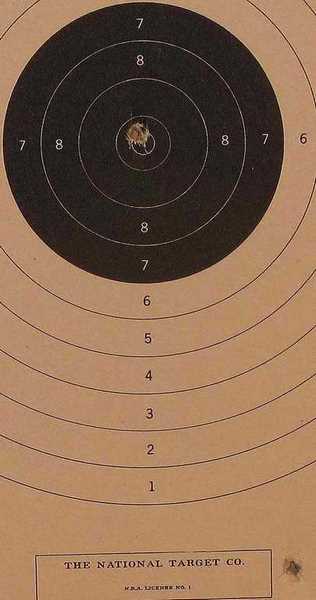 Shot No. 2 (at the bottom of the picture) made it clear that the first shot was a happy accident. Resting the pistol directly on the sandbag was not the thing to do!

Much as I would have loved to bask in the radiance of that first shot, shot No. 2 dispelled the miracle. Pellet 2 landed 4 inches south of the first one, humbling me once more.

Here’s a lesson in testing airguns. When something goes wrong like this, and all your experience says that it should have been wrong to begin with (resting a spring gun directly on a sandbag), take the hint and change your ways. So I did. I moved my hands forward of the bag and held the gun with no part of it touching anything except me. Then, I shot 10 more shots into a very decent group that measures 1.587 inches between centers. In the grand scheme of things, it’s not a bad group for this pistol. Not the best by any means; but for lead-free pellets, it’s not bad. 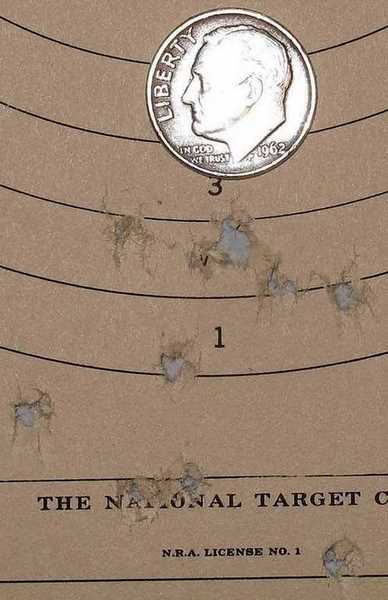 Resting the arms on the sandbag and holding the pistol free was the way to go. Ten flush-seated Powershot Penetrators made this 1.587-inch group at 10 meters.

Crosman SSP hollowpoints
Next, I tried the SSP hollowpoint pellets seated flush and with my arms resting on the bag but the pistol not touching it. This was how I held the gun for the remainder of this report. This time, 10 pellets made a slightly smaller group — measuring 1.513 inches. Amazing! Who would have thought that lead-free pellets could be so accurate? 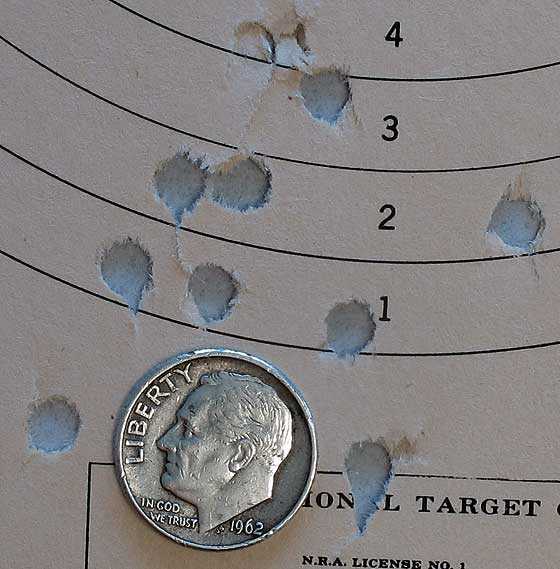 Ten SSP hollowpoints seated flush made this 1.513-inch group at 10 meters. This is a decent group for lead-free pellets.

This pellet fit the breech tighter, so I figured I could try to seat them deeply. Next, I shot 5 of the same SSP hollowpoints seated deep with the Air Venturi Pellet Pen and Pellet Seater. When the first 2 pellets landed very close to each other, I thought I might be on to something; but after 5 shots, I knew differently. I had a vertical string that measures 2.013 inches between centers. It’s very tight side-to-side, so I was holding the pistol okay…but the velocity of the pellet was way off, shot-to-shot. 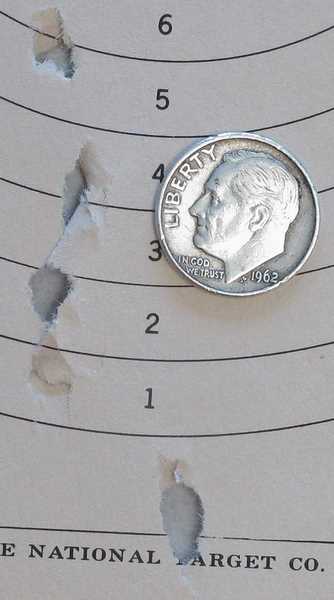 It took only 5 shots to learn that nothing was gained by seating the SSP hollowpoints deep. Group measures 2.013 inches.

The bottom line — deep-seating is out for this pellet. And another testing tip — I don’t need to fire a second 5 shots to figure that out. I can stop here and move on with the test.

Crosman SSP pointed pellets
The last pellet I tried was the Crosman SSP pointed pellet. This is another lead-free pellet. Instead of a hollow point, it has a pointed tip. The weight is the same 4 grains as the SSP hollowpoint. I seated them flush with the breech and started to shoot, but they were hitting so low that some were below the target paper. So, I stopped and adjusted the red dot sight up several clicks, then started the group all over. Ten pellets landed in a 5.004-inch group that told me the test was over. Sure, I could have tried seating these pellets deep or holding the pistol directly on the sandbag, but this huge group told me it wasn’t worth the effort. What was the best I could do — shade the hollowpoints by a fraction of an inch? No, I know when to hold ’em, and I also know when to fold ’em. Now, it was time to end the test. 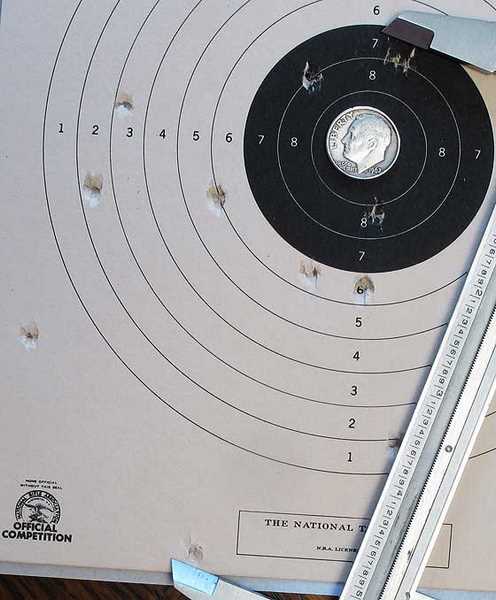 When your target looks like this, you’ll know what to do.

Impressions so far
I remain impressed by the Benjamin Trail NP pistol. For the money, it offers performance well beyond what most airguns of equivalent price can give you. It’s an air pistol you must be dedicated to, however, because it takes some getting used to. But for smashing power with decent accuracy, I can’t think of another spring pistol in this price range that does as well.

There is still one final test to do. I want to rerun the velocity test. That will establish if the hundreds of shots we’ve given this pistol to this point have finally broken in the gun.