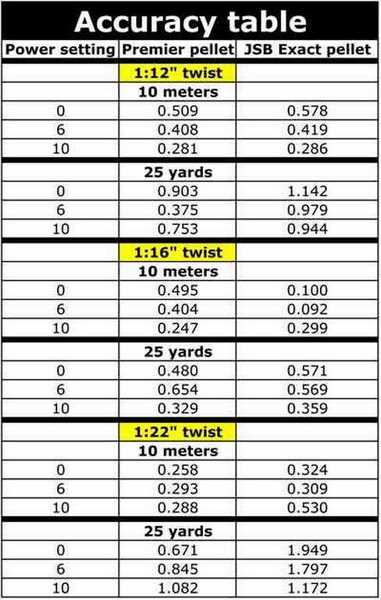 Before we begin, there was a request last week for me to test the Benjamin 392. I thought I’d tested it already, and it turns out I did. Click see all 5 parts on the old blog.


The question of barrel equivalency
Today, we’ll look at the accuracy side of this test, where yesterday we looked at how the twist rate affects velocity. Before I begin, however, we have to settle an issue that’s in a lot of people’s minds. Namely, is it reasonable to test barrels made by Dennis Quackenbush against a Lothar Walther factory AirForce barrel? Will the test results be skewed for that reason and not because of the different rifling twist rates? Or will the twist rates determine part of the results and the barrel’s pedigree determine the rest?

To carry that kind of logic out to its conclusion, every barrel will be different. Who’s to say that one Lothar Walther barrel is not better or worse than another? The fact is that we know that some of them will stand apart — being either better or worse than the norm. There’s no way to test the exact same barrel with all 3 twist rates because we cannot adjust the twist rate of a rifled barrel. Once it’s built, it is whatever it is. Three separate barrels have to be used for this test, whether they’re made by Lothar Walther or by someone else.

But in the end, we can never know if the barrels I’m using for this test are exactly as accurate as the Lothar Walther factory barrel I am also using. There is just no way to know that. There is, however, a way of getting pretty close. If the Quackenbush barrels produce some groups in the same accuracy range as the Lothar Walther barrel, then we can be assured that we are testing barrels of similar quality. We can never be entirely certain they are exactly as good, so this is as close as it is possible to come. And, by the same logic, that is all we could do if Lothar Walther had made all 3 barrels used in this test.

Lothar Walther is not going to make test barrels for a test like this unless they want to. There is no way to contract with them to make one-off barrels that have the different twist rates we are testing. They don’t make one-off barrels — at least not for the public. There are barrel makers who do make one-off barrels, and Dennis Quackenbush is one of them. We’re going to have to be satisfied with the barrels he has provided and look at the results to see if we believe his barrels are as good as the factory barrel we’re testing.

On with the test
With that issue set aside, let’s look at what the 3 barrels did in this test.

The group sizes in the table are shown in inches.

General observations
The first thing I looked at was the results of the 2 Quackenbush barrels against the factory Lothar Walther barrel, and I learned something interesting. At 10 meters, the 1:22″ twist barrel shot better than the factory barrel with Crosman Premier pellets — not by a little, but by a significant margin. On both zero and 6 power, the 1:22″ barrel made groups that were one-tenth of an inch smaller than those made by the factory barrel. On power setting 10, the factory barrel beat the 1:22″ barrel by only four one-hundredths of an inch. I think that’s significant. It shows that the 1:22″ twist barrel can keep up with and even exceed the Lothar Walther barrel…at least to 10 meters.

These results tell me that the two barrels made by Dennis Quackenbush are as capable of making good groups as the Lothar Walther barrel. The differences in the group sizes are less than the measurement errors made when measuring the groups. That puts the barrel equivalency question to rest in my mind. I’m willing to accept that the results of this test are from the different twist rates and not from the inherent quality or lack of quality of the barrels being tested.

The 1:12″ barrel shot Crosman Premiers best on power setting 6, but it shot JSB Exacts about the same on settings 6 and 10. There was a little difference with the Exacts, but it was down in the measurement error margin.

The 1:22″ barrel, on the other hand, got worse with Premiers as the power was increased. And the difference between the best and worst groups was large enough to be more than a coincidence. It was almost twice as large on power setting 10 as it was on power setting zero (1.082″ compared to 0.671″).

With JSB Exact pellets, that trend was reversed. The greater the power, the smaller the groups became. For both pellets at 25 yards, the 1:22″ barrel was not anywhere near the factory barrel at the same distance. Only at power setting zero with Premiers was that barrel close to the factory barrel, and the difference was still outside the measuring-error margin.

If you look at the results of the 1:22″ barrel, you’ll note that it falls apart at 25 yards. It held its own at 10 meters; but at 25 yards, it falls far behind the factory barrel.

The 1:12″ barrel does the same, but it doesn’t open up as much as the 1:22″ barrel. There are individual instances where one of the two Quackenbush barrels exceeds the other; but in general, what I’m saying holds true. The factory barrel, however, doesn’t work that way.

The factory barrel holds together at 25 yards, just as it does at 10 meters. Again, there’s a single instance at 25 yards where it is beaten by the 1:12″ barrel (power setting 6 with Premier pellets), but that stands out as the only time the factory barrel was beaten at 25 yards. We can say in this test the factory 1:16″ twist barrel outperformed the other two barrels at 25 yards. That allows me to say two things.

First, I predict that the factory barrel will be the most accurate at 50 yards. Second, I believe that the 1:16″ twist rate is the best twist rate of the 3 we’ve tested.

Don’t get too excited
This test has been too small to say anything with certainty. I said that before we began, and I’m saying it again now. All these results can do is suggest things that should be looked at more closely. Other pellets will give different results — I’m sure of that. And more testing will refine these numbers. Where there’s gross separation between the Quackenbush barrels and the factory barrel, I feel certain the trend will continue with more testing. But where things are close, there might be a reversal of the outcome. There simply isn’t enough test data to say otherwise.

The factory barrel is the best overall barrel in this test so far, and it gets better the farther the distance is to the target.

Because the other 2 barrels beat the factory barrel one-third of the time, I think the question of their quality can be laid to rest. Clearly, they’re giving the Lothar Walther factory barrel a run for the money.

What’s next?
Next, I’ll shoot all 3 barrels at 50 yards. I’m planning to shoot only power settings 6 and 10 with each barrel because of the distance involved. This will be outdoors, and the pellets will really scatter in the light breezes if they’re shot on the lowest setting. I will have to wait for ideal range conditions, so it may be quite a while before I’m able to make my next report.

42 thoughts on “How does rifling twist rate affect velocity and/or accuracy? Part 9”