When we last looked at airsoft upgrades, we talked about how the tuner has to look at the gun as a system. Improving one part of the gun without regard to the others usually won’t make much of a difference. In some cases, it may even make the gun prone to fail much faster. I told you about barrels and gearboxes last time. Today, we’ll look at the powerplant, itself.

The big difference is that airsoft powerplant parts are most often made of tough plastic instead of metal. And the coiled steel mainsprings found in airsoft guns are wimpy compared to the springs found in pellet guns.

Here’s an AEG airsoft piston with its mainspring. Note that this piston is made of nylon. Also note the piston’s final gear tooth is made of steel. 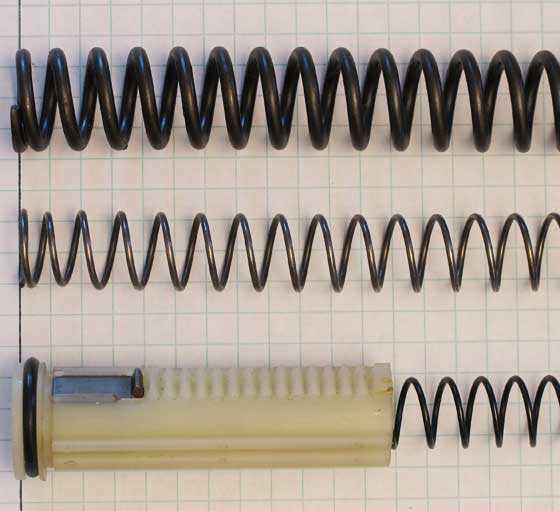 But they work! And they can be upgraded. You can install a heavier mainspring and a piston that fits the compression chamber tighter. These will boost your muzzle velocity. With some upgrades, it’s possible to boost the output so high that you have to use a heavier airsoft BB (plastic ball) to keep the gun shooting accurately.

We overlook what too much power does to our pellet guns, but it’s hard to ignore it when all your airsoft BBs are curving hard to the left, no matter how much you adjust the Hop Up! They go so slow and are so visible that you pay attention to them — like tracers in the nighttime sky — especially when you’re shooting a stream of shots on full-auto. So, you switch to the heavier BBs and find they’re even more accurate in that tight barrel you just installed.

My point is this — you upgraded your guns to get more velocity, but when you got it you lost accuracy. You had to switch to heavier ammunition to do what? Lower the velocity, again! Is that crazy or what?

Upgrading an AEG
While any type of airsoft powerplant can be upgraded, the most common type by far that people upgrade is the automatic electronic gun, or AEG. An AEG is a spring-piston gun that has a small high-torque motor to cock the piston. Because it’s electronic, a switch can be turned to make the motor operate just one time with every pull of the trigger — giving you semiautomatic fire — or to keep cocking and releasing the piston as long as the trigger is held down, which gives full-auto fire.

Unlike a firearm, the gun is not powered by the ammunition. It runs on electricity that powers a motor. As long as there’s juice in the battery, the action will cycle without regard to the presence of ammunition.

How an AEG works
The AEG has a large gear wheel that meshes with the piston. As the gear wheel turns, it draws the piston back until it reaches the spot on the wheel where there are no gear teeth. The wheel keeps turning; but when the teeth no longer hold the piston, the mainspring pushes it forward, firing the gun. The wheel continues to turn to the point that the gear teeth re-engage the teeth on the piston’s gear rack once again. The cycle repeats itself. 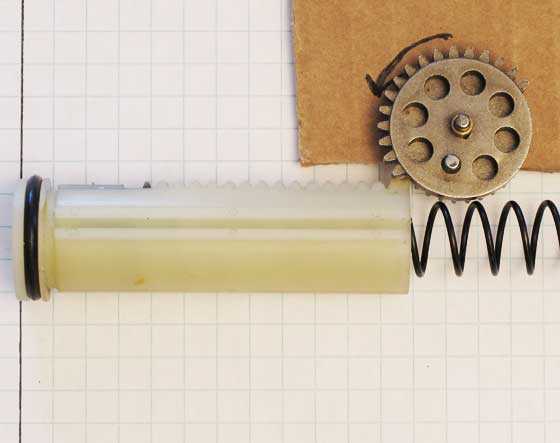 The AEG cocking gear is about to engage the first tooth on the piston gear rack. (Next photo shows this in detail) 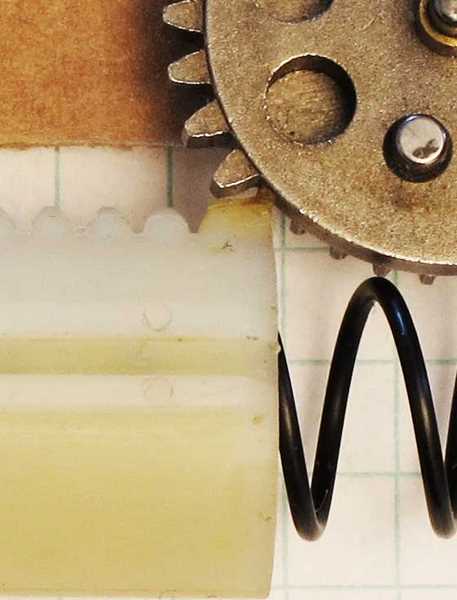 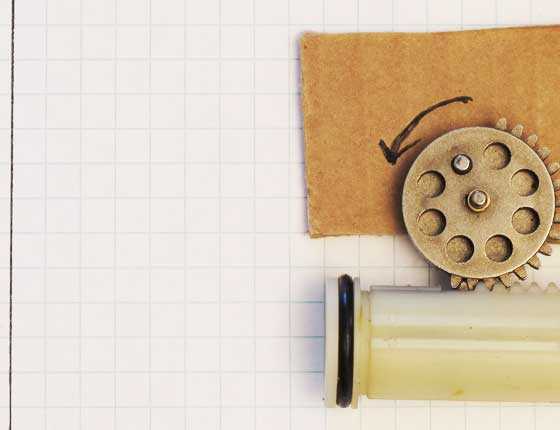 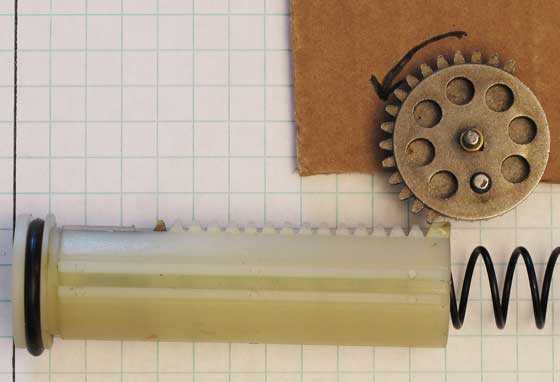 Now the piston has fired and the gear wheel has rotated to the starting engagement position again. This keeps on going as long as the trigger is held down when the gun is in the full-auto mode.

For semiautomatic fire, the gear wheel turns only to the point of releasing the piston one time. It will rotate round to re-engage the piston gear teeth but not rotate farther until the trigger is pulled again.

If you install a stronger mainspring and better piston and compression chamber in your M4 AEG, that wimpy 8.4-volt battery that came with the gun will probably not run it too well. The gun that used to fire 700 shots per minute now struggles to put 400 out in the same timeframe, and everything sounds over-stressed — which it is. You need a stronger motor to power that new setup and a stronger battery to run it. And, while you’re at it, better get a battery with a higher mAH (milliampere-hour) rating. That way your gun won’t run out of juice after just the first magazine.

But you don’t just get a bigger battery. Sometimes, there’s no room inside the gun to house a bigger battery, and other times the bigger battery will take too long to charge when it runs down. Perhaps, it’s also time to change battery technologies from NiCad to lithium-ion (Li-ion or LIB).

Upgrading the batteries and motor
I did a two-part article on airsoft batteries for Pyramyd Air back in 2008 and 2009. Here are the links: Battery basics –Part 1 and Battery basics — Part 2. Those articles were well-researched, and the information still holds true today. Maybe there have been some technical improvements, but batteries are still batteries.

I think you need to understand why you want a better battery. Sure, it’s for more power and so you can operate longer and recharge faster, but the battery does nothing by itself. It powers the motor that drives the powerplant. If you’re not upgrading that as well, you gain very little by just swapping batteries. Maybe you just get the gun to operate as well as you thought it would when you bought it.

It turns back on itself
So, you upgrade the motor, battery, compression chamber, piston and mainspring. Let’s say you even changed the gears from nylon to metal. Bully for you! However, as you shoot your new, more powerful gun, you notice the cyclic rate starts slowing down, again, after the first few thousand shots. This is exasperating because you’ve now doubled the cost of the gun by adding all these upgrades — not to mention hours of your time spent installing them and getting them to run right.

You tear down the gun, again, and discover that the holes in the metal gearbox that serve as anchors for the pins that the new steel gears run on are all enlarged. They’re no longer round but are becoming oval. The pins have loosened! That’s because either the gearbox itself (the housing that holds the gears) is too soft to take the strain of the upgrades you’ve installed, or you didn’t shim each new gear properly — and they’re slipping sideways as they operate. This puts undue strain on their axels (the pins). You have to figure out what it is and then either buy a replacement gearbox, or buy an upgraded gearbox (if one exists) or, most expensive of all, drill out all the pin holes in the existing gearbox and install steel bushings for the pins to rest in.

Is it really that bad?
Is upgrading an AEG airsoft gun really fraught with all these pitfalls? Not usually. If you proceed with caution and learn as you go, none of these things ever needs to happen, or maybe one will happen and you’ll be able to deal with it. The guy who suffers them all at the same time is the guy who just throws money at his gun without bothering to understand how it works in the first place.

How to proceed?
How should you proceed if you really want to upgrade your gun? Well, first I think you need to have a reasonable expectation of what can be done to the gun and why you want to do that. I remember watching an upgrade to a bolt-action sniper rifle a number of years ago. The owner wanted the absolute best of everything, so he went for the tightest barrel, the best piston and compression chamber and the strongest mainspring. Then, when he cocked his newly upgraded rifle for the first time, it suddenly dawned on him that the bolt that used to take 20 lbs. of effort to cock now took almost 40 lbs.! That gun was the baddest beast around, only nobody could cock it! Try cocking a bolt-action rifle that takes 39 lbs. of force some time if you don’t believe me.

Had this guy bothered to first research his project, he would have found this out before investing all that time and money. What he wanted was a bragging-rights sniper rifle with no thought of how to actually use the gun. How do you brag about a gun that nobody can cock? A good sniper rifle is accurate and not that difficult to cock. You don’t do it all with a heavier mainspring!

Allow me to make a comparison in the automotive world. You can buy a nice used Acura Integra and drive it daily, or you can lose your mind and mod the engine up to 1,000 horsepower. At that point (actually, long before you get to that point), the Integra is no longer suited for making runs to the mall. It’s sole purpose is to travel 1/4 mile in the least amount of time.

You can build an airsoft gun that launches 0.28-gram BBs at 550 f.p.s., if you want to. Just don’t expect to use it for anything beyond wowing your buddies at the chronograph. You left the real world of airsoft some time back.

A safer way to proceed would be to use kits that manufacturers put together for specific purposes. Read what users of these kits say about them before taking the plunge. Maybe, if the upgraded barrel you selected wasn’t so tight, you might get by with a lower-powered mainspring that was still an upgrade over your factory gun.

Another safe thing you can do is to upgrade a battery by one increment of voltage. It’s usually safe to go from an 8.4-volt battery to a 9.6-volt battery — especially if the gun you’re upgrading comes with metal gears. And you can upgrade the amount of battery storage capacity (mAH) without suffering anything except a possible space issue. A battery with a higher mAH rating is usually larger. On some guns like the M4s with the extendable stocks the batteries have to fit inside the forearm, so make sure there’s ample room before you buy the larger battery.

Summary
I could go on and on with this and that tweak, but I think you get the idea. Know what you hope to achieve before you break the bank trying for that last f.p.s.