Today is accuracy day for the Diana model 72 target rifle. We had one extra report in this series, and that was on adjusting the trigger. I want to tell you some more of what I have learned about this trigger.

More on the trigger
During the accuracy test, the trigger failed to work two times. The first time I made a small adjustment and got it running again in a matter of a minute. The second time, however, I worked on it for 15 minutes without success. I finally read Part 3 of this report, to see where the two adjustment screws had been positioned when the trigger was working. The camera angle of that photo isn’t the best, so there was still some guesswork involved; but even then I couldn’t get the rifle to fire.

Then, I thought of something. I know this rifle has a very protective anti-beartrap mechanism, and I wonderd if it was a little too over-protective. So, I cocked the gun, again (it was still cocked and loaded from when the trigger had failed). I’ve had other spring-piston air rifles — most notably Weihrauchs and a few Dianas — that would seem to cock but wouldn’t quite go all the way. How many people have I talked through cocking their RWS Diana sidelevers because they had not pulled the lever all the way back, and the gun was stuck? Even my Whiscombe has done this often enough that I’m used to it.

When it happens to the 72, the rifle is cocked from the standpoint that the piston is back and the mainspring is compressed, but it also isn’t fully cocked in that the trigger isn’t in the right position to fire the gun. It’s a sort of limbo state that some spring rifles can get into. Think of it as a disagreement between the trigger and the anti-beartrap device, and the designers have allowed the anti-beartrap device to trump the trigger for safety reasons.

All you need to do when this happens is cock the rifle a second time, making sure that the cocking linkage goes all the way back. When I did this, the 72’s trigger began working immediately. So, if you ever get one of these rifles, keep this in mind.

Accuracy
I began this test not knowing where the sights were set. After all, this rifle had been through a complete rebuild, so those sights presumably came off. And the action has been out of the stock several times over the past 2 years. So, the gun needed to be sighted-in.

As a side note, the manufacturing date on the left rear of the spring tube is November 1989. That puts it near the end of the production cycle (1979-1993, according to the Blue Book of Airguns).

The first sight-in shot was interesting, but the second was even more so, for it would tell me if this was an accurate rifle or not. It hit above the first shot, in the same line but the 2 holes didn’t quite touch. That was good but not what I had hoped for. I had hoped to see a single hole that had barely enlarged with the second round.

Shot 3, however, went into the same hole as shot 2, and shot 4 joined them. So, the rifle was probably accurate, after all. I clicked the elevation up two clicks and proceeded to the first record target.

Shooting for the record
The first 5 shots went into a group that measures 0.221 inches between centers. It’s a group you would love to see out of most sporting rifles but not impressive coming from a 10-meter rifle. Just to make sure it wasn’t me, I shot a second group with this same Finale Match Pistol pellet. As I shot, I could hear the voices of the newer readers, asking why I only shot 5 shots. So, on just this one target, I put 10 into the next group, which measures 0.269 inches. That’s encouragingly close to what just 5 shots did, so it renewed my enthusiasm. 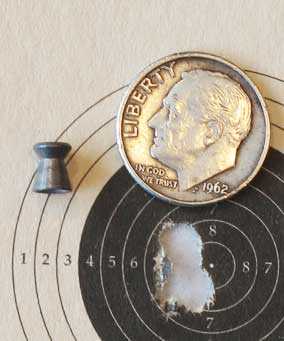 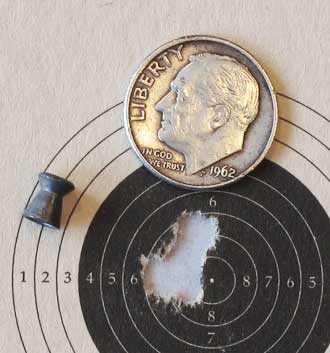 Ten H&N Match Targets made this 0.269-inch group. This is not that much larger than the 5-shot group. 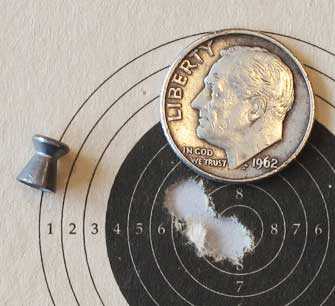 RWS Hobby
After that, I decided to give the RWS Hobby wadcutter pellet a try. Who knows what they might do? Well, that was a good decision this time, because 5 of them went into 0.194 inches between centers — the smallest group so far. 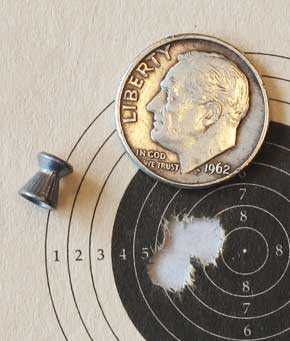 Five RWS Hobby pellets went into 0.194 inches at 10 meters. This is a good group.

At this point, I’d noticed that all the groups were landing off to the left. There’s no scope involved, so I can hit the center of the target and not destroy the aim point. I dialed in 3 clicks of right adjustment into the rear sight and continued the test.

JSB Match
Next, I tried JSB Match pellets. Five went into 0.264 inches. That was the second-largest group in this test, so no joy there. 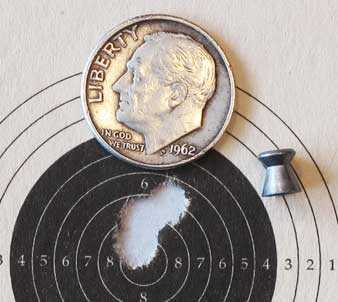 Five JSB Match pellets made this 0.264-inch group. Not that good.

Why 5 shots?
Before someone asks why I shot 5-shot groups, I’ll tell you. Accuracy is the reason. Ten-meter guns are generally so accurate that there isn’t that much difference between 5 and 10 shots. You only have to look at the first 2 targets to see the truth of that.

H&N Match Pistol
Next, I shot 5 H&N Match Pistol pellets. They’re a lower-cost pellet than the Finale Match Pistol, and sometimes they produce good results. This was to be one of those times. Five pellets made a round group that measures 0.166 inches between centers. That’s the smallest group of the test; and because it was noticeably smaller, I shot a second group to see if the first was a fluke. 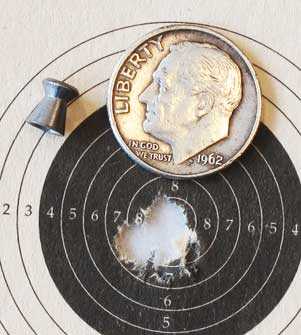 Now, this is a group! Five H&N Match Pistol pellets went into 0.166 inches.

It wasn’t a fluke at all, as you can see. The second group was a little larger, at 0.196 inches, but still one of the smaller groups fired in this test. 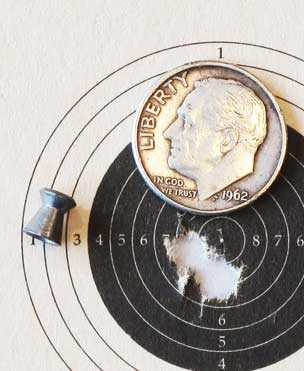 This second group of H&N Match Pistol pellets was shot to confirm the first one. It measures 0.196 inches, which is larger but still one of the smaller groups of this session.

Seating the pellets deep
Now that I’d tested 4 different wadcutter pellets, three of them being designated as target pellets, I thought I would take the best 2 and test them by seating them deeply in the breech to see if there was any difference. For this, I used the Air Venturi Pellet Pen and Pellet Seater that was also used in the velocity test. We learned then that the 72 doesn’t like pellets to be seated deeply where velocity is concerned. Let’s see what it does for accuracy.

The first pellet I tested this way was the H&N Match Pistol that proved to be the most accurate in the entire test. When seated deeply, they gave a 5-shot group that measures 0.23 inches between centers. While that isn’t bad, it’s larger than either of the two groups that were seated flush. They measured 0.166 inches and 0.196 inches, respectively. 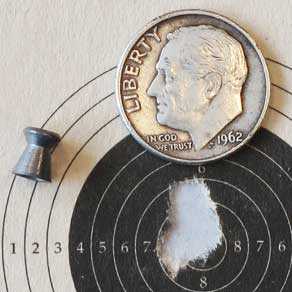 When they were seated deeply, 5 H&N Match Pistol pellets went into 0.23 inches. It’s larger than either of the 2 groups made with the same pellet seated flush.

And the last pellet I tested was the RWS Hobby. When seated deeply, Hobbys group in 0.252 inches. Again, this was not as small as the one group of flush-seated Hobbys that went into 0.194 inches. That leads me to believe that this rifle likes its pellet seated flush much better. 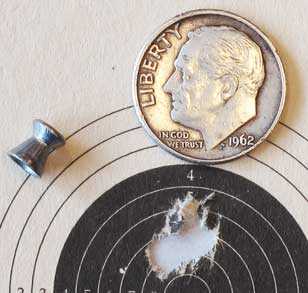 Five deep-seated RWS Hobby pellets went into 0.252 inches. This group appears smaller than it really is because some of the target paper has closed around the holes.

Summary
The RWS model 72 target rifle is a fine example of the quality and ingenuity that Diana can put out. They took a great informal target pistol — the model 6 — and turned it into a youth target rifle. They didn’t pour a lot of money into this airgun, with the rear target sight being a conventional, adjustable sight fitted with an aperture, but they did everything right. This is a youth target rifle to covet!

If you want one of these, you’d better start looking right away. There aren’t that many of them, and owners tend to hang on to them longer than they do most airguns.

This was a test of the recoilless model 72, but don’t forget there’s also a model 70 that’s based on the model 5 pistol that recoils. There are more of them to be found, and their recoil doesn’t amount to much since they were originally an air pistol. Either model is a great airgun that you should certainly look for if this sort of gun interests you. 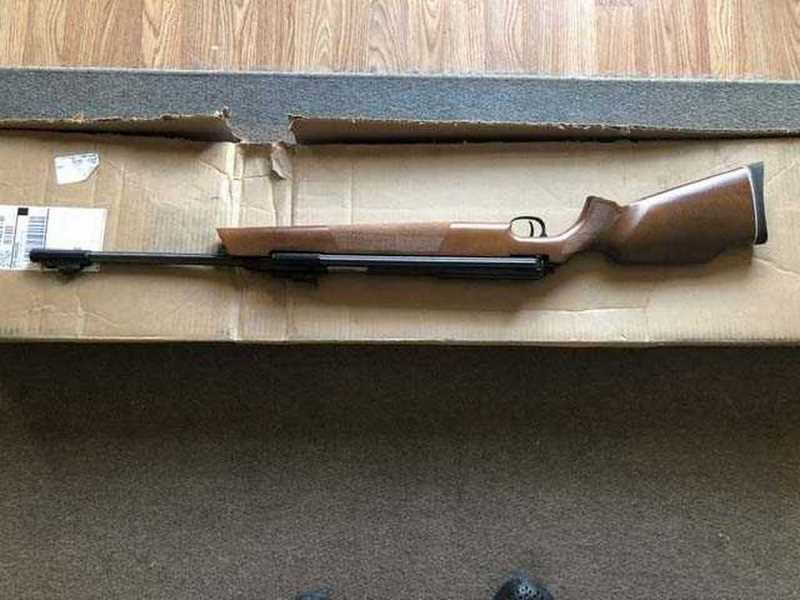