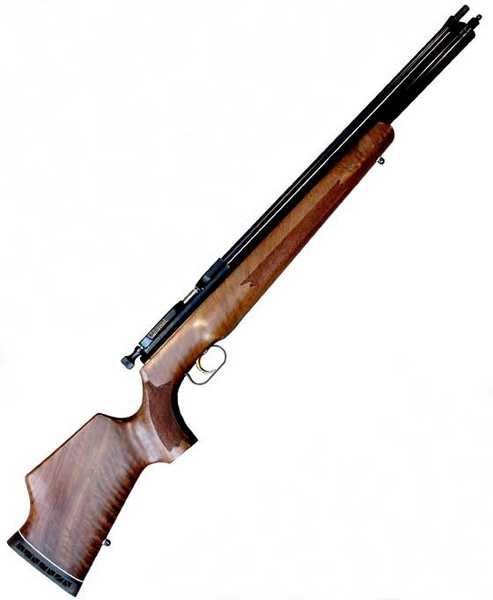 Message:
Thank you for your recent purchase of the Benjamin Trail Nitro Piston 2 airgun from Pyramyd Air (Part # PY-3368-6474). We have been notified by Crosman, the manufacturer of the Benjamin Trail NP2, that there were manufacturing process variances that may have affected some of the airguns in the initial shipment. We have determined that your order came from this shipment. While the variances appear to have impacted only a small number of guns and there are no safety issues, we would like to offer you the following options:

Our number one priority is the satisfaction and safety of our customers. We thank you for your continued loyalty and support.

Now, on to today’s report. This report covers:

• Things done differently
• Whassup?
• Ta-da!
• Summary
• Has this blog changed how you think about airguns?

Today’s report may not be very long, but it does represent an interesting bit of serendipity! This is a re-test of my Air Arms Shamal at 50 yards. Of course, that was shot outdoors at my rifle range.

Things done differently
The day was calm — perfect for shooting pellets with accuracy at 50 yards outdoors. You’ll remember that in my last test I went straight to the 50-yard range because I thought this rifle is so accurate that a lesser distance would be a wasted effort. Well, man plans and God laughs! My best 50-yard 10-shot group with 14.3-grain Crosman Premier domes, which I was sure were the most accurate pellets, measured 1.254 inches between centers. You can see that in Part 3.

While 1.254 inches for 10 shots is not that bad for 50 yards with an airgun, it’s certainly larger than I expected from this particular rifle. When I owned it before, I never shot it as far as 50 yards, but at 35 yards it was a killer. I just assumed it would hold together for the extra 15 yards; and when it didn’t in the last test, I was embarrassed.

Someone suggested that I clean the bore with a bore brush and J-B Non-Embedding Bore Cleaning Compound, so I did. I had to clean from the muzzle because the breech is not accessible with the bolt in the way. Because I couldn’t keep J-B Paste out of the transfer port, I didn’t use very much on the brush. Otherwise, the cleaning job was the same as always.

Then, I took it out to the range a second time 2 weeks ago, filled it with air and prepared to shoot. The Shamal is a single-shot, so getting it ready isn’t a big chore — or so I thought!

Then, I boarded the boat to Serendip. My first group on this dead-calm day put 10 Crosman Premiers into 0.818 inches! Yeah, that’s right! I shot a 10-shot group that can almost be covered by an American Quarter! Almost! 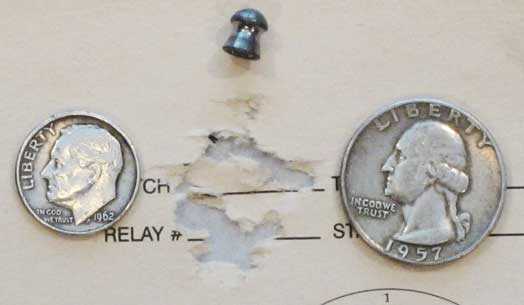 The first group of 10 Crosman Premiers went into 0.818 inches at 50 yards. It can almost be covered by an American quarter. That’s phenomenal!

Whassup?
Okay, what gives? This is the same pellet, same gun, same quiet weather, same distance, same shooter. Did I suddenly have an attack of virile youth? Did I suddenly remember how to shoot again? How can my groups shrink by almost a half inch (0.436 inches), when the only thing that changed was the calendar?

And why was the Shamal suddenly accurate — like I remembered? I wouldn’t mind being an old goat who can’t shoot anymore, but this off-and-on thing drives me nuts. It makes it hard to believe anything I write — even for me.

Well, the proof of the pudding, as they say, is in the eating. So, I decided to chance a second group on the same fill. You know — just to see what would happen. In case you haven’t been following this report closely, I discovered in Part 2 that this Shamal has a maximum fill pressure of 2250 psi and gets 16 shots before needing to be refilled. I’d already shot 10 on the current fill, so I’m wandering off the power curve to shoot another 10 — or at least that’s what I thought!

The next group stretched out taller than it was wide, with a max spread of 1.126 inches between centers. That’s considerably larger than the previous group, yet still somewhat smaller than the best group from the previous test. Well, I’m now off the power curve for sure, so it’s time to fill the reservoir. 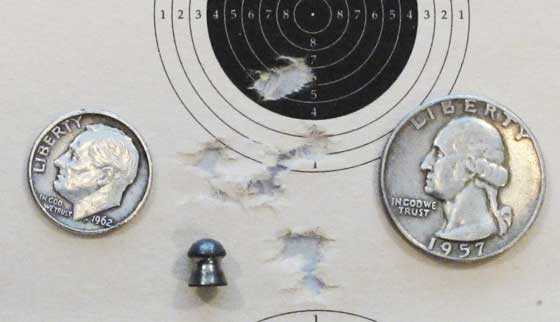 The second group on the same fill was strung vertically but was also smaller than the entire previous range test — at 1.126 inches between centers. Same Premier pellet.

Ta-da!
I connected the rifle to the carbon fiber tank and began the fill. When you start filling a PCP, you can always tell how much pressure is left in the gun, because the needle on the gauge will stop moving fast and start moving slower as the rifle’s reservoir opens to accept air. The point at which that occurs is the pressure that was already in the gun’s reservoir. This Shamal has a second quirk. It makes a loud buzzing noise when the reservoir is taking a fill. So, if you missed where the needle stopped, there will always be the noise to tell you when the rifle starts accepting a charge.

This time, the needle slowed down when it hit 2800 psi on the gauge, and that’s when the buzzing began! The rifle I was shooting had been overfilled to 3000 psi.

I was so shocked by this that I almost didn’t stop the fill. But I did and the rifle now had about 2900 psi in it. Going back to what was learned in part 2, the rifle was now grossly overfilled.

But curiosity demands to be satisfied, so I disconnected from the tank and returned to the shooting bench. The next 10 Crosman Premier pellets went into an identical 1.126-inch group! Oh, there’s no doubt some small size difference between them, but none large enough to see. Curiouser and curiouser! 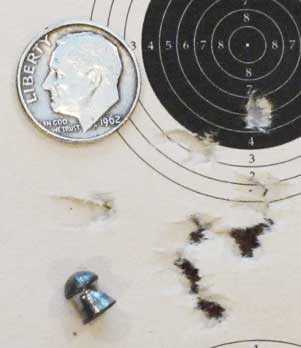 After refilling the rifle to 2900 psi, I shot this 1.126-inch group with Crosman Premiers.

Knowing beyond the shadow of a doubt that there was more than enough air remaining in the reservoir, I shot another group. These 10 went into 1.268 inches. That’s slightly larger than the smallest group I was able to shoot the last time (1.254 inches). That’s 2 more okay groups from the rifle, and a total of 4 for this day. 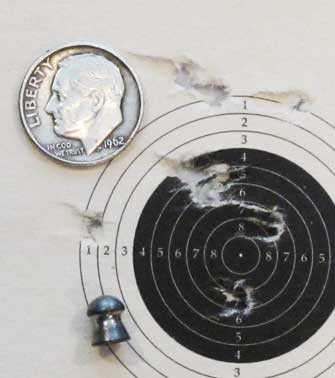 The final group was a little larger — but not much. Ten Premiers went into 1.268 inches at 50 yards.

But I know this rifle. It takes at least 40 shots to drop the pressure from 3000 psi down to 2250 where the power curve begins. I’d just fired 20 shots toward that end, but I’d also taken up more time out of a day in which I had another airgun to test — namely the Hatsan AT44-10 Long QE (read that report later this week). So, I stopped shooting the Shamal at this point.

Summary
I don’t know what’s going on, except that when this rifle is overfilled to the point that the pellets are leaving the gun at 650-690 f.p.s., it’s more accurate than when the gun is shooting the same pellet at about 790 f.p.s. Or at least that’s what it looks like. I think I need to get back to the range and do some more testing — a lot more testing!

Has this blog changed how you think about airguns?
I initially published this section on the May 30, 2014, blog, and I’m going to repeat it at least once a week through the end of July so it doesn’t get lost or forgotten.

From the comments many of you make, it sounds like the blog may have positively impacted your shooting and/or airgunning in general. I invite you to send me an email telling me about that impact.

I’ve gotten quite a few responses already, but I want to make sure you know that I’m not looking for “attaboys,” pats on the back or personal recognition. I’m looking for real feedback on how the information in this blog and the comments from your fellow blog readers have enriched your airgunning experience, what you’d like to know and what you’re still unsure of. This blog is written for its readers, and I want to share your stories with others who may be where you were before you found this blog.

Pyramyd Air has created a special temporary email address so you can send me your feedback. I’ll be the only person to get these emails, and we’re not going to generate any lists from the addresses.

My plan is to publish one or more blog reports with the more interesting comments. If you give me written permission, I’ll use your real name or blog handle, otherwise your comments will be anonymous.

This email address will be live for only a few weeks. We have tens of thousands of readers worldwide. Even if you’ve never commented on the blog, email me your message. If you’re reading this blog after July 2014, email submissions will no longer be forwarded to me, and you may get an auto-reply email stating that or your email might bounce back to you.