• Updates on the Ft. Worth airgun show
• On to the report
• Seating pellets — the unwritten lesson
• After seating, there was improvement
• JSB Exact RS pellets
• Single-action versus double-action
• How fast does it shoot?
• H&N Finale Match Pistol pellets
• How many shots?
• Trigger-pull
• Evaluation so far

Airgun collector Larry Hannusch will be displaying his ball reservoir airguns, so bring your camera. Unlike gun shows, this show allows cameras inside the show. There will be filming for TV and photography for print publications, plus filming for the internet all over the show. If that is a problem for anyone, they need to see me when they arrive. There will be a sign at the entry stating that filming and photography will be taking place on the ranges and in the hall.

Larry is also going to bring several Hakim air rifles to sell, for those who are interested in the type. He says these guns are more distressed, which will help with the price, so you may be able to afford this classic after all.

Scott Pilkington, a 10-meter airgun dealer, will be bringing some retired club target rifles. Many are FWB 300s in need of a rebuild and some TLC. RidgeRunner bought 2 of these from Scott and can tell you what to expect.

Umarex said they’ll have a drawing for an airgun at their table. That’s in addition to the three raffle guns and two door prizes I’ve already announced (AirForce Airguns Condor SS, Walther LGV Competition Ultra and Hatsan AT44-10 Long QE in the raffle — and Air Venturi Bronco and Benjamin Trail NP2 as door prizes).

A new big bore bullet maker, Tin Star Bullets, will be selling at the show, along with Seth Rowland (organizer of the Malvern airgun show), who also makes big bore bullets. If you have a big bore and want to bring it to the show, there will be lots of bullets to buy.

Crosman will be demonstrating their new .357-caliber Bulldog big bore air rifle at the show. They’ll be on the 50-yard range most of the day if you want to try it out.

There will be an informal reception at the show hotel on Friday, the evening before the show. I’ll be there to greet all who attend. It’s from 7:00 p.m. until 8:30 p.m.

I’ll also lead a caravan of cars from the hotel out to the show grounds on Friday at 4:00 p.m. If you want to scope out things the day before, this is your chance. There will be no setting up until Saturday morning at 6:30 a.m.

On to the report
I learned a lot about the Dan Wesson pellet revolver in today’s test. I’ll pass along all that I learned  because it looks like the manual hasn’t got a clue!

Seating pellets — the unwritten lesson
The manual that says nothing about seating pellets, other than to put them into the steel cartridge noses and attach them to the front of the cartridges. But then I shot the first 6 RWS Hobby pellets and noted that the velocity ranged from a low of 198 f.p.s. to a high of 354 f.p.s. in just 6 shots. That’s a spread of 156 f.p.s. I paused a minimum of 10 seconds between shots, so the spread wasn’t from any cooling. I even had three shots where no pellet came out of the gun! The average velocity for the cartridges loaded this way, and shooting single-action, was 271 f.p.s.

Seating pellets
This huge velocity spread, plus the times when no pellets came out, alerted me to the fact that maybe Hobbys are a bit too large for this gun and maybe they’re sticking in the cartridge noses. So, I inserted them deep into each steel nose with a ballpoint pen. This time the Air Venturi Pellet Seater did not work because it’s too large to enter these steel noses, but a common ballpoint pen worked well. I just laid the cartridge nose-down on my desk, dropped a pellet in the rear and then pushed it as far in as it would go. The desk stopped it perfectly at the end of the steel cartridge nose.

It takes time to load each cartridge this way. If you’re impatient, you’re not going to like this airgun. This process was part of what killed the sales of the Brocock Tandem Air Cartridges — many shooters just didn’t want to spend their time loading cartridges before they then loaded them into the airgun to shoot.

After seating, there was improvement
After deep seating the Hobby pellets, the velocity picked up. The next 6-shot string went from a low of 210 f.p.s, to a high of 321 f.p.s. — not good but better than the first time. The spread was now 111 f.p.s.

While this is an improvement, I felt that RWS Hobby pellets were probably just too fat for these cartridges, and subsequent testing proved me right. So, the Dan Wesson cartridges are sensitive to the size of the pellets, regardless of seating.

JSB Exact RS pellets
While RWS Hobby pellets are very light, they are also too large for these cartridges. JSB Exact RS pellets are slightly heavier, but they were much more consistent in velocity. A 6-shot string fired single-action ranged from a low of 271 f.p.s. to a high of 298 f.p.s. — a spread of only 27 f.p.s. They averaged 286 f.p.s., which is close to the Hobby average without the wild swing in velocity.

Single-action versus double-action
Up to this point in the test, all shots were fired single-action. That means the hammer was cocked and then the trigger was deliberately squeezed. This is the way most revolver shooters shoot their guns, because it’s the most controllable and also the most accurate. But I sensed the Dan Wesson might work better in the double-action mode, when the trigger is pulled through for each shot — no hammer cocking. So, I switched to that mode and got the following results with the JSB Exact RS pellets.

Six shots now averaged 317 f.p.s. — an increase of 31 f.p.s. over single-action. The low was 310 f.p.s. and the high was 325 f.p.s., so the spread was 15 f.p.s. — a decrease of 12 f.p.s. over shooting in the single-action mode. Clearly, the Dan Wesson revolver works best in double-action. And, just as clearly, deep-seating the pellets is essential to consistency. And you want to use pellets that aren’t too wide.

One final observation — at least one reader mentioned that these pellet revolvers were known to produce velocities well below the advertised 425 f.p.s. We’re seeing that in this test. While the velocity is not bad, it is absolutely 100 f.p.s. below the advertised numbers.

How fast does it shoot?
Some people just want to know how absolutely fast the gun will shoot, so I tried it with both RWS HyperMAX pellets and with Crosman SSP Hollowpoints. Both pellets fit the steel cartridge noses very loosely and fell out of the cartridges as I was loading the gun.

Crosman SSP Hollowppoints averaged 486 f.p.s. with a low of 474 and a high of 498 f.p.s. I shot both of these lead-free pellets in single-action because, as I mentioned, they were falling out of their cartridge noses. I didn’t want to tie up the gun’s action.

So, no arguments about the gun making the advertised velocity. However with the types of pellets you’re likely to shoot, plan on 100 f.p.s. less.

Trigger-pull
The trigger broke at 5 lbs., 14 oz in the single-action mode. That is a single-stage trigger-pull, as well — don’t get confused. The double-action pull is 8 lbs., 6 oz, which is extremely light for a double-action revolver. People pay hundreds of dollars to get a trigger-pull like that on a firearm.

Evaluation so far
I feel that this revolver is not going to appeal to as many shooters as we first thought. It was made by an airsoft manufacturer whose corporate focus is perhaps different than that of Umarex and Crosman — both airgun makers. I didn’t tell you this yet, but the entire barrel moves forward and back under spring pressure to lock the cylinder in position when firing. That may be okay for plastic balls and Hop-Up; but when Anics tried it in a pellet pistol, the accuracy went out the window.

Naturally, I will test the gun for accuracy. But you now see that I’m going to have to shoot it double-action, which isn’t the easiest way to shoot a revolver. I’ll also try it single-action, so we’ll see the best it can do. I still have hopes for the gun, but today’s test was revealing. 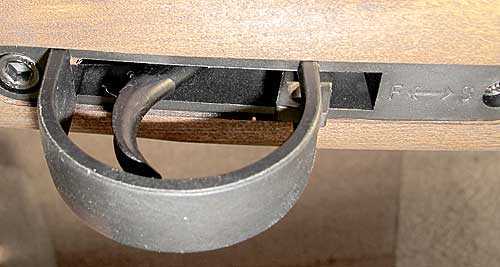