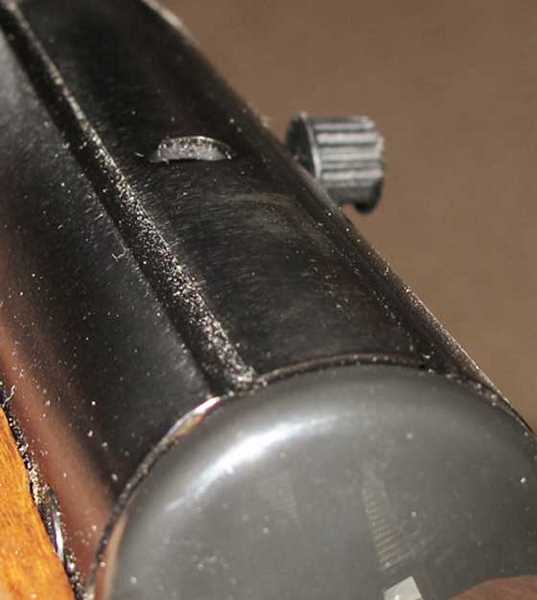 
What we’re doing
Today, I’m going to mount a scope for you and show some of my mounting techniques. These have been available for 10 years in the Pyramyd Air articles pages as a 3-part series — Part 1, Part 2 and Part 3.

Many things going on
I’ll also add some things to this report. For starters, I’m making this a multiple blog by also reporting on the new Diana Bullseye ZR recoil reducing scope mount. And, I’m installing this mount on the BSA Supersport SE that I promised would have a Part 4. Another benefit! Finally, I selected the Aeon 8-32X50 AO scope with trajectory reticle for the rifle. The special trajectory reticle can be useful when shooting rifles at different distances. Aeon also has the same scope equipped with other reticles.

The Diana Bullseye mount is also sloped for some barrel droop compensation. Because of that, it ‘s important to orient the arrow on the mount toward the muzzle.

In today’s report, the focus will be on how to mount a scope. I’ll point out some features of the other products, but each will get its own special attention in other reports. This will just be your introduction to most of them.

First things when mounting scopes
I’ll assume you’ve read Part 1 of this report, and I don’t have to recap those subjects. The first thing you need to do is clean both the scope base on the gun and the bottom of the scope mount. Let me show you why.

Horrible, isn’t it? This is what happens to dovetails when they sit around for a couple days! I used a camera flash to highlight the dirt. Use a powerful flashlight and magnifier to see it stand out like this.

Clean the gun and mount
Use a cotton swab and alcohol to clean each dovetail (there’s one on the opposite side), and also clean out the vertical scope-stop pinhole. After that, use a toothbrush, or better yet, a makeup brush (finer bristles to get into smaller places) to brush out the remaining dirt. 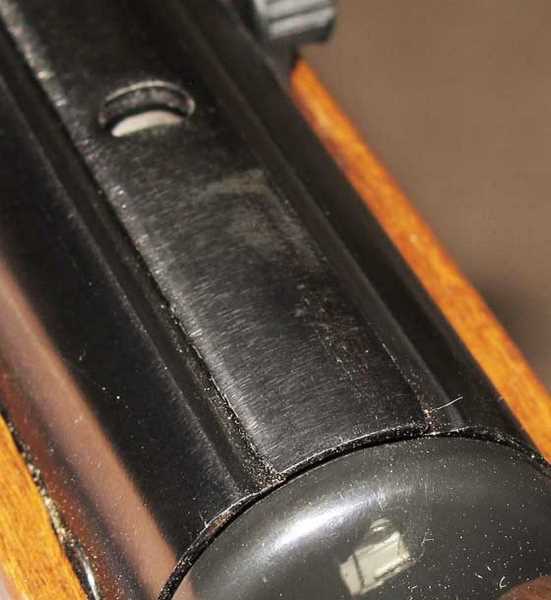 Yes, it’s clean. Unless you have access to a clean room, this is about as good as it gets. The alcohol got rid of the oils that hold the dirt. and the fine brush swept them away.

I’m not going to tell you to not obsess over cleaning the dovetails. You’re going to do what feels right to you. Just bear in mind that there’s a vertical scope mount stop pin that’s going into that hole on top of the gun, so we could have greased the dovetails and the mount still would have held. Cleaning before an installation is just a good habit to get into.

The mount
The Diana Bullseye is a one-piece scope mount — meaning that both scope rings are attached to the same base. This kind of mount gives the least amount of flexibility for positioning the scope and is also very particular about which scopes are used because the rings cannot be moved. But because of how this Diana Bullseye mount works, this is the only way to mount it. Let me show you how it works.

On the bottom of the mount base, there’s a pin that’s inserted into that hole on top of the rifle. When the gun fires, the recoil tries to move the mount backwards and the pin contacts the back of that hole to prevent the mount from moving. 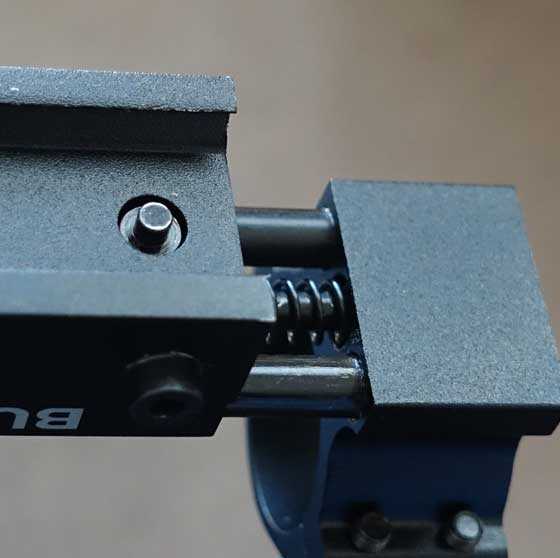 That pin on the underside of the Bullseye mount is inserted into the hole on top of the rifle when the mount’s attached. Slide the mount back (away from the muzzle) until the pin contacts the back of the hole, then tighten the base screws. 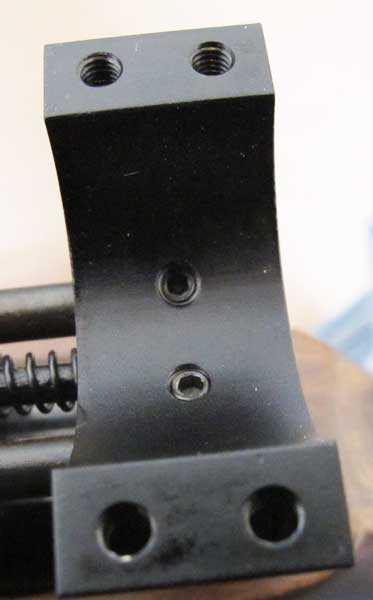 Each ring on the Bullseye mount has 2 setscrews that tighten the lower ring half to the guide pins.

Installing the mount
Once the mount is on the rifle, tighten the 3 screws on the base. Tighten them in turn — 1, 2, 3 and then go around again and again until they’re tight.

Now, remove the 8 screws from the ring caps and take the caps off the mount. This opens the rings to receive the scope. At this time, notice if the screws have oil on their threads. Some mounts do and others don’t. If there’s oil, remove it with alcohol. If you want to use blue Locktite on the cap screws, now is the time to apply it. These screws were dry.

Install the scope
Next, lay the scope in the lower rings on the rifle. 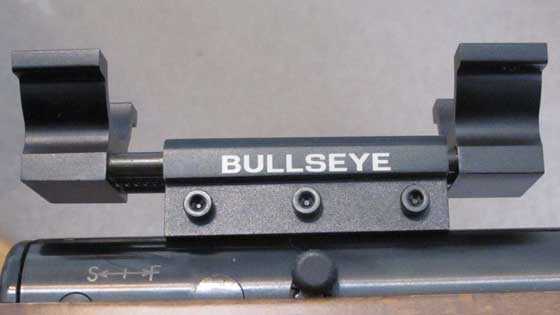 Ring caps off. Next step is to lay the scope in the lower ring halves. 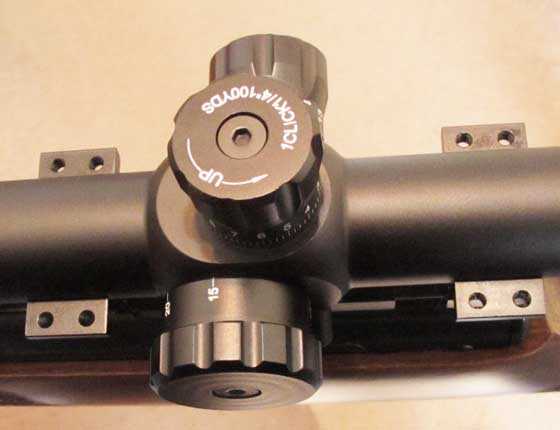 The scope is laid in the rings.

Once the scope is in the rings, carefully shoulder the rifle and slide the scope to the point that the entire image can be seen. Be careful to not drop the scope from the rings. If you feel the need, you can put the top caps on the rings for this, but don’t tighten them yet.

Install top caps and screws
Once the eye relief is right, install the top caps and all 8 screws. Tighten each screw to the point that the scope can still be turned. The object is to get the same amount of cap separation on each side of the caps. 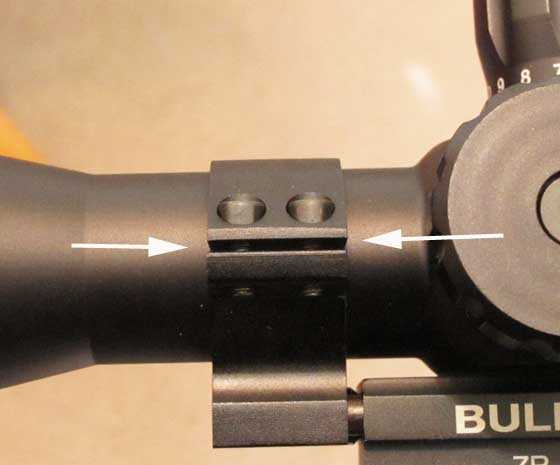 Tighten all 8 cap screws so the gap (arrows) on either side of both caps is equal.

Some people make this into a terribly complex procedure, but here’s my thought. Since you’re the one shooting the rifle, the reticle has to look right to you — and you, alone. As long as it does, you’re finished.

Time to tighten the caps
Now it’s time to tighten the cap screws. This is done in a certain order. Tighten screws 1 through 8 in order, then back to 1 and go through 8 again and again until all screws are tight. Use the SHORT leg on the Allen wrench until it will turn no more. Then, tighten just a little more using the long leg as the handle. 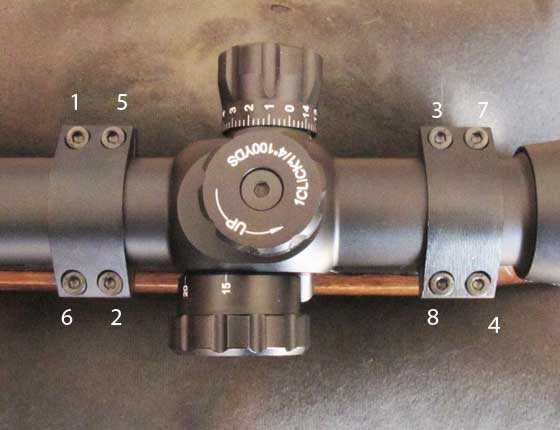 Go in order 1 through 8 and back through the same order until the cap screws are tight.

Walther installs sights and scope mounts for Olympic competition guns this way. They even have Allen wrenches with long legs and loops on them for 2 fingers to fit into. They can tell when the long leg of the wrench starts bending, the screws are tight enough. Whatever you do, do not overtighten these cap screws.

Shoulder the rifle, again, and make certain that the vertical reticle is still in the right place. If it is, you’re done. If not, loosen the cap screws and start over.

It took me about 15 minutes to install this scope and mount. This was one of the easiest scope installations I’ve ever done — mostly because those Bullseye mounts installed so easily.