Today, you’ll see the real reason I’m testing the .25-caliber Gen 2 Benjamin Marauder. I had not planned on this test at all! In fact, I found a high-end European air rifle at the SHOT Show that I planned to test for Shotgun News and my personal website. I tried to order that rifle, but it just never happened. So, when Dave Rensing of R. Arms Innovations (RAI) approached me with his modular stock at the Malvern airgun show, I decided to buy a Marauder and test it in a way I’ve never done before. This test will become part of a much larger feature article in Shotgun News this November, which is their full-color edition. If you can’t buy the magazine, don’t fret. It will also be posted on my website a few months after it’s published.

I chose the .25-caliber Marauder because of its Green Mountain barrel. It has a reputation for tack-driving accuracy that I’ve already caught glimpses of at the range. I won’t get into that today, as this report is about assembling the Gen 2 Marauder in the RAI modular stock with accessories from both RAI and Leapers. But, I will say that I collected some valuable data that will help me tune this rifle for optimum performance in the future. 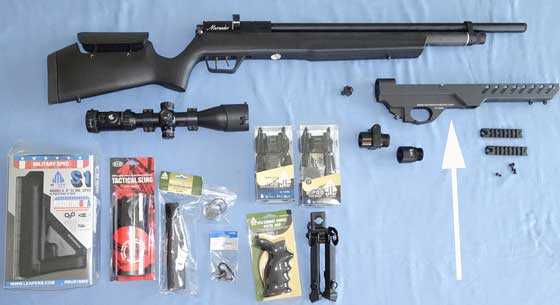 The Gen 2 Marauder with the RAI modular stock (arrow) plus other RAI and Leapers accessories. When the boxes arrived, it felt like Christmas!

The modular stock looks small next to the original synthetic stock, and it is. But the modular stock is machined from aircraft aluminum, so it has the strength to accept all the accessories. It isn’t a whole stock at all. It’s just the forearm that accepts the action, and RAI calls it a chassis. It’s set up to accept an AR-15 style buttstock, and it gives you many options to choose from.

The AR-15 is the civilian version of the M16 battle rifle platform — the firearm equivalent of a Lego set. Modularity is one key feature of this platform, so the options you see here are but one set of possibilities for the Gen 2 Marauder.

Because there are so many options, you have to look at the modular stock as a base for building a rifle. I’ll talk you through my set of options and explain why I decided upon them. Dave sent the stock to me with an AR-15 triggerguard already attached, but this is the first part the buyer must choose. I found 7 variations to choose from on one popular firearms website, so this is your first choice.

The RAI modular stock came with an oversized AR-15 triggerguard attached. This is a part the buyer must supply.

The main reason for taking on this project is the possibilities of different butts that I can select for my Marauder. Dave showed me a clever adapter at Malvern that allows the butt to swing to the left side of the rifle, thus significantly shortening the overall length of the gun. Dave makes this adapter, and it was a chief interest of mine for this project, so he supplied one.

Not only does the butt swing out of the way; but when it does, it opens a port for adjusting the striker spring tension with the butt attached. The factory stock also allows for this. But what the factory stock does not allow is adjustment of the air transfer port while the stock is installed. The RAI modular stock permits that adjustment at any time. This is a feature the public has begged for since the Marauder was launched. These 2 features allow the shooter to easily and quickly adjust both the velocity (air transfer port adjustment) and the reservoir fill pressure (striker spring tension). 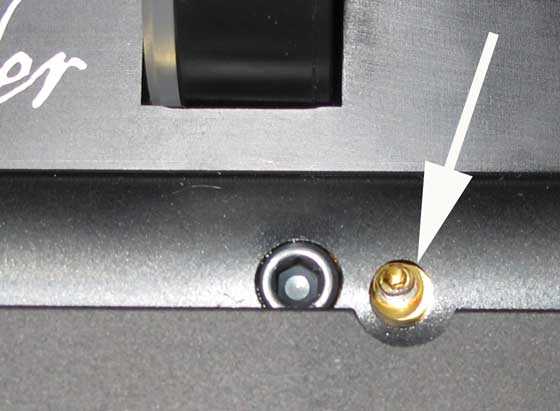 The RAI modular stock has a cutout so you can adjust the air transfer port (arrow) without removing the action from the stock.

The swing butt adapter attaches to the modular stock, then the buffer tube screws into the other end. Obviously, the tube has no buffer spring installed (it isn’t needed). Fortunately, Leapers sells the tube by itself. I planned to install a UTG 6-position mil-spec adjustable butt, so I used their mil-spec buffer tube. Mil-spec buffer tubes are a different size than non-mil-spec tubes, so pay attention if you go this route. 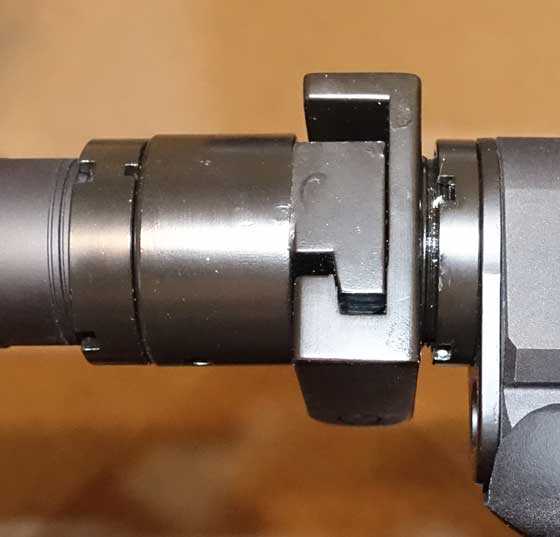 The butt swing adapter attaches to the modular stock, then the buffer tube screws into it.

Leapers supplied a large number of parts for this project. The mil-spec buffer tube was screwed into the RAI swing adapter and locked in place with a castle nut. Then, the 6-position mil-spec extendable buttstock was slid onto the buffer tube. This completed the rifle’s butt, though RAI did supply another option.

If you don’t want the butt to swing to the side, there’s a separate RAI butt adapter that lets you adjust the butt for some different heights or for some cast-on and cast-off — depending on your desire. Then, you have a rigid butt that, once adjusted, fits you perfectly.

With the butt installed, the next step was to install the pistol grip. As with most of the parts, the modular stock accepts all AR-15 pistol grips, so I selected the UTG Sniper grip for my rifle. It has finger grooves and is made of a rough synthetic that’s grippy. It feels just right in my hand.

The RAI modular stock is much smaller than the factory stock but doesn’t include things like the grip and the butt, plus the adapter and buffer tube for the butt. In factory trim, the Gen 2 Marauder in synthetic stock weighs 7.3 lbs. That’s before the scope is mounted. The rifle as modified for you today — again, minus the scope — weighs 9 lbs. The new forearm is much slimmer than even the forearm of the synthetic stock that was itself a great reduction in bulk from the original wood stock on the Gen 1 Marauder, but the combined parts are heavier.

I still have to add the scope, which is that new UTG 2-16X44AO Accushot scope I’ve been testing for you on the factory Gen 2 Marauder. I’m finding it to be everything I want in a scope for the field and an ideal match for this hunting rifle I’m building. With it mounted, the rifle weighs 10.5 lbs.

Blog reader Kevin asked me if the reticle lines in this scope are thin, and I told him they are. Last week, I discovered just how handy that illuminated reticle is. I lost the center of the reticle in the black bull at 50 yards because the day was overcast. So, I turned on the illuminated reticle and switched it so the lighted lines were faint. That made the crosshairs as thin as they could be, and I was able to bisect the center of the bull quite easily. It resulted in 6 shots from one pellet going into 0.417 inches and from another pellet into 0.552 inches at 50 yards. Without the ability to see the center of the reticle, both groups would have been larger.

Finally, we come to the bipod and sling — both Leapers UTG products. For hunting, the sling is essential for carrying the rifle. I have the UTG rifle sling. The bipod is less essential, but that will be dictated by how you hunt. I have a choice of 3 UTG bipods to choose from — the UTG rubber armored folding metal bipod you’ve already seen, a UTG tactical bipod that extends 6 to 8.5 inches and a UTG tactical bipod that pans (allows rotation of the rifle on the bipod). That’s a lot to test, and I plan on trying all of them.

It took me 45 minutes to install everything mentioned in this report. Nothing was difficult, but most things required some thought. The onboard pressure gauge is still visible on the bottom of the stock, and the rifle looks ready for the field. Better yet, it fits me quite well. I was concerned over losing the adjustable cheekpiece of the factory synthetic stock, but the straight line of the AR stock raises my sighting eye to the correct height. Had it not, I could have also installed the RAI adapter that allows for some movement of the butt and raised it that way.

The butt swing adapter attaches to the modular stock, then the buffer tube screws into it.

I bet you’re interested in what this modification costs. I can’t possibly cost all the options for you because they largely depend on your personal tastes, but the bare RAI modular stock (they call it a chassis) retails for $309.99. The chassis with a rigid butt adapter, a 6-Position UTG mil-spec butt, an AR standard pistol grip and an AR oversized triggerguard retail for $447.99. The side-swing adapter costs $29.99. And, of course, you can order the parts from RAI and mix and match to your heart’s content.

The UTG parts to which I’ve linked have prices, so you have what you need there. And nothing stops you from selecting other AR-15 accessories in place of those I’ve shown.

Next, I’ll begin testing the modified rifle at the range. As mentioned earlier, I already know a couple things, so this test is well underway.

The 2015 Texas airgun show is approaching fast! The show will be held on Saturday, August 29, and the reception will be the evening before. Don’t forget that you’ll get to watch a Round Table segment being filmed for the American Airgunner TV show at the reception. And, the film crew will be at the show all day.

Don’t miss the big bore match and be sure to participate in the action pistol and rifle matches we have planned for everyone. And, plan to buy some raffle tickets for the wonderful prizes that will be given out all day long. Your admission to the show also enters you in the door prize drawing at no extra charge.

If you want a table at the show, act now while they’re still available. I expect them to be gone before long. The information for tables, the motel and the reception is on the show flier.