The history of airguns is fascinating to those who enjoy applied creativity. But sometimes when creativity is carried too far it becomes a liability. And that’s the case with today’s guns.

In the 1970s the Rocky Mountain Arms Corporation (RMAC) created a little gun for kids who wanted to shoot with their fathers. They referred to it as a .22 caliber, though it shot a number 4 buckshot that is really 0.24 inches rather than 0.223 inches in diameter. That didn’t matter because a 5-pound bag number 4 buckshot was available for a few dollars. For that you got thousands of shots.  Nobody worried about the size of the ball that much.

The RMAC blackpowder rifle was from a simpler time, as the graphics on this box suggest. 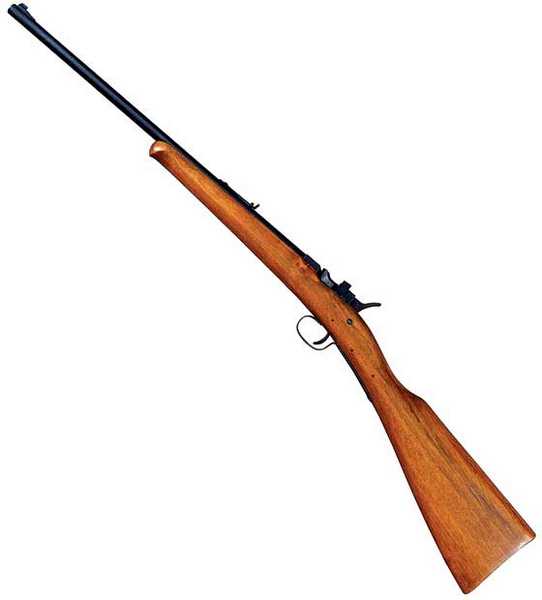 The breech of this little gun swiveled to either side, allowing the shooter to pour a small charge of black powder into the chamber. Maybe as much as 5 grains would fit inside, together with a ball. A number 4 buckshot ball was then pressed into the front of the chamber on top of the powder and the breech was swiveled back to align with the barrel and the hammer. At the back of the chamber there was a flash hole similar to the percussion cap hole on a percussion gun. A steel cover shaped like a cup fit over the rear of the swivel chamber, covering this flash hole. When the shooter had loaded the chamber, he placed one or more toy caps over the flash hole, than slid the cup-shaped cover over the rear of the swivel chamber. 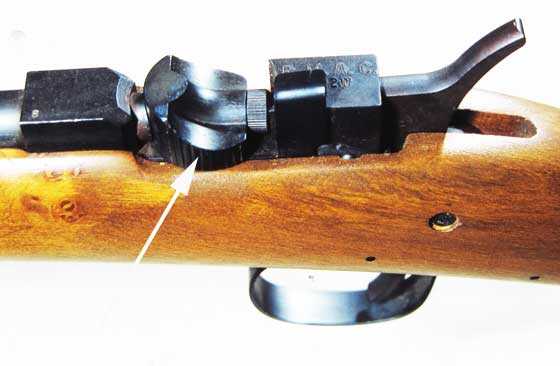 The breech (arrow) swivels to the side for loading. 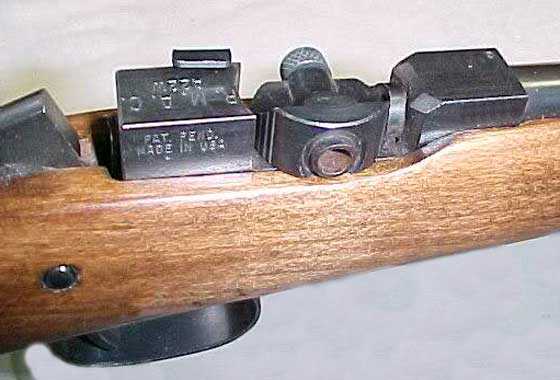 The gun has a hammer that is manually cocked after loading. Firing releases the hammer to strike the cup-shaped breech cover, mashing it down on the toy caps and hopefully igniting them. The spark from the cap(s) travels through the touch hole, igniting the charge of black powder and sending the small lead ball on its way down the bore. So far, so good.

I’m sure the young shooters were fascinated by their “real” gun for a while. But when they became accustomed to it, their minds began to wander. What if they filled the chamber to the top with black powder and just rammed the lead ball down the muzzle of the rifle like dad did with his gun? And then — what if we dropped even more powder into the muzzle after loading the chamber? The bullet would go even faster — wouldn’t it? Let’s try it and see!

Ahh, you say. It’s easy to see where this idea goes off the tracks. Good thing that “they” made it in such a small caliber. Well, guess what? They didn’t just make little ones. This rifle was also produced in .36 and .45 caliber. They used regular percussion caps instead of toy caps, but they operated the same way. Those rifles are much rarer than the smaller one, so I assume fewer were made. But here’s the deal. Any kid who knows how to shoot one of the small rifles knows how to shoot them all. If dad has a .45, junior can load it and shoot it. Bad idea all around.

RMAC wasn’t the only company to have a bad idea. Every few years I am contacted by someone who claims to have invented an entirely new kind of airgun — one that uses percussion caps or primers to propel a pellet or bullet. They are very secretive when they come to me, not wanting anyone to get wind of their wonderful new invention. Except there is nothing new about it! People have been doing the same thing for the past 170+ years!

The percussion method of igniting a change of gunpowder is credited to Reverend Alexander Forsythe, who patented the scent-bottle lock in 1807. His charge of priming powder was loose and dangerous, and it wasn’t until it was made into a solid pellet and put into a convenient container — the percussion cap — around 1820, that the percussion system of ignition took off.

Around 1840 — but nobody knows exactly when — someone got the idea to use just the power of the percussion cap to launch a small lead ball from a gun. This development progressed in several different ways. Flobert designed the flanged cap that he added a ball and later a conical bullet to — making the first self-contained cartridge. From that invention, Smith & Wesson partnered to launch the .22 short cartridge in 1856.

But the percussion-cap-only guns also continued to be made. And they split into two distinct directions. One was a simple parlor gun that was a novelty, only. It was a fun gun, if you will — not that different from a modern pellet gun. 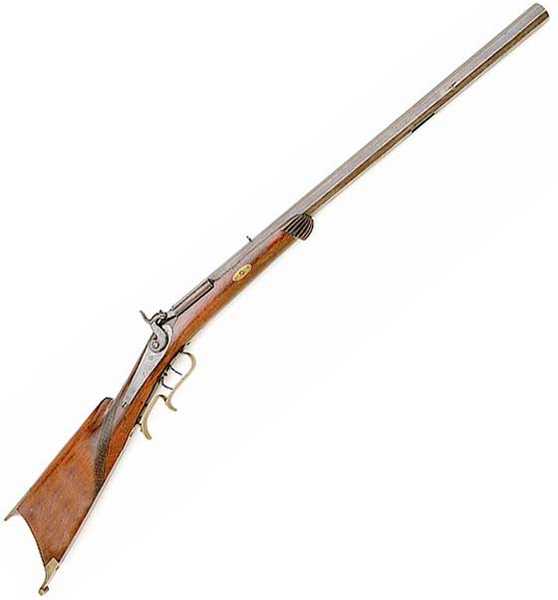 This cap-firing gun made by American gunsmith Jacob Bandle was more of a curiosity than a target gun.

The other was a precision target rifle designed for indoor target practice. This latter rifle was called a zimmerstutzen (NOT a zimmer schuetzen, as some say) and evolved up to the first world war. Zimmerstutzens are still being made today and there are still indoor matches for them. You can read more about them in my article on them. 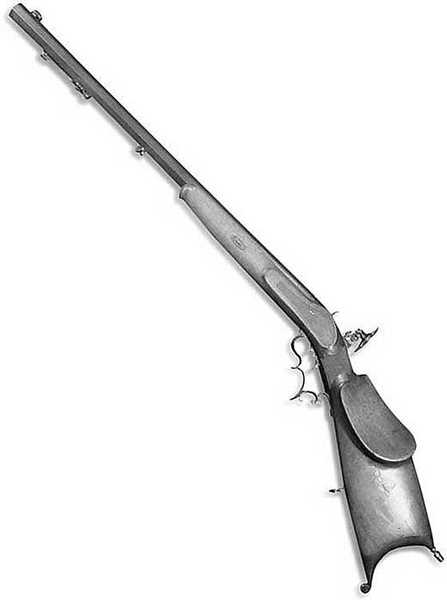 A zimmerstutzen like this one is a highly specialized target rifle.

What about cartridge primers?

You can’t stifle enthusiasm, so every few years someone “invents” a pellet gun that uses the primers from centerfire cartridges as the power source. And sometimes they use the larger number 209 primers that are intended for shotgun shells. Their “inventions” never work, because they are little more than bar-bet engineering, “Here, Rufus, see if this works!” I have tested some of these systems and found them lacking any redeeming qualities. But that doesn’t stop the next person from reinventing the same thing a few years later.

To summarize, most of the systems that use primers to propel pellets and BBs are useless and worse, they are dangerous. A few like the zimmerstutzen are highly specialized and do work, but even then they cannot compete with good quality target air rifles.

None of the guns in today’s report qualify as airguns. I wrote about them simply because they wind up being shoved into the airgun category by most people. I know you will encounter them sooner or later and I wanted you to know the score.

136 thoughts on “They overstepped the line!”