I’m writing today’s report for my brother-in-law, Bob. Bob has owned firearms all his adult life, but a little over a year ago he decided to find out about reloading. Reloading means making your own centerfire ammunition — rifle ammo in Bob’s case.

People reload for several reasons. Perhaps the most popular one is saving money. That’s the one most shooters think of when they contemplate getting into reloading. And it does save money on a per-shot basis. Instead of spending 72 cents a round for commercial ammo or 41 cents for military ammo, you can put the same cartridge together for 18-35 cents. That’s a huge savings! But is it? Or does it just prompt you to shoot more? Do you end up spending the same amount of money and even more because you manufacture the ammo yourself? I think you do — not that that’s such a bad thing!

But saving money is just one reason to reload. There are many other reasons that are even more attractive. The chance to achieve greater accuracy is one that I am attracted to.

I discovered early on that I could put together cartridges that were more accurate than anything I could buy. That sounds like bragging until you consider what commercial ammo is. Commercial ammo is loaded to work in all firearms chambered for that caliber. It has to be small enough to fit into every chamber from any gun manufacturer — chambers in guns made both now and guns made 80 years ago. Yes, there are specifications, but there is also a lot of tolerance within those specs, so all commercial ammo has to fit the lowest common denominator.

When I make a cartridge, I have no such constraints. I can form my cartridge cases to exactly fit the one exact chamber in which they will be fired. In fact, if I own two guns of the same caliber — two .22 Hornets, for instance — I might have to label the ammunition I make for one gun or the other, because they do not interchange.

The upside of that is some of my guns will put 10 rounds into half an inch at 100 yards, where factory ammo might only be good for 2 inches. Four weeks ago I watched a man put 5 cast lead bullets from a 32/40 single shot schuetzen rifle into one-half inch at 200 yards!

Speaking of money again, that man was paying about 5 cents per shot for his ammo. The primer cost him about 3 cents and the powder was another penny. The bullet was almost free since he cast it himself and didn’t have to pay for the lead, but I’m throwing in another penny to cover the bullet lube and other supplies. He was loading the cartridge right there on the range! The bullets were ones he had cast at home and prepared for this one gun. The 32/40 cartridge he was shooting is obsolete, and, for comparison, commercial ammo in this caliber costs $2 a round and more, when you can find it.

However, in doing all this the man was shooting a $3000 rifle that had a $1000 scope on top. He was also using another $700 worth of specialized tools to reload his rifle. This was his hobby and he spared no expense to do it his way. The cost savings on the ammo wasn’t really a factor.

When I started reloading as a teenager in California, I did it to save money — pure and simple. I could not afford the cost of the commercial .38 Special and .45 Colt ammo that I enjoyed shooting in my handguns. Then I got a job at Frontier Village amusement park and within a little more than a year I became the Deputy Marshall and relief outlaw. I owned a Great Western single action in .38 Special and there were no blanks available. So I made my own. For about a year I shot that Great Western (a California-made gun — not the Italian gun by the same name that’s made today) for nearly a year and reloaded all my own blanks.

I have made other odd ammo. Forty years ago when I wanted to shoot my Chinese-made Tokarev pistol, there was no ammo available. So I made it from .223 Remington cases, cut off and reformed in .30 Mauser pistol dies. You can buy 7.62 mm Tokarev ammo today because our nation is now trading with Russia, but as a reloader you can make almost any centerfire round you want. Don’t let that 11.3 mm 1871 Dutch Beaumont Vitali rifle with the perfect bore languish in your closet any longer!

So, Bob wanted to get into reloading. He began by trying to reload for his Colt-made AR-15. But he eventually faced the fact that it’s never going to be accurate. The best he can hope for is 3-inch groups at 100 yards. I have an AR-15 that will put 10 shots into slightly more than one-half inch at 100 yards. But Bob sees what I have to go through to get my rifle to do that (measuring case length, hand-weighing each charge of powder, single-loading the rifle because the cartridges are too long to fit in the magazine etc.). He wonders what is the point of having an AR if you can’t use it the was it was designed? And a lot of folks agree with him. 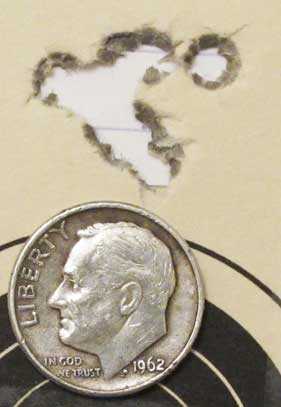 When you reload, you can get 10 .223 Remington shots from an AR-15 to go into a 0.534-inch group like this at 100 yards. You’ll never do this with factory ammo or even with military match ammo, but if you experiment you might be able to find a handload that will!

So Bob buys a 30-06 Remington 700. I think that is a good choice from an accuracy standpoint but a poor one from the standpoint of shooter satisfaction. After he gets it he starts reloading for it. He has to learn everything, because the whole subject of reloading is new. What’s the difference between a Berdan and a Boxer primer? How do military cases differ from commercial cases? What can’t he buy any bullet — as long as it is the correct caliber? What makes a box of bullets that sells for $32 better than a bargain box for $11?

We go through all of this over the next year and Bob learns. He learns, for instance, that while a 30-06 will kill any game animal found in North America, it also kicks very hard. He shoots about 40-60 shots each time he goes to the range, but he is not signed up for an elk hunt anytime soon. What I’m saying is — if he doesn’t need all that power, why suffer with all the recoil? He complains he gets bruises on his shoulder each time he goes to the range. I would, too, except that I load my 30-06 cartridges down to reduce the recoil — something else reloaders can do.

Bob is like the airgunners who want to jump into the hobby, so they buy the mostest powerfulest pellet rifle they can afford — for under $300. Then they suffer with the hard cocking effort and the harsh shooting cycle. A year later most of them quit airguns never to return, and they miss the really good parts that all of you know so well.

Earlier this year Edith and I decided to step in and show Bob a different way. I knew of a Mauser that had been rebarreled and chambered in 7.62×39 mm caliber — the AK-47 caliber. It has far less recoil than a 30-06 and uses less powder, so the cost to reload is less. It is nearly the same caliber as the 30-06 (0.310-diameter bullets instead of 0.308-diameter bullets). Best of all, I shot the rifle and knew it was dead-nuts accurate. And it was for sale. So, we bought it and gave it to Bob. It would be similar to giving a TX200 Mark III to someone who has been struggling with a cheap Chinese uber-magnum breakbarrel. 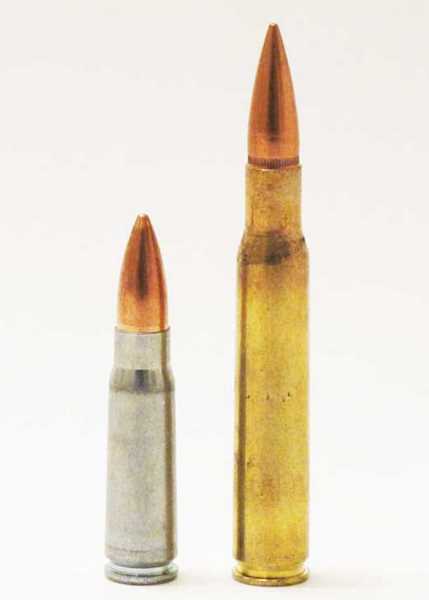 The 7.62X39 mm round on the left is the same .30 caliber as the 30-06 round on the right. But the recoil and cost to reload is much less. If you’re not hunting grizzly bears, maybe the smaller round is easier all around?

Bob’s world changed overnight! He saw that the Mauser with the smaller cartridge is far more accurate than his Remington, plus I gave him a load for it that is the best that’s been found for that particular rifle. He bought the dies for the caliber and started reloading. His past experience with both the AR and the Remington 700 makes him able to appreciate the Mauser far more. He even had a gunsmith install a Timney trigger to overcome the Mauser’s heavy military trigger.

The unexpected benefit of this experience is Bob is now reloading his 30-06 to lower levels — looking for accuracy and reduced recoil rather than the last foot-per-second he can get from it. And his groups with that rifle have gone from 20 rounds in 12 inches at 100 yards to 20 rounds in 3 inches at the same distance. That’s improvement, regardless of the size of the group.

Bob is now having a lot of fun. He tells me when he is reloading he is calm and almost in a trance. He is proud of the shiny cartridges he is able to make, and last week he told me for the first time that he has more confidence in his reloads than he has in factory ammo. And he has a heck of a lot more confidence in his own stuff than in military surplus ammo! He regrets when he has loaded all his shells because he looks forward to reloading so much! He finds himself looking forward to going to the range, just so he can empty a bunch of shells for reloading. A year ago, he wouldn’t have said any of this.

How does this relate to airgunners?

Here is how I think this relates. Airgunners may not reload cartridges, but those who sort pellets by head size with the Pelletgage are doing something very similar. Same for those who sort pellets by weight. Those who do both are doing what I do when I reload .223 Remington to put 10 into a half-inch. And the guy who fine-tunes his AirForce Talon SS over the chronograph is the fanatic! He gets far more enjoyment from his hobby than the guy who searches for pellets selling for under $7 a tin.

The guy who buys a 30-06 or a 7mm Remington Magnum to shoot at his local club is like the guy who buys the .25 caliber breakbarrel magnum springer. Both will quickly discover that those guns are not pleasant to shoot, and the ammunition costs a lot more than they bargained for.

If you are going moose hunting, by all means get a gun with enough oomph to do the job. But don’t base your purchase decision on the possibility that you might go moose hunting someday. If what you mostly do is shoot at paper targets at 100 yards, get something better-suited to that.

Likewise, if you mostly shoot airguns to clip dandelion stems in the back yard, let that drive your purchase decision. Spend your money on accuracy and comfort, rather than on bragging rights, because a gun that’s fun to shoot today will still be fun to shoot tomorrow. But a bragging rights gun looses some of its appeal with each person who sees it. At some point, you’ll run out of people to impress and then where will you be?