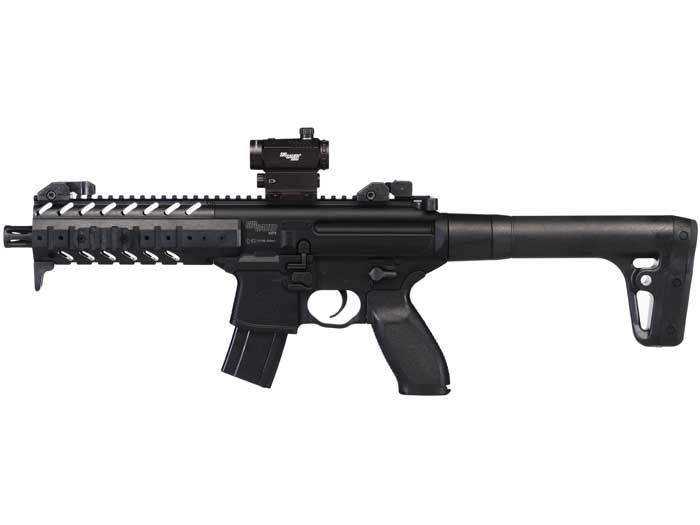 Today we begin looking at the MPX sub-machinegun from Sig Sauer. This is a different airgun, in that it is is being manufactured for, distributed by, promoted by and sold by Sig Sauer themselves. In other words, this airgun is one Sig is proud of — and in case you aren’t a firearm shooter, Sig is very proud of everything they make and sell.

I waited patiently for this gun. I know others beat me to the punch, but their enthusiasm may have caused some problems. A few guns were allowed to go out without the company’s stamp of approval. I watched as that happened and I waited until things were right. Sig tells me they are right now, so the airguns I will test for you are the ones Sig is proud to sell.

If you have never handled a firearm sub-machinegun, your first reaction will always be — wow, when you first pick one up! This thing is heavy! I remember thinking that about every M3 and M3A1 grease gun in my arms room in Germany, and again when I shot an H&K MP5. Well, get ready, folks, because the Sig MPX pellet gun is also heavy. When a 90-gram CO2 cartridge is installed and 20 pellets are loaded the gun weighs  7 lbs. 1 oz. Sig got it right.

There are 2 versions of the MP platform. The MPX I’m starting to test today is the sub machinegun configuration and sports . The longer MCX is a carbine version that carries . I will also test that airgun. But understand at their hearts both guns share a common powerplant.

{Note: Sig informs me that the MPX barrel is 8 inches long and the MCX barrel is 16 inches long. I was just quoting the numbers they give on page 5 of the owner’s manual.}

The gun is a 30-shot semiautomatic pellet gun with a rifled barrel. It operates on a 90-gram CO2 cartridge that sits inside the non-adjustable butt and should provide gas for many shots. naturally, we will find out just how many in Part 2, when we test velocity. Sig was kind enough to send me several of their gas cylinders, as well as a tin of their Match Ballistic Alloy pellets. So, somebody at Sig knows how to launch a product properly, and they have my thanks.

The length of pull is right on 13 inches. Subguns hold differently than rifles anyway. They are more like bullpups, and are meant to be fired from the hip in rapidly evolving situations, though the sights get used a lot more than you see in the movies.

Speaking of things done right, the CO2 cartridge screws into the gun’s receiver. That eliminates all problems of cartridge lengths from different manufacturers — something other guns have had difficulties with. 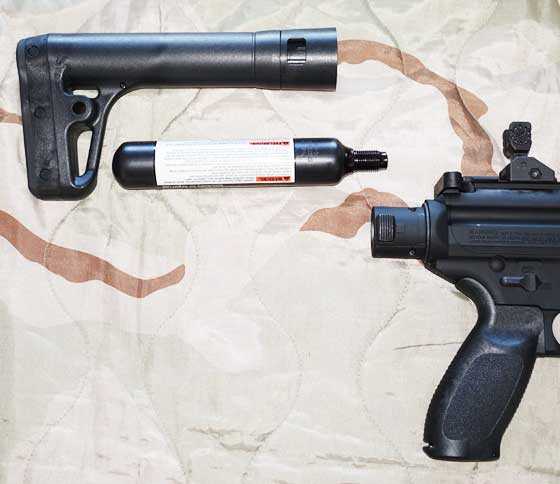 The MPX butt slips off and a 90-gram CO2 cartridge is screwed in place.

This is a quick aside. When I looked at those Match Ballistic Alloy pellets and saw their $35 pricetag, I realized they must be something special. They are priced right alongside the best from RWS, H&N and Qiang Yuan. So I’m not going to just burn them up in these two semiautos. I will also test them in a world class 10-meter target gun or two. If I could find a lead-free pellet that could hold its own with the best lead target pellets, whoever sells it would be on the happy side of success! That is one of airgunning’s most elusive Holy Grails.

Back to the gun

The MPX is semiautomatic only. Each time the trigger is pulled, the gun fires once. The safety, which is ambidextrous, selects either the fire mode or safe, and it does so with the thumb of your trigger-finger hand — like the M16. Yes, there was talk last year about full-auto guns and yes, there was talk of a precharged version of this gun or something similar, but as I mentioned, Sig has slowed down the launch to make certain that what goes out the door now is worthy of their name.

Perhaps those other models are in the works, but no one at the Sig booth shared that with me — nor would I expect them to. Too many SHOT Show reports show things that are prototypes and mockups that don’t even work (I have been very guilty of this), and that gets everyones’ expectations working overtime. In the Army we called it pumping sunshine (I won’t say where). Let’s concentrate on what actually is real, which is what I’m testing for you today.

Sig advertises a velocity of 600 f.p.s. and I have to believe that is obtained with the very alloy pellet I will be using. Expect lead pellets to go slower. But even so, we are still in a good range for a small airgun. Let’s hope the accuracy is also good

One thing I have a reputation for is holding the airguns I test to what seems to some manufactures to be an impossible standard of accuracy. As a former 10-meter pistol competitor, I like every pellet to go through the same hole. But with a sub machinegun, that’s not how it’s done.

A subgun can shoot accurately when the standard is minute of bad guy at close range. And a firearm subgun can also cut that guy in half if you stay on the trigger too long. The MPX is a semiauto only, so let’s settle for minute of bad guy. In other words, I may shoot off a bench to test this gun, but I do not expect this to be a bench gun. More on that when we come to the accuracy test.

Fortunately, Sig also did something about that, as well. They send me three different Sig action airgun targets to test. My favorite by far is what they call the Texas Star. When the small outlying paddles on this target are hit, they collapse and unbalance the star wheel that begins to spin on its own. More paddles dropped means faster spinning. If I can do it I plan to video this for you toward the end of this report.

The MPX has open sights — or perhaps I should say non-optical sights! They lie flat against the top of the receiver when you want to use the electronic dot sight that also comes with the airgun, but you know me — I just have to test them. And, get this you authenticity buffs — they adjust by inserting the tip of a sharp metal object in small holes around their periphery — exactly like the sights on an M16! I will use the nose of a 5.56 cartridge, but Sig has thoughtfully included a small spanner for those you you who are out on a remote fire base and haven’t been resupplied yet. 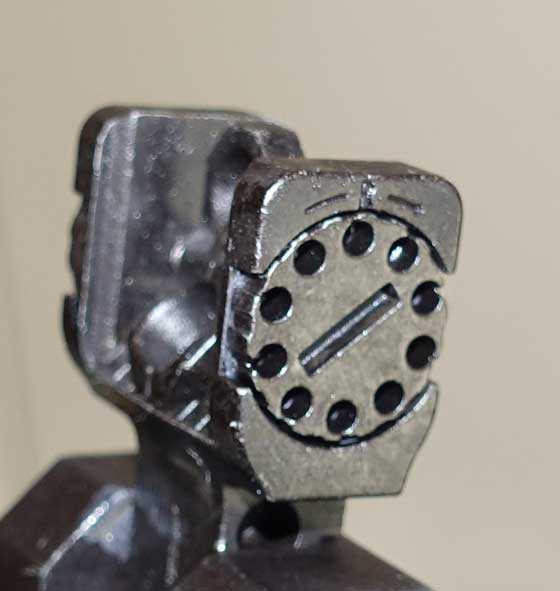 The rear peep sight flips up and adjusts like an M16 sight. The peep flips for a larger battlesight aperture. 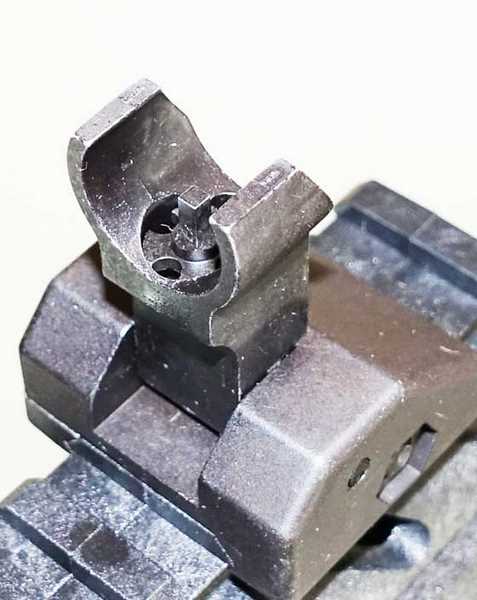 The front post sight adjusts like an M-16 sight. It can also lie flat against the top of the handguard. 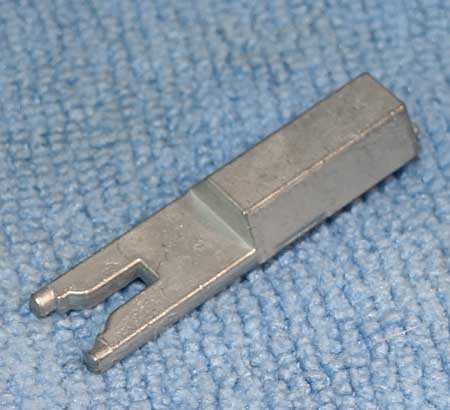 This spanner is included with the gun for those who don’t have a 5.56mm cartridge handy to adjust the sights.

Don’t worry — I plan to test the dot sight, too. And I will test both sights using the same test standard, so we get a feel for how they stack up. I’m thinking paper at 10 meters.

Okay, here is the interesting part. The MPX and MCX have a 30-round pellet magazine with the pellet chambers linked in a belt. They are in a racetrack that’s an internal part of the magazine and the loading instructions are very specific — SO READ THEM! I showed you that linked belt in the second SHOT Show report, but now it’s time to get specific.

I am familiar with this racetrack belted pellet chamber approach. Anics, the Russian airgun makers, used it in the Skif A3000 pistol. Unfortunately that pistol is so inaccurate and has such a hard trigger that I lost respect for this method of loading. So Sig’s top airgun engineer, Ed Schultz, showed me what he has done to improve it — and you had better pay attention, because the owner’s manual hasn’t caught up with what I am about to tell you. 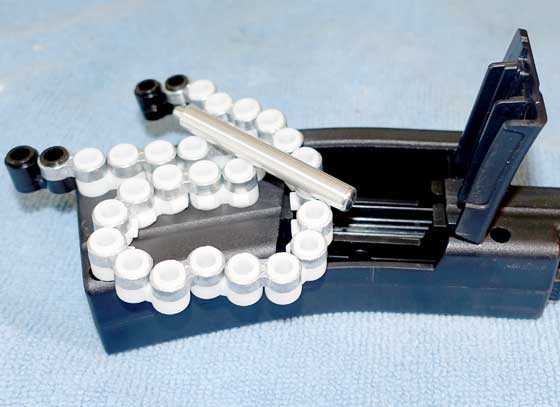 The belt must be loaded correctly and then inserted back into the racetrack magazine correctly. The owner’s manual is vague and confusing, so in the next report I will write new instructions and give clear pictures. The silver rod on top of the belt is a pellet loading tool to push each pellet deep into teach chamber. It comes with the gun but is not addressed in the manual.

The pellet cylinders are made of a combination of synthetic engineering plastic (Delrin?) and metal. Ed created a special tool to push each pellet deep into the part that’s inside the hard metal forward portion of the chamber. He did this to seat the pellet as close to the breech as possible. We will learn how well it works in Part 3.

I found the manual weak and vague on several important points. Loading the magazine is a big one. There needs to be more specific directions on how that is done, with better pictures and less vagueness over the orientation of both the magazine and the pellet belt. I plan to put those directions in Part 2, because I see this as a major point of misunderstanding about these guns. It will take a lot of writing, so I’m leaving the subject until then.

So far I like this airgun. It seems very robust and solid. And I like the open sights. I hope it continues to surprise us all in a very good way. 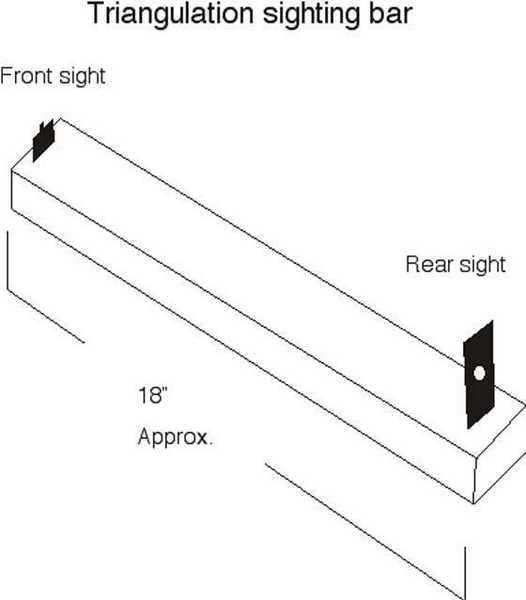 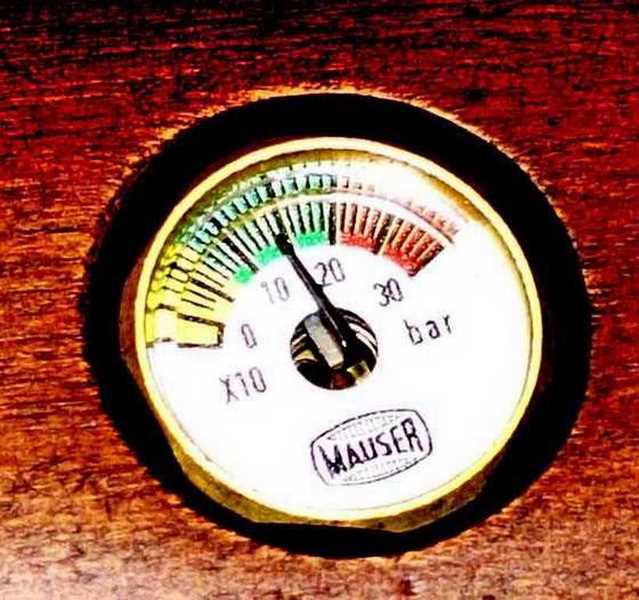