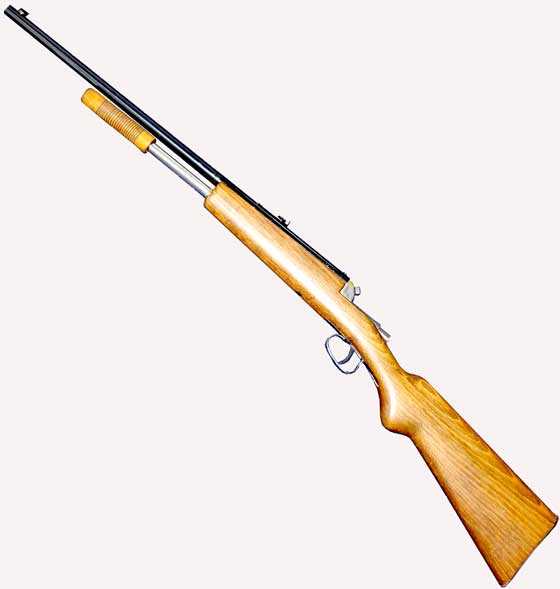 My Swedish Excellent CII rifle is a multi-pump pneumatic.

Today I present to you one of the most important reports I have ever written. It doesn’t turn out the way I imagined; it turns out far better! Please enjoy what I feel is the most significant work I have done in a very long time.

Today is accuracy day for the Swedish Excellent multi-pump pneumatic. In Part 2 we determined the velocity for both the Swedish Excellent round lead balls and also for some lead balls called Lobo from Argentina. The Swedish balls were about 100 f.p.s. faster than the Lobo brand balls, and we discovered that the Lobo balls are about one-thousandth of an inch larger than the Excellent balls. I think the size and perhaps even the uniformity of the ball sizes will play a big role in what happens today.

First to be tested were the Excellent brand lead balls made for the rifle. I shot at 10 meters off a bag rest. I pumped the rifle 8 times for each shot, which we learned in Part 2 gives an average velocity of around 335-340 f.p.s.

The first shot landed in the bullseye, close to the edge of the black at 6 o’clock. I left the sight setting the way it was and accepted the point of impact. Then I shot 9 more shots at the same target.

On shot number 4 something very strange happened. The shot sounded different and the flight time of the ball was so much slower than the first three that I could easily discern it. The ball landed about 2.5-inches below where the first 3 balls had struck. I was flabbergasted! Three balls in a very tight group and then this anomalous slow shot opens the group like this. What should I do?

I was prepared to shoot 11 shots and show the group of 10 that was very tight and just tell you about the one slow shot, but the final shot was another slow one. It hit higher on the paper than the fourth shot, but was still over an inch below the main group. It was this shot that convinced me something strange was happening.

Ten Excellent balls grouped in 2.778-inches. Two of those shots landed far below the main group of 8. The main group measures 0.374-inches between centers.

As I pondered what was causing those anomalous slow shots, I decided to shoot a group of the slightly larger Argentine Lobo lead balls. The first shot hit the bull below the point of impact of the Excellent balls, but close enough to it (within 0.25-inches) that I could tell the difference was due to a slower velocity. I figured I would just keep shooting and get a nice group that was a little lower than the first group.

Then I fired the second shot. As I loaded it I noticed that it fit in the breech snugly. This shot went noticeably slower than the first. The ball struck the target paper about 2 inches below the first shot. That was the end of trying to group with Lobo balls. Something major was happening and I needed to find out what it was!

These 2 Lobo balls landed in different places. The higher ball fed into the rifle breech easily. The lower ball was tight in the breech.

What do we know about the Swedish Excellent air rifle? First, we know that it is not rifled all the way down the barrel. In fact is is only rifled in the last few inches of the barrel by the muzzle. This is very similar to the rifling that is proprietary to FX today and sold under the name Smooth Twist. Next, we know that the Excellent rifle produces very low velocities. And they vary quite a bit. So it’s slow and not entirely stable.

This lead me to believe that the shot might not be that uniform in size. Fortunately, Jerry Cupples has provided a way of evaluating that. His .22 caliber PelletGage has holes from 5.46mm to 5.55mm in diameter. I wondered what I would find if I gaged the Excellent shot.

Well, size turned out to be the issue. I gaged 15 Excellent balls and got 4 groupings of balls that ranged from 5.47 to 5.51mm in diameter.

But that isn’t all. I also discovered the balls were not uniformly round. Sometimes they would be stopped by a gage hole that they could also fall through, depending on how they were rotated.

I decided to test just one size ball, to see if they would group tighter than balls chosen at random. I shot 5 balls that gaged 4.49mm in diameter. They all shot at the same velocity (as far as I could discern) and they landed in a group that measures 0.292-inches between centers. If you look at the photos you’ll see this is a much tighter group than we got before with random balls. 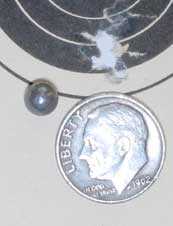 What could this mean?

The implications of this last group are enormous. If shot size is really as important as it seems, would shooting gaged pellets in a smoothbore rifle make a big difference? Would shooting sized BBs in an accurate BB gun be better than shooting random BBs pulled from the same package? Has this test shown the importance of sorting shot by size more than any other test I have run to date? The suggestion is, there is more testing to come.

What happened in today’s test is a golden example of serendipity — searching for one thing and discovering something different and wonderful on the way. Allow me to close today’s report by rewriting the end of one of the most famous poems ever written, “Casey at the Bat,” by Ernest Thayer in 1888.

Casey at the Bat

Casey at the bat is the charming story of a hometown baseball hero who often win for his team by sheer talent. Except on one fateful day, when he has the chance to win and fails. You can read the entire poem here.

The poem ends with Casey going down swinging, as portrayed by the final stanza.

Oh, somewhere in this favored land the sun is shining bright;
the band is playing somewhere, and somewhere hearts are light,
and somewhere men are laughing, and somewhere children shout;
but there is no joy in Mudville — mighty Casey has struck out.

Casey is a lesson in reality, summed up in one phrase –Don’t get cocky. Sometimes, though, good things do happen. Based on the today’s surprising turn of events, I have rewritten the final stanza of the poem as follows.

Somewhere in this blessed land the promise was revealed
the hope that once was tempered can no longer be concealed.
Mudville shines today; for their nine have met the call
And now the game has ended; mighty Casey cleared the wall!