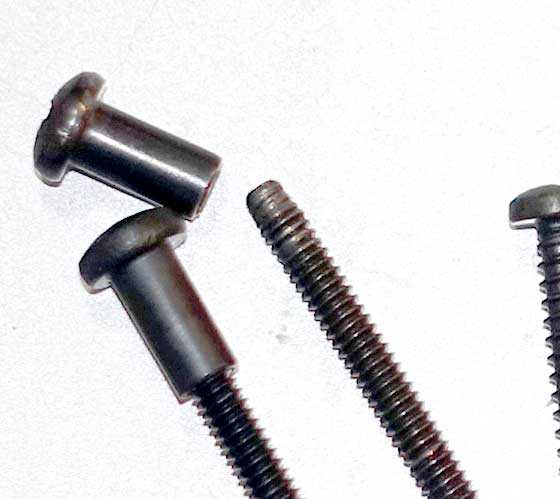 Before we begin I want to remind all of you about the Pyramyd Air Cup. It’s just about three months away! I plan to be there this year, so come out and say, “Hi” if you can.

I also want to remind you about the Texas Airgun Show that’s even closer. The tables are almost filled and most of the major manufaturers and importers will be there. Plus, American Airgunner will be there all day.

Yes, sports fans, we’re back with the Daisy 853 today. Here’s what I learned from all of you after the last report. I learned that many of you consider the 853 to be tricky to work on, as I reported. It’s not because of complexity; it’s because of the method of construction. This rifle is held together by its parts in ways that make assembly a challenge. I suppose you do get better at it after working on many guns, but there are a lot of little tricks I don’t yet know, so I find it challenging.

A couple of you emailed me offline to tell me that your rifles are performing like mine or worse after a pump rebuild. One guy mentioned seeing air leak at the breech from each shot, which leads me to suspect the bolt. I mentioned that in Part 3, because mine appeared to be chewed up. Today I plan to replace the bolt in my rifle. I’ll show you both the old and new bolts side by side so you can decide whether I’m right in my suspicions.

One reader mentioned in the comments that some clubs require the guns to be stored with the bolts open. That’s going to put a strain on the hammer spring, and since that spring is made from small-gauge wire, it could weaken over time. That would definitely result in lower velocity.

A reader mentioned that when he switched from silicone chamber oil to Crosman Pellgunoil to oil the pump head his rifle gained 15-20 f.p.s. I lubed the o-ring with silicone after the rebuild, so the first thing I will do today is re-oil the pump head with Pellgunoil, which contains 20-weight motor oil.

Finally, a reader commented that perhaps his aluminum pump tube was degraded, though he couldn’t see any evidence of it. I have the same situation. My pump tube appears perfect. But if today’s fixes don’t bump up the velocity of a light pellet, I may install a new tube.

First I shot 10 RWS Hobby pellets with the gun as it was. That was with silicone chamber oil on the o-rings and the felt wiper. It averaged 454 f.p.s. with Hobbys. That’s a trifle faster than the last velocity test, but still very close.

Then I oiled the pump head and wiper with Crosman Pellgunoil very liberally and tried again. This time the Hobby averaged 458 f.p.s. That’s too close to call. I don’t think there is much of a difference. Now it was time to disassemble the rifle and replace some parts.

I finally had to break the right side plastic stock spacer to get the barreled action out of the stock. So I won’t be able to install it in the stock until I get new spacers from Daisy. On examination, the threads on the tip of the old stock screw are pretty messed up, which is why I had the problem.

The old stock screw (right) is stripped at the end. On the left is the new stock screw, shown threaded into the hollow screw from the right side of the gun.

The rear stock screw will also be replaced when I put the rifle together again. Instead of a clumsy 2-screw arrangement, Daisy simplified everything with a longer rear stock screw. 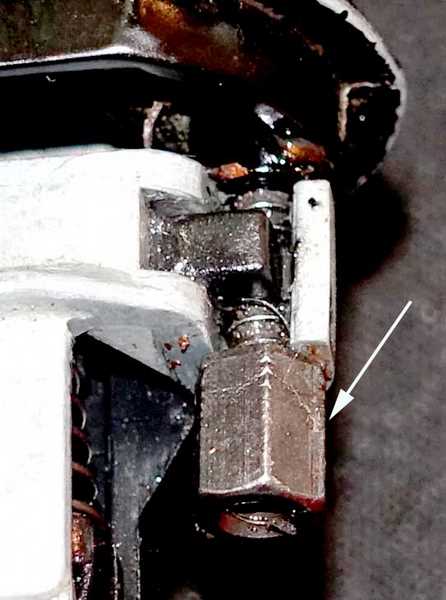 The old stock screw system was 2 screws. One screwed into the action and provided a boss (arrow) for the second screw to attach to. 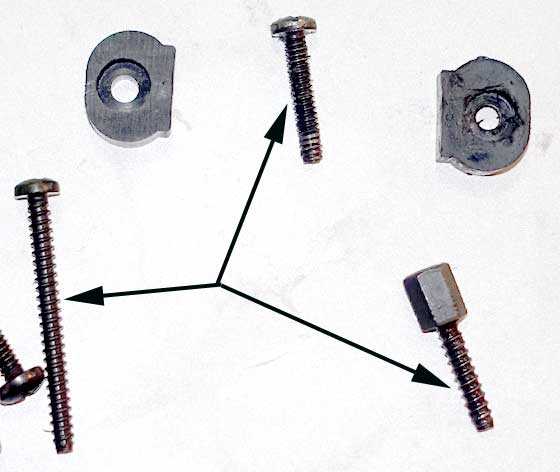 /a>
The two screws on the right were replaced by the single screw on the left. Much simpler!

Once the barreled action was free of the stock I disassembled it. It went much faster this time, until I came to the actual action. I needed to replace the hammer spring and the bolt, so the sideplate had to be removed from the action. If this photo below of the inside of the action doesn’t discourage you from working on an 853, you are probably good to go. 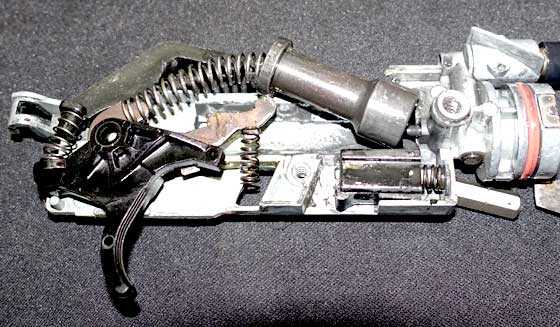 The inside of the action looks daunting at first. Take that to heart before undertaking this job!

I replaced the hammer spring, though it didn’t seem much different than the new spring. I used the existing hammer because someone had lubed it with moly and it is a part that doesn’t wear out.

The new hammer spring (top) looks about the same as the old one. I replaced it anyway.

I also replaced the bolt, because the old one had a number of nicks on the probe that I thought might leak air. 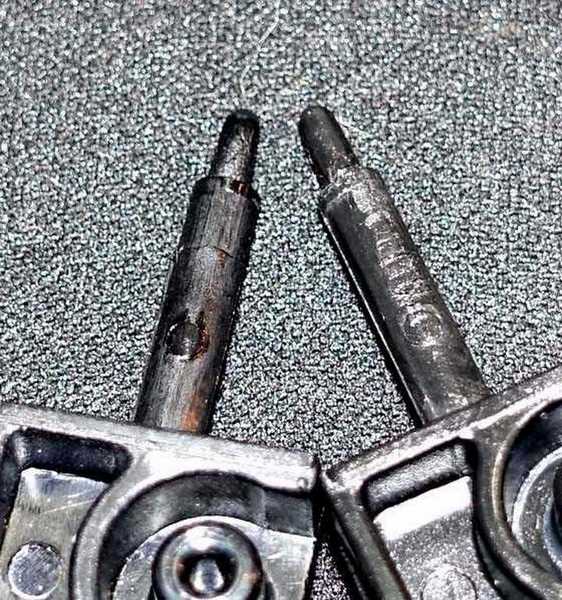 The old bolt probe (right) has several nicks that I feared might allow air to escape. I replaced it.

Assembly went much faster than before because I knew some of the tricks. Getting the action side plate back on all those parts and springs took some doing. I probably spent 15 minutes just doing that. Then things went together quickly.

I found that I had to cock the hammer to get the new bolt installed. Daisy doesn’t mention that in their instructions.

The other trick they do tell you about is to use a mallet to strike the top of the receiver (what they call the cover) to seat it. It works, but the first time you do it you will be concerned. This time I was ready for it and got it on the first try.

Then the pump arm was assembled to the action and the rifle was as far along as I could go. I need to order some new stock spacers, plus I had to glue a large chip of wood that removal of the right-side screw blasted out.

The rifle is not together yet, but I did want to see what these parts had done, so I managed to shoot a few shots out of the stock. The average hovered around 450 f.p.s. with Hobbys, so nothing has changed.

Next I plan to assemble the rifle and then test it for accuracy. I will use it at the current power level, which is stable, if not as high as I hoped.

In the future I may return and replace the pump tube and piston — just to see if they have any affect on velocity. Then I hope to modify the trigger for a lighter pull. There is a lot more to come!