Home > Blog > PCP > Always Something else

One thing has stood out about airgunners for me. No matter what you are talking about, they always seem to want something else — something different. I remember many years ago when powerful precharged guns didn’t exist, the Yewah 3B Dynamite multi pump from Korea was looked at as a big deal. It was powerful, large caliber (.25) and airgunners were in awe of it — mainly because few of them had ever seen one.

Then I read about a guy who had one and reported how very powerful it was, but, man, was it ever hard to pump! The 3B required 150 pump strokes to fill initially, and then you could top it off after every shot with another 20 pumps. This fellow liked the power but hated all the work. So he machined a fill coupling and turned his 3B into a precharged airgun! He said the gun became lighter when the pump mechanism was removed, and it was no longer a chore to fill.

Several years later there was a huge cry to put a pump mechanism on a PCP. The proponents of that move said you would have all the accuracy of a precharged pneumatic, but no longer be tethered to a scuba tank. I was one of the ones who said that and was fortunate enough to purchase a used Daystate Sportsman Mark II, which was a modernized Titan multi pump. Five pump strokes took that .22 rifle up over 25 foot-pounds, and with as few as three pumps you still got over 15 foot-pounds.

That Sportsman was accurate, beautiful, had a great trigger and was all things people said they wanted, except for the pump mechanism. It was heavy, unbalanced the rifle to the right side and the final two pump strokes required 77 pounds of effort, each. That rifle was a scarce one because it cost about the same as a PCP. If there had been more of them I’m sure someone would have removed the pump mechanism and converted it to a PCP. He then would have touted all of the advantages such a conversion brought!

Today we have the FX Independence, which gives us the best of both worlds — precharged and multi-pump. It’s expensive, but it does exist.

I remember the Farco air shotgun. It was .51 caliber, or 28 gauge. And it operated on CO2. Because it was made in the Philippines, the temperature/pressure fluctuation with CO2 was not considered a problem. But what did American airgunners want? They wanted to shoot a round ball from the gun, and Farco importer Davis Schwesinger, the owner of Air Rifle Specialists in New York, killed a wild pig in Florida with his Farco shooting such a ball.

Then I published the velocity of the ball from a Farco in The Airgun Letter. As I remember, it was around .45 caliber in a shotgun shot cup and exited the muzzle at around 500 f.p.s. Golly gee but that was too slow. So guys started converting their Farcos to operate on high-pressure air. As long as they didn’t fill to more than 1,200 psi, the CO2 valve could still deal with the pressure and the better flow of the thinner high pressure air did increase the velocity. But it wasn’t enough. Someone converted his Farco to run on air at 3,000 psi. That is dangerous, because the Farco is made of soldered brass. In essence that turns the shotgun into a large pipe bomb!

You know, the funny thing about fringe experiments like this is the guy doing them always says there is no problem. And there isn’t — until there is. There are a number of tragic You Tube videos with similar circumstances.

So, let’s say I report on a spring-piston air rifle that I find delightful to shoot. Let’s call it a Diana model 27. Many guys read my report and get stuck when I report the muzzle velocity of 475 f.p.s. That’s too slow! What can be done to increase that to 700 f.p.s.? Well, things can be done, but when you get there that rifle won’t be a Diana 27 any longer.

In 1870 the U.S. Army was in the middle of developing a new rifle for soldiers. After the Civil War the government had a million .58-caliber muskets they wanted to modernize, rather than scrap and start all over. So they started a program at the Springfield Arsenal to convert the 1863 musket into a breechloading rifle. They went through models 1865, 1866, 1868, 1869, 1870 and finally ended at model 1873. During this same development period the cartridges went from .58 caliber rimfire (closest to the original musket) .50 caliber rimfire, .50 caliber centerfire (the famed .50/70 cartridge) and finally ended at .45/70. By the time the development was finished, only a few common parts like the sling swivels could be reused.

Despite all the “wisdom” at the start of the project, the smaller caliber with a lighter bullet shot farther, dropped less and hit harder at distance.

Let’s talk about distance for a moment. In June of 1874, at the Second Battle of Adobe Walls, buffalo hunter Billy Dixon shot and killed an Indian medicine man/chief at 1,538 yards. It took 11 shots for him to connect with his .50/90 Sharps, but the Indian, Esa-tai, sat still on his horse because he had told his men that they and their horses were painted with invisible paint. The white men couldn’t see them. He was in the unfortunate position of having to put his mouth where his money was!

In the early 1990s Army physicists said it was impossible for a blackpowder bullet that left the muzzle at 1,250 f.p.s. to carry that far, so they were challenged by a group of modern buffalo hunters to test it. With millimeter-wave radar they were able to track the trajectory of the bullets of a number of buffalo guns and determine that, not only was the Billy Dixon shot possible, it was well within the range of such a gun. Dixon’s rifle could shoot past 2,500 yards, and the venerable .45/70 bullet will pass 3,000!

My point is this. When you shoot a pellet, you don’t need a flatter trajectory. You need more accuracy. Your 500 f.p.s. pellet rifle can easily hit targets at 100 yards and farther. The question is — can you?

It’s okay to want something different. That’s how progress happens. But when you do want such a thing, make sure you really want it and aren’t just kicking over rocks to see what’s underneath. 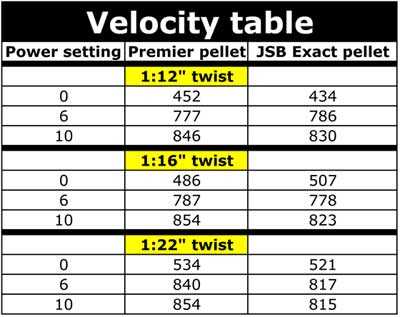