Today we begin looking at a variation of a multi-pump pneumatic rifle we have seen before. And when I say we’ve seen it, we have never seen this particular variation. What we have looked at its sibling, the .22-caliber Crosman 101. Both rifles got their start with the Crosman model of 1924, which was a .22-caliber multi-pump that came to market in — you guessed it — 1924!

The model 100 is simply the .177 caliber variation of the 101. It is scarce because during the time when it was manufactured, .177 was not a popular caliber in the United States. The larger .22 sold many times as many guns — probably for all the reasons you have discussed on this blog.

I first saw this rifle on the table behind me at this year’s Texas Airgun Show. I was more interested in the Crosman 102 repeating multi-pump sitting next to it, but once I read the tag and discovered this was a model 100, my interest spiked.

Long story short, neither gun sold at the show, so I bought them both. The 102 had a leaking issue, so I waited until the owner could fix it. I am starting with the model 100 first, because reader RidgeRunner expressed an interest in the model. Like most airgunners who have been to at least one airgun show, he has seen lots of 101s and he knows how scarce the 100 is.

While the model 101 .22 caliber rifle started production in 1925, it wasn’t until 1940 that Crosman added the .177 caliber model 100 rifle to the line. Throughout the years of this rifle’s run (1940-1950), the Crosman Corporation didn’t appear overly fond of the .177 caliber. They offered their airguns in that caliber to satisfy a growing demand that may have been created when military personnel returned from World War II. They had seen the small .177 or 4.5mm caliber in Europe and decided that was what they wanted. But American airgunners who hadn’t been to war would still be wed to the .22 for another 15 years.

Production of the 100 ended in 1950. It’s impossible to know for certain how many were made but I have seen about 100 Crosman 101s for every 100 I’ve seen. Since they are identical except for the caliber there may have been some that escaped my notice, but they are scarce!

This is not my first 100. Years ago when I was still living in Maryland and writing The Airgun Letter I had one. I remember it shooting faster than the .22 but that’s about all I can recall. At some point I sold it or traded it for something else. Oddly, though, I did keep the model 101 from those days, which is the same rifle I used for the report I linked to, above.

This rifle was resealed and refinished by the former owner, Jeff Cloud. You may recall that he also resealed my Sheridan Blue Streak last year. That job turned out beautifully, so I knew this one would be good. Jeff also refinished the rifle. The Crosman 100/101 series rifles are very popular with refinishers because they are so simple and straightforward to work on. The metal was originally painted at the factory, so you are doing nothing wrong when you sand and repaint it.

The wood can be any variety of hardwood, from walnut, though maple, beech and gum. I think this one is either beech or gum. There are several different stock profiles — high comb, low comb, etc. — that Crosman collectors obsess over. There are even some factory stocks with a checkered pistol grip.

Rifles made during the 1940s often have hard rubber pump handles with a soft rubber bumper inside to keep them from clicking against the pump tube when the handle is closed. These models were sold as “clickless” guns, the idea being they didn’t make noise when they were pumped. But if the rifle is in good tune the handle doesn’t have to click even without the bumper. This one doesn’t.

Both the 101 and the 100 were called the Silent model from around the 1930s to the end of their run. That referred to the quiet discharge sound, compared to a .22 rimfire. Crosman also used the slogan “Power Without Powder” for much of the production run. The model number crept in much later, probably to help keep the parts organized (the parts peculiar to a specific model often have the model number incorporated into the part number).

This is a single shot bolt action multi-pump pneumatic air rifle. My example weighs exactly 5-1/2 pounds. Overall length is 35 inches with a 20-inch barrel, so this is a smaller air rifle. Length of pull on my rifle is 13-1/5 inches, so it feels comfortable, but a little small.

The rifle is all metal and wood, except for the rubber pump handles found on some rifles, as noted above. The metal is steel in many cases and cast aluminum in other cases like the receiver. The model 100s almost all have bronze barrels that were rifled by Crosman. They started rifling their own barrels around 1948 and bronze was far easier to rifle than steel. It also resists corrosion from the rapidly decompressing air when the gun fires. A few steel barrels are encountered on rifles of the late 1940s, but the norm is bronze. Bronze barrels are always painted; steel barrels are blued.

In the beginning Crosman set a maximum pump limit of 6 pumps and they didn’t specify a minimum. As time passed their literature began to say that more than 6 pumps were okay if you really needed the power, but six were still the recommended maximum. I typically stop at 8 stokes when I’m going for power — the upper limit set by Sheridan.

You must cock the gun before starting to pump. If you don’t, all the air will be exhausted on each pump stroke, because the heavy spring-loaded striker presses against the firing valve, holding it open when the gun is at rest. That raises the question of how you leave the gun stored with a pump of air inside — which has been recommended by Crosman since the 1920s! The answer is to pump in one or two pumps (I put in two), then hold the cocking knob and pull the trigger. You can lower the striker slowly this way and the gun will remain sealed, but most owners do one additional thing. They unscrew the cocking knob until all tension is off the firing valve, ensuring the gun will remain sealed. A gun that’s properly sealed will hold air for many months this way. 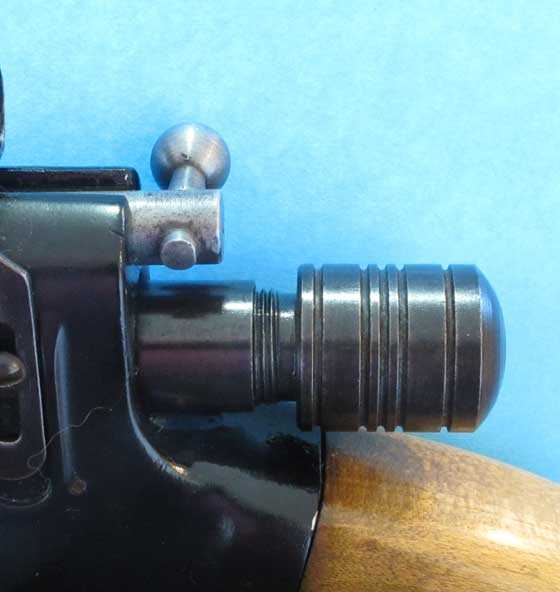 When the rifle is stored it gets two pumps of air and the cocking knob is unscrewed.

The rifle has a turnbolt, but it doesn’t cock the striker. It’s simply there for loading and for sealing the breech. There are no seals or o-rings on this bolt. The breech is sealed by the fit of the bolt face against the rear of the breech. A half pin on the side of the bolt engages the receiver when the bolt is closed, pushing the bolt forward to make this seal airtight. 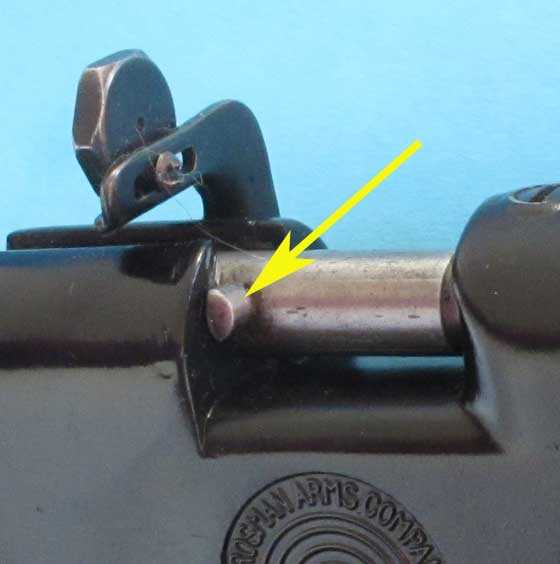 That half pin (arrow) pushes against the face of the receiver which pushes the bolt face forward to seal the breech. 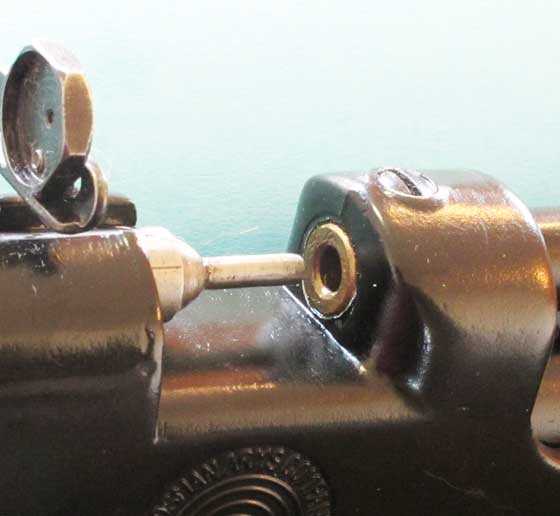 The pin pushes the tapered face of the bolt into the bevel at the breech of the barrel, sealing it perfectly.

The sights on the 100 and 101 are one of the things that delight shooters. They are a squared-off post in front and an adjustable peep in the rear. The peep adjusts up and down and side to side on slots. Both adjustments use locking screws to hold the sight in place. You lose the precision of positive click detents but save the considerable expense and complexity of their design. 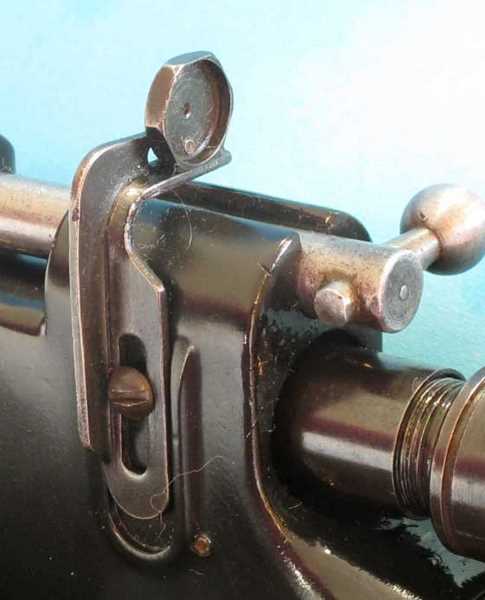 Here you see the details of how the rear sight adjusts.

I used the Blue Book of Airguns to research this report, but I didn’t stop there. Many years ago Dean Fletcher (D.T. Fletcher) published a series of books about Crosman and Benjamin airguns. I used two of them, The Crosman Rifle 1923-1950 and 75 Years of Crosman Airguns to discover some little-known facts, like the 6-pump recommendation and always storing the gun with compressed air.

I will treat this report like any other, with velocity coming next, followed by accuracy. If you have anything else you would like to know about, now is the time to tell me. And, don’t forget, there is a 102 repeater coming, also! 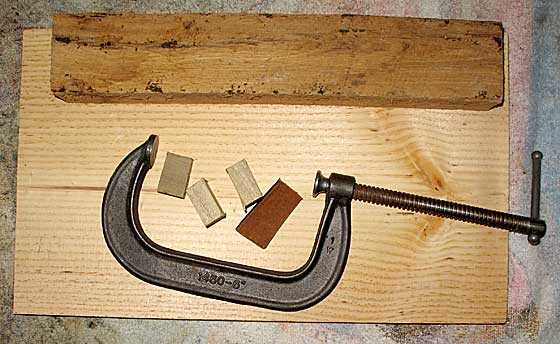 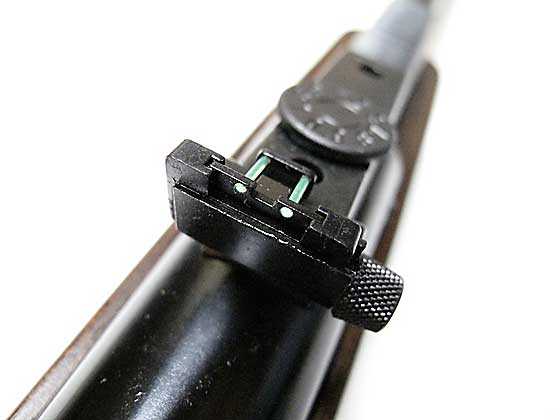 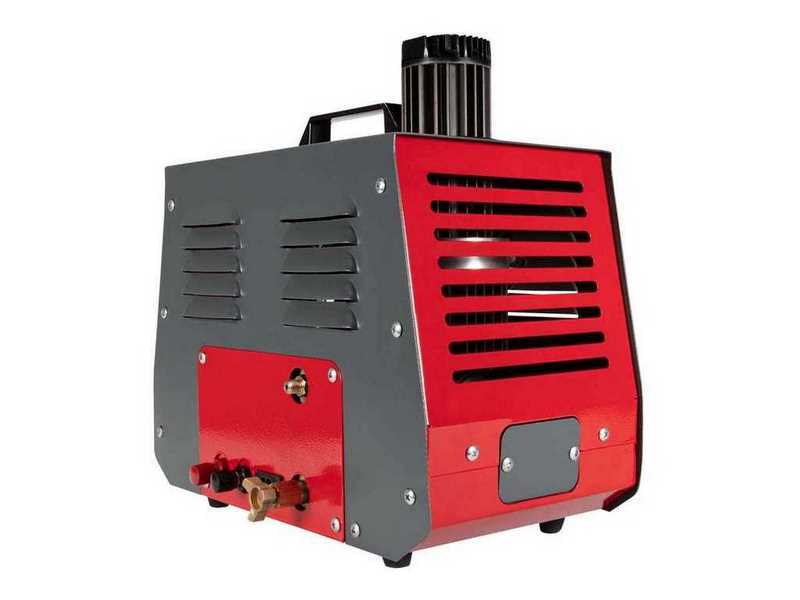