Today I will test the velocity and power of the new Hatsan Hercules .45 caliber big bore air rifle. Because this is a big bore, I have to take it to a range to test the velocity. No shooting big bores inside my office!

I actually had the rifle out for testing a couple weeks ago, but at that time I was unable to load any of the bullets Hatsan provided into one of the 7-round circular magazines. That ended that test. I was actually testing three other things that day, so I didn’t spend any time looking into the problem, but after talking to Hatsan about it online I tried the other magazine that came with the rifle and it worked fine. Apparently I just got one bad magazine.

I took a picture of me holding the Hercules while I was out the first time because several people asked about the relative size of the 13-lb. rifle. I told you the weight last time but didn’t have a way of showing the size. I hope this helps. 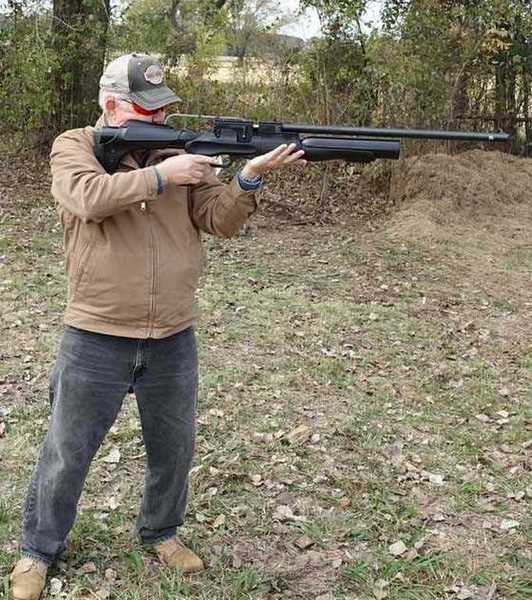 This picture shows the relative size of the Hercules. I am 5’11”.

The other 7-round circular magazine works fine. The bullets press in tight, but smooth. They go in on the side of the magazine that has a short projection in its center. That is the back of the mag. 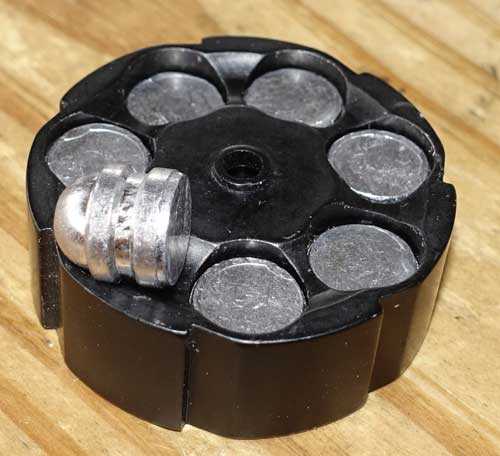 Once I found the mag that accepted the Hatsan bullets, loading went well.

I do have a complaint about the fill port that’s located on the right side of the rifle. It is covered by a spring-loaded shutter to keep dirt out. That’s good, but the shutter is under so much tension that I was not able to open it to insert the fill probe. I had to use a pocket knife to pry back the shutter to insert the probe. When I wanted to remove the probe I had to pry the shutter back again with my knife, or it would snap into an o-ring groove (shown in the picture) and stay there until I pried it back with my knife. 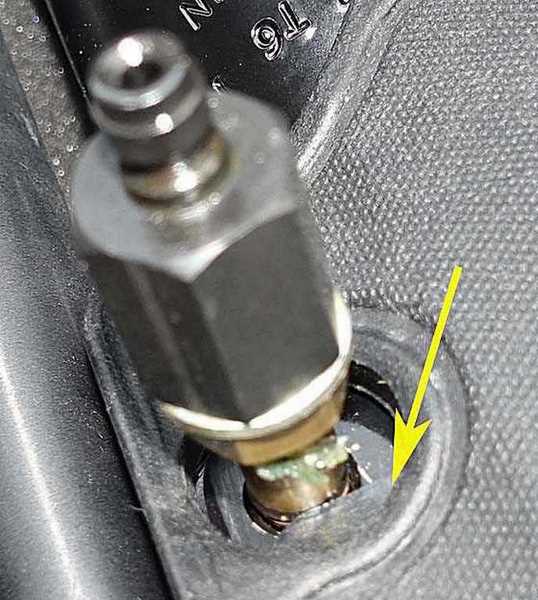 The fill port is covered by a spring-loaded shutter (arrow) that has to be pried open to insert the probe. When you remove the probe the shutter snaps into the o-ring grooves until it is pried back.

You may recall that the Hercules gets filled to 250 bar (3,626 psi) and holds 1,000 cc of air, so there are plenty of shots available. In fact, I believe it holds the record for the most shots on one fill of all big bore air rifles. I was not able to test the total number of shots on one fill because Hatsan sent me just one box of bullets (45 bullets in a box), but I did get a good idea of the power curve that will help us determine how many shots pretty close.

The first string I shot was with Hatsan bullets. You will recall from Part 1 that they weigh 169 grains and are sized 0.454-inches in diameter. The magazine holds 7 rounds, but I had several that didn’t register through the chronograph, so I ended up with an 8-shot string from the results of two 7-shot strings. I refilled the rifle after each magazine in today’s test, but discovered that it was still holding 2,800 psi after 7 shots, so there were probably another 7 shots on each fill — at least. However, the velocities I am reporting are all from the first 7 shots after the fill.

The start screen of the chronograph had to be placed 8 feet from the muzzle. The blast of air that was condensing to vapor at the muzzle was setting off the start screen when I tried to shoot any closer.

The Hercules is a sidelever. The lever is located on the right side of the action and comfortably far forward. It takes a good amount of effort to cock the rifle. I tested this on my bathroom scale and got between 60 and 65 lbs. of effort required to cock the gun. The scale needle bounced around too much to be more accurate than that. I know it is over 60 lbs. for certain. Cocking also advances the magazine, which happens near the end of the stroke and feels like the hardest part of the cocking stroke.

I also noticed this hard cocking when I shot the Hercules at the Texas Airgun Show this year. At the time I thought I was fighting a powerful striker spring, but now I think it’s the mechanism that advances the circular mag. I also think it will break in to some extent as the rifle is used, so a couple pound reduction may be possible. 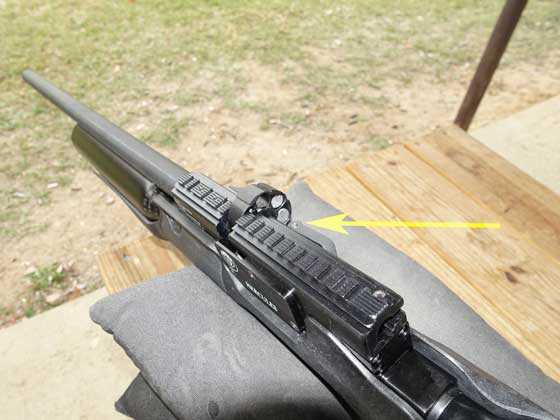 The 7-shot magazine sticks out to the right. Rotation is clockwise from the shooter’s perspective. The arrow points to the front of the cocking lever.

Two-hundred plus foot-pounds is sufficient for larger small game like coyotes and javalinas. As long as the accuracy is there I think the Hercules would work well. It will also drop a feral hog, but I would have a large-caliber sidearm for backup, just in case. Feral pigs can be nasty!

If you are going to shoot a .45 Hercules you are going to want to shoot it a lot. Let’s face it — there aren’t many repeating big bores on the market and none that hold 7 rounds. Those Hatsan bullets are a bit pricy, at over $30 for a quantity of 45 (not sold by Pyramyd Air). Pyramyd Air has a .45-caliber semi-wadcutter that weighs 166 grains and looks similar to the Hatsan bullet. These are ten dollars less for 50 bullets, but they are sized to 0.457-inches and I don’t know if they will fit. However, you really want to go crazy, the Cowboy Action Shooters (CAS) bullet makers have several similar bullets that sell for under $50 for 500.

I happened to have a small supply of CAS bullets on hand. They are sized 0.4525-inches, so no telling how accurate they are (until I test them), but I wanted to see what the velocity is. I have even fewer of these bullets, so the test was limited to just 7 rounds, of which 5 registered on the chronograph. You may wonder why I can’t hit the skyscreens, but the Hercules has no sights, so I’m hipshooting it through the chronograph skyscreens. 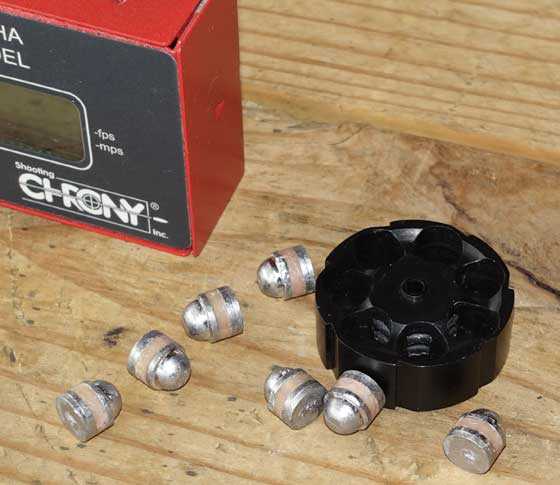 Except for the lubrication and the slightly different size, these Cowboy Action Shooting bullets are identical to the Hatsan bullets.

I said you get a lot of shots on one fill of the Hercules, and indeed you do. Just remember — every time you fill this rifle its reservoir holds 1,000 cc of air! By the end of this test — just 21 shots — my 98 cubic foot carbon fiber tank had dropped from full to 3,500 psi. Plan on using a lot of air!

To offset the heavy cocking, the Hercules has a fairly light and crisp single-stage trigger. I measured the break at 6 lbs. But I was restraining the cocking lever with my other hand to not discharge air while measuring it, so it’s probably lighter.

The Hatsan Hercules is a unique big bore air rifle — that’s for sure! It’s large and heavy, but it’s also a 7-shot repeater. I don’t like the shutter over the fill port, but the trigger is quite nice.

I will be very curious to see how we do in the accuracy test. At the Texas show I fired a magazine’s worth of shots and was connecting at 100 yards, but the targets were large silhouettes. I am excited to see just how accurate it is when I have the rifle all to myself.