Here we go! Today is the day we find out the health of that rusty old B3 underlever I found in a local pawn shop several weeks ago.

I’ll start with a description of the condition of the rifle. It’s rusty all over and looks like every Chinese B3 I ever saw. When the rifle is cocked and the sliding compression chamber is pulled back, you can see the breech seal. On this rifle, it looks bad, actually destroyed. So the velocity testing that we’re doing today will be very interesting. 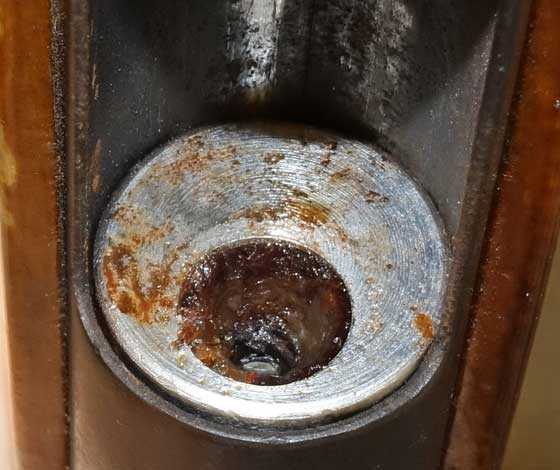 The breech seal is toast! 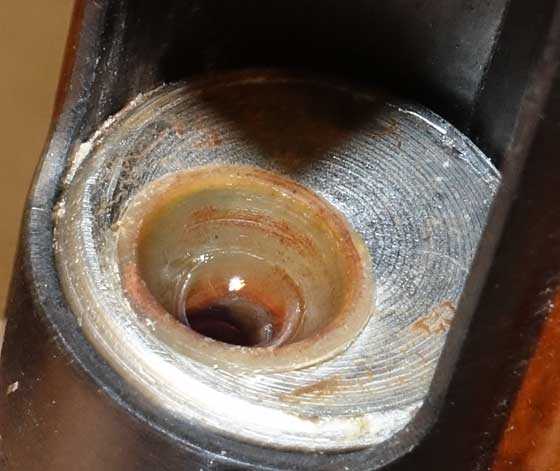 This is what a B3 breech seal should look like.

Let’s see what this old girl can do. Compasseco used to advertise these as shooting over 800 f.p.s. I put some oil in mine last time and shot it through the chronograph before and after for you. Before, it shot an RWS Hobby pellet at 370 f.p.s. After 10 drops of Crosman Pellgunoil it shot 609 f.p.s. I figured that was about what the rifle should be doing, so I reckoned it was back to full power. That was a mistake, and we are going to have some fun because of it.

Here is a string I shot with RWS Hobby pellets.

I don’t need to test any farther. Clearly the velocity is falling off and I don’t think any further testing will see an improvement. When I saw the first two shots I thought the rifle needed to “wake up”. If I had been right, shot 3 would have been in the 600s, but as you see, it wasn’t. And the velocity tapers off from there. I think it’s clear this old girl is sick.

Normally, this is where I would grit my teeth and work up the courage to take this gun apart. I have disassembled a TS45 sidelever, but I’ve never been inside a B3. However, I thought it would be fun just once to not do the usual thing. After all, this is a B3, and I already have a B3-1 that I bought new, so I can play with this one if I want to.

[The following text is for information only. Pyramyd Air does not recommend making unauthorized repairs to airguns, and owners should know these are both unsafe and will void any warranty.]

That is the warning from Pyramyd Air. Now, I will add my own warning. The B3 rifle has a reputation for slipping off the sear and injuring people when the sliding compression chamber snaps shut. What I am about to do will be done with safety at the forefront. This is NOT something I can recommend to anyone, and it is NOT the correct way to repair this air rifle!

What would you do?

What I did was search the internet for B3 seals. Instead of finding them, I found an excellent short video on You Tube about a guy who used a faucet washer to replace his B3 seal. I think one or more readers actually mentioned this video to me in the last report.

In the video, his rifle was the same model as mine and the condition of his breech seal was the same. He says he dug it out with a screwdriver! No disassembly of the rifle is required. After considering that a few minutes, I got out my screwdriver and went to town.

The old seal in my rifle had hardened into a solid mass of varnish. When I picked at it, it crumbled into small pieces. Since the sliding compression chamber was all the way back against the piston while I did this, the piston seal closed off the other end of the air transfer port (inside the chamber), and very little of the bad stuff could find its way through the transfer port and into the compression chamber. 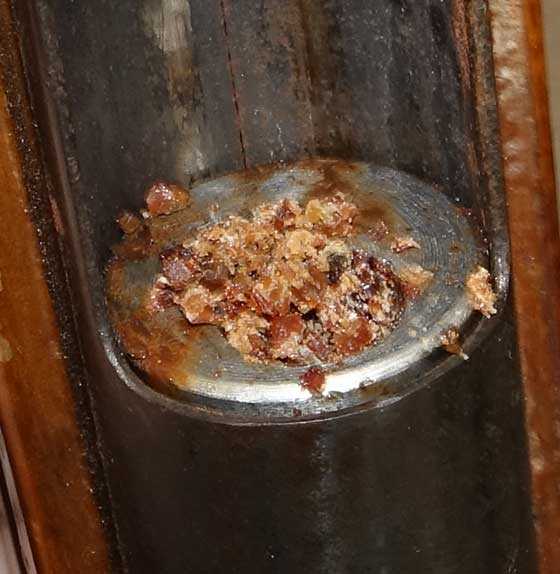 It took me about 15 minutes of careful digging with a screwdriver and a makeshift dental pick (one I made — not a real one) to remove most of the stuff in the cavity where the breech seal goes. 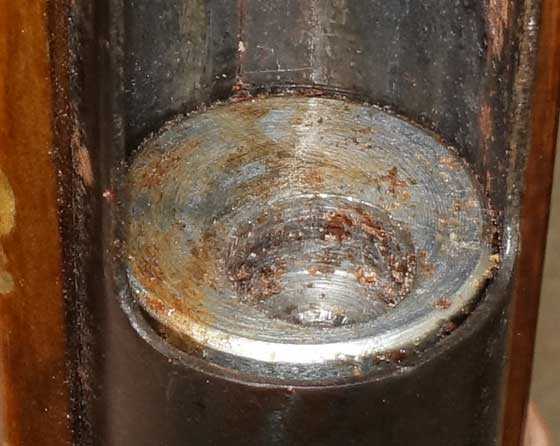 Here is the breech seal cavity with the seal mostly gone. I need to clean this more, but this was done in just 15 minutes.

When I finished I had to shoot the rifle, because it was cocked. The anti-beartrap device prevents uncocking it any other way. I just put a pellet in the breech and fired. As far as I could tell, it came out with about the same force as before. I didn’t chronograph it, nor do I intend to.

Now I want to talk about safety. As I have mentioned repeatedly, the B3 has a reputation for slipping off its sear and cutting off fingers that may be in the way of the sliding compression chamber closing. I held the underlever the entire time I did this work, to prevent an accident. The man in the video does not do this and it’s dangerous.

I do not recommend any of you doing what I have done. This is a redneck repair. However, it is shown on You Tube, and I thought it would be interesting to:

1. See how easy it is, and
2. See what affect it has on the rifle’s velocity.

The Chinese breech seals for air rifles with sliding compression chambers are little more than faucet washers anyhow. They are soft synthetics that don’t last that long.

Could this be considered a legitimate fix? No. I am not recommending that anyone fix an air rifle this way.

I will show you the rest of the repair, which should take me only a few more minutes once I have the part, then I will test the rifle’s velocity once again. We have a good baseline from my previous tests of the B3-1 ( Hobbys average 636 f.p.s.). Following that I plan to continue the test as usual.

Will I tear into this B3 and do the job right? That all depends on how accurate it is when I get it running again. If it’s accurate, I will consider spending the time to give it a real tune.