Part 1
A history of airguns

Before we begin, I want to share an email I received last Friday. It says a lot about the experience of attending the Pyramyd Air Cup.

Meeting you in person for me was one of the highlights of the Pyramid Air Cup 2018. I’m the tall guy shooting any tournament for the first time. I shot a TX200 and had questions about a second air rifle that weekend. We spoke about the Sig P938 and you recommended a Sig 365 you were testing. I wanted to give you my perspective of what I got out my first shoot and ask you to consider sharing my thoughts. Not the shoot but as a newcomer into competition.

I went with no intention of shooting only the hope I might be able to shoot or learn by watching. I had only had my rifle for a few weeks. Everywhere I turned people (fellow Shooters) were wanting to share their wisdom on what I was doing wrong. In every case this advise were things I never thought about. Things like placement of my equipment while sitting down to shoot, consistency on how I placed the riffle on the sticks, in what order I should prepare myself for each shot, waiting on the wind, using my elbows on my knees to hold more securely, improving my artillery hold with my springer, staying hydrated and nutrition to stay less shaky, how to practice before tournaments, just to name a few.

Bottom line is there is no way I could practice enough without the wonderful advice I got at my very first shoot. Now that I have this shoot under my belt I feel I’m prepared to increase my shooting skills at a rate that would be impossible without this first shoot. The 6 hour drive one way was the best investment in my new shooting quality I’ve ever made!

Something else I took away was that my equipment was more than capable of getting a respectable score. I’m the only thing holding me back. I did not have a sighting card to help me remember where to hold for the different distances. I did not understand how much drift my pellet had under different wind conditions. These things I never ever considered.  As I practice now I have a totally different mindset because of my experience which I almost didn’t get. On Friday night a shooter came up to me at the hotel parking lot I had met that morning and said to me “You Don’t Know What You Don’t Know. Get in there and Shoot no matter your preparedness or lack there of. You’ll learn how to practice.” Truer words could not have proven to be true.

I’m asking myself how I could help others to get in there and try it. The only thing I could think of is to write you, the most respected name in the air gun industry, and encourage others to  give it a go. Maybe encourage other shoot organizers to figure out a way to handle more newcomers who just show up like I did. I don’t know how to change things to make this happen but maybe you do.

Also I noticed that the Demo Equipment was made for newcomers into the air gun world. 95% of the people there had way more than $1,000.00 invested in their rifle setup. Why didn’t they have demo equipment to match their primary audience/clientele?

Thanks again for all you do for the air gun industry. I hope to run into you again.”

I responded to his questions and I also forwarded his message to the event organizers Tyler Patner and Kristen Koss,  and to Val Gamerman, the president of Pyramyd Air. This man is right when he says it is worth the long drive, because you will see things and learn things you cannot get from just reading the internet. I hope you take his remarks to heart. Okay, on to my report.

Today I will begin testing the velocity of the Sharpshooter rubber band catapult gun. I intend going into far more depth in this report series than normal, so this is just the start of velocity testing. And I am standing on the shoulders of a giant!

Back when my wife and I published Airgun Revue magazine, we had many guest writers. Dean Fletcher was one of them and he approached us about an article he wanted to write on the Sharpshooter pistols. We agreed and he gave us an in-depth look at not only the history of the guns, but also the possibilities for velocity and accuracy. I learned most of what I know from Dean’s research. 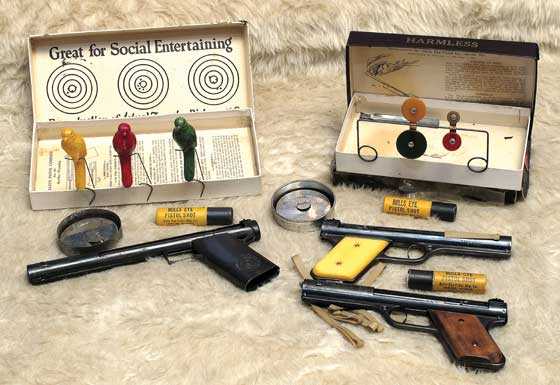 The Bulls Eye pistol on the left was the start of it all. From the mid ‘20s until 1940 this gun was sold as a package that’s seen here. You can compare the size to the shorter Sharpshooter pistols on the right.

I’m not going to report on everything about the Bulls Eye pistol because this article would quickly become too large. But it is a great place to begun talking about velocity. Fletcher discovered through experimentation that, by using multiple rubber bands to power the same type of catapult launcher that the Sharpshooter pistol has, the longer Bulls Eye pistol could get up to 195 f.p.s. for one number 6 birdshot. That was the fastest velocity he recorded. The average velocity for the gun set up that way, with 4 rubber bands powering the launcher, was 192 f.p.s. That should tell you how very consistent this type of gun is, and because of that I will be testing the Sharpshooter pistols differently. We don’t need 10-shot strings when the velocity seldom varies by three f.p.s.

Dr. Bunten also developed the first Sharpshooter pistol, which he sold from Rawlins, as well. Using the same testing regimen, Fletcher got a Sharpshooter pistol up to an average 158 f.p.s. when five rubber bands were used. He did multiple tests with different types of rubber bands and found that sometimes adding more bands decreased velocity. Here is my analogy. An M1 Abrams tank engine develops 1,500 horsepower, yet the tank cannot accelerate as fast nor go as fast as a Honda motorcycle that has only 20 horsepower. Acceleration and velocity depend on several things besides horsepower or the number of rubber bands.

Dean gave us a splendid graphic of the catapult launcher that explains how it works. Let’s look at it now. 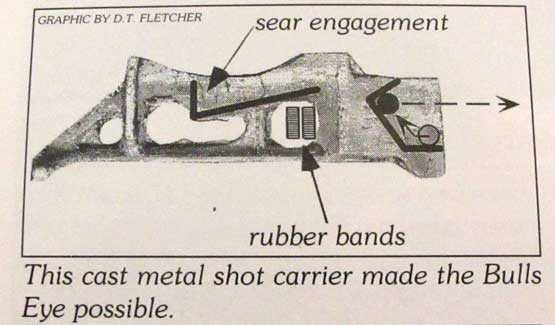 In the graphic, which I have enlarged, you can see how the shot climbs in its seat when the gun fires. That is a key to the accuracy.

It’s difficult to see in the graphic, but the “feet” of the launcher, front and rear, top and bottom, are curved to fit the rails they ride on. Here is a more detailed shot of an actual launcher. 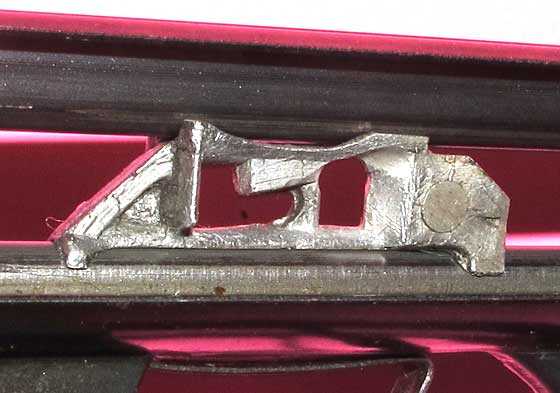 This image shows the cast metal launcher feet that grab the rails of the pistol, top and bottom.

The fit of the launcher to the rails can be controlled to a limited extent by spreading or squeezing the top rail away from or closer to the bottom rail. Of course the tighter the fit the greater the friction, and friction is an enemy of velocity. Here is another look at the rails from the muzzle end of the gun. 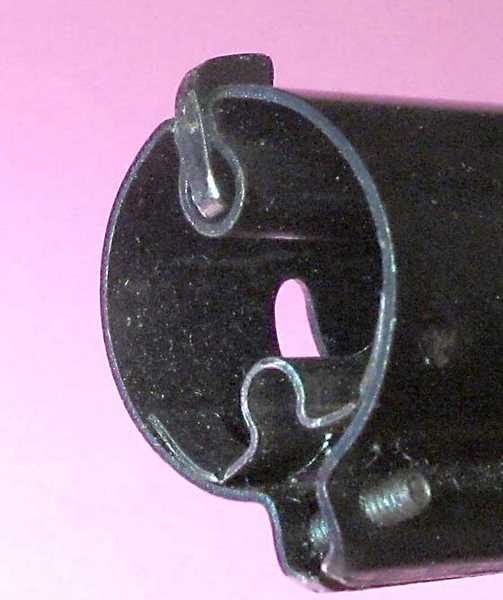 The rails are just folded metal attached to the inside of the pistol frame. The top rail where you see the front sight doubles as the shot magazine. 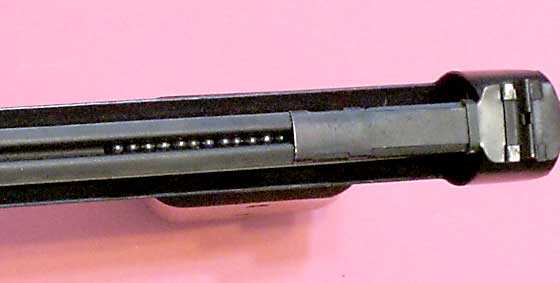 Looking down on the top of the pistol we see the shot magazine. It’s gravity feed. I showed this in Part 1 but the picture wasn’t that clear.

Now I’m going to get into the velocity test of one of my own Sharpshooter pistols. Because each pistol is unique, I will try to do all or most of the testing on one gun. We will call this gun the wooden-handled pistol.

We will begin by establishing a baseline velocity. Fletcher used up to five rubber bands on one gun in his tests, and, like I told you, more bands don’t always increase velocity. And there is something else to consider. There is limited space in the launcher for the rubber band to pass through. That’s one more limit on what you can do. 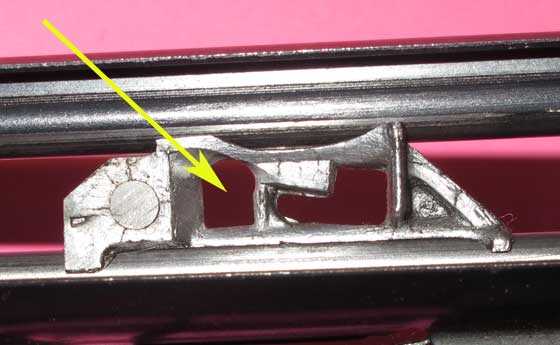 The hole for the rubber bands (arrow) limits the number of bands that can be used. The hole behind that one (on the right in this picture) won’t work because the bands will eventually rip out the thin zinc post between the two holes.

I will start testing with one band. And as I said, there is no need for a 10-shot string. One shot is really all it takes. But  I will take two shots this first time to demonstrate.

Satisfied? Okay, that was less velocity than I anticipated. I then removed the large fat band that was also too long and replaced it with first one and then two of the thinner, shorter bands. 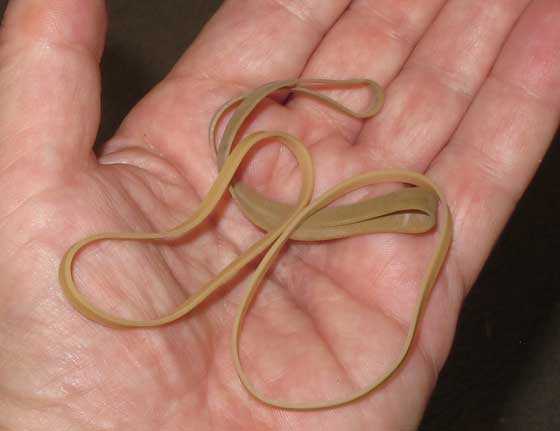 The one fat rubber band that’s curled up in this picture was replaced by one and then two of the smaller bands that lie on top.

Before I do that, though, let me tell you about the problems I had with the chronograph. Indoors it would not register these number 6 shot at all. The skyscreens are just not up to the job. The shot is less than .12 caliber in size and it is moving incredibly slow — two things that will stress your machine. I didn’t feel like setting up my Oehler 35P that always registers, so instead I took the Chrony outside.

The day was totally overcast, giving the skyscreens a bright gray background to look at. Almost every shot registered after that, including the two shown above. Now I’m ready to tell you about the two smaller rubber bands.

These are fresh rubber bands that have never need used before. That’s something that has to be taken into account.

I cannot detect any sound when the gun fires. I hear the shot hitting its target, but even that is quiet. This is a gun you can shoot anywhere without alarming anyone.

The trigger pull changes with the strength of the rubber bands. I didn’t measure it but it went from around 3 lbs. to over 6 lbs. in today’s test. That’s another reason for not adding more bands.

Accuracy? That’s not today! It’s not even next time, because we have more velocity testing to do. But I couldn’t resist taking one aimed shot. Suffice to say that if my target was a housefly, I would have got him!

Like I said I plan to test velocity more next time. The ammo stays the same but the number and type of rubber bands changes. And I also have another experiment to conduct that I hope will boost velocity without adding more bands. See if you can guess what it might be.