I said we would get deeper into the velocity of the Sharpshooter pistol this time, so that’s what will happen today. First I need to tell you that one of the two rubber bands I used for the velocity test last time broke, so I have to install another one today. Before I do that, though, I want to test my other velocity idea, which reader Paul in Liberty County correctly guessed was applying a dry lubricant to the gun. He thought it might be graphite, but I actually want to try powdered Molybdenum Disulfide.

People think oil will speed things up, but in most things on airguns, it doesn’t. It slows them down. Oil pellets or a bore and you can watch your velocities drop. Where oil speeds things up is in mechanisms that are completely dry. Oil will often speed up dry mechanisms, but the Sharpshooter guns are so weak that I’m not sure oil will help. So I want to try treating the two sliding rails with the powdered moly, to see what effect that has.

Since I don’t know which of the two rubber bands broke, I will retest the pistol as it now is, with just one band. Then I will rub moly powder into the rails, top and bottom, and test it again with the same band. Hopefully the band won’t break while I’m doing this! Let’s give it a try!

In the last report one rubber band gave a velocity of 60-61 f.p.s. But then I installed a second band and the velocity got up to 121 f.p.s. I finished the report at that point, but afterward I shot the gun some more and one of the two bands broke. So I’m starting today with one rubber band, but I don’t know if it’s the one band I tested the first time or the band I added. Only a test will tell.

Okay, it appears that the second band is the one that’s still on the gun. Now that we have a baseline of its velocity, what will happen when I rub moly powder into the rails?

I used a cotton swab to rub moly powder into the rails, top and bottom. I took a “before” picture in case you could see a difference afterward, but after I finished rubbing the powder in there was and still is no visible difference. Let’s see what that did for the velocity. 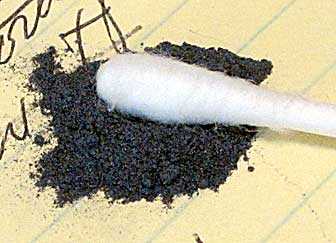 Fine Molybdenum Disulfide powder was burnished into the steel rails with a cotton swab. They looked the same after this was done.

Wouldn’t you know it, the rubber band broke as I was cocking the gun for the second shot. Now we have a gun that we must consider lubed from this point on. Moly bonds with steel and I imagine with other metals to give a low friction surface for a very long time.

To look at the one shot that was recorded, the moly did increase the velocity by a small amount (73 to 76 f.p.s.), but not enough to be very significant. Had it gained 10 f.p.s. I would call it significant, but 3 f.p.s. is a gain of only 4 percent over the unlubed velocity.

Let’s add another rubber band and test velocity again. Remember, from this point on, the gun has been lubricated.

The gain from a second band is significant (36 f.p.s.) but it’s less than we saw in the last test of two bands on an unlubed gun (121 f.p.s.). That tells me the individual rubber bands are far more significant to velocity than lubing the rails. Let’s add a third rubber band and see what happens.

This test is with three rubber bands and a lubricated gun.

With three rubber bands the gun is getting crowded. Also, cocking is very difficult.

The velocity increased by about 23 f.p.s. While that’s also signifiant, it is less than the increase I got going from one band to two (36 f.p.s.). And the cocking effort increased so much with 3 bands that I started to worry about the gun holding together.

I’m not adding more rubber bands to the gun. This is such a fine old gun that I don’t want to test to destruction. Dean Fletcher told us he got 158 f.p.s. from 5 rubber bands on a Sharpshooter, so let’s just take his word for it. Maybe with clever work you can get a Sharpshooter up to as much as 200 f.p.s. but no matter what you do it will never be a magnum airgun.

Instead, I tried it with a different type of rubber band. Several readers discussed how a red rubber band was the most powerful. Well, I searched my office and didn’t find any red ones, plus the local Office Depot store only sells different sizes of the same Chinese-made brown bands I have been using. But I did find a wide yellow band in my desk that came wrapped around some organic produce. So I tried that.

This big yellow band is different enough to try. 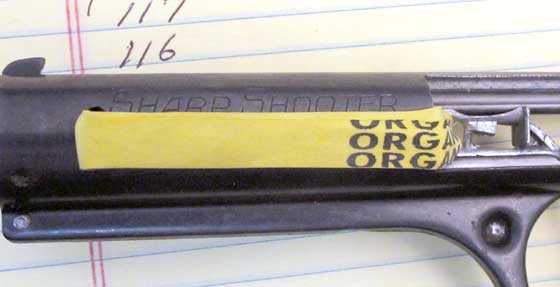 The yellow band is a big one.

Well this one band is about as powerful as two smaller bands. It also cocks easily. I will try to keep this one working as long as possible. The gun now cocks easily and gets decent velocity. It’s fun to shoot this way.

I can draw several conclusions from today’s testing. The first is obvious — the Sharpshooter becomes more powerful when more rubber bands are used. This particular gun, though, seems to be hard on the bands. They don’t have a long life. I think there is a sharp edge somewhere that’s cutting them as they are stretched.

The next conclusion is one I haven’t mentioned yet, but I saw it as I was looking for different rubber bands. They have a shelf life. At least the bands I am using do. As they age they get brittle and crack until they are completely useless. That means a fresh band is the best and I think it also means bands wear out whether you use them or not. So, don’t get attached to a band, because it won’t be around for long.

Another conclusion is that as bands are added the gun quickly becomes much harder to cock and shoot. The trigger also becomes very hard to pull. I stopped testing at 3 bands, but for target shooting even that is too much. The lightweight gun can’t be controlled when the trigger is too heavy.

I also discovered that dry lubrication doesn’t make much difference. It isn’t bad, but it doesn’t add much and probably isn’t worth the effort. I think the zinc pot metal rubbing against the steel rails probably has some self-lubrication of its own.

I like the way gun works with the yellow rubber band installed. I hope it will last awhile. I have tried the pistol at close range (18 inches) and it is extremely accurate. I know you are thinking that it should be accurate  when it’s that close, but that distance matches the small scale of the gun. If I were shooting houseflies, that’s the distance I would do it at. We shall see in the next test, which will be accuracy.